The Grand Release, patch, version 1.71 is now downloadable today on MOD DB! Mirrors will be posted eventually today after the UA mod team wakes up from their sleep. We introduce today huge bug fixes for all races and everything in general version 1.7 didn't contain. We are very sorry for that, but in version 1.71, you get stuff like this... 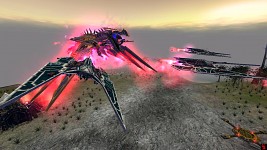 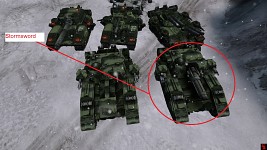 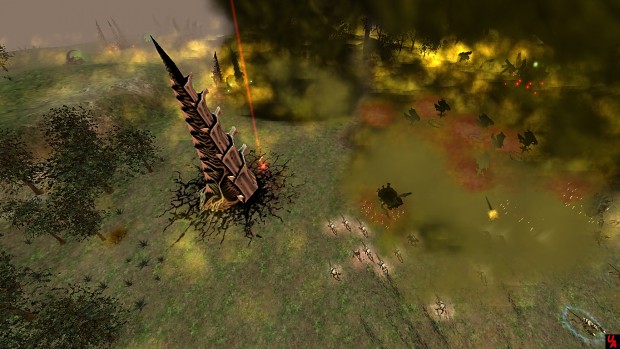 and more, of course. Please get this version!!! Version 1.71 is much better than version 1.7. Also, when you are done, please report feedback ASAP, here on our forum.

For any questions, please visit our Frequently Asked Questions, and remember to report feedback for improvement. Have fun, kick butt, and enjoy version 1.71.

Note: The below "Download Now" button is for version 1.7, please get version 1.71, here. Mirrors will come.

------------------------
Necrons:
------------------------
* Starting resources were increased to 350 power.
* Attack Scarabs are now free to produce but are time consuming to recruit.
* Builder Scarabs cost time was decreased.
* AI is now more of a challenge.
* Necron HQ has been given the homeworld portal ability.
* Homeworld Portal now requires only the tier 4 research.
* Necron Heavy Destroyer's weapon sound decreased in volume and was remade.
* Sterilization Beacons now only requires tier 4. Every structure build increases its cost by 100 power.
* Void Dragon global ability no longer effects relic unit vehicles.
* All tooltips mentioning the Triolith are cured.
* Monoliths can now be built outside of control radiuses.
* The control radius of the Necron HQ increased.
* Annihilator radiation cloud aftermath effect has now reduced damage against builder units.

I'm getting a giant pink square telling me "bad model" instead of the doomed ones model in the army painter (race: Chaos Daemons). Not tested in-game but they'll most probably not appear either. Looked in the mod directories and the model itself is nowhere to be found. Maybe it's just an installation problem on my side after updating the mod to 1.71 and daemons to 0.96, anyone else having the same problem?

Spectacular mod, by the way, it's so big I won't probably need any other strategy game for years to come. ^^

Seriously now: AWESOME update, my only complain is reducing the LP weapon ranges, it was already kind of short imo (with the exception of the sisters one ofc). That and: Space Marines "Campaign Man" was removed from game. You mean... the ultimate game breaker WAS in-game?!
ohhhh, that would have been lots of CHEESE

Tell that to the other six people who wanted the LP ranges decreased and fixed. ^^ At least the Sisters everybody mentioned. But yep, version 1.7 contained a super duper ultimate unstoppable character that lays waste to even Primarches. ^^

Just a tad bit reduced, not overly. Still have to deal with those Titans that could knock posts out from afar - so if the listening post cant handle it then what measures to defend the base from IG jumbo size tanks, Monoliths, nut bar players requests ect.?

I installed the update, and noticed that Campaign Man is still there in the Arena levels even though he was supposedly removed. Also, the game just closes if I try to select the Kaurava Campaign...

i think the Necron are now abit too much of a challange in AI, i played a match of 6 easy ai and they crushed everything, that was not easy ai at all xD

campaign m1 works, m2 is pretty much black... still working on that bit??
i dont know about the above mentioned closing when loading the kaurava game, i had it once but worked second time round, only problem with that is there seem to be no win conditions... i just slapped some orks around and cleaned out the map. no victory =[
oh ye Lord_Doofus, the tau piranhas still make a dreadful constant noise u can hear all over the map... fix please?? =]

how do i install this just copy it in the main folder (after extracting first) and allow any replacement? thnx in advance :)

ye just copy the lot over and replace it all (should say something like move and replace files) load game, if it says blah blah blah UA 1.71 at the top left, your good =]

After playing for a few days and experimenting with both 1.7 and 1.71 the AI difficulty certainly is ridiculously challenging due to 2 factors

1. I took 7 squads of 10 Chaos space marines per squad to assault an imperial guard base within the first 5 mins of the game starting, after destroying half their base, including buildings required for basic tier research were they able to mass vulture gunships and titans 2-3 mins later. (Fog of war is turned off so I can track AI patterns and strategies) This was on Standard difficulty

2. Lack of power resource (glitch possibly?) 1 generator = 15 power 6 generators = 60 power and with max power upgrades should bring you to around 110-120 production rate keeping up with requisition. In my recent update to 1.71 I have a hard time managing power as I only cap out at 36 power with no generator decay making it extremely difficult to progress through tiers and produce vehicles. Not sure if having allies decreases the production rate or specified race.

hey guys, but the patch 1.2 for play in game spy arcade, make problem with the UAmod?

Is it me or did you just broke the "delete" key (kill selected own unit) with this mod? If no, what could have happend that my "delete" does not work in-game (it does work normally).

have you guys ever thought about releasing the survivor maps for skirmishes? some of those things are pretty cool.
plus i don't know if the zombie mode and grey knights are yours or another mods toys, but i have a few ideas that might make zombies more interesting and knights more enjoyable. you interested?

Quick question. Is there any way to get rid of the "fog"? I don't mean fog of war, but when I zoom out more than was allowed in normal game everything gets covered by fog and I can't see a damn thing..

question for creator of this mode, what is your favorite race in dow ua