We're coming up on the 11th anniversary of Thrawn's Revenge in June, so we decided to become narcissists and do a few things about ourselves. We'll have some actual mod news coming out very soon for both Imperial Civil War and Ascendancy, but first here's a historical infographic with important date's in the mod's development. There's one or two bits of other relevant information you might not be aware of in there, too. Enjoy.

We're coming up on the 11th anniversary of Thrawn's Revenge in June, so we decided to become narcissists and do a few things about ourselves. We'll have some actual mod news coming out very soon for both Imperial Civil War and Ascendancy, but first here's a historical infographic with important date's in the mod's development. There's one or two bits of other relevant information you might not be aware of in there, too. 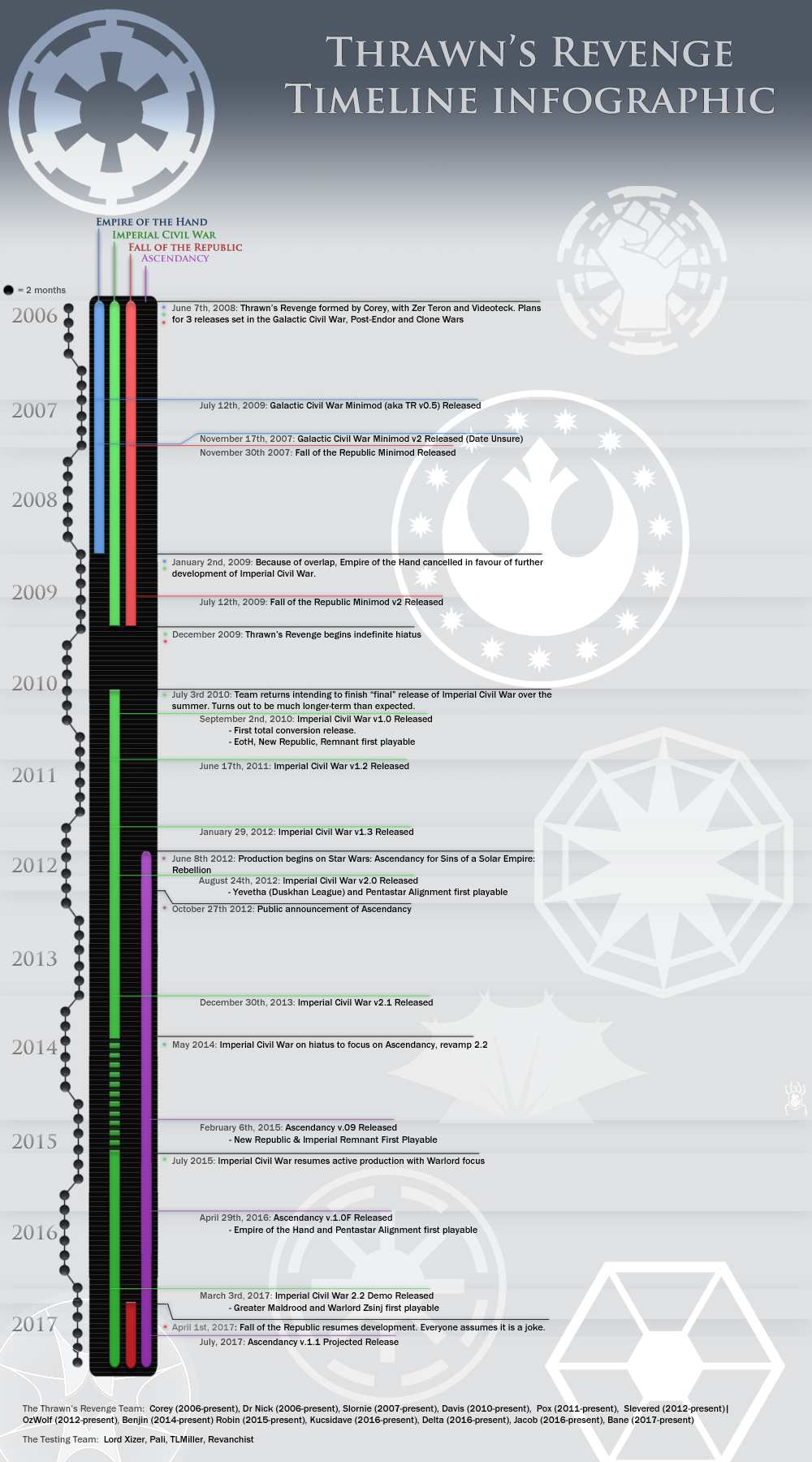 Thats quite far till the next update but i can wait for such an amazing mod. Keep it up this is my top favorite mod and i see only good things for it.

If you mean Ascendancy in July, that's not too far. If you mean not seeing a release for ICW, that just because the only future stuff we put on were things we were pretty sure on a ballpark for. Would probably have been more accurate to just cut off the rest of 2017, so don't read too much into that.

Ok but whens the Fall of the Republic releasing?

Some time after 2.2. We haven't even done a proper announcement for it, nowhere near giving a release date.

We've been bamboozled it seems. A pleasant bamboozling, though.

Could have sworn one of your team people said you hated republic era stuff at one point.

The more I thought about it over the years, the more I realised it wasn't the Clone Wars I hated, it was the cloan warz fanboys.

I feel this in so many ways...

What are you guys planing for FotR?

Were you still planning on making a stellaris mod? there was an announcement a while back but i havnt heard anything about it since.

We were planning to do ship packs, but after we said we were gonna a bunch of SW content was released by other people. It's still on my radar, it's not super necessary anymore.

I've only been following your mods for about a year, so this was very interesting to see. It's amazing how far you've pushed the EaW engine.

Whoa!
It's a long time I'm player of your great mods, but it seems it's only about half time of you mod making history. Same day I heard about Ascendancy, I Bought Sins of Solar Empire espacially for it,and I'm not dissapointed, you are doing fantastic job guys, hope I could help you with something but my programming skills are too low for now, so only thing I can do for you is keeping my fingers crossed for you, and keep advertising you to all of my friends.

WOW, what new changes are in fall of the republic?

"Fall of Republic resumes development. Everyone assumes it was a joke"

STOP PLAYING WITH MY EMOTIONS!

There was a GCW minimod? I've seen the FOTR minimod, but not the other one.

it was really old, and never went anywhere

Corey's spent at least the last seven years denying its existence, so it's not really a surprise few know about it.

What are the odds of seeing any of the following in ICW? Just curious, no particular attachment to any of these ideas. And most of these models exist for other mods.
--Imperial Raider Class Corvette (From X-Wing board game)
--TIE Defender, Phantom, Punisher, Striker, and/or Scout
--ETA-2 Interceptor as an elite Imperial fighter (its in legends)
--BTL-B Y-Wing for some of the warlord factions (Clone Wars)
--More types of Droids and separatist ships for the factions that use them
--The smaller Death Star Prototype commanded by Tol Sivron
--New Planets like Eadu, Lothal, Jakku, etc...
--Factions for the Hutt clan and/or Mandalore

And lastly, no one kill me for this, adding information from the 'new canon' to create another small Imperial splinter group, The First Order, or at least an EU version of it. They would be in the outer rim near the Empire of the Hand/Chiss Ascendancy according to the new lore, as well as controlling Jakku. They would have the following new characters, Counselor to the Empire Gallius Rex, Grand Admiral Rae Sloane aboard the SSD Eclipse, Commandant Brendol Hux, Iden Versio of Inferno Squad and Supreme Leader Snoke.

Now don't get me wrong, I am not exactly a fan of the 'new canon', I adored the Heir to the Empire series and I love what you guys have done making this amazing mod. I just always hunger for more factions in a civil/succession war this big.