Firstly, listen to this while you read. Shadow of Chernobyl veterans should be going into nostalgia mode!

Well, here we are!
Eight months, many, many hours and plenty of blood, sweat and tears later!

I’m very happy to announce that I’m ready to release S.T.A.L.K.E.R. Call of Pripyat: Redux v1.0 to you, the mod-hungry public!

After a very productive beta-testing period (I once again thank my testers for their hard work and dedication, especially those who submitted copious amounts of feedback!) I believe Redux is now at the stage where I’m comfortable releasing it publicly!

Redux has gone through quite a lot of changes during its development - I originally never intended to even release the mod, but as it has grown and I’ve added feature after feature, I realised it would be silly not to let you guys play it!

I’ve also wondered whether it was wise to release Redux v0.8 a few months back, as compared to the current version, v0.8 is hardly even deserving of the name. That said, I believe a lot of valuable issues were raised and worked through, and v1.0 is much, much better for it!

And so, without further ado, I present; Redux v1.0. 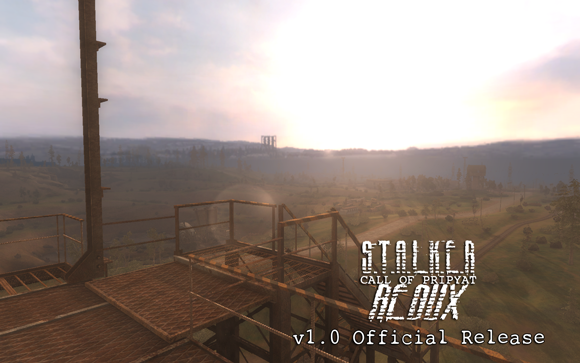 The full v1.0 Feature List as of release can be found here.

And MUCH, MUCH more - seriously, check out the features list.

For those of you with limited bandwidth, super-slow internet or just not wanting anything but the regular experience, Redux Base may be what you need!


Redux Base includes everything but the weighty graphical enhancements available in the alternative package! Check out the feature list above for what’s included (and what’s missed out!)


Included in the easy-to-use installer are the following optional extras:

All of these options are properly integrated with the base Redux package, meaning flawless compatibility and performance!

If you would like to leave comments or suggestions regarding Redux, or if you want to submit a bug report/technical issue, please do so on the official forums.

Even though I’ve done everything I can to reduce the likelihood of bugs or crashes, they may still occur.
Please make sure you follow the instructions on how to submit a crash report as shown in the stickied thread in the official forums, so that I can quickly diagnose and fix any problems!

What’s next for Redux?

As feedback starts to come in I’ll work on fixing any issues that may arise (hopefully not many!) and getting patches out when needed.

After that, depending on how well v1.0 is received, I may start working on v2.0! (Though likely after a break, a different project perhaps)

If you like the sound of these, let me know! Encouragement may well get me more motivated to do these things!

Please make sure to read the ReadMe.txt included with the installer - it contains useful information, important things to know about the current version regarding possible bugs, as well as a full credits list to those kind enough to help me out or contribute something to the mod.

Finally, thank-you to everyone who has commented, suggested, helped, encouraged or challenged me and the mod - without you guys, who knows where Redux would be now?

I hope you enjoy the mod!

this mod sounds awesome ,i hope u guys can get v2.0 i would love to try out new missions ,and try and see all the new goodies u guys have in store for us keep up the good work ,stalker is prob one of the scariest games ever :)

You really should play through vanilla first! :D

Alright, good job.
I just beat the game using a different mod though, Can someone please, PLEASE post a savegame from some point in the late game, or better yet in the post game free play?

You won't be able to use previous save-games with Redux I'm afraid. A new game is required.

Love your mod by the way!

Clicking the "DOWNLOAD" text for full version gives me "you don't have permission to edit this file"... the link also has "edit" in it.

Congrats on the 1.0 release!

You may need to go to the downloads page directly, for some reason.

Wow, might just replay this soon. Vanilla was fun for a couple of hours, in the dark, but once I got the hang of artifact hunting and noticed I had a stockpile worthy of a small army the game became just another 'sandbox' shooter.

A quick question, does the game save the game time or does it use the windows clock? Nevermind, I forgot the rest option, making both systems moot.

Been looking forward to this, to be truthfull i was doing a little modding a while back but set it aside as i found my goals to be very similar to redux. Im sure it was worth the wait, and congratulations to you on the 1.0 release

I'm sorry. This mod seems great, but I've installed it several times, both full and base only, and it keep crashing on me on different occassions. Often even my system crashes and reboots. I have even reinstalled the entire game a couple of times as well.

This happens in-game or in the game menu. I did manage to play for about 20 minutes once, but it crashed again after I'd ambushed the bandits at the stalker camp.

I'm not sure what it depends on, but I suspect either my motherboard or my Memory, which I resently purchased, and I've had some troubles with them before.

Any one know a good software to record the status of my memory and processor during the crash?

This sounds like a problem with your PC mate, it should never make your entire PC crash.

hm.. reading the change logs,
the fact that there's no suit upgrade kind of worries me, especially with beefed up difficulty.
I mean if this mod has the same load out from the start like vanilla
(sunrise body armor, Honorable Markarov. etc etc) that POS
sunrise armor is gonna kill you pretty quick in a firefight :P
unless you changed the stats on armor

Well, I liked the original COP, and this just enhances the experience. The realism is well received although it fells overpowered some times.

My main complaint is about those stupid blind dogs, they can kill you with 3 bites when you just began playing the game, and you gotta empty a whole clip on them sometimes, lowering their health would be nice. Atmosphear also has a few bugs, for example, the weather was all foggy, you can't anything 10 meters away from you, still, a few stalkers opened fire against some mutants that I even didn't see, should be fixed the effects the weather has over NPCs.

The weight cap should be slightly increased, although anyone can just manually do that anyway.

Rework the hunger icon, it is just a small colored ball, took me a long time to realize I could barely run because I was starving.

This mod seriously needs some time spending item, like the sleeping bag from the COMPLETE series, sometimes you're inside a building, mutants outside, it just doesn't seems like you can leave the place guns blazing, a item that would let you wait for X hours would be usefull.

The only problems with this mod are:

-the crouching speed is awfully slow
-the NPCs can see a bit too far (not the biggest problem)
-the stashes (yes, i know you planning a new system, i just cant wait it :))
-some quests a little buggy, like the Bloodsucker Lair, attacking the bandits in Ranger Station, walking to the sniping spot through the zombies (they see me almost every time)
-You should make the new foods giveable to the mercenaries
-sometimes im in a safe zone during an emission but i die

-the new consumable and healing items
-the weapon variants (i didnt liked the upgrade system)
-the new ammo
-that you alway low on ammo
.
.
.
so everything else in this mod :)

im getting crashes too. finding i die way too easily at beginning of game.

News flash: Stalker 2 has been officially announced as dead by GSC, they have reforemed as Vostok games and are currently working on a project known as Survarium, a free-to-play MMOFPS.