We on the Twisted Insurrection team have been working hard constantly, even after the release of TI's Second Public Beta. Check out this update to get a glimpse at a few of the many, many things you will be seeing in our next release.

Contrary to what you may see in the public sections, there is always a lot going on behind the scenes, be it in the Staff Forums or on our desktops. Recently plenty of different jobs have been getting done and ticked off of our to-do-list. For example, the long awaited Nod Challenge 01 is finally complete and will be included in the next Public Patch / Release, and so will many new campaign missions. 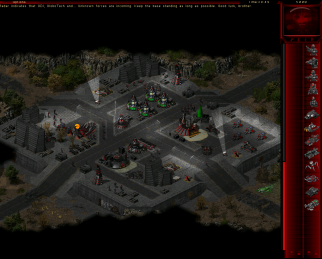 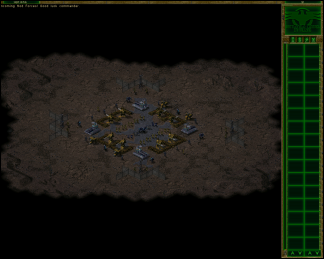 (Click on the images to view them in actual size)

Alongside much of the campaign and mapping work, Including the new multiplayer maps Pentagram Redux (2-4), Sigma City (2-4), Between a Rock... (2-3) and Tournament Island (2-4)* there has been a lot of terrain, building and voxel work going on too. Many of you may of already seen the new Nod S.A.M. Bunker, but for those of you who haven't, here is a look of the second most powerful anti-aircraft defense structure in the game.

*: Tournament Island (2-4) is not shown publicly as of yet, but is complete.

And as mentioned above, plenty of voxel work has been done on both old and new voxels. The Twisted Dawn vehicles are extremely close to completion, there are only 3 units missing (Chinook, SSM Launcher and Apache), two of which are already close to completion. These units will all appear in the Nod and GDI campaigns during the older time period and flashback missions. These fantastic voxels were put together by Twisted Insurrection's leading Voxel Artist, ErastusMercy, and the Beautifully made M.C.V. and Harvester were put together by another one of our voxel artists, Shin.Peter.Pan. Here is a preview of the Twisted Dawn units together. Note that the Nod Artillery will be resized. 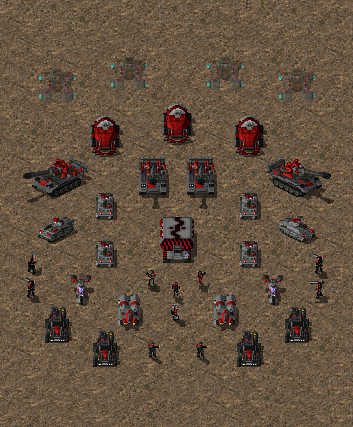 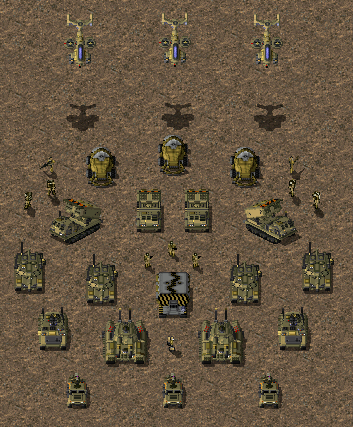 And there is much, much more to be shown, such as new GDI structures, new terrain and civilian features, Interior Theater additions and some work in Progress maps and campaign missions, all of which will be revealed in due time. Campaign missions however will not be shown publicly in order to prevent spoilers and walk-throughs, you will have to explore the campaign yourself. 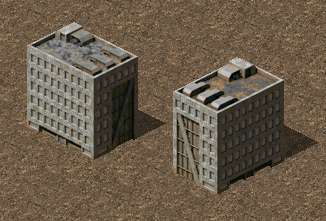 Quick question: is it possible to do high-definition voxel models in the Tiberian Sun engine? That is to say, is it possible to create voxels which could rival a DX9 polygon model? The reason I'm asking is since the baseline for computers nowadays is a bit higher than when Tiberian Sun was released, I would imagine you could push the voxel model's details to a far greater extent than in the original game.

Voxels are very limited and I'm afraid there isn't much we can do about the way they are rendered in Tiberian Sun, but Twisted Insurrection has some talented voxel artists whom can produce work which is far greater than that of the voxel standards in Tiberian Sun and Red Alert 2 which makes up for the way the game renders them.

I realize what I'm about to ask isn't going to be a possibility (and if so, it probably wouldn't show up until TI v2.0 or v3.0), but has the Twisted Insurrection team considered code injection or some other way which wouldn't require access to the source code of Tiberium Sun to modify the engine? Although I could imagine - if this were possible, of course - this would open up a plethora of new directions you could take TI in, both graphically and gameplay-wise, you'd need to hire additional team members willing to dabble in such things.

However, with that said, I do agree with you on the amazing work your voxel artists have done - these ain't your normal, uber-low-fidelity Tiberium Sun voxel units, no sir! They're packed with features, look GREAT, and are, from my observations of other Tiberium Sun mods/total conversions, a unique accomplishment!

Code injection still requires knowledge of the program's code. CCHyper is currently working on a system which would allow us to edit the game more easily by injecting C++ DLLs to it, but the project will likely take a few years to complete.

No, unforunatly tiberium sun cannot have amazingly detailed models as the engine dosn't have the juice. :( Thats not to say we havn't made them better than they were originaly though! :)

I like the fire animation for the SAM Bunker, it's different.

As well as the resize on the artillery, I am sure it'll be great. =)

I guess I have nothing else to say except GDI civilian structures finally? xD

The SAM Bunker's weapon makes me think of the Ancient's drones from Stargate.

Yes, you're right, without smoke the missiles really look like Ancient's drones from Stargate...
I hope they are not as powerfull as them because my orcas would be destroyed in seconds...;)
You've done a great job.
P.S: Can't wait to see Twisted Dawn mode...

I thought that exactly when I first saw it.

Those Tiberium Dawn units are going to appeare in the campaign, right?

In some campaign and Challenge missions, and then there will be a special Twisted Dawn multiplayer gamemode where you use these instead of the TI units.

Those Dawn units are hardcore.

Pop quiz: How many campaign missions you guys are planing to make in total?

As many as possible.