Posted by PityPleaseTheGame on Sep 25th, 2021

It's quite surprising how much can change between the numbers four and five. For some situations it may be the last hour of a 9-5 day at work, while in other cases it could mean going from reading an indie developer's 2D sprite based game devlog, to a fully 3D game devlog. Yes, Pity Please! is now a fully 3D isometric homeless survival strategy game!

So in devlog number four, we told you how we did a code simplification pass. It was a lot of work, and helped us a lot when we had to refactor all of our systems that were originally expecting to work with only two dimensions, suddenly got thrown an extra vector that it was never expecting. The Godot Engine's 3D capabilities enables us to provide a 3D game experience while still allowing us to remain committed to bringing a unified experience to both PC and mobile gamers, and we are really excited about that!

With the old 2D version of the Island, our buildings, trees, plants, objects, and vehicles were all created in Blender 3D, and then exported as 2D isometric sprites. Our roads, sidewalks, paths, and other such ground tiles were all tiny 2D sprites. These had to be converted into 3D planes with materials, and the buildings which had a lot of details omitted due to the original 2D design, had to be modelled and then properly travel through the pipeline from Blender to Godot. Now that we have full 3D models, we can get some great visual features like dynamic shadows!

Here are some of the buildings that have been converted to full 3D and brought into Godot. 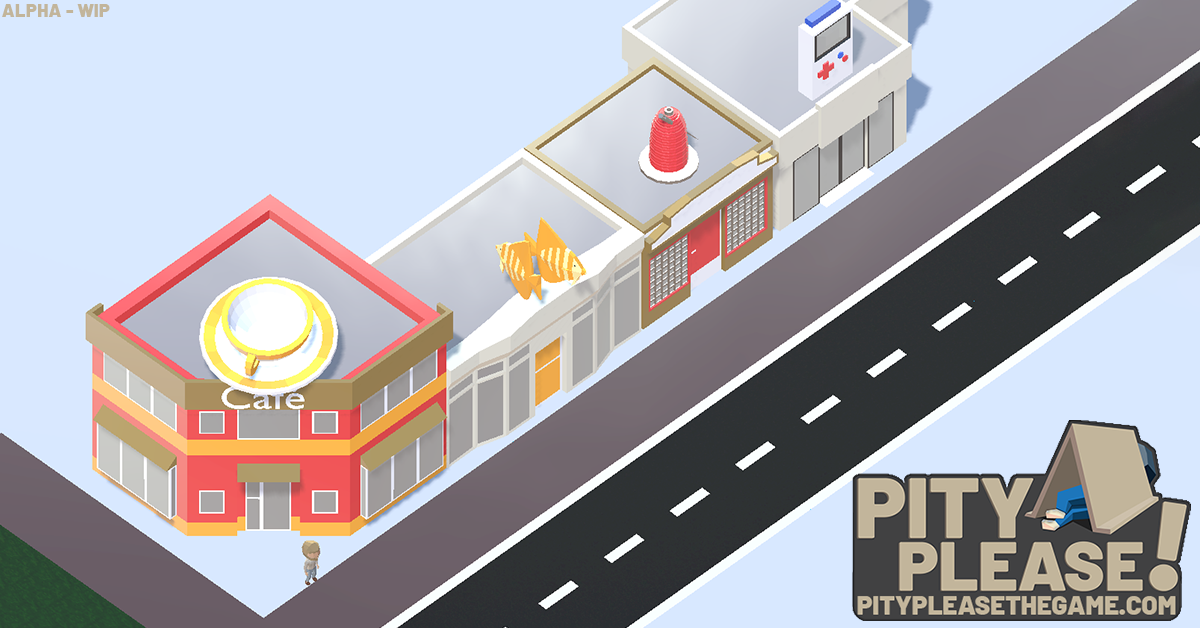 Below is the 3D Island without any buildings, to give you a sense of the island's very important road and path network!

Everything Isn't So Static Anymore!

We have added some basic character animations for the most common actions! Some of these include a walk, idle, give/take, and talking animations.

We have also created a custom water shader that brings an extra bit of life and movement to the island of Blessland.

Movement in Pity Please! works on a grid, and each character moves one grid space at a time. Each action takes time and costs stamina, and everyone is on their own turn time clock which results in a more or less real time environment, but emphasizes planning and strategic movements. If you don't plan how you will use your stamina, you're going to have a bad time. This is a strategy game after all!

We have been putting a lot of effort into our open world's lore and quests. We have completed the major plot lines of our story for the first beta. We are currently working on getting the dialog finished as each quest will have a meaningful impact on the world, based on how you choose or to complete, or not complete them!

That concludes Devlog #5, thanks for reading!