Another updates for NProject Mod. This time mostly for GLA factions.

It's being more busy lately. Exams come near, so does holiday. :P
There's much changes applied in my current mod build from the last release. As the time for Version 2.7 come closer, it's now being cooked and just wait for it being prepared. :)

Well, now it's time for another update. You might noticed there's no much visual updates lately. That's because most changes are minor bug fixes or balance related. Okay, here's the updates that I can show you from the last update article. 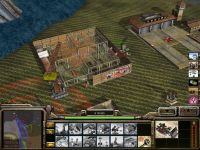 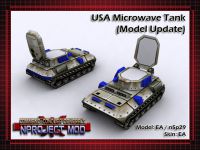 Some updates and improvements on Microwave Tank model. Nothing much changed, eh? Look closer.

Due to many complaints from our consumers about our microwave product which have dangerous microwave leakings to any nearby infantry including the users, we are offering a solution to prevent this problem.

Img412.imageshack.us
Now the new Microwave Tank lid can be closed. While it's not necessary to irradiate the surrounding areas, just close the lid to prevent the leaks.

Trade your old Microwave Tank with the new one now! And if you preorder now, you will get the special edition with turnable turret and a vehicle disabler beam gun.
Img405.imageshack.us

So, what are you waiting for? 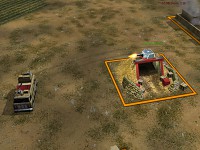 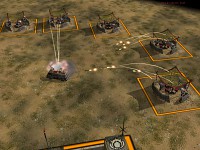 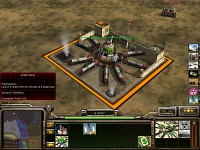 Well, sit back and relax, take a quick tour of these buildings in this video:

Awesome - great update, thanks! This is one ROCKSOLID mod, hombre - could maybe use it to plug that leak in the Gulf!

That microwave tank, with the additions? - BADASS. I don't think I've *ever* seen anyone do that! Esp. to the 'wave tank!

Only suggestion (& it's a small one) would be, the AI generally will not build again after it's been hammered once or twice - IDK if this is in the coding or not, but it would be nice to have the Contra 005 (not 006/007) AI and this mod together - talk about sweatin' it out...the AI does battle like a mofo at first, but hit 'em a few times, and they pretty much almost never rebuild defenses (which they don't build much anyway), and the game pretty much winds down rapidly after that. It's smart, but the paths the AI uses...well, it just seems like the Contra AI used almost every path it could to get to you, and in particular, would almost always come in your backdoor (if you left one open, which after the first time you get slaughtered, you never do again!) - yeh, i know, 'then play Contra!', but the crashing, man, the CRASHING...

Either way, incredible job - plays like CnC:ZH never did before! Love it, just wish it was a bit harder.

the common reason why AI stops attacking after a while:
- they're running out of money
- some team attack member can't be built or haven't built yet (especially with unlockable units), so they won't start the attack
- the attack wave time limit expires, so the teams just sits in the base and not being used to attack for some times
- there's no factories left so they can't build forces
- unavoidable scripting error by the engine, this one that may cause the game crashes

the first 4 can be fixed through scripting, but for the last one there's nothing modders can do (blame the engine :P).

oohhh sorry I was talking to N5P29

artillery like Inferno Cannon not fits for Stealth General because he's all about fast attacks and hit'n'run.