We talk about what the Foxhole dev team is working on including new faction insignia, the field machine gun, and more!

We're finally in the last stages of designing new insignia for each faction. You wouldn't think it, but this has actually been one of the hardest visual design challenges we've had since the start of the project. The only thing that has been more difficult to concept thus far has been the updated character designs. Julian concepted well over 100 different logos throughout a process that has lasted for months. At one point we had to take a long break from heraldry design to overcome the design block we were facing.

Overall, we're very happy with the final result and we're going to be introducing these new logos into the game very soon, along side the new character models. Both factions should feel visually refreshed once this is done. 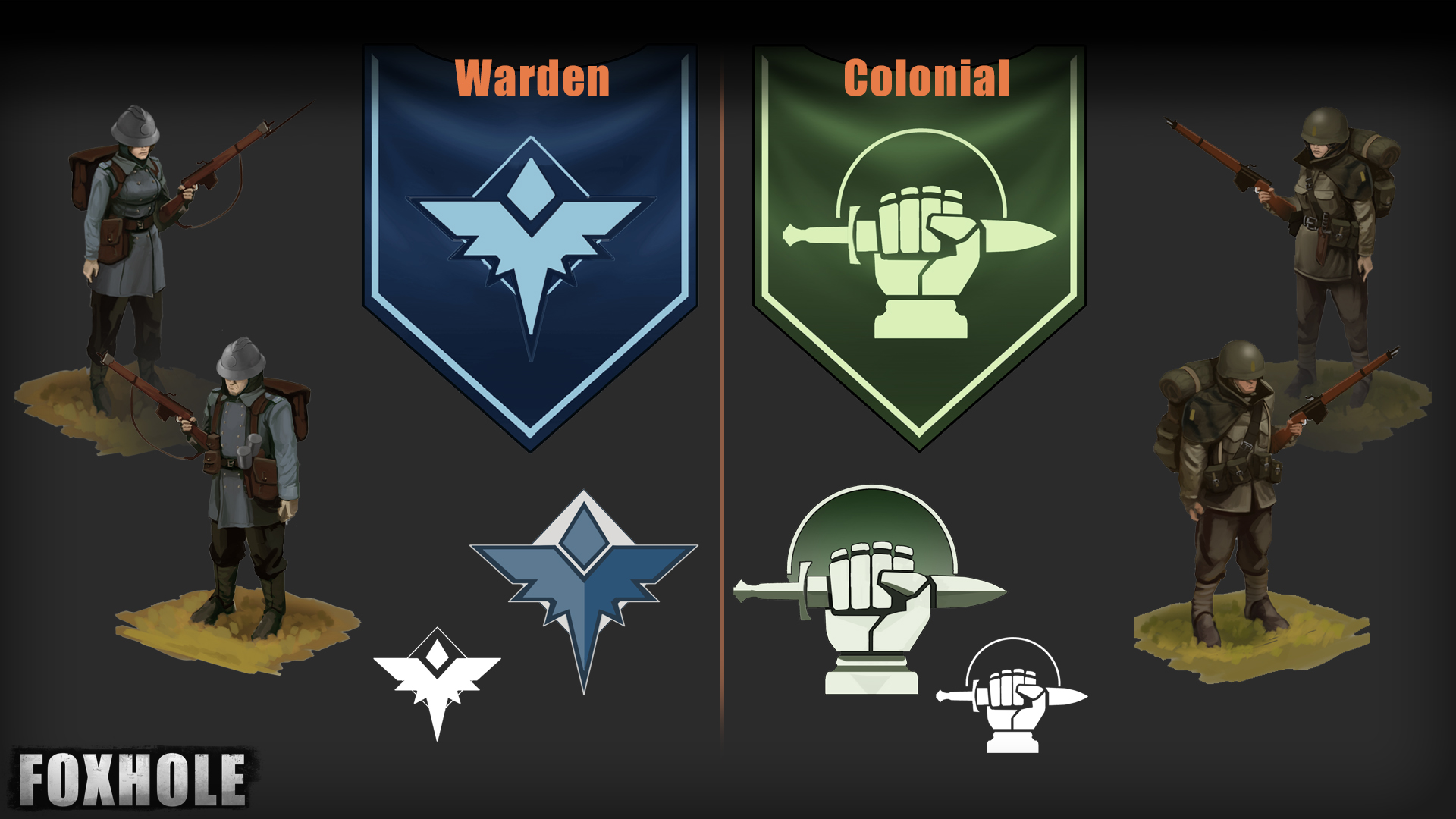 Side by side of the new faction insignia 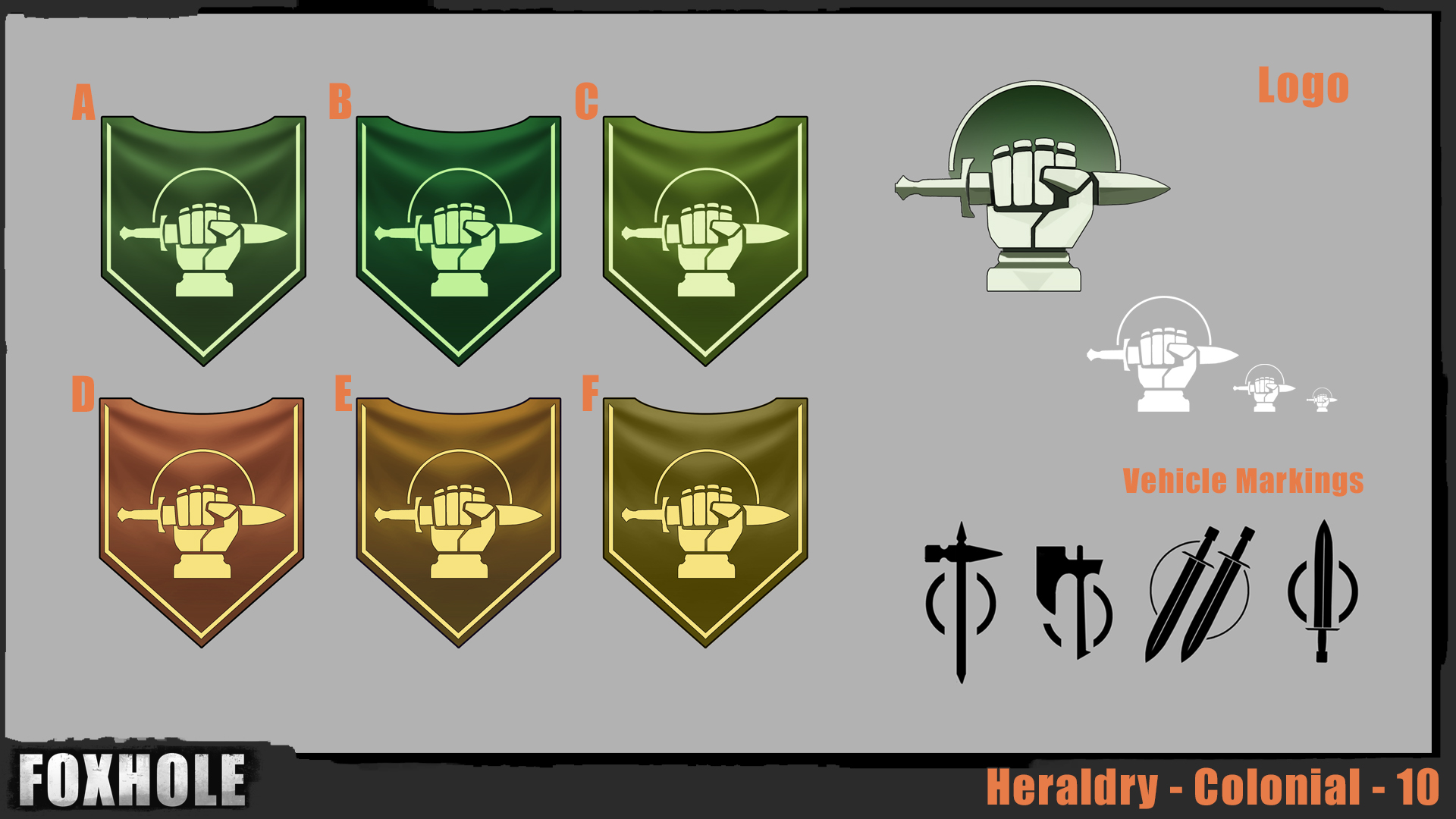 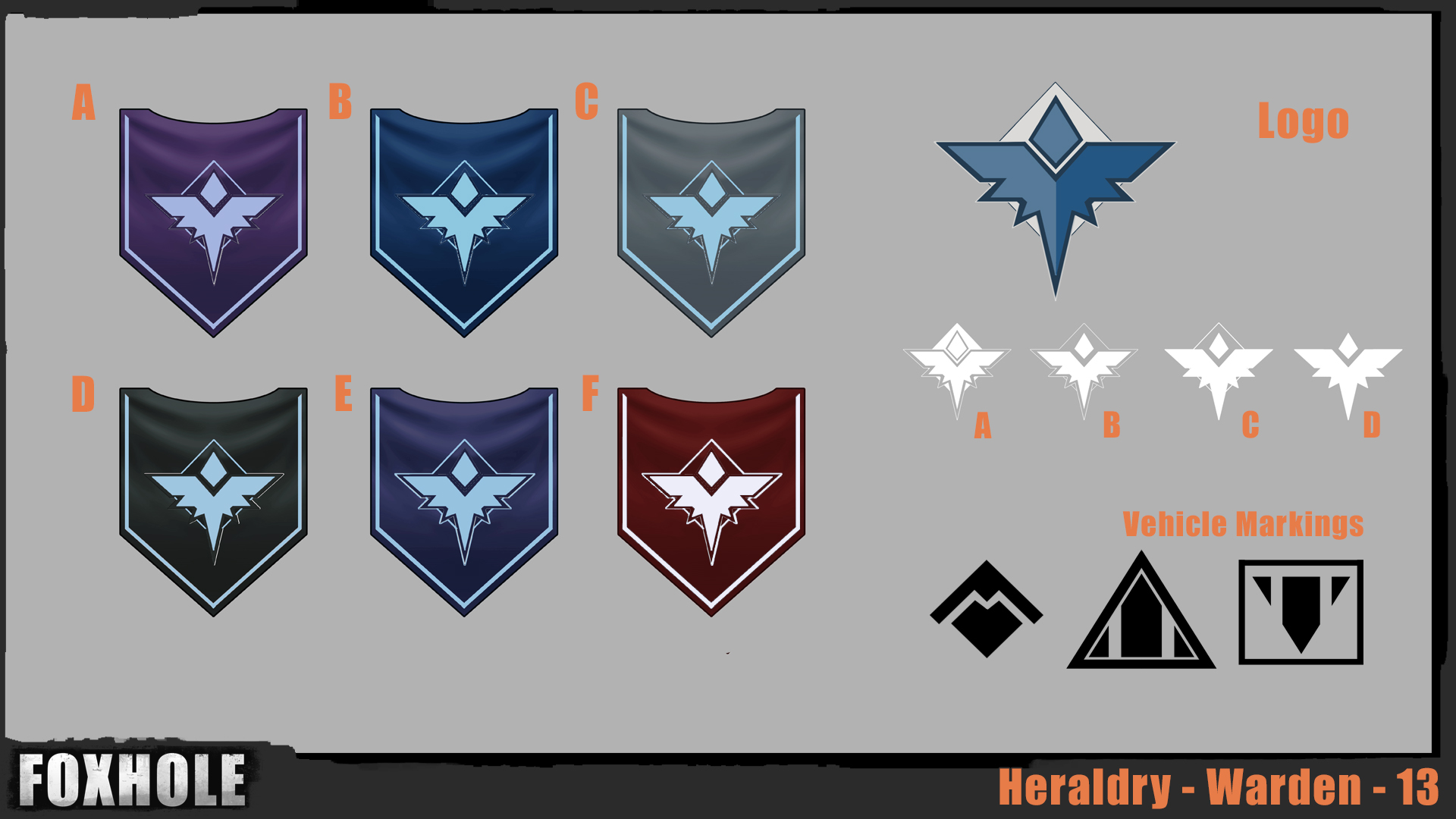 We've been wanting to design a new weapon like this for awhile: A wheel mounted, high caliber, anti-infantry gun that requires two players to transport and operate. The Field Machine Gun isn't based on any real world counterpart, but is fictional a cross between an PM M1910 and Flak 38. This concept was heavily inspired by the Flak 38 used by the Germans during the final battle scene of Saving Private Ryan. 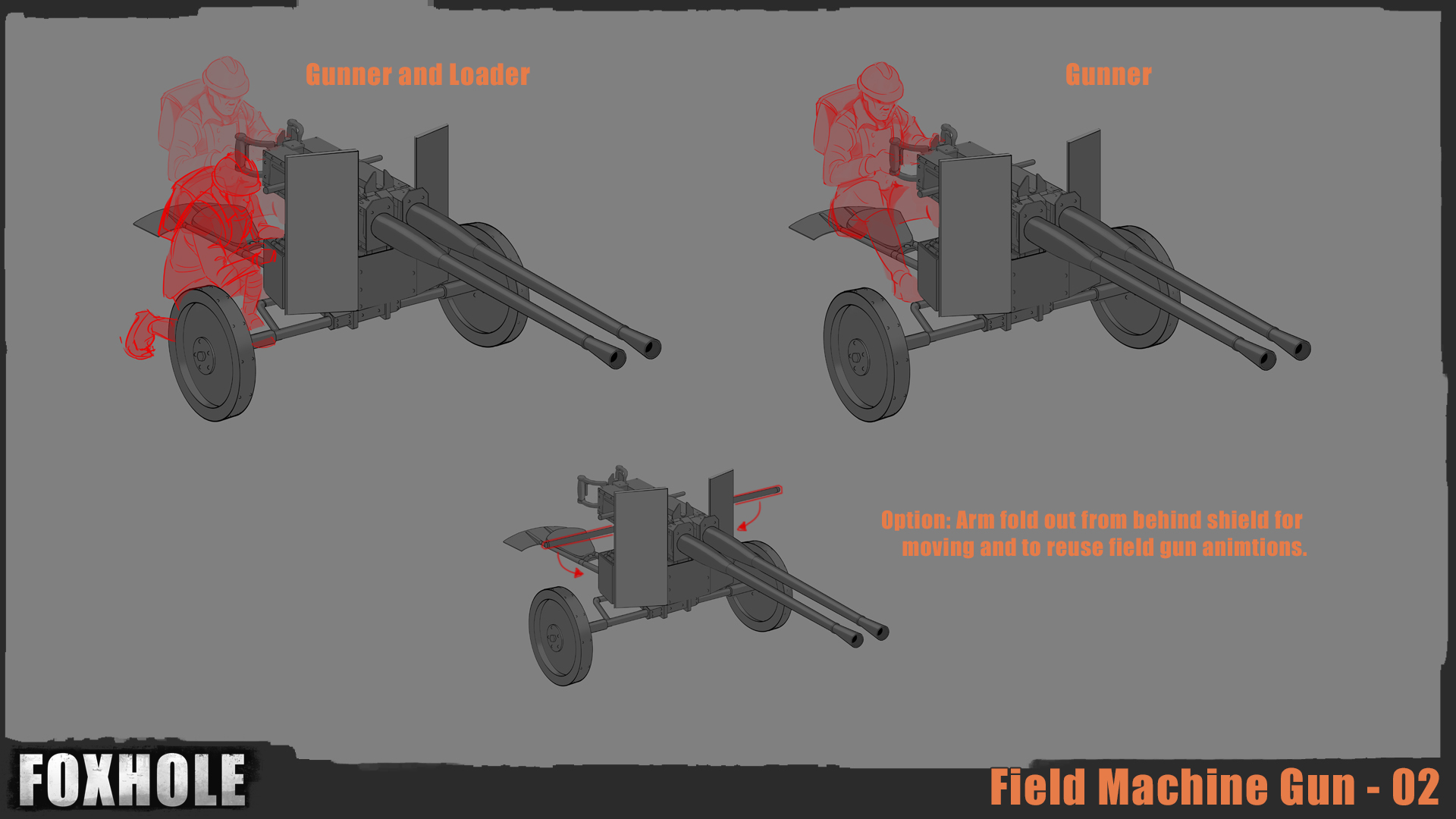 The Field Machine Gun will be excellent at repelling enemy infantry and will also have superior suppression capability. While we're still finalizing the details how each player will operate this weapon, our initial plan will make one player responsible for aiming and firing, and the other responsible for reloading. Both players will be required to push this vehicle. 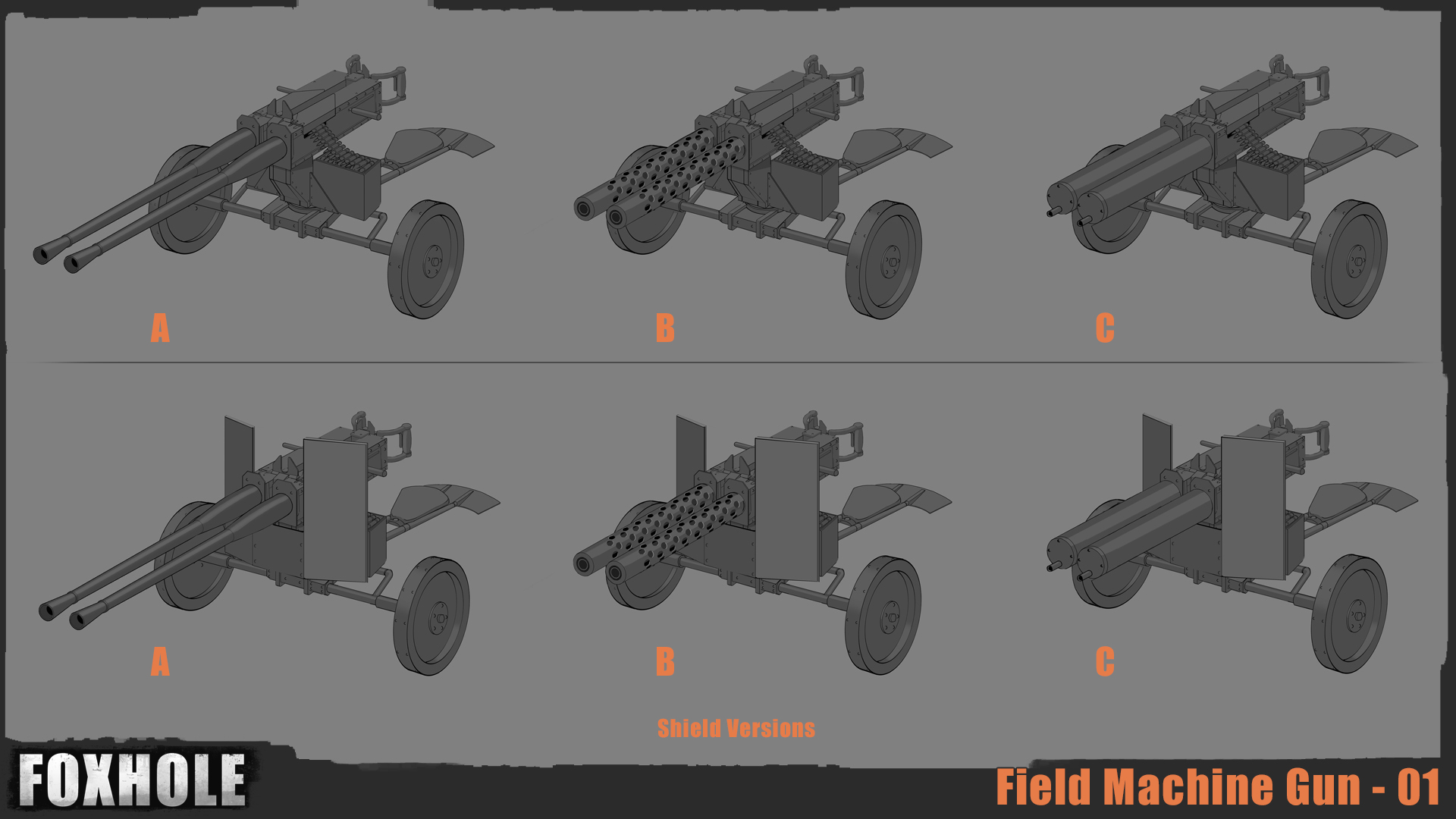 Variations on the Field Machine Gun

There are two large gameplay issues that we are currently focused on: early game pacing and team balance. The later is a more complex issue that we will be discussing more in the future, but in the near term we will be taking steps to address the wonky pacing that occur at the start of wars.

For anyone that has been participating in wars for the last few months, you know how important the opening moments of wars are. One very dominant strategy is to rush to the most important towns and build a few Foxholes to secure them. We don't think there is any problem with the idea of rush tactics in general and there is a place for it in the game, but the current method is flawed in many ways:

1. It's extremely difficult to counter once the first Foxhole is built

2. It's relatively low effort and there isn't much risk or trade off involved 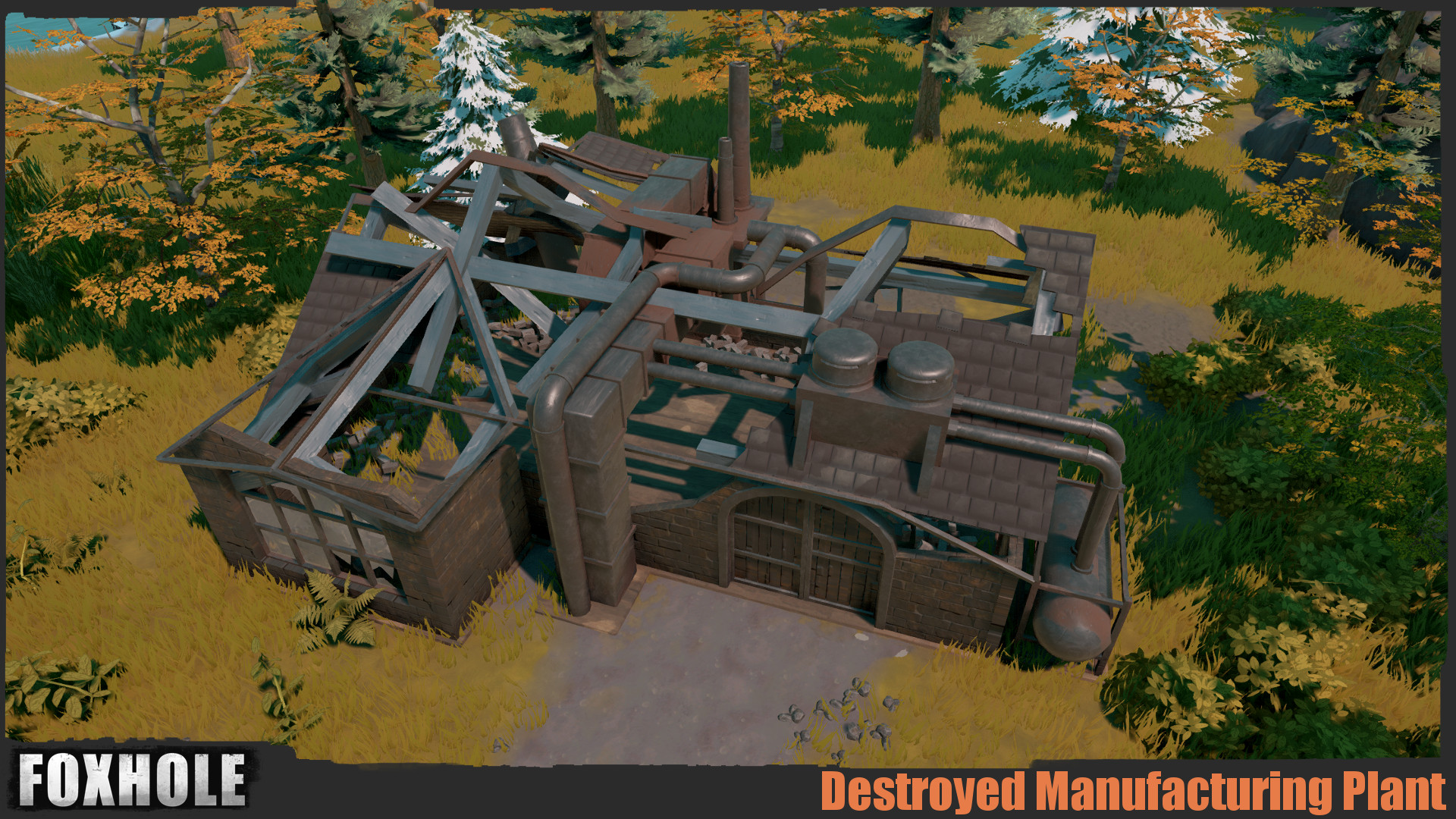 Even Manufacturing Plants can now be destroyed

We don't believe we've found the perfect solution for these pacing issues yet, but there is at least one change we are making in the near term, and two others that are under heavy consideration:

All world structures (other than those in starter towns or home regions) start destroyed from now on. In addition, Manufacturing plants will now be destructible (they can be rebuilt using Scrap). Towns will essentially be useless until one side can muster the resources to rebuild the structures within them.

Team owned structures like Foxholes will have an activation period that is based on the distance to nearest friendly Town Hall or Outpost. The period of time increases exponentially with distance. A Foxhole built deep behind enemy lines will now take a significant amount of time before it begins firing at enemies, leaving it vulnerable unless properly defended by players or other supporting structures. We don't feel this approach is a complete solution on it's own, but we think this could help stem some of the unbalanced usage of remote passive defense structures in the near term.

3. Supplies for passive defense (under consideration)

We aren't ready to pull the trigger on this one yet, but since the start of the project we've wanted to integrate passive defense structures like Foxholes with the supply line system. We've always felt it was a bit unnatural that one could build a Foxhole that could sustain itself for an infinite period of time without support from a town or supply line. There are several approaches we are exploring including the idea of having Town Halls and Outposts act as supply distribution points for passive defense structures. The challenge is in not adding any unnecessary strain to an already saturated logistics pipeline in the game.

Are they really holding the knife by the blade with the bare hands?