An article revealing the significant changes coming to Misty Mountains in the next release!

Posted by MathijsRevora on Jun 4th, 2021

Ever since we started working on Misty Mountains back in 2015/2016, the faction has felt somewhat schizophrenic. It lacked a clear, central theme and style that everything related to, with various things tacked on over time, turning it into somewhat of a patchwork faction.

Back then The Hobbit was still fresh in everyone’s collective fan consciousness, and we felt we had to tick a number of boxes introduced by those films in order to make it easier for people to be invested in the material and become interested in our project, as well as us just being less critical of this material ourselves than we are now. Over the years, however, the taste those movies left behind has soured considerably, and we’ve grown much more into the habit of creating our own material (characters, stories, and themes).

This, coupled with the glaring issues that Misty Mountains has had for years - varying quality of 2d and 3d art, effects, and gameplay elements - has led us to finally make some drastic changes to raise the faction up to the standards set by our later releases.

The new Misty Mountains coming in the next release double down on its theme of being a wild faction, full of savage creatures - various types of trolls and orcs, as well as vicious beasts - wolves, Fire Drakes, and and the airborne bats and Cold-drakes. Further details explained below! 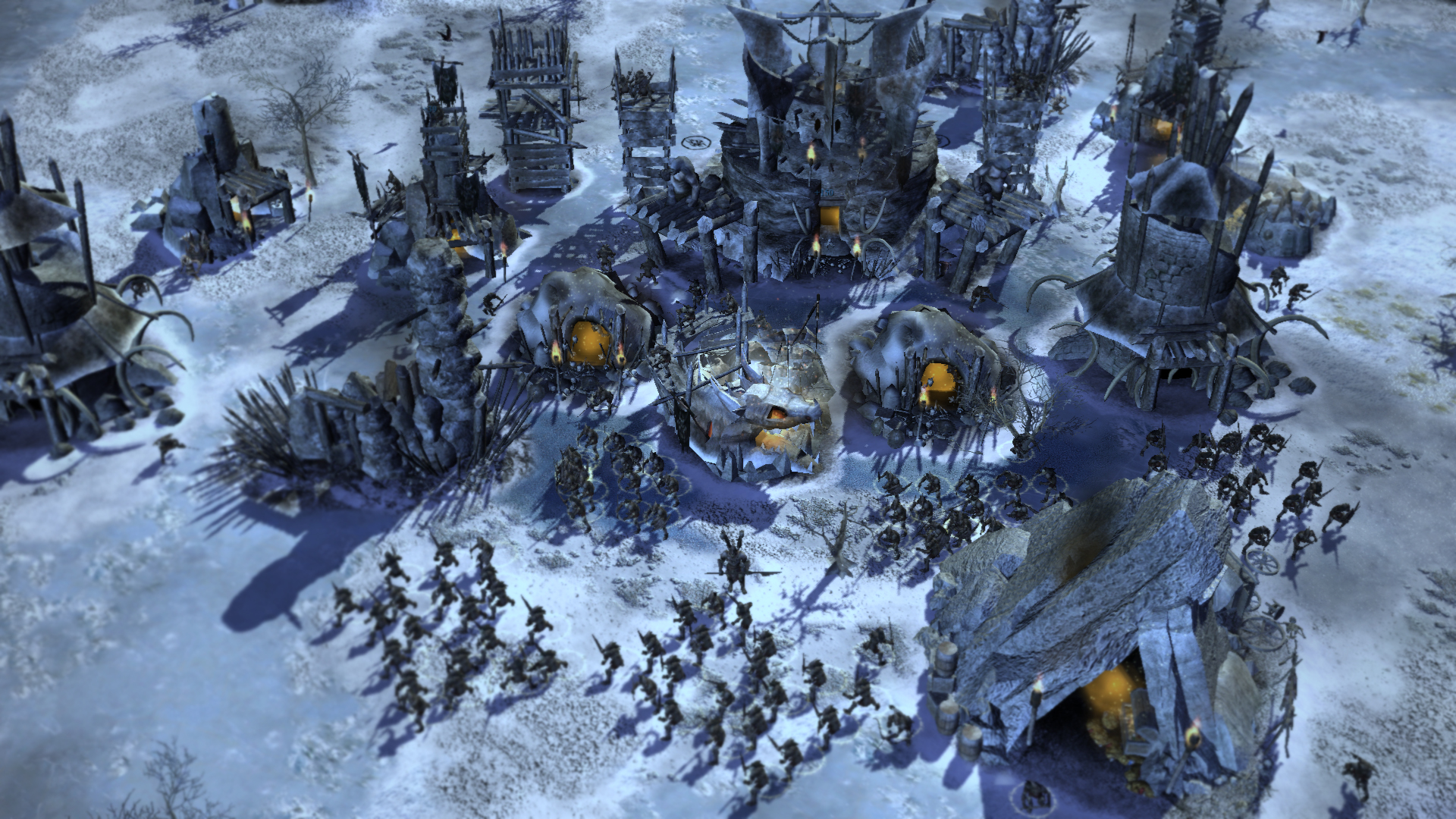 We’ll bite the bullet and spell it out: Azog the Defiler has been removed from the faction. The reason for this is much speculated on and generally misunderstood throughout our community from the moment it became known that it was happening. So we’ll be clear:

Azog was removed because we did not like him as a character. We feel he represents most of everything that we do not like about The Hobbit films. His inclusion was not necessary for the story, his depiction was soulless CGI, and his character, though present in all 3 films, was underwritten and shallow.

This does not mean we will or should remove every element from these films from our mod. This isn’t an exact science, it’s all based on subjective feeling and opinion - we’re doing what we think needs to happen to make our vision for this project come true, and so Azog had to go. His presence prevented the faction from rising above what we see in The Hobbit and really going into its own distinct direction.

In Azog’s stead, we have added Bolg of the North and Lug the Mauled, two new heroes that will serve to lead the Misty Mountains, take over some of Azog’s utility, and fill out the faction’s somewhat lacklustre number of heroes.

Bolg of the North, Vicious Chieftain 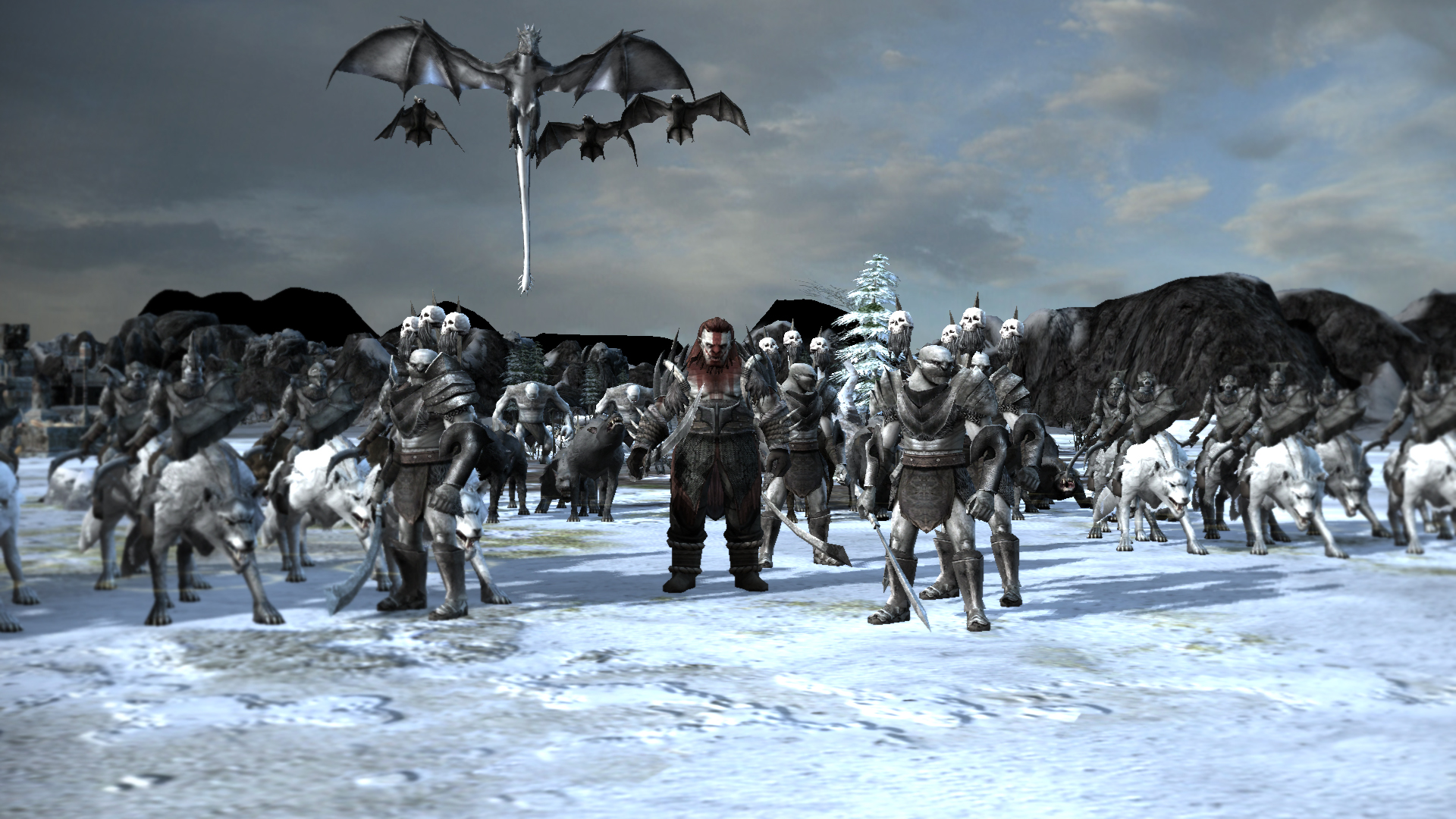 Wolves, orcs, bats... all are Bolg's to command. 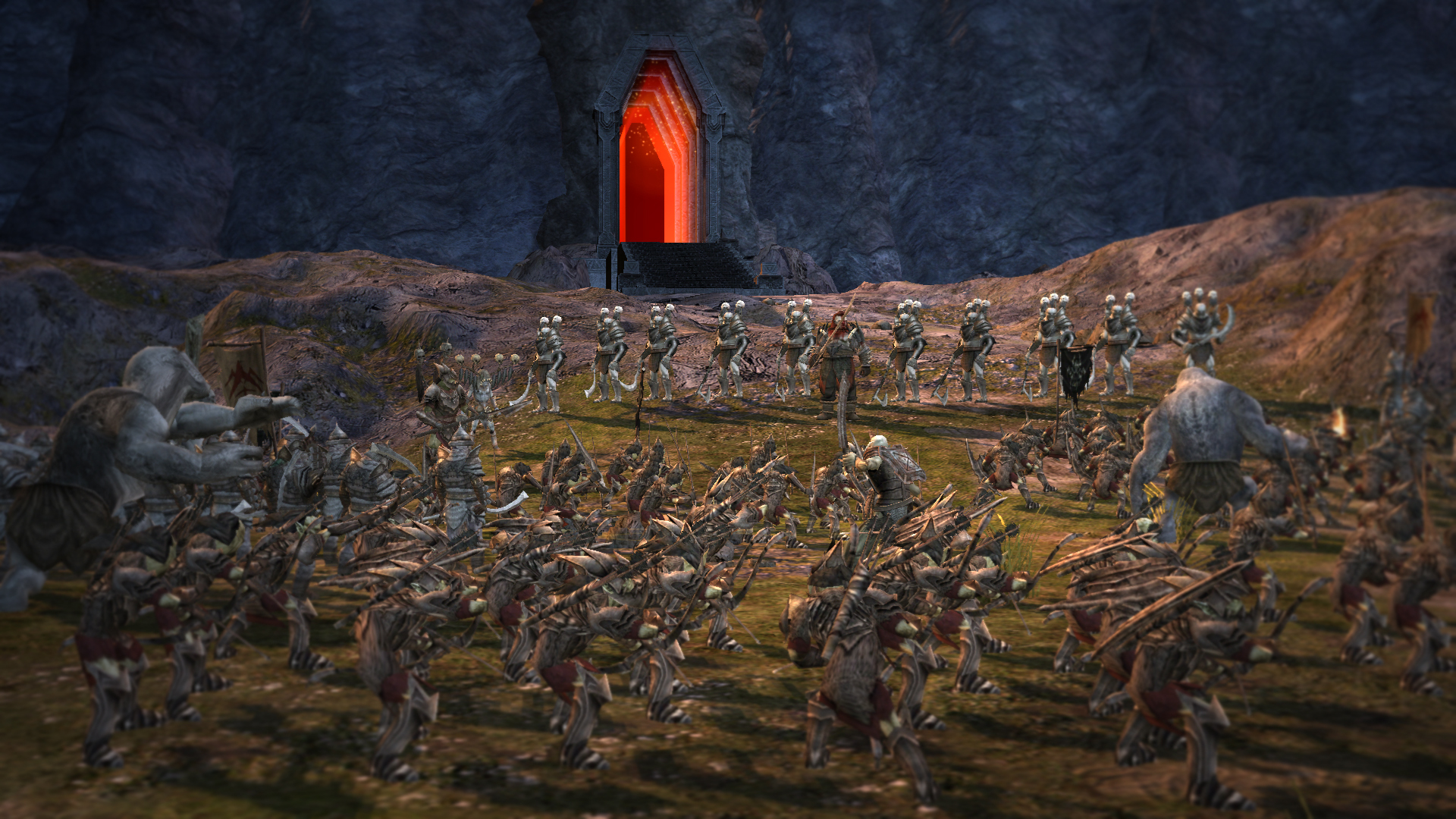 Replacing Azog as Faction Leader, Bolg of the North is a huge, hulking Orc, gifted with sharp cunning and brute strength. Though still the spawn of Azog, Bolg is not portrayed like he is in the film. Instead, we’ve opted for our own concept. His kit is geared towards supporting his troops, soaking up incoming damage, and doing decent damage of his own. 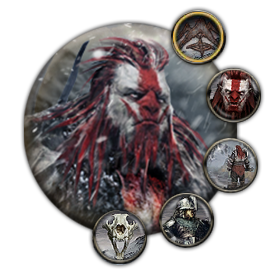 Rank 3: Growing Hatred
When activated, Bolg deals splash damage and his damage increases by +10% per hit, up to +50%. Bolg passively deals increased damage against Dwarves.

Rank 10: Terror of the North
Summons an army of bats, wargs, and Mountain-orcs. 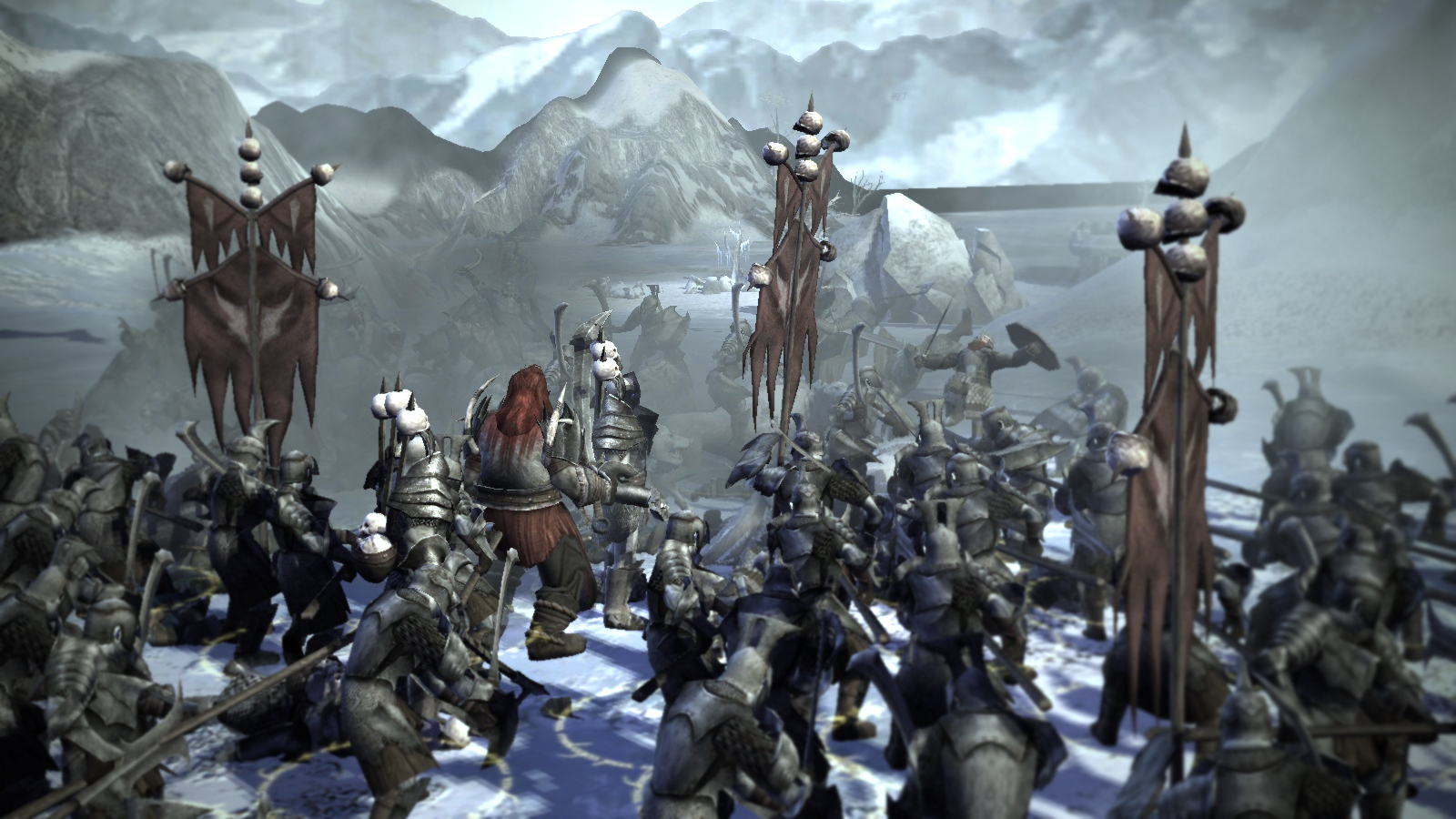 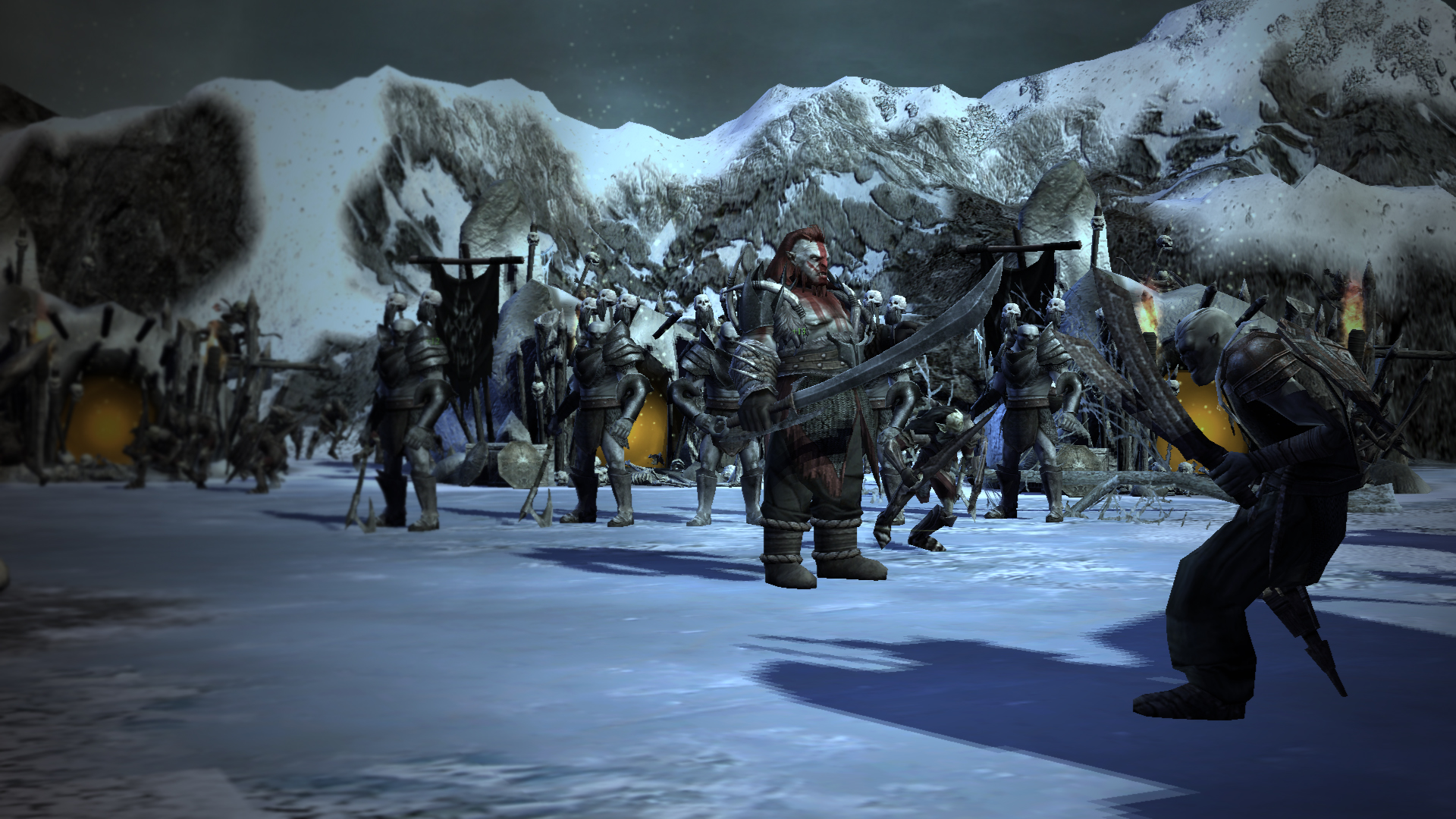 Bolg's got a contract for a shadowy assassin... 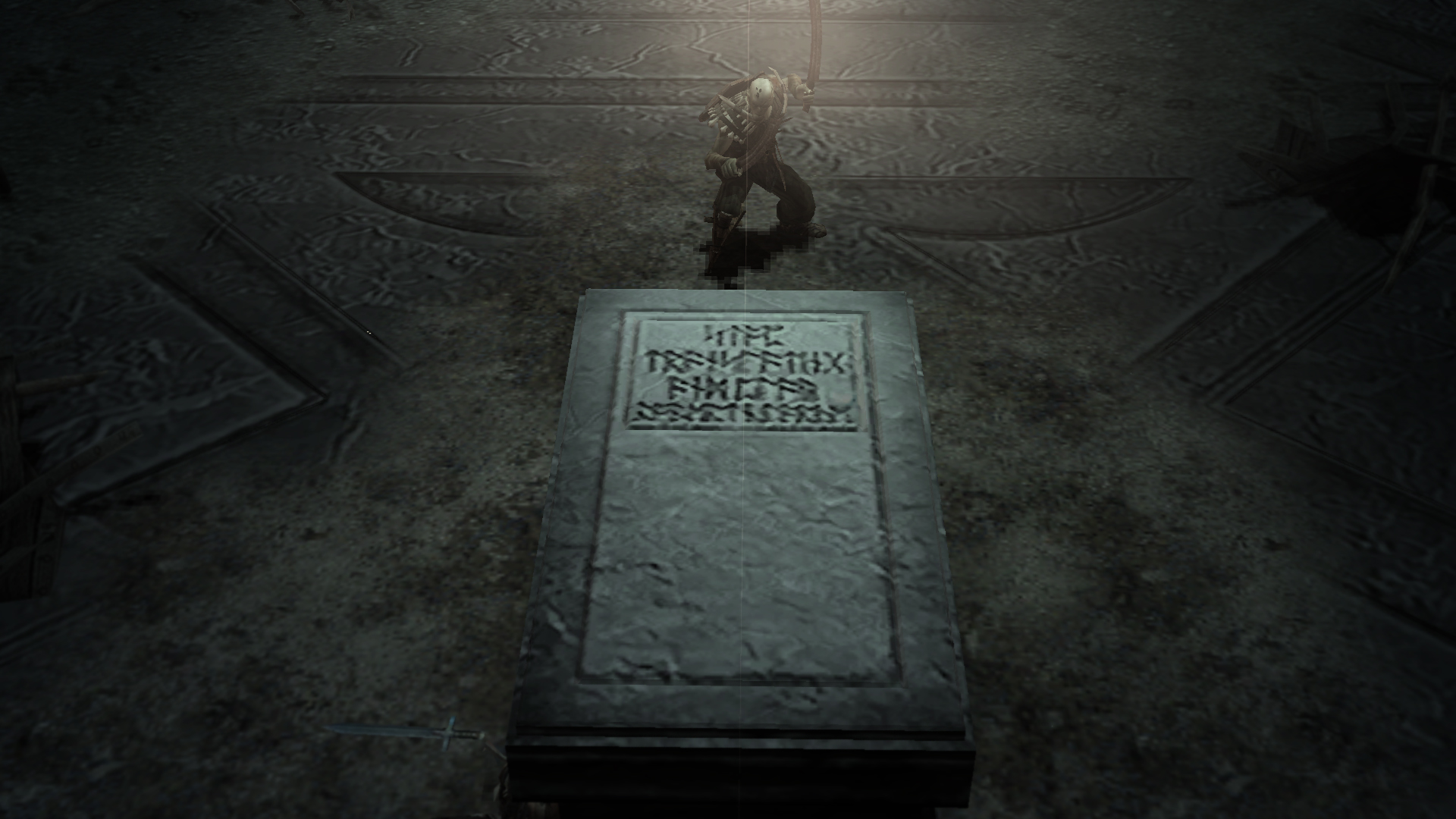 For more information on Lug's relationship to Balin, Lord of Moria, read his lore entry in the AotR Lore Compendium! 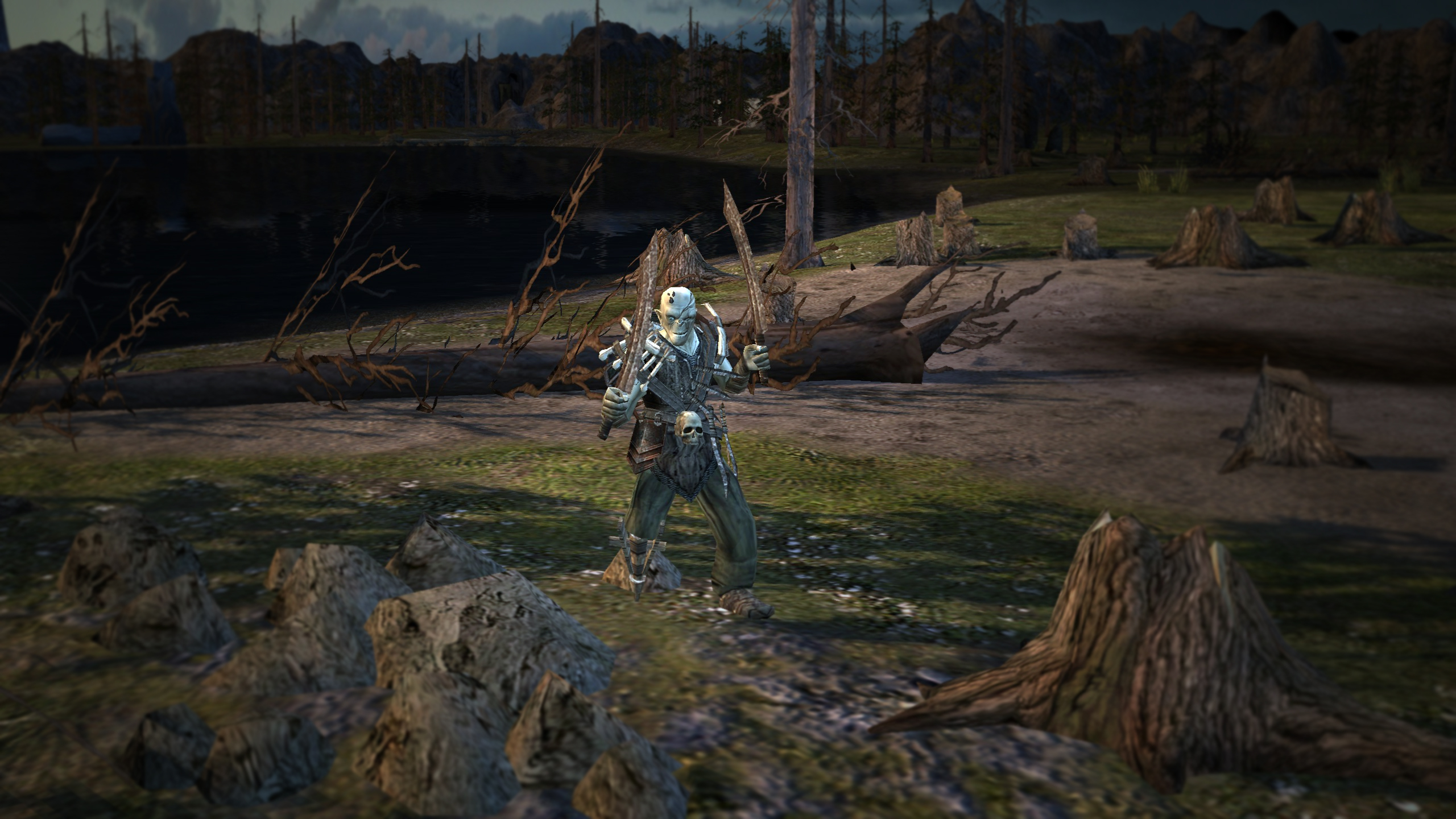 Muzgash or Lug, who is the prettiest Orc of all?

An original character that first made his entry in Shadow and Flame many years ago (though in a different guise), Lug the Mauled serves as a vessel for some of Azog’s utility as a hero killer, as well as Misty Mountains’ only ranged hero, as Lug can toggle between his dual blades and throwing knives. 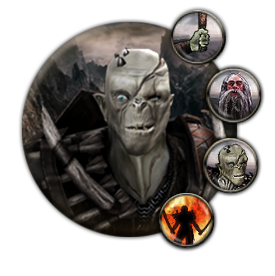 Rank 1: Headhunter
Puts a price on an enemy hero's head, significantly reducing their armor and speed. This ability grows stronger as Lug ranks up.

Rank 6: Scorched Earth
Lug sets fire to the earth and burns all friendly and enemy units. 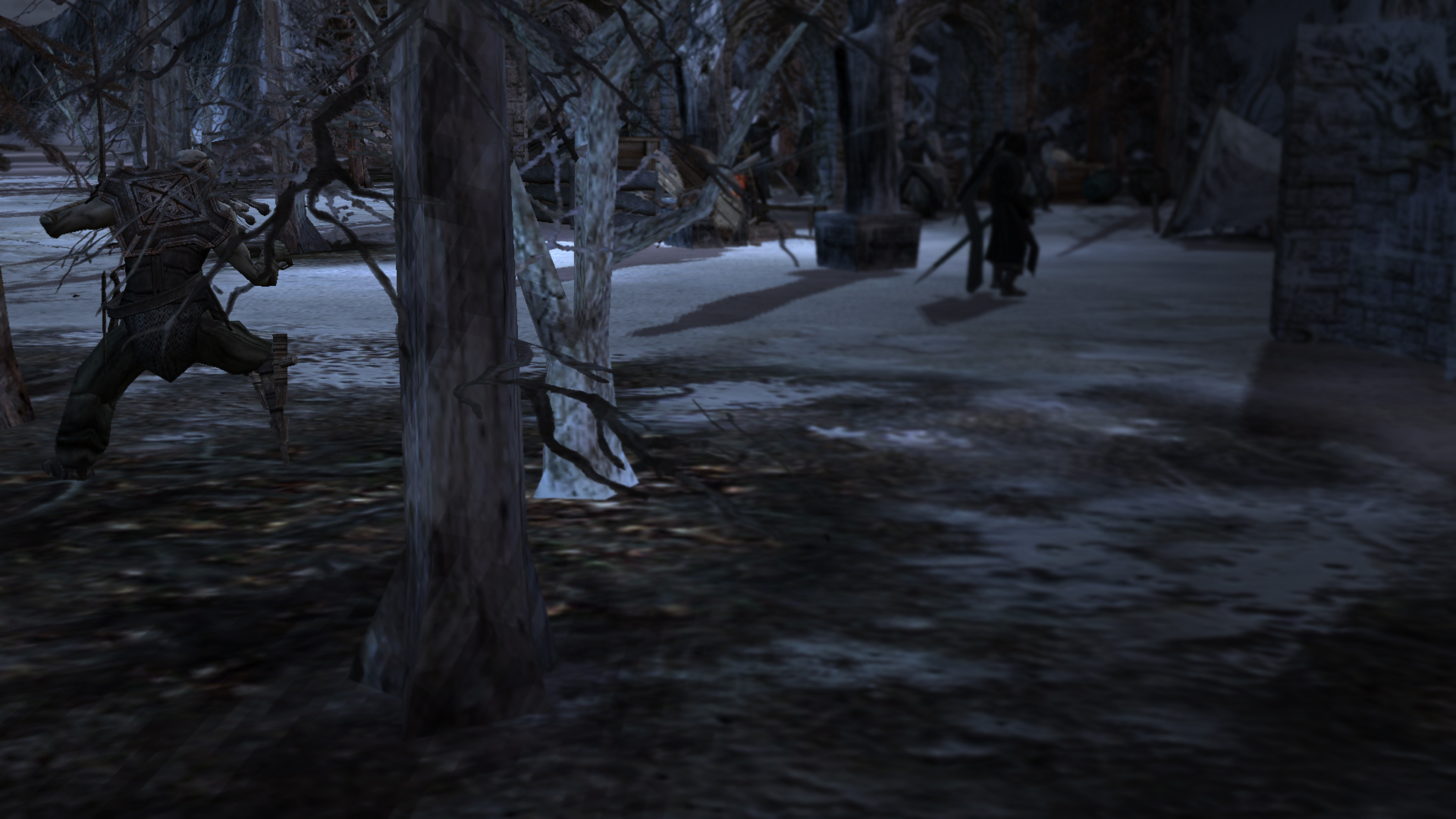 Lug's about to fulfill a contract...

The Misty Mountains Spellbook is largely unchanged from 6.0, but for one very important detail: Untamed Allegiance has been removed. In its place is now the Trollish Stew power, which summons a kettle of lovely stew guarded by 3 familiar Trolls. The summoned kettle fortifies and heals nearby friendly troops, and William, Tom and Bert will attack anyone that gets too close to their camp. 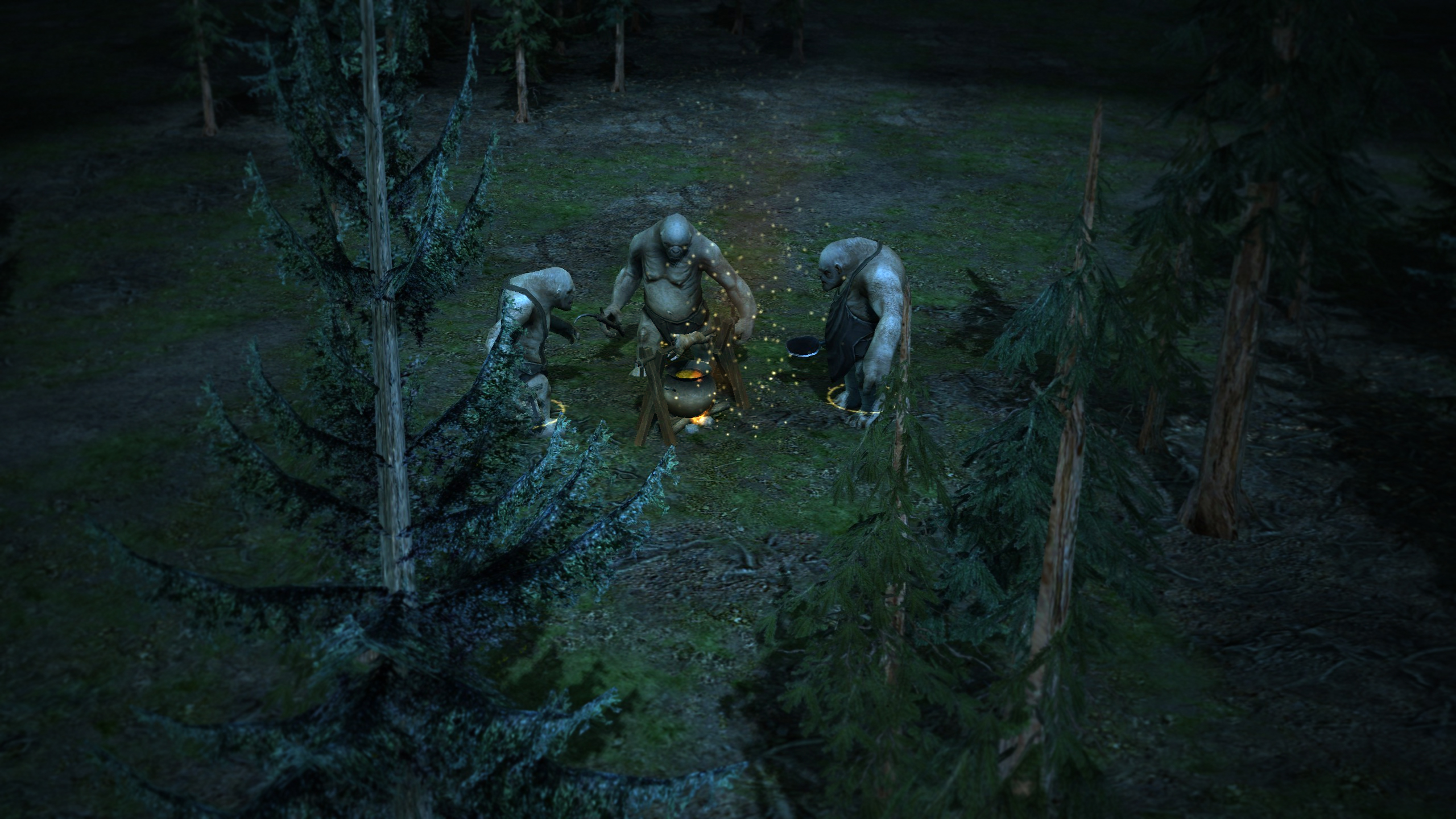 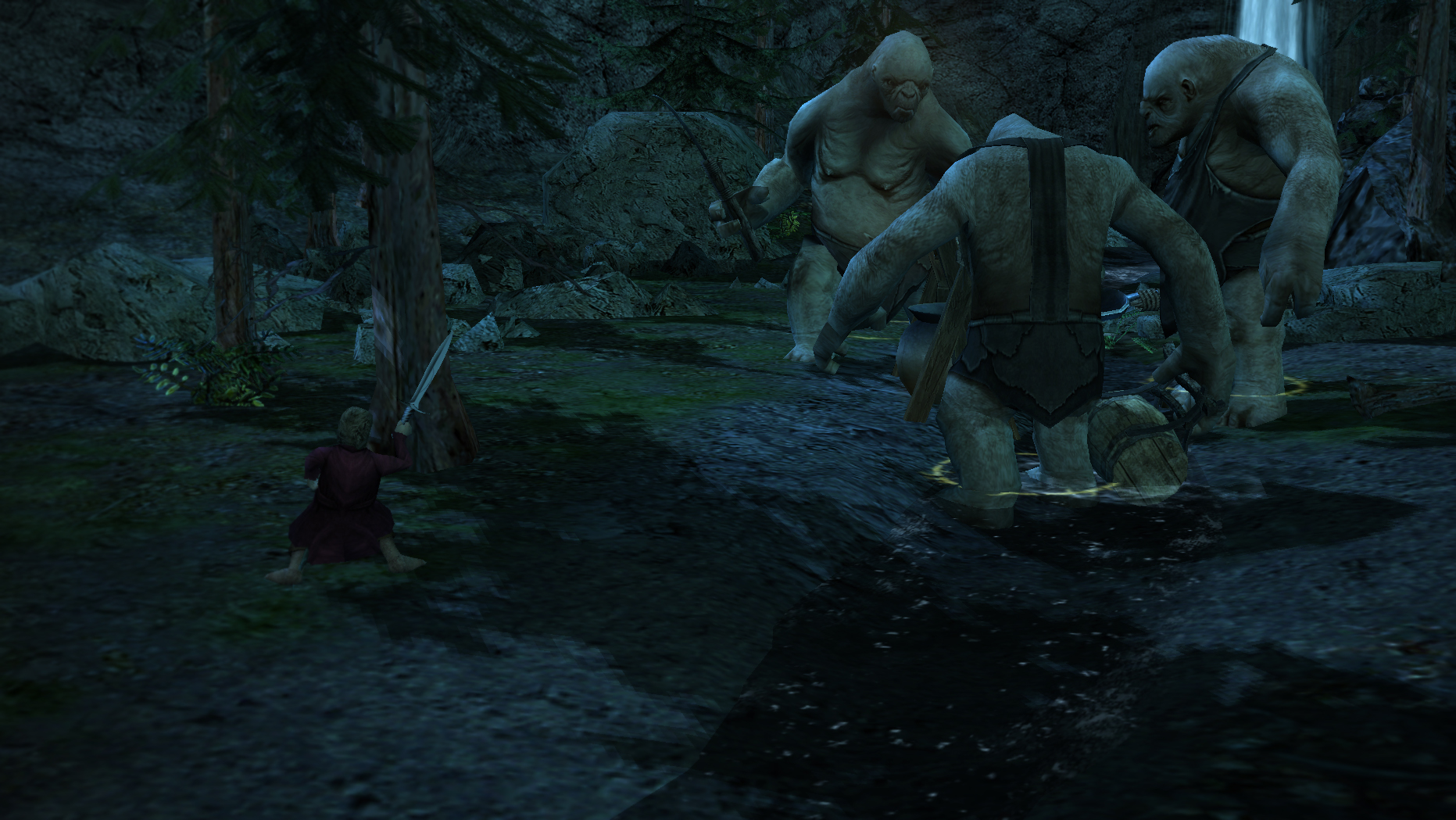 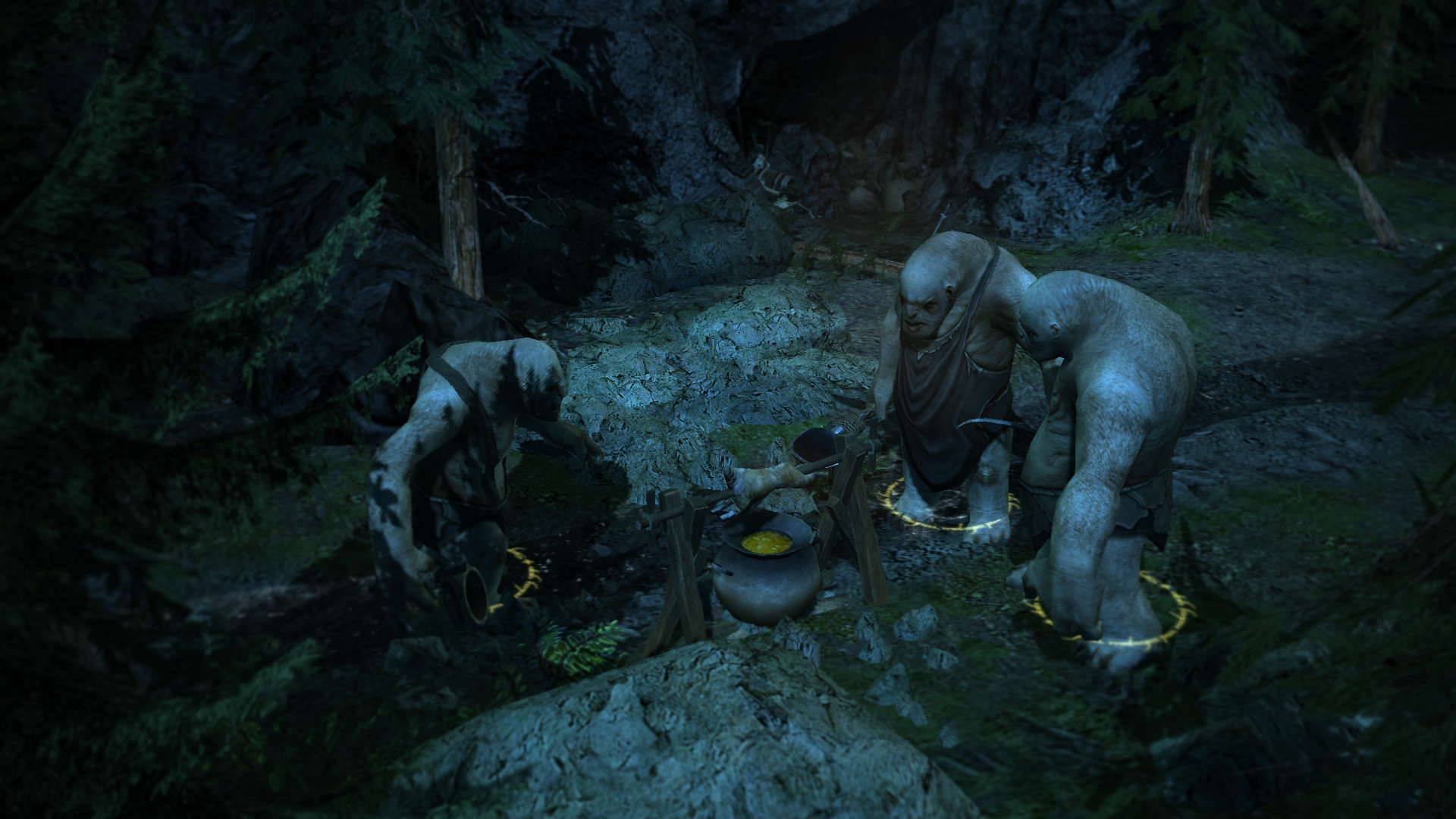 Untamed Allegiance isn’t entirely gone, however. Along with a modern visual facelift, the Misty Mountains Fortress has received several changes to the way its upgrades work, including a brand new power: Wild Allegiance, which allows you to capture any neutral creep lairs within vision. 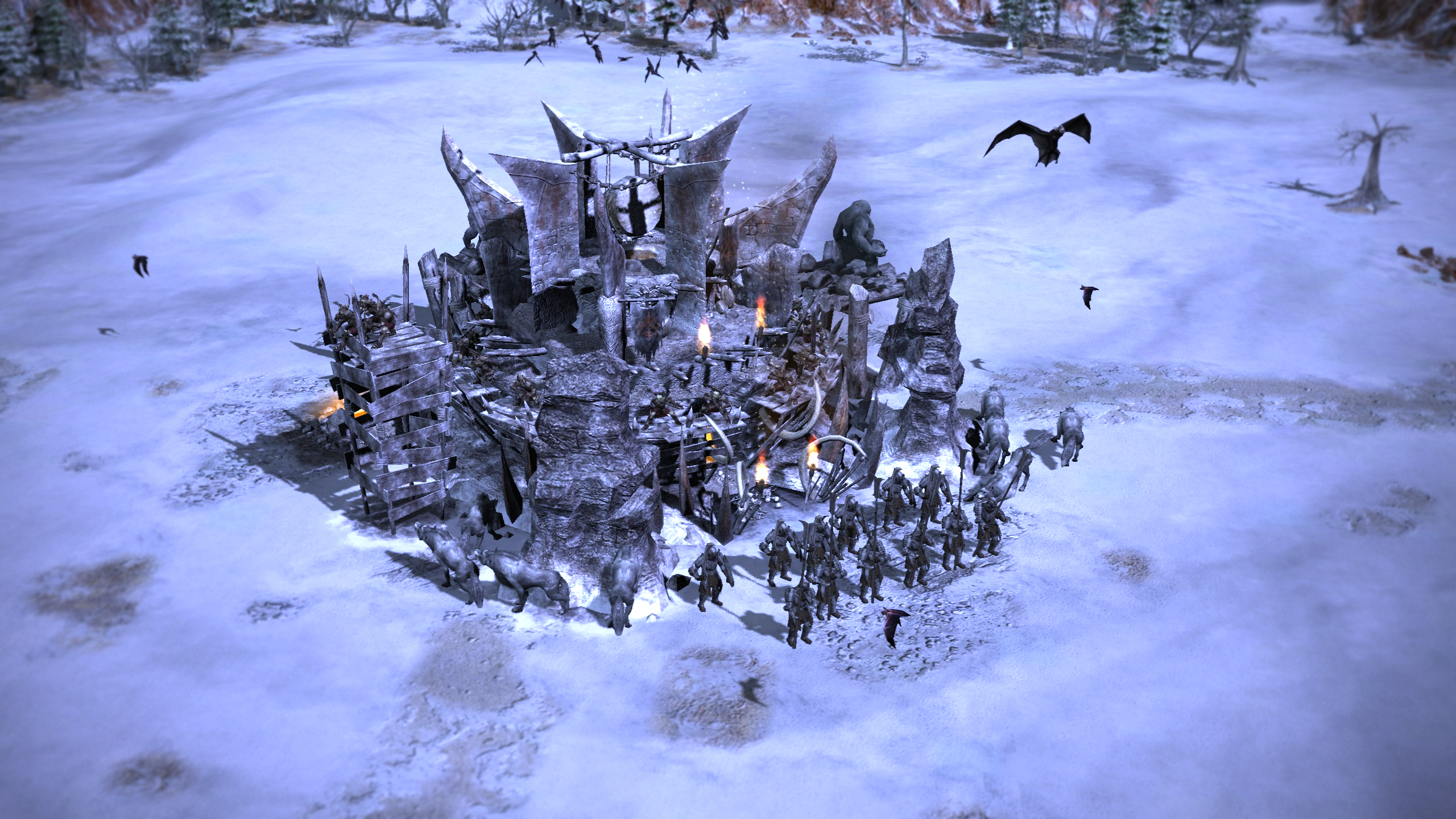 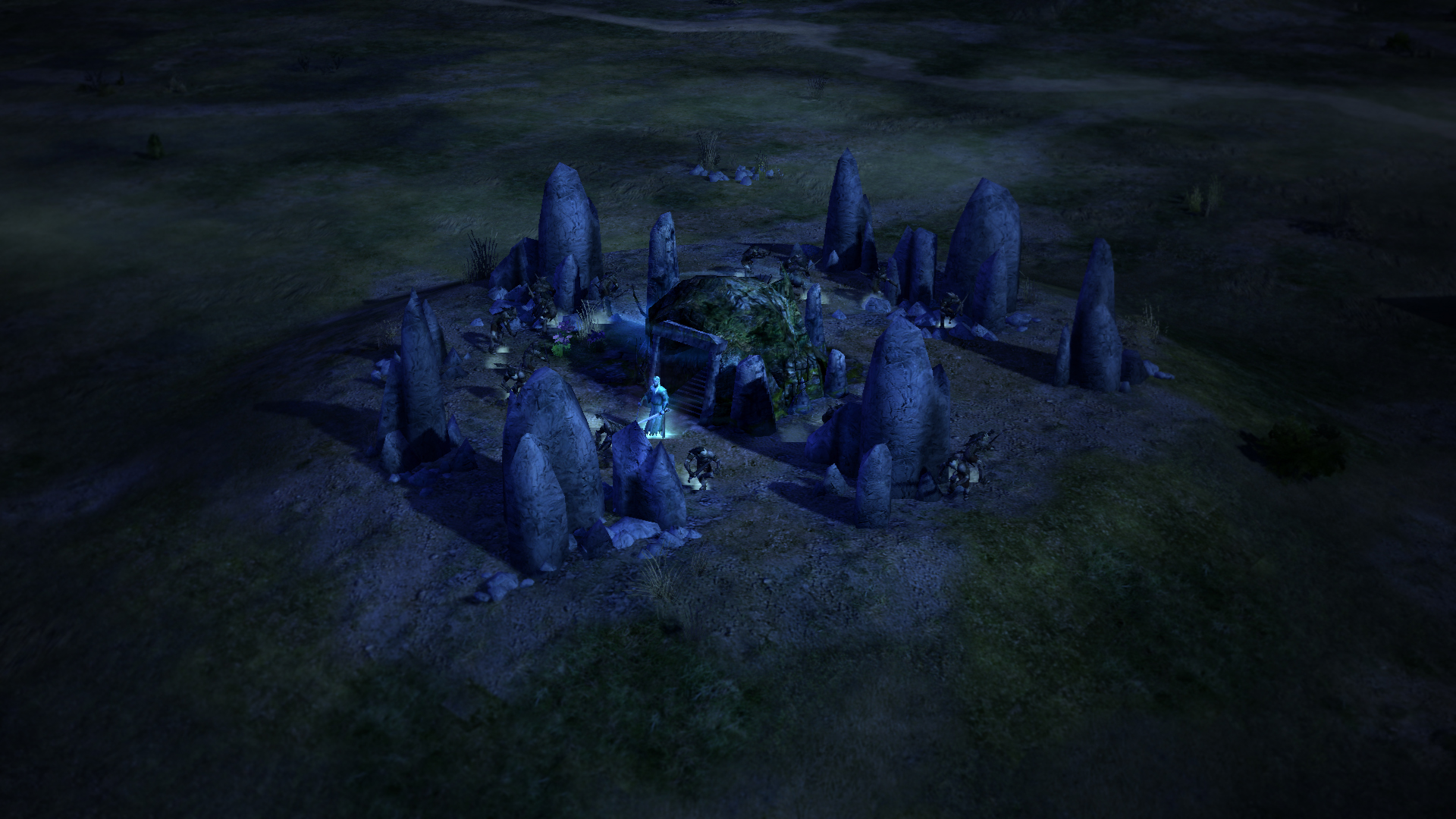 Wild Allegiance can be researched from the Fortress for 600 resources. Once researched, the power becomes available from the Fortress. Once captured, the lair’s original inhabitants are killed and a band of Moria Orcs starts defending the lair. Not to worry, you’re not going to miss out on any resources by not destroying the lair: once captured, it starts to generate a small amount of resources. And, of course, you’ll be able to recruit the relevant creep units from the lair. That means Misty Mountains now has access to a wide variety of new units - Jungle Trolls, Hill Trolls, Lossoth Warriors, Spiders, Wights, et cetera, depending on the map and availability of lairs.

Beyond this, we have removed the artificial gating elements that were part of the Fortress upgrades. That means no more Allegiances - instead, all Misty Mountains units can be recruited from the start, with the exception of the Fire Wyrm and Cold-drake, which will still require the Brood of the North upgrade to be unlocked so that the Wyrm Lair can be built. This is to emphasize their strength and status as independent, rogue agents in Middle-earth. 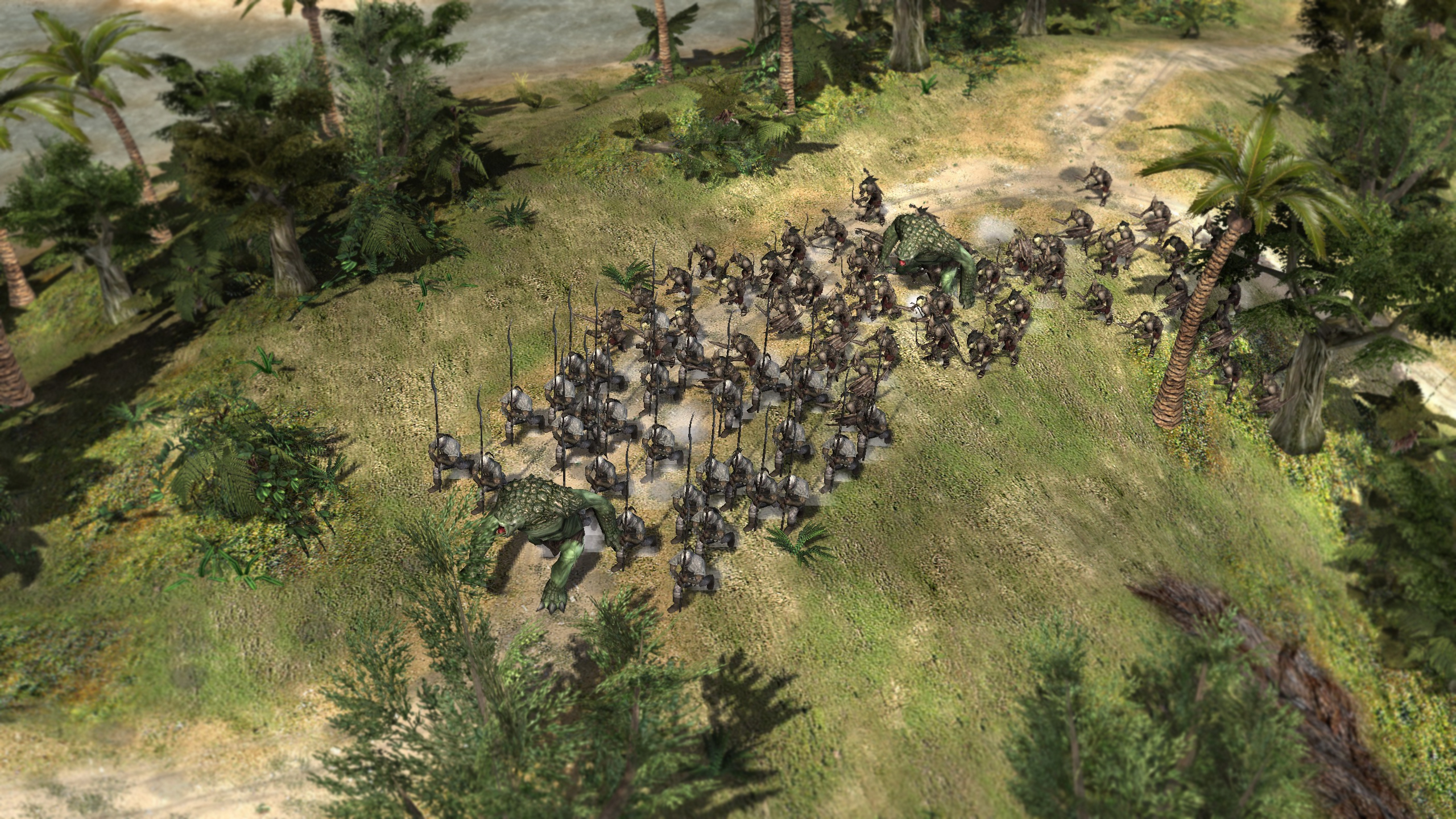 Misty Mountains will receive a new monster unit: the Cold-drake, a flying dragon unable to breathe fire but capable of wreaking havoc upon enemy armies and structures, serving as a high priority target and a distraction to enemy arrows while the rest of Bolg’s army marches into battle. 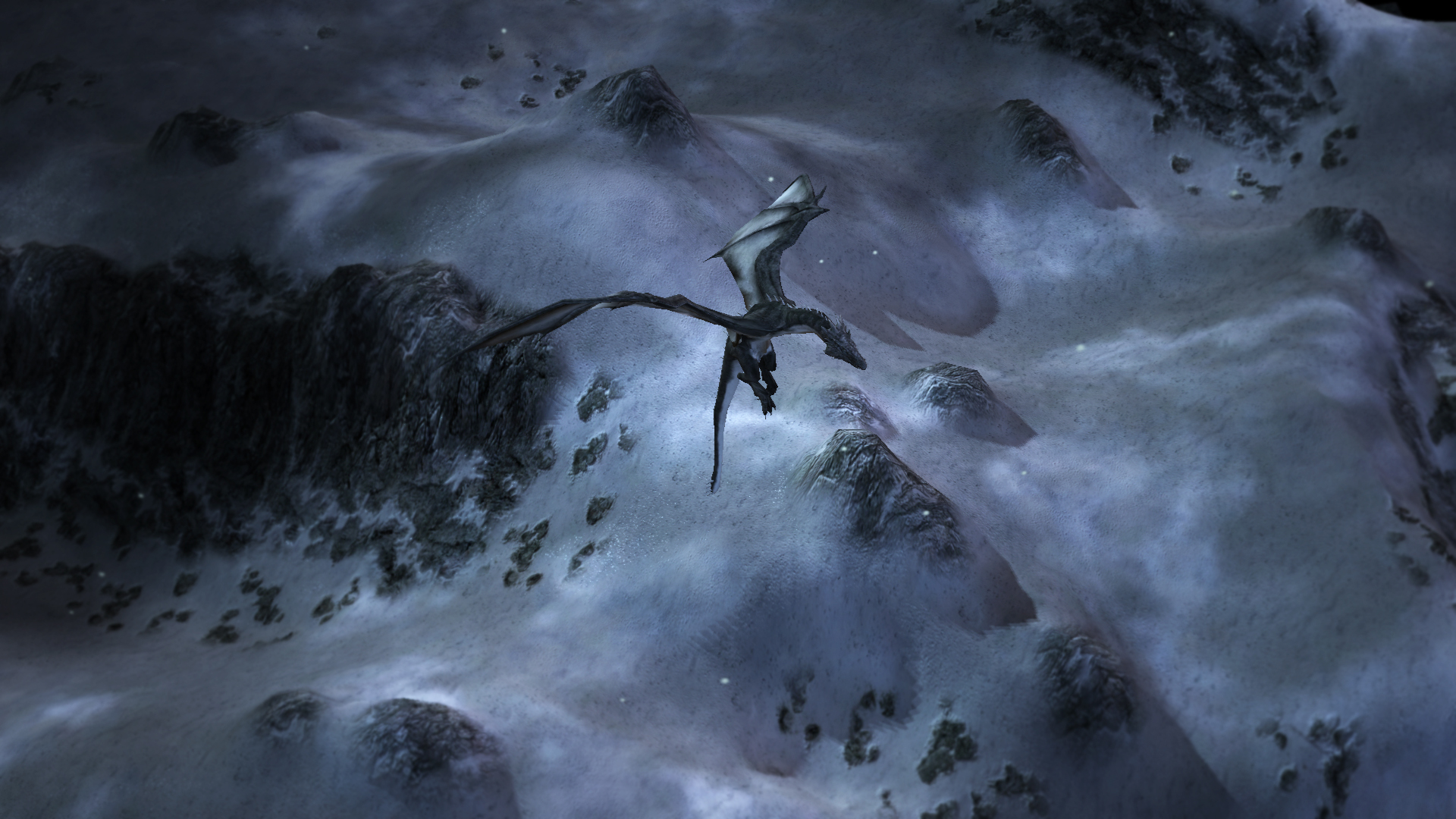 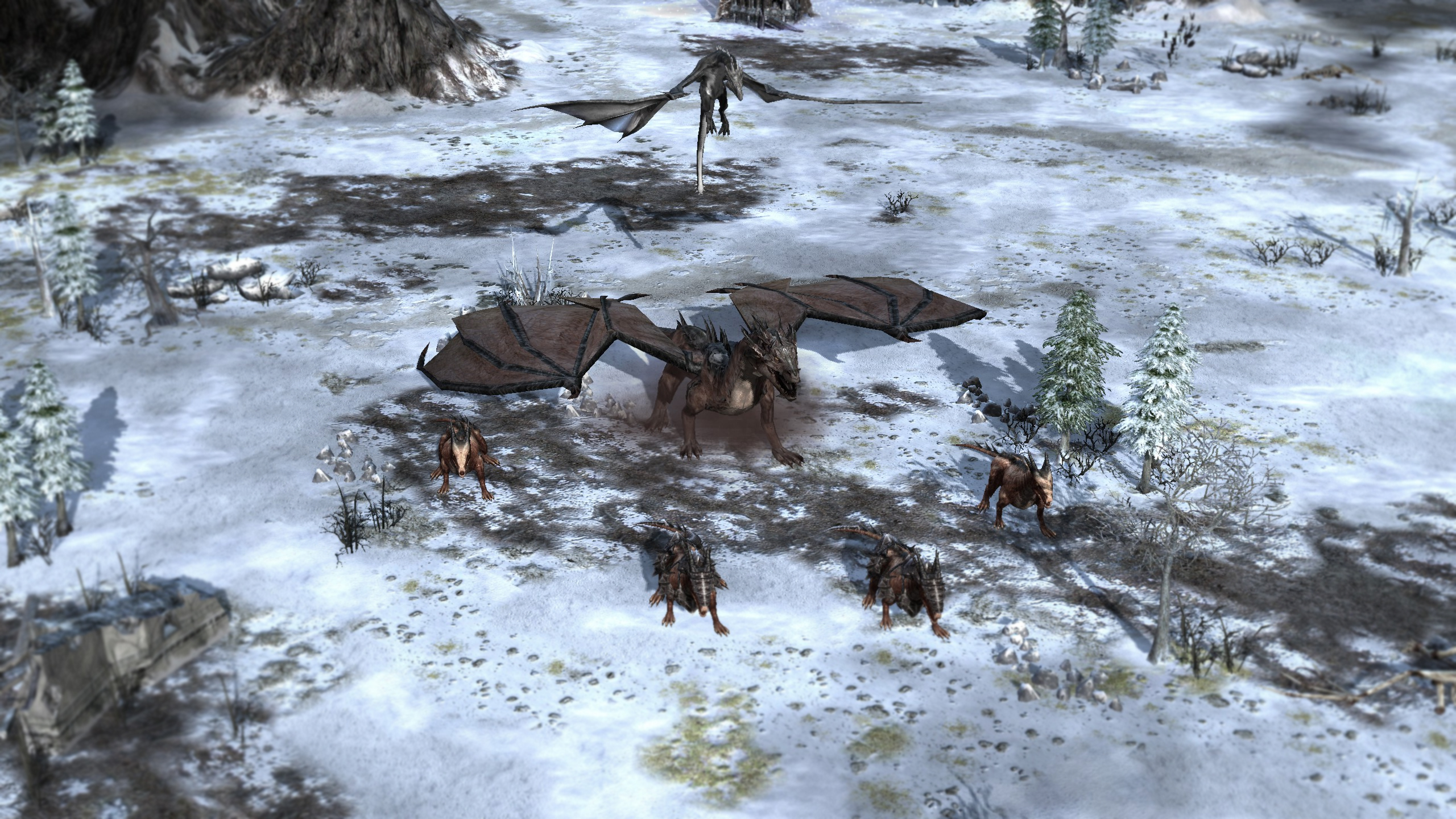 By the way, Smaug can land now!

We’ve also made an entirely new model for our legendary Muzgash! He now wields a looted Dwarf spear, and looks much more like the Moria Orc Chieftain that he’s intended to be. 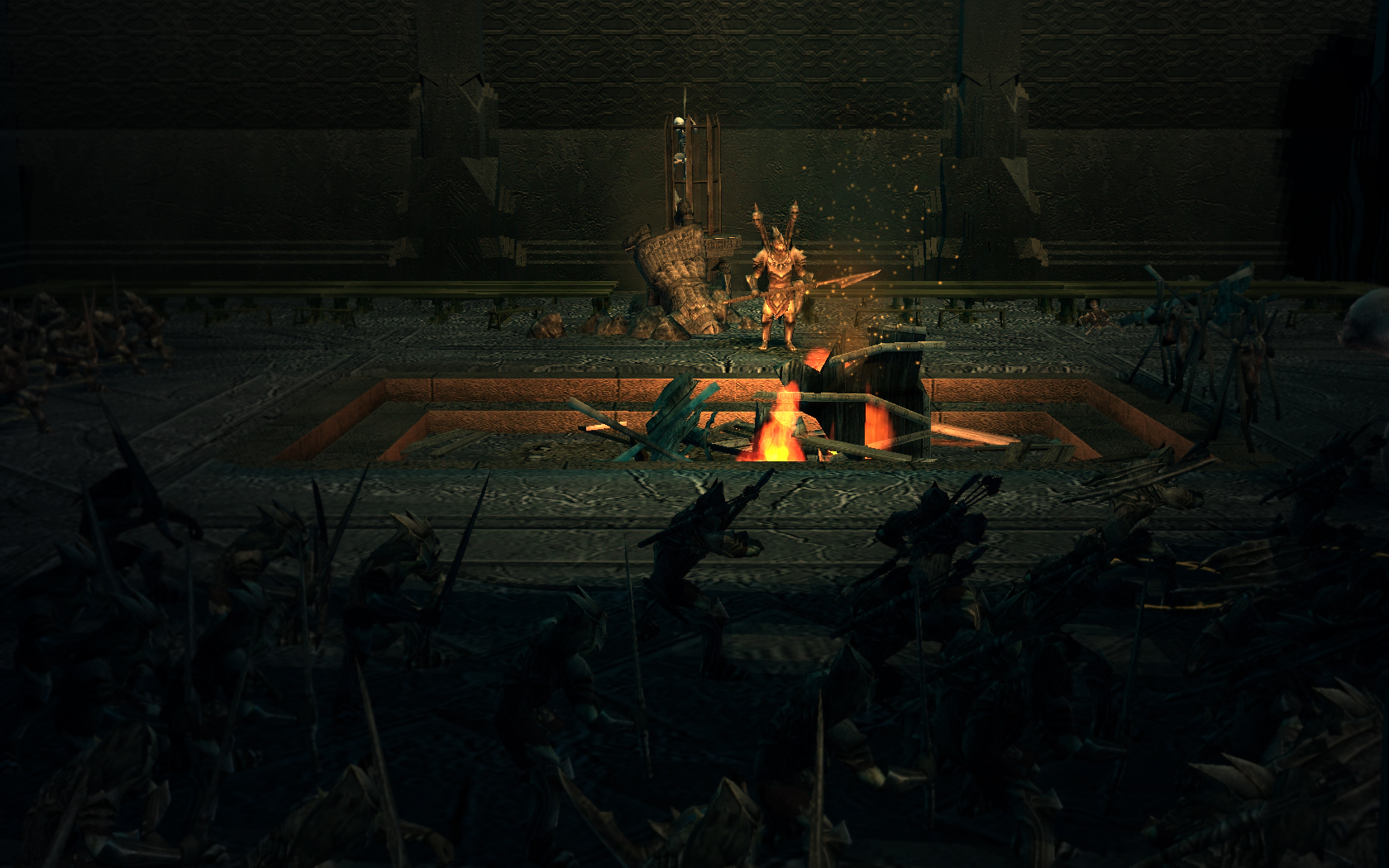 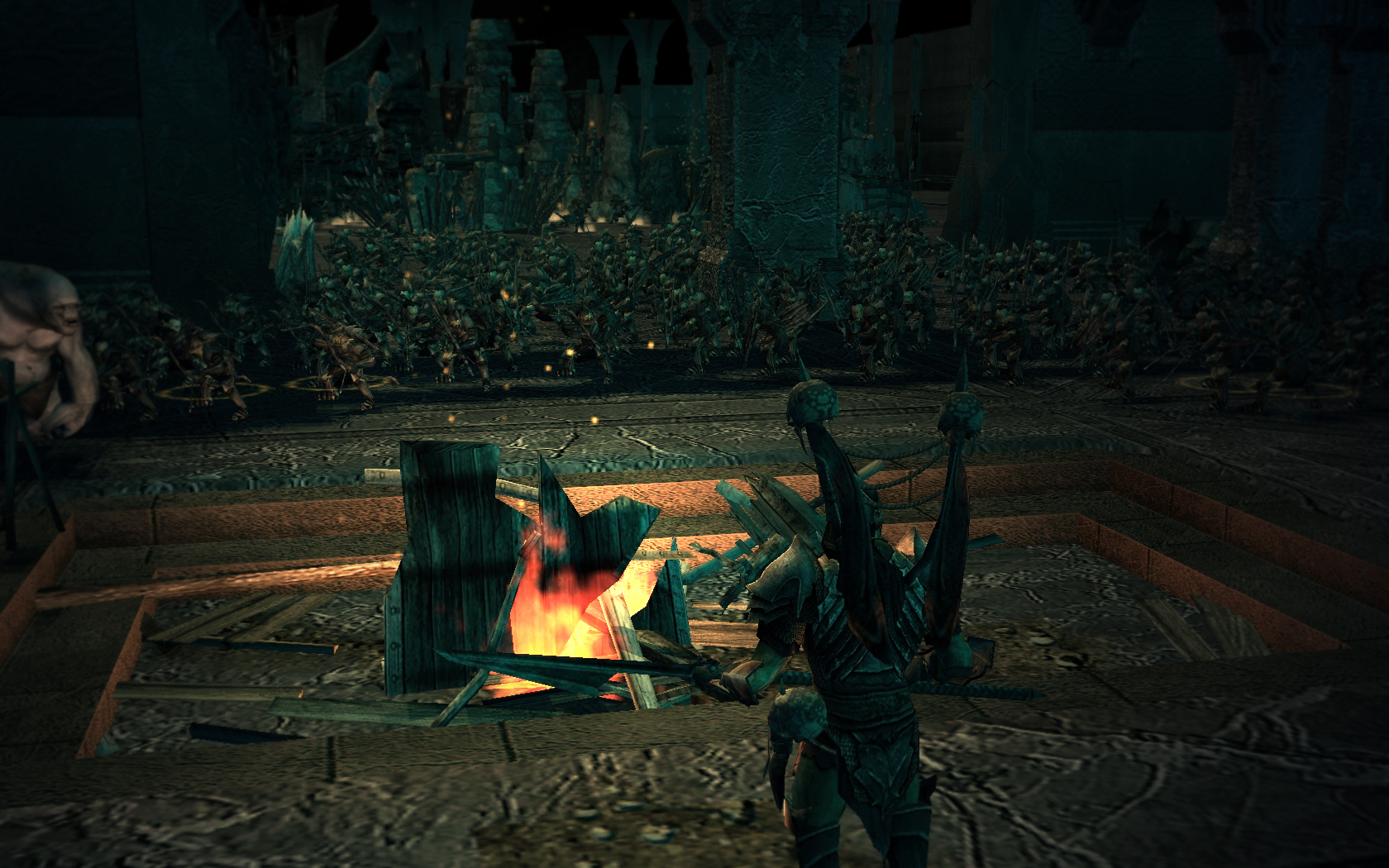 The Wolf Den has also been remodeled as well as renamed into the Wolf Cairn, a more feral looking structure befitting of the wild and untethered nature of the wolves of the Misty Mountains. 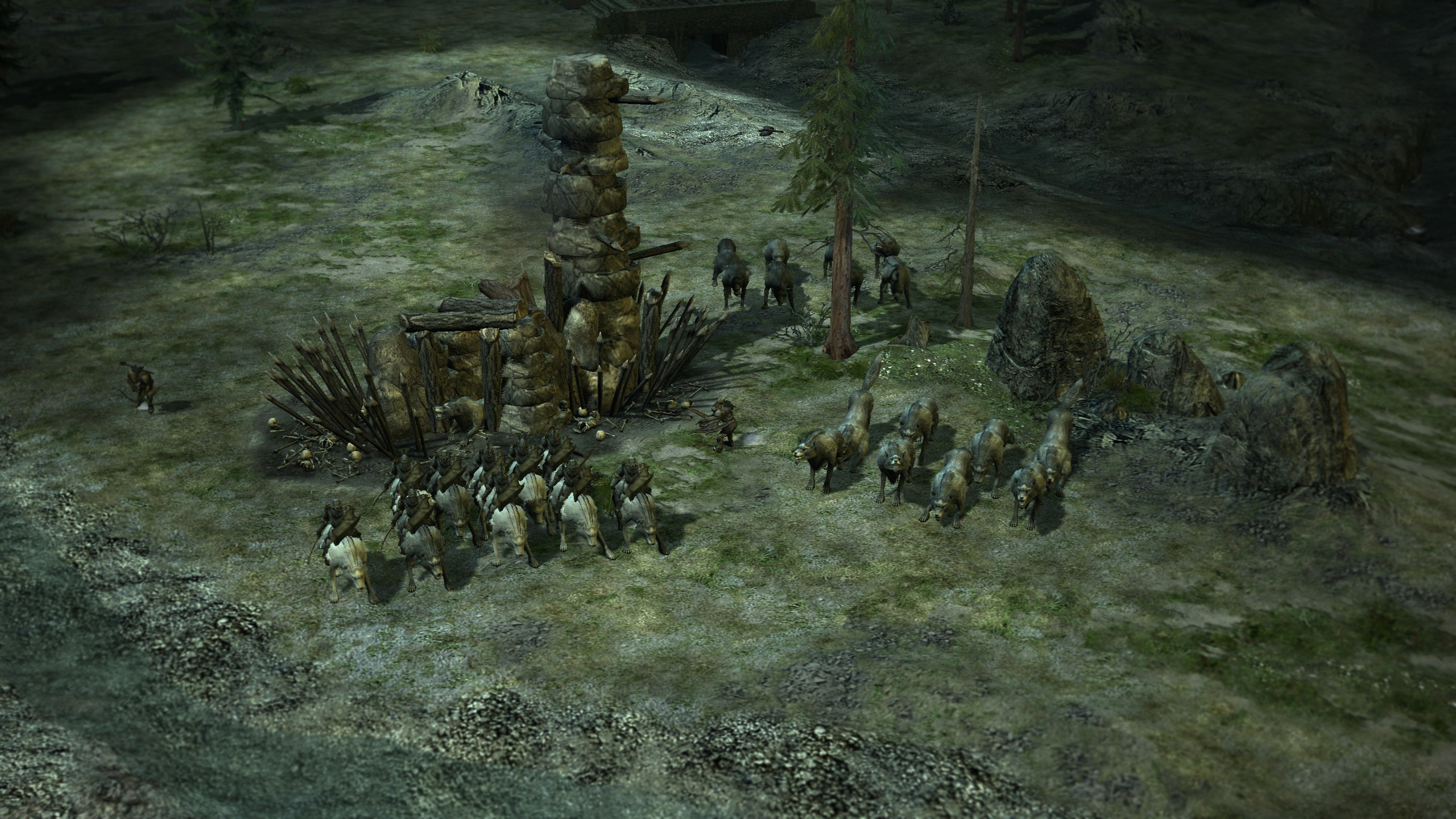 That's it for this article. The next release isn't far away!

I have to say these changes are fantastic, really pleased that MM now has a very clear identity and is no longer sort of hobbled together, fantastic job

I am glad that Azog is dead.

Technically, Azog died during the Battle of Azanulbizar by the hands of Dáin....

Very nice to see this article! Seems like you forgot to mention the Stone Giants, but that's okay.

Dear creator, congratulations on your work and to the entire age of the ring team.
Just one question in the next release, will the remodeling of Lothlorien gondor or other factions come?

By the way the spectacular campaign I have never seen one like it, bravo

Love the content guys! The faction just keeps getting better and better.

What your saying is your arrogant parasites who think your vision is better then Jackson's, despite the fact you leeched off most of his designs and stole his stuff. Arrogant fuckwits.

Go punch a wall. I hear it helps.

Well, in the books it says that Azog died in the battle of Azanulbizar, but Peter Jackson greatly changed the storyline concerning Azog.

I think it's great that the AOTR Team follows the spirit of Tolkien instead of the changes Peter Jackson made when it comes to Azog. I'm not saying that the movie was bad or anything like that, but Tolkien's story is the right one.

Speaking of Azog: he was originally not CGI. This was his original look " Pbs.twimg.com " but later on, they made him CGI, not sure why...

The concept art you shared was actually a piece done for Bolg, the original prosthetic Azog was completely different and much smaller but they changed it last minute to the CGI, the prosthetic orc was still used as a henchmen in the first half of UJ. Here is a clip of behind the scenes of the original Azog, Peter wanted a change because they wanted him to "stand out more".
<https://www.youtube.com/watch?v=-2GXUooP7RA&ab_channel=CGMeetup>

Are you buddy related to P.J? If you don't like go and make a mod for yourself, arrogant fuckwit.

Azog is a little bitch

I am neither happy nor sad about Azog to be honest. I would still enjoy playing him, but if he has to go so be it.

That said, I am happy to see that you care so much about projecting your vision, instead of dumping every possible element on the faction and call it a day. I can't wait to see your view of how the Misty Mountains should be.

Thank you for continue giving life to this game!

That's wonderful!
Thank you for taking the brave decision of doing it the way you feel it right.
Those changes are perfect!

This change does seem to make sense, as Azog's death in the Battle of Azanulbizar should be the motivation to Bolg's campaign to wipe out Durin's familial lineage.

I personally always liked Azog, but understand that this is your mod and probably will end up liking bolg and the other new guy anyway. I’ve always just kinda liked the hobbit cause they’re fun and I guess I take the issue of book vs movie less seriously, but as it’s a big deal to other people I don’t really mind the change. I wouldn’t mind a small submod or patch made by the community to include Azog just for fun sometime, though.

I still hold out hope for RotWK: HD Edition. Anyway, mostly good changes all around. As for Azog, it's your mod. If he was fun to play, I wouldn't mind having him (he was in RotWK anyway), but if you chose against, I don't care either way.

I love the changed and definitly gonna be great!

Too Bad. Azog was an awesome Hero! But this is your game and your vision. I have nothing but thanks to give! Awesome work on all the other changes!

Is this already out yet?

No, we will not do this.

Will you please add my favorite character, "Azog the Defiler". He's totally awesome and the coolest only improves anything he is in!