Well, it's that time of year again and 2016 being what it was, I was feeling the need to shoot something. 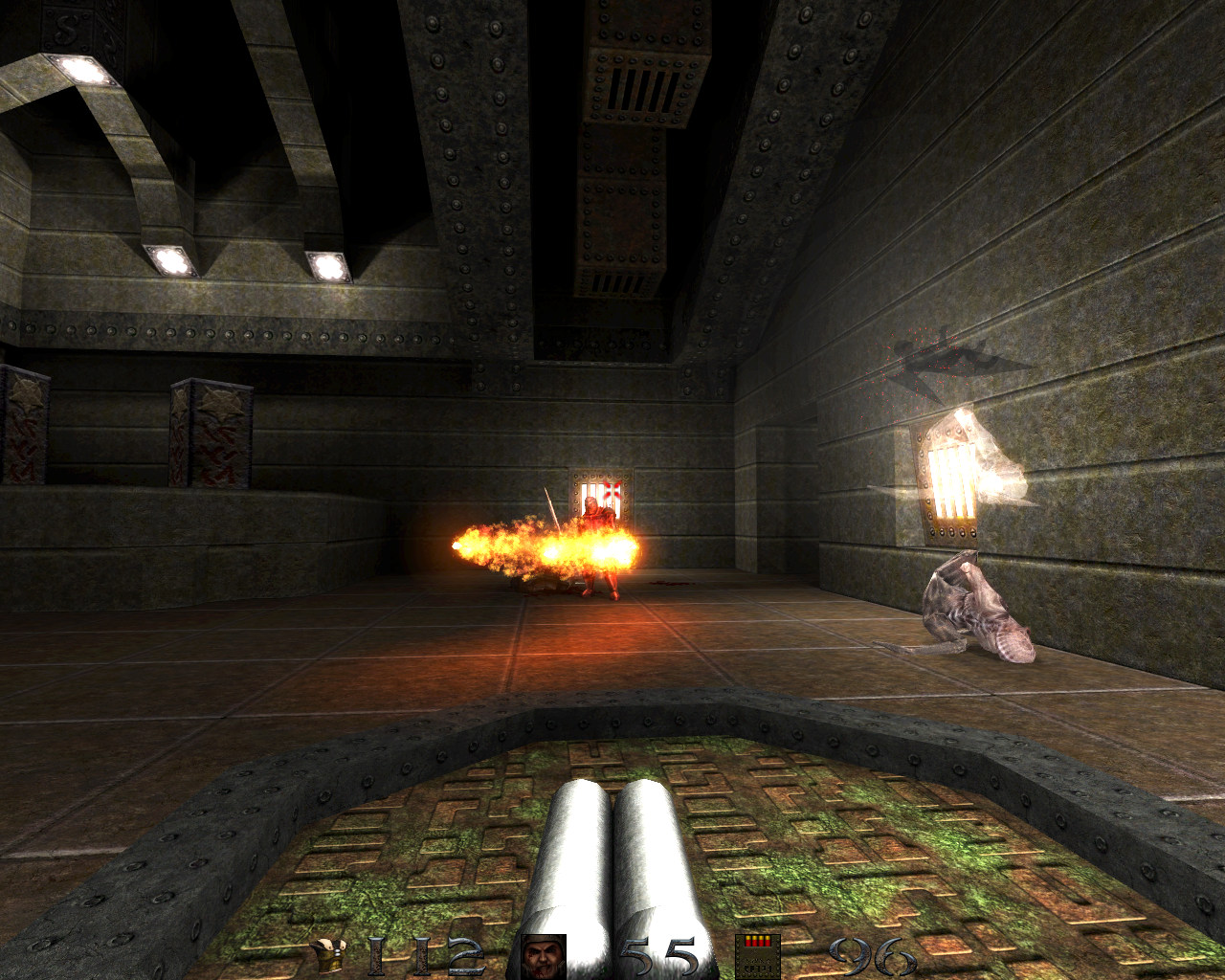 Well, it's that time of year again and 2016 being what it was, I was feeling the need to shoot something.
Enter DOPA (Dimensions of the Past), MachineGame's 20th-anniversary celebratory quake episode release.
But of course the path to getting these things running well is never smooth; so I made an expansion, ie suffered so that you don't have to (as per usual), figured it out, gave it it's own soundtrack, tied it up in a pretty blue ribbon, cast spells on it, etcetera.

Quake Epsilon - DOPA (Dimensions of the Past) - Mod DB

The soundtrack is Nine Inch Nails, which I feel is appropriate given he did the original game's soundtrack, and is a composite of his two free releases, Ghosts I and The Slip (both of which were released under a non-commercial, attribution, sharealike creative commons license). I just selected the appropriate tracks for each level, mixed/looped/volumed them properly together, and set up each level so it had an individual pair of songs - the result is a 1.5-hour soundtrack. 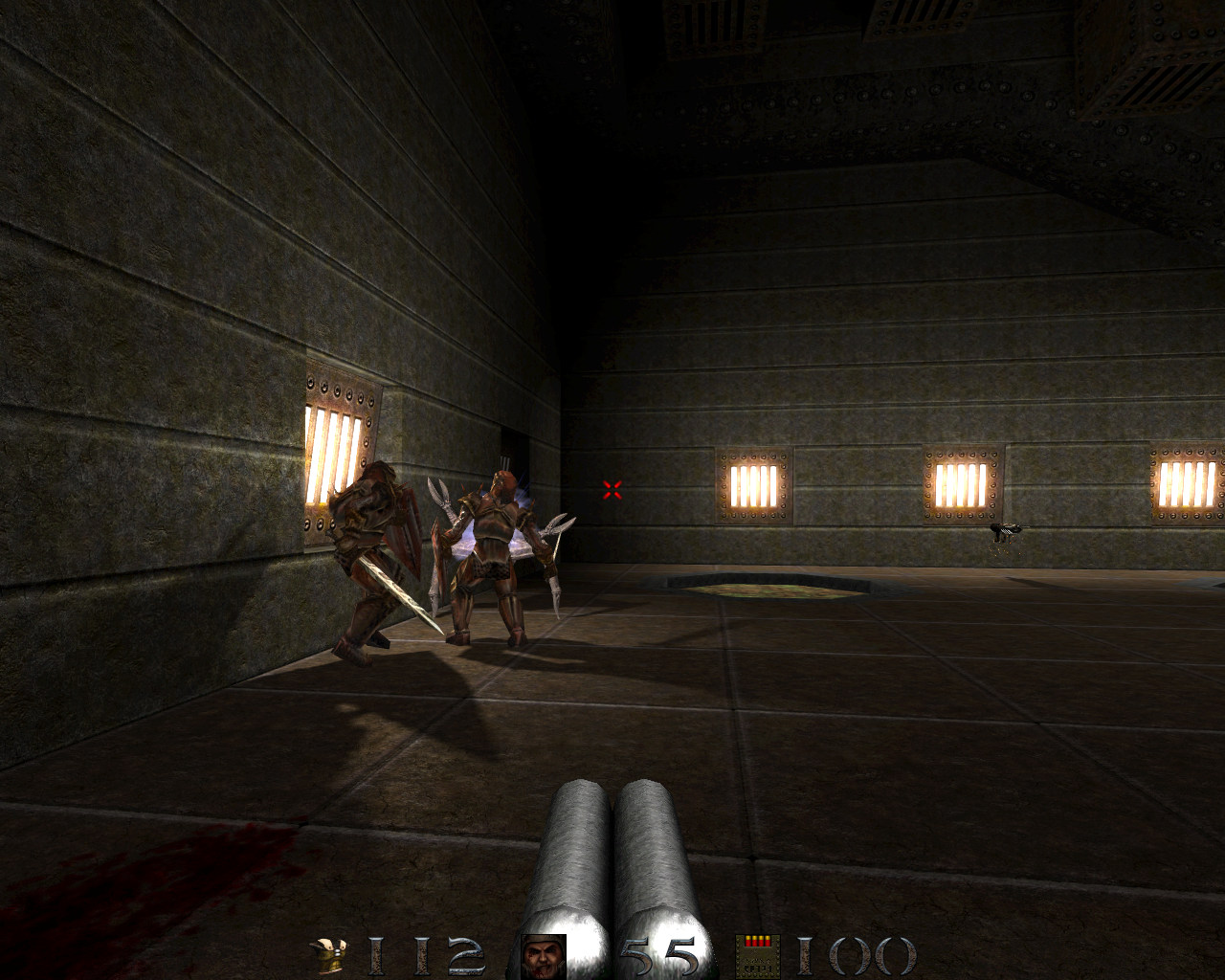 So now in the time I take away from constructing voodoo dolls of certain presidents, I release this into the wild, where it belongs. Run free, little lamb:
Moddb.com

Also I did some updates for the other packages, of minor and major degrees dependent on the package in question: new versions can be found in the downloads section, with additional options on the epsilon website. Summary of changes:

DOPA - improvements over original:
1.5-hour soundtrack based on NiN's free albums 'Ghosts I' and 'The Slip'
the usual high-quality texturing, models, effects via epsilon build
better lighting courtesy of BloodVengeance (with some corrections by myself)

The Myths:
Update to lighting on map 3
Improved fiend skin

Lastly, I just wanted to mention that as of the v3.2 (sometime in 2015) Nvidia graphics drivers, Ultra mode in epsilon experiences texture glitches on an nvidia graphics card, due to a bug relating to bump-mapping.
To fix this, rename "darkplaces.exe" to "GLQuake.exe" and edit your .bat files accordingly.
The other long-term solution is to complain to nvidia - be my guest:
Nvidia.com

You can also work around this by using 'High' quality mode. Or a really old driver version.
Also the epsilon website has moved.

And now, I bid you adieu; there are many things to do before the new year is upon us.
Peace.

lol i didnt see it was with epsilon ,good going man hope to play this soon at home xD Merry christmass

edit: i do miss trent reznor,s sounds and music tho :p

Merry Christmas to you too!
Both sound and music are Trent's in DOPA, not sure what you're missing though.

Good job! Merry Christmas Mate! And a good start on 1st of January 2017!

Great work! Is there any chance we'll see an Epsilon version of Arcane Dimensions?

1 - It looks like I'm missing at least one texture for some strange reason.

2 - I fired up Quake itself and everything looks fine, but a lot of other level packs and TCs are practically pitch black or broken unless I turn rt_world lights off (or remove the RT lights PK3 files.

So the white/missing textures were caused by reflecting_overload with 2016 DP builds and there is apparently a fix for that.

Can you re-upload the fix file? Dropbox says the files isn't there anymore.

Don't use latest darkplaces, I've asked this question before. With Epsilon it runs slower and missing a lot of smoke effects, etc.

Even with regular version of Quake, non modded, I suggest using only the latest stable release, and not development builds.

Actually, the latest version this past week got a performance increase. The last "stable" release is over two years old and DP has had tons of bug fixes since then. Smoke effects are working fine in the current release.

I'll do a test and check FPS in both.

On current nightly build it renders correctly and I get 300 FPS.

By the way, smoke effects are working with latest stable and latest development release of DP, but with DP version that comes with Epsilon there is much more smoke.

Take a look at the difference in smoke effects - DP that comes stock with Epsilon vs latest DP (or any newer version of DP for that matter).

Yeah, some of the "reflecting overload" effects in the start map weren't working for me initially. I fiddled with some settings and they are working for me again. I get the smoke coming up from the lava, the light beam out of the window, etc.

If you don't mind, please post which settings you've changed. Want to stay as close as possible to the original Epsilon with newest DP.

And yeah, latest DP does run quite a bit faster.

I'm trying to isolate which change fixed it. I'm pretty sure it was something in autoexec.cfg and/or config.cfg and it drove me nuts when I couldn't get it working initially.

I'll see if I can isolate the specific setting.

On current nightly build it renders correctly and I get 300 FPS.

I found the file with the reflecting overload fix on the quakeone forums. But how do I use it with epsilon?

Never mind, figure it out. Just replace textures.shader inside id1\reflecting_overload_xolveedited-ultra.pk3

The fix is at Quakeone.com

dimensions of the past, dopa, epsilon, quake