Today, the MechWarrior: Living Legends team brings you a glimpse into current project development, some new features for the upcoming 0.4.0 release and some new additions to the MWLL team.

Today, the MechWarrior: Living Legends team brings you a glimpse into current project development, some new features for the upcoming 0.4.0 release and some new additions to the MWLL team.

Our July/August recruitment drive has paid good dividends and we are proud to welcome the following members to the MWLL Development Teams:

The team is still accepting applications for qualified applicants per this thread, in particular we are still looking for a qualified animation artist. If you are interested in contributing to the team in one of the requested positions, please submit an application thread today!

Cujo has been hard at work on the one of our new medium tank models, the Ares. As you can see from these renders, the model is coming along nicely. To realise the model in practical MWLL terms the missile pods have had to have their mount positions slightly modified when compared to CBT line drawings. You will also note that the player cockpit on the CBT line drawings shows it to be low-hull mounted, in the MWLL version the player will still have a first person view that is tied to the turret.

The renders below are high-poly detail with 223k tris. The treads are still pending some additional work to improve their compatibility with the Crysis physics system, but the overall model is essentially complete and has moved into texturing and in-game implementation phases. 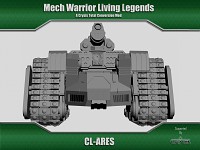 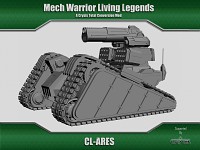 In an admirable collaborative effort from our development team, the Morrigu has had final polish applied. It has now moved into final testing internally and is flagged to be included with 0.4.0

The Morrigu is classed as a heavy fire support tank, and in MWLL it fulfills that role very well with some of the most devastating loadouts available to our tracked armour category. Many thanks to our fine developers: Sherrell, Sturmadler, Keeper and Toth for their efforts in bringing this asset to life. 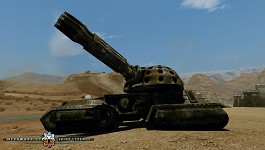 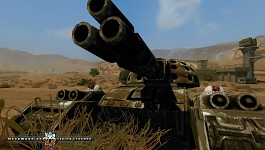 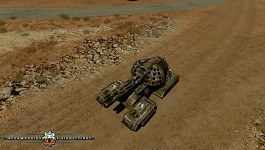 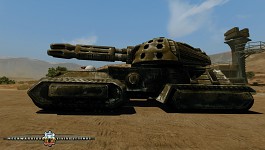 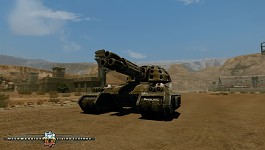 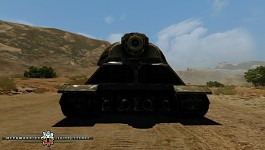 Shadowkiller and his Level Design team have been busy at work producing maps for the upcoming Terrain Control game mode. The first level to reach presentation quality is Death Valley:

"Set on a remote and desolate moon, Inner Sphere and Clan forces battle to control the meager resources of this strategic outpost."

TC Death Valley supports all of the asset types currently available in MWLL; 'Mechs, tanks, VTOLs, aerospace and battle armour. The map has several areas of open, flat terrain for long engagement distances as well as rugged rock outcroppings and base/factory areas that allow for close-ranged combat opportunities. The moon is under a constant barrage from incoming meteors. 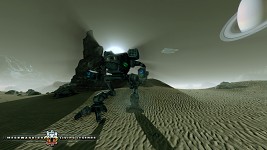 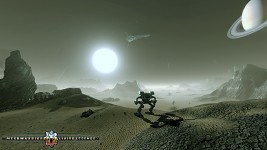 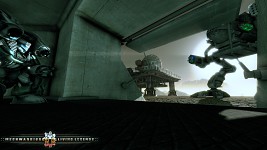 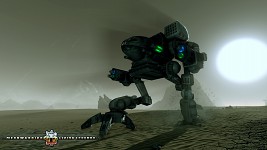 In the interest of bringing MWLL game modes more in-line with historical game modes of the MechWarrior series, the next major release will undertake a renaming schema as follows:

These changes will affect community maps, which will need to have a minor naming change and re-exported to the playerbase. All existing Official MWLL maps will be included with this name change.

Next Release 0.4.0 Estimated for End of September

We are currently on track for the release of MWLL Public Beta 0.4.0 at the end of September. This release will include the new Terrain Control (TC) game mode with supporting maps as well as numerous other features, extensive bug fixes and a hearty portion of surprises... This is KingLeerUK, signing off. I'll see you on the field!

Lookin' good, keep it up!

Gah I wish this was for crysis warhead or crysis wars, i cant get my crysis to work properly.

Way too much awesomeness.

Cool i got to check this out when you release i havn't got around to playing it yet.

Gotta agree you on that Nonsense i bought crysis warhead instead of crysis ;(

does it work with warhead/wars yet?

The port to Crysis Wars should be soon. If not 0.4.0, it will most likely be the next one. Assuming key team members involved with the port don't die or get tied up.

You guys should consider making this into a seperate game :)

i love the excellent job you're all doing on this and wish i could play it! win7, i hate u.