Good lord, it’s May already. This newsletter will spotlight some more enemies coming for the fire ant update, with a particular focus on nature’s favoured form – the beetle. We also have some talk about new AI systems that we’ve been working on over the past few weeks, which will be used in the last of the campaign levels and eventually in freeplay too!

Good lord, it’s May already. This newsletter will spotlight some more enemies coming for the fire ant update, with a particular focus on nature’s favoured form – the beetle. We also have some talk about new AI systems that we’ve been working on over the past few weeks, which will be used in the last of the campaign levels and eventually in freeplay too! 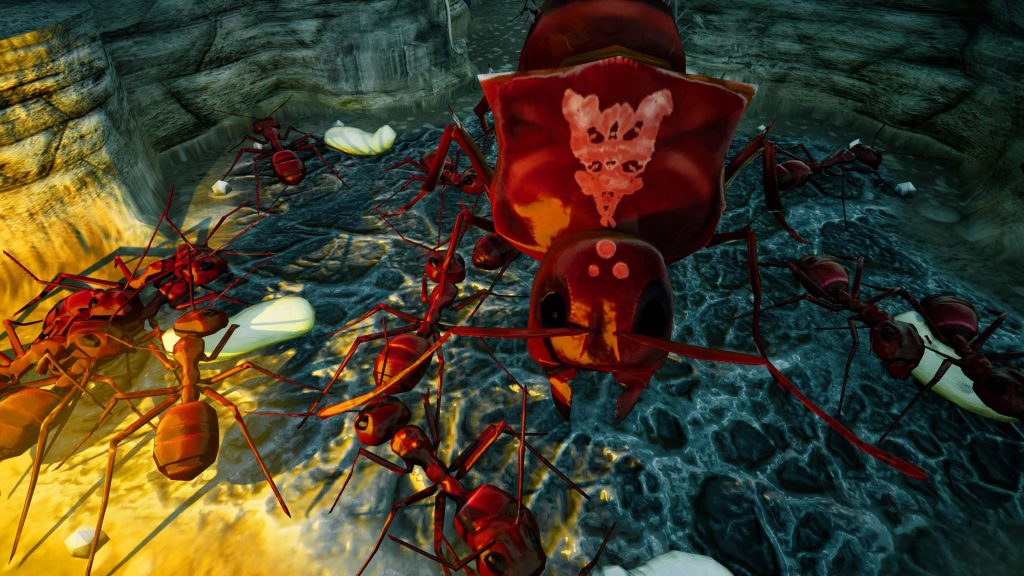 We’ve still got quite a few critters to show off as we complete work on them, as well as a few we don’t want to spoil until we get very close to release time.

Ah, beetles. They are the most diverse group of insects, and arguably of all animals. They appear throughout human culture and history, in art and science – they exist just about everywhere that we do. Naturally, we need more beetles in Empires of the Undergrowth (but perhaps not so many as to cause an uprising…) so we have a few more joining our various tiger beetles and rove beetles in the upcoming fourth tier.

Bombardiers are a kind of well-armoured ground beetle. There are several species – this one is called Brachinus alternans. They get their name from the distinctive popping sound they make when threatened, and a closer look at the cause of this sound reveals a defensive system that can be deadly if you happen to be small and in its way. 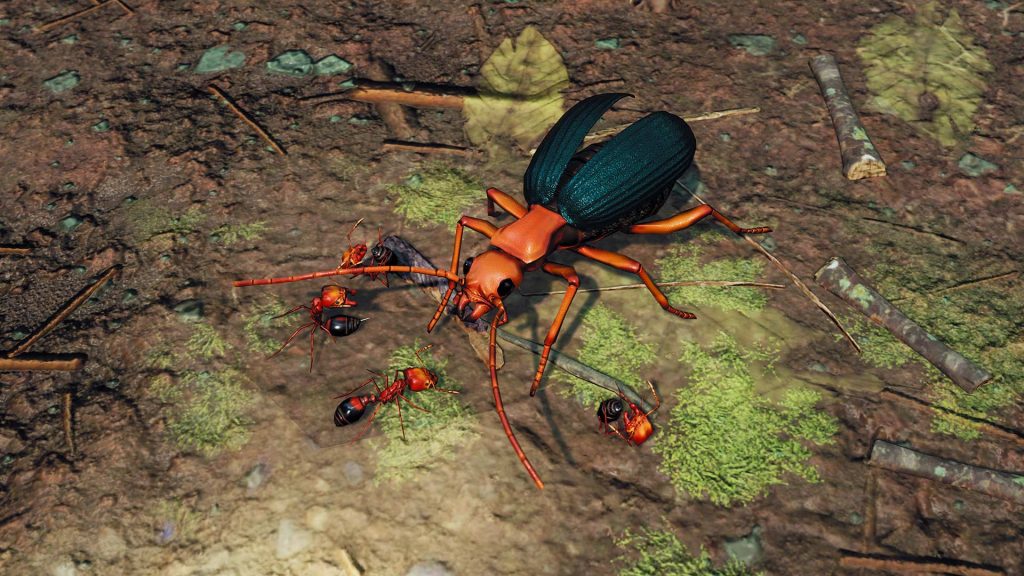 A bombardier beetle faces off against fire ants

By mixing various chemicals and enzymes together in a special internal chamber, the beetle produces a violently exothermic reaction. The resultant mixture reaches close to the boiling point of water and is expelled by the rapid rise in pressure through an opening pointed at the beetle’s enemy. 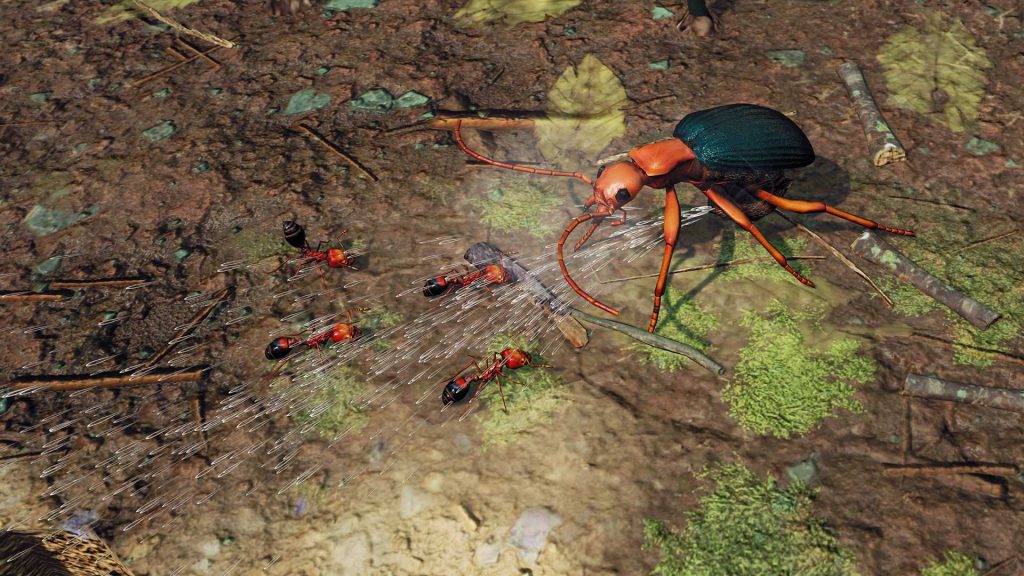 Near-boiling liquid is explosively fired at the beetle’s enemies

If you’re a large vertebrate predator, this irritant is likely to be enough to put you off having a bombardier beetle for dinner. If you’re the size of an insect, however, the momentary boiling temperature of this liquid can easily be fatal. With the large area of effect this defensive spray has, it’d be wise to consider carefully whether the bombardier beetle is worth the inevitable casualties.

Mimicry is seen everywhere in the animal kingdom – creatures evolve to look like more dangerous ones, which gives them a deceptive advantage. The false bombardier beetle (Galerita bicolor) has evolved to look almost identical to its namesake, with some minor differences in colouration and morphology. 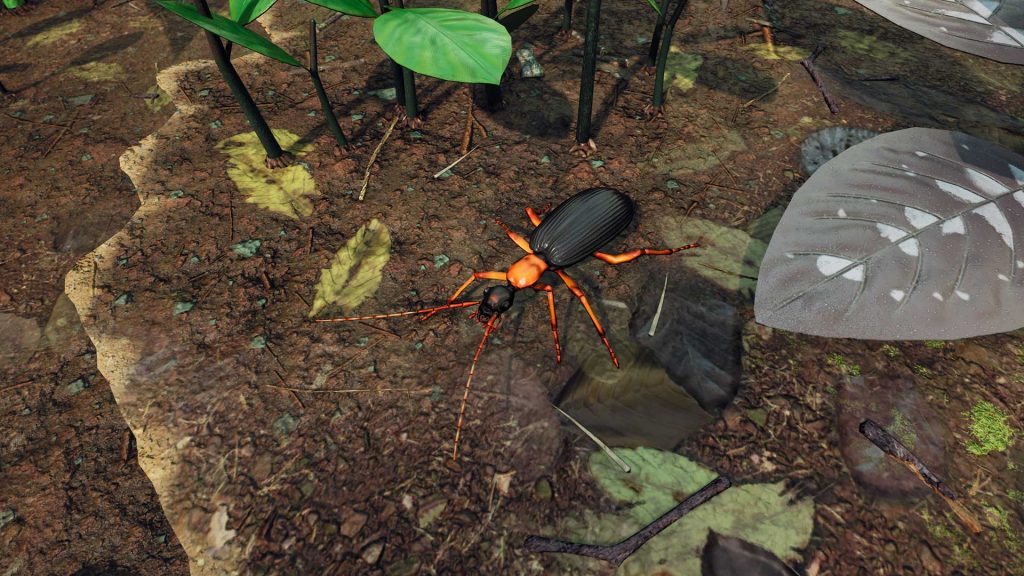 An impostor among us – a false bombardier beetle looking sus

This helps it avoid predation, but the false bombardier beetle is not without defences – it’s significantly larger than the true bombardier, has the same chitinous armour, and uses muscle action to spray a solution that is mainly made of a familiar substance – formic acid. 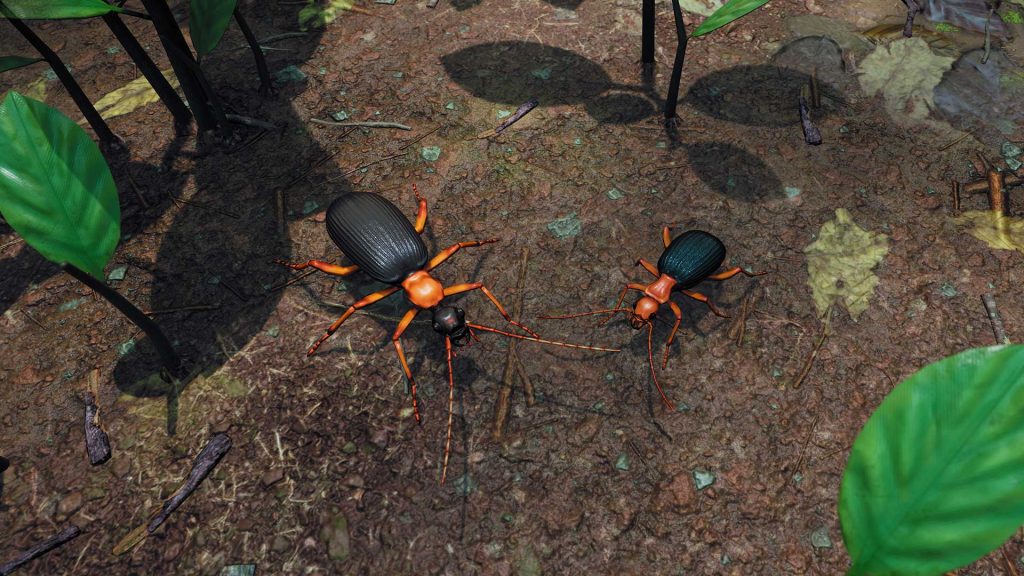 Size comparison to the false bombardier (left) and the true bombardier

Whilst not as deadly as the boiling liquid that is explosively fired by the true bombardier, formic acid will still do considerable damage to small creatures. It’s the same acid used by the ranged wood ants of the 2nd tier, and it’ll have a similar in-game consequences – an area of effect venom-type attack.

Cleridae – the checkered beetles – are distributed worldwide. This particular species is called Enoclerus rosmarus, and it’s a common sight in North America. They’re active hunters, and their preferred habitats are moist and sunny – qualities which will bring them into conflict with your fire ants. 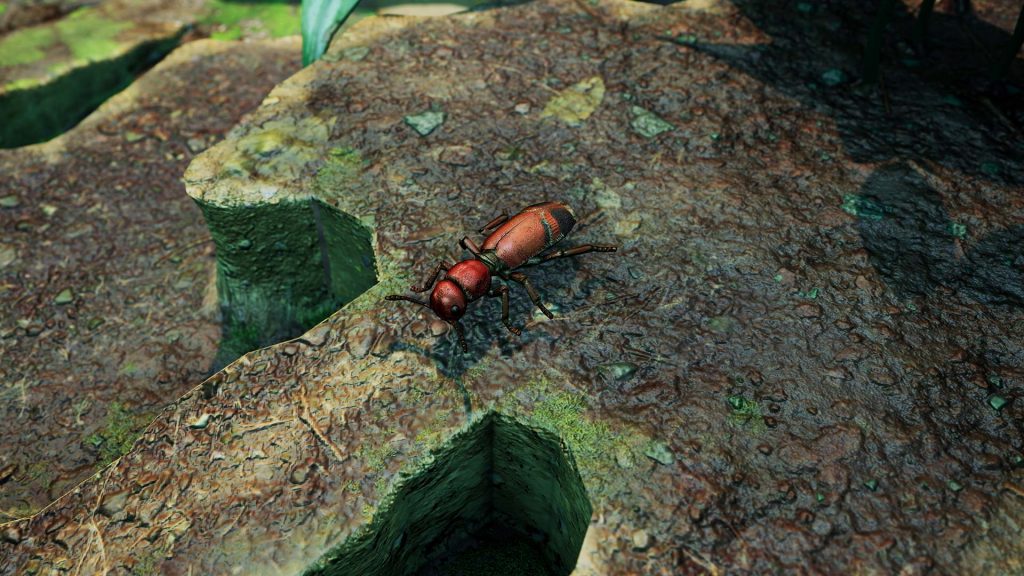 A checkered beetle minding its own business

Checkered beetle larvae are also hunters, which in Empires of the Undergrowth will give them a similar role to rove beetle larvae in previous levels. They’re more vulnerable in this state, before they develop the chitinous armour they have as adults – but they’re still a force to be reckoned with. 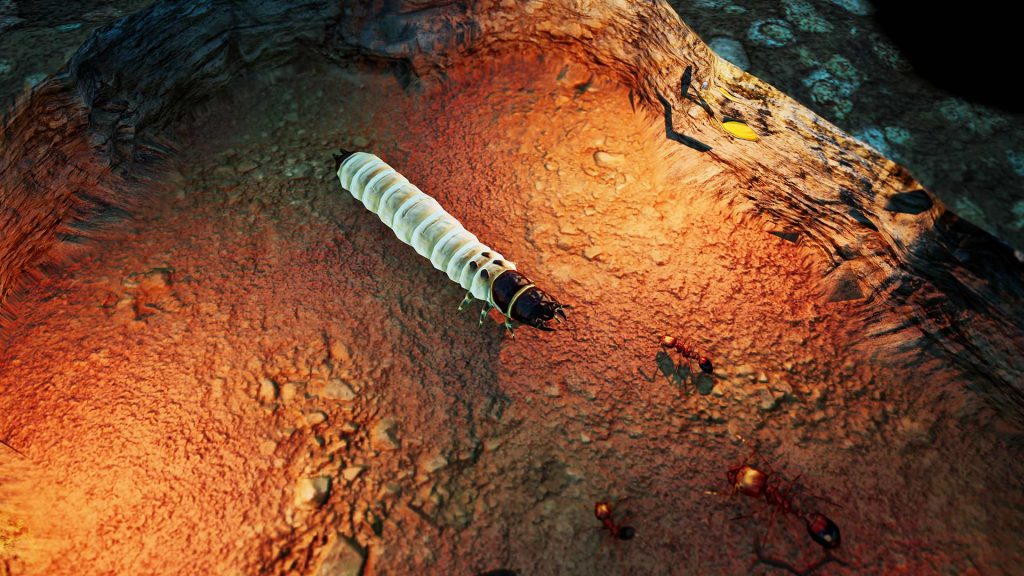 At the moment, the various AI colonies we have in the game are either heavily scripted (as in 2.2) or reliant on preset “points of interest” which they use to decide where to send their forces (3.1, freeplay). This makes them relatively robust but doesn’t allow them to make very complex decisions on a changing battlefield. Liam has been working on a scanning solution that will let colonies periodically scan the surface for interesting things, giving them the ability to make much more relevant choices.

These will be used on all of the remaining campaign levels, all of which will feature AI colonies in some form. Eventually, we hope to transplant this feature to freeplay too – after fire ants, we are likely to do another big round of freeplay changes to bring that game mode closer to its release form.

Two colonies scan for points of interest on one another – light orange is the real scan, the maroon is a skipped scan where it decided to use saved data from a scan not so long ago in the same place

I’m sure many of you are familiar with the fan wikis that crop up; fandom.com is one of the more prominent ones. We’ve been slightly bemused by these and not entirely sure what to make of them – up until very recently, they were simply placeholders with very little in the way of articles. However, thanks to some dedicated community members, the Empires of the Undergrowth fandom.com wiki has had some big content additions over the past couple of months.

Particular thanks to thanhmk28 on our forums for putting a lot of time into the fandom wiki, and writing / formatting a majority of the articles so far. On it you’ll see creature stats and abilities (taken from a version of the spreadsheets that the game uses that we host on our website) that might well be useful for people looking for a more solid idea of what various creature’s strengths and weaknesses are until we implement a way to see these in the game. 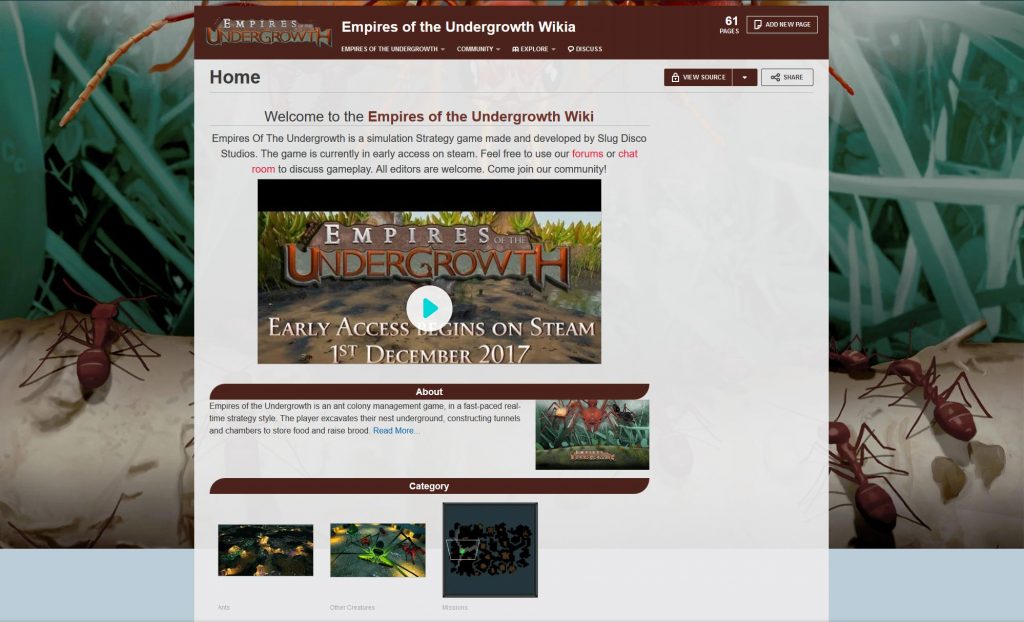 There’s even a dedicated spoiler page for the upcoming 4th tier update, which details all of the new stuff we’ve revealed in Screenshot Saturdays and these newsletters. This wiki is open to further contributors, so if you’d like to help thanhmk28 out with writing some new articles then by all means do! Our community continuously proves itself to be one of the best there is, and we couldn’t be more thankful for that.

For final release, there will be plenty of information accessible in-game with our own encyclopedia system. Even after that’s implemented, there will always be a place for community-driven wikis like these – they’re definitely an appropriate place to post guides, creative strategies and suchlike that won’t be in the game itself.

A couple of months ago, Tom Johnson released his evolution simulation game Ecosystem into early access on Steam. Slug Disco are the publishers for it, and it’s been a joy to see how it’s been received and how community feedback is already shaping the direction Tom has decided to push things.

About once fortnightly, Tom has been sharing his progress and direction with us and we’ve been posting these as articles on the game’s Steam page. He’s now at a point where he can share the path he’s chosen for Ecosystem’s first major update, which will focus on graphs and analytical tools so the player can see plant, predator and prey relationships in much greater detail than before. 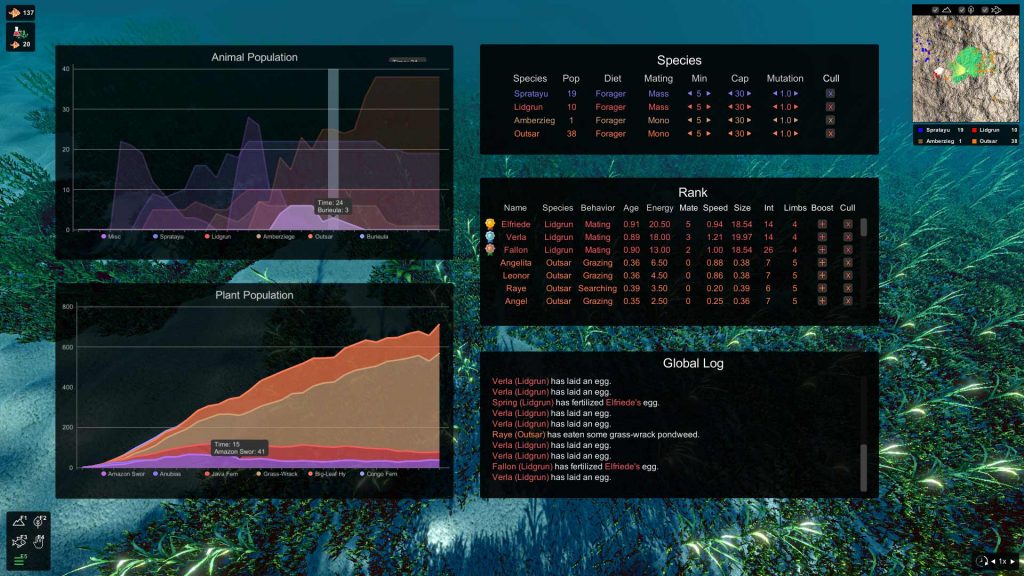 The graphs and analytical tools coming soon to Ecosystem

Ecosystem continues to progress rapidly as a project and if you have an interest in speculative evolutionary biology, serene aquatic environments, or even just producing abominations such as human-like fish then we heartily recommend giving Ecosystem a spin. It has a demo which shows a lot of the basic features, but the full thing is gearing up to be something altogether more special.

Seriously, I feel like this section is just for me – every time I write a newsletter, I look forward to the bit where I have a browse through some recent screenshots posted to our Discord or uploaded to the community, and select three of my favourites. If you’d like to participate, by far the easiest way to get your screenshot to us these days is Discord. You can also email them directly to mike@slugdisco.com. 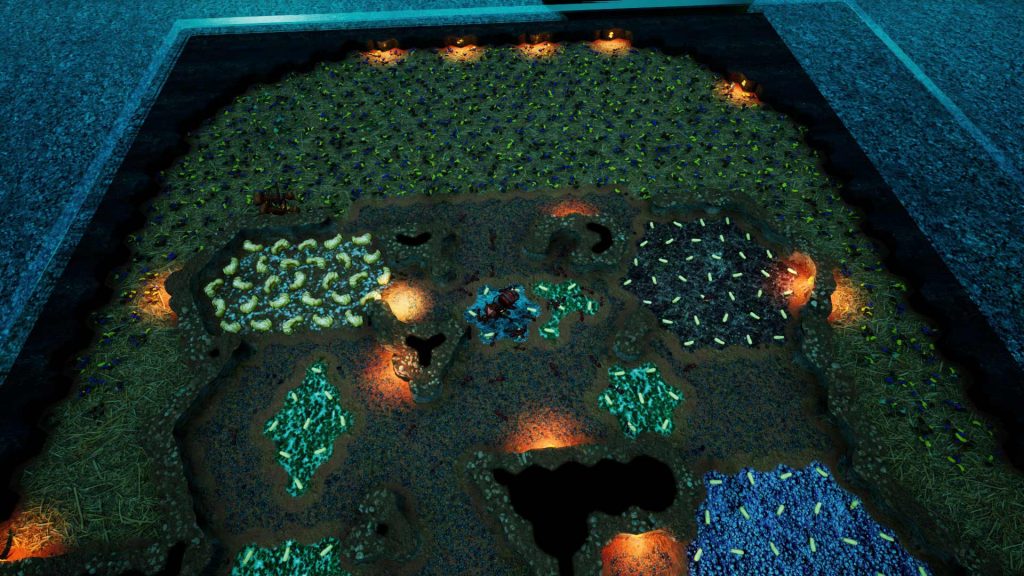 A pleasing formicarium from BrickyGraph631 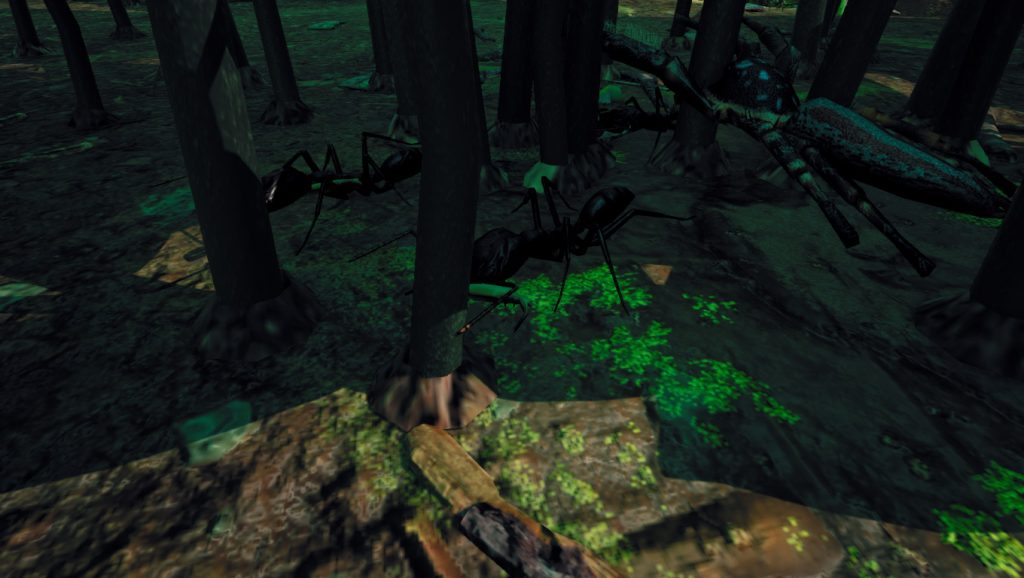 Trapjaws under attack from a hidden jumping spider from Rarity 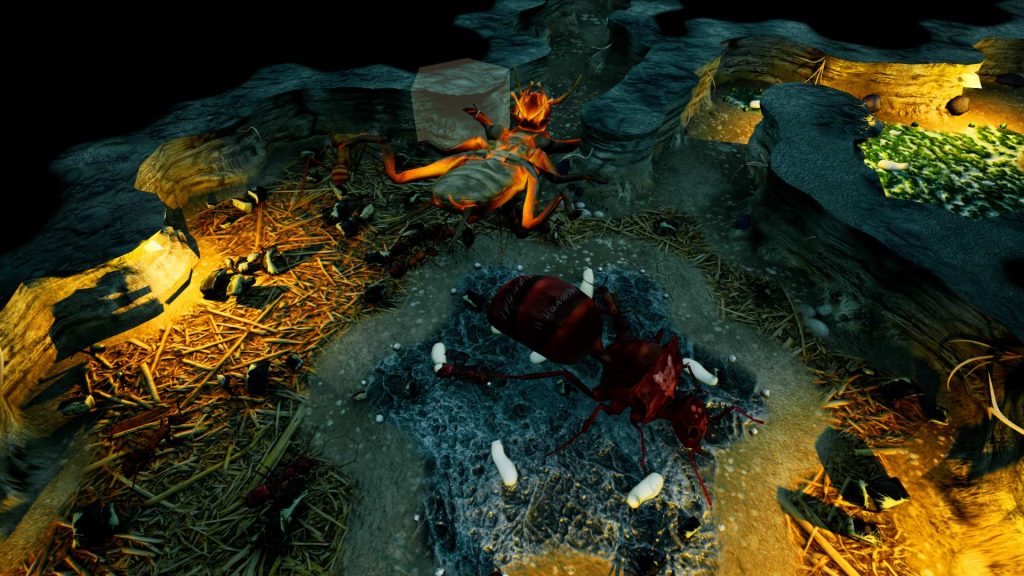 A close call in extra level Excavators from Crazlex9