Third part of the devlog. How did the enemies of Super Hyperactive Ninja came to be? What do they do? Discover it in this article

In our previous posts, we explained some design choices, mostly regarding how the player interacted with the environment or the mechanics. But players will not be alone in the levels of Super Hyperactive Ninja, they will have to face hostile characters. It's time to talk about enemies!

Enemies will try to stop Kohimaru from recovering the stolen coffee!

The story of Super Hyperactive Ninja is quite simple:

The evil Shôgun wants to conquer the territories of Japan. To do so, first he invades the hidden village of Kohinomura, where it's said there is a legendary brew of coffee that grants unlimited power to the one who takes it. The Shôgun's army destroys the village, steals the coffee and kidnaps all the ninjas. All of them? No, the rookie Coffee-Nin, Kohimaru, managed to escape, and now it's his responsibility to recover the stolen coffee and save his fellows!

You might have noticed similar elements to "Asterix the Gaul" (the magic beverage, a village that keeps it "secret", an emperor craving with conquest...), and they are not a coincidence. Just like Asterix's Obelix, the Coffee-Nin can use the power of the magic beverage without having to actually drink it, but in latter's case, they have to take a constant supply of coffee or they fall asleep wherever they are!

With the stolen coffee, the Shôgun is making an ersatz to power up his troops! (And that's why there are scattered coffees around the levels, btw). Of course, he keeps the original for himself, so Kohimaru will have to fight to take the coffee from him!

We will talk about bosses soon, now it's the turn to discuss some of the regular enemies.

Enemies: They all want you dead

As the game is set on a fantasy Japan, we based the enemies on Japanese mythology and culture.

Basic enemies come straight from the original Hyperactive Ninja. There we had evil ninjas, monks, ghosts and ninja dogs, with their variations. And that's what we are going to explain today.

The player's primary way to attack is hitting the enemy from behind while being in Hyperactive Mode (we explained it in our first devblog). Hence, we needed a simple enemy to teach the player how to dispatch enemies safely.

A Mokujin (wooden person) is a training dummy supposedly used by samurai and ninja. As we needed to teach the player how to kill enemies with Hyperactive Mode, what could work better than a training dummy?

When Kohimaru bumps this enemy while not being in Hyperactive Mode, it will push him back a little. Mokujin cannot move nor turn, so they cannot hurt him in any way. As the player cannot progress further while being in normal state, they would try with Hyperactive Mode, which was introduced just before. 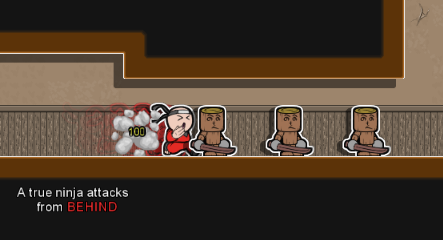 Should the player enter Hyperactive Mode, he will discover that the Mokujins explode when hit from behind. But now, there is a Mokujin facing the player! If the player keeps running to it, the Mokujin will attack and kill the player. 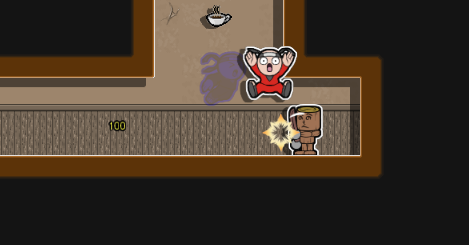 STOOOOOOP! If you approach a Mokujin by the front, it will activate and hit you with its sword!

Now the player has learnt that approaching enemies by the front is bad. Not that it was advised that a Ninja should attack from behind or anything.

Adding a little of movement

Mokujins are piece of cake. Just avoid hitting them from the front and you're set. But what if they could move?

That's why we have ninjas! While Mokujin could be considered a mere hazard, Ninjas are the first full-fledged enemy in our game. We needed an enemy to teach the player to wait before advancing. This kind of enemy also helps to build some tension, as (if you didn't remember), you need to complete the level before Kohimaru runs out of caffeine! 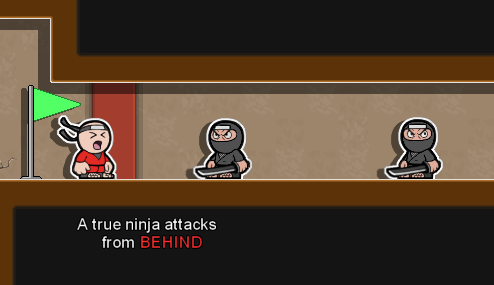 Two Black Ninjas. They only attack when you are nearly touching them,
so they are kinda dumb. But deadly, nonetheless

Ninjas come in different flavors: first we have Black Ninjas. These are basically Mokujin that can turn after a while, so players have to be wary when approaching them. Make them move along a horizontal path, and... 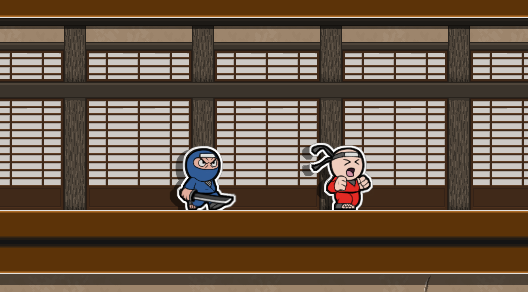 Blue Ninjas can walk, but still they don't attack unless they touch you

Then we have Blue Ninjas, which have a simple patrol. Still, these Ninjas only attack you when they are very near. We need something that can attack from far. 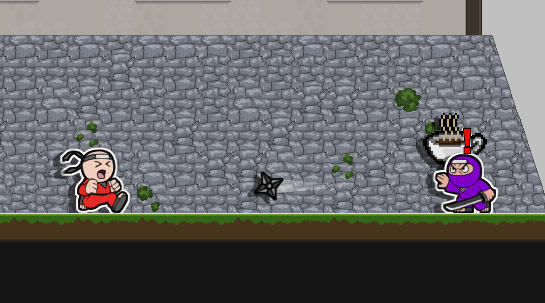 Purple Ninjas can also throw shurikens, in addition to the patrol. Yet, these enemies are quite static. They are either stationary or follow a simple patrol left to right. They only attack when the player gets into their area of action, and can be easily avoidable. 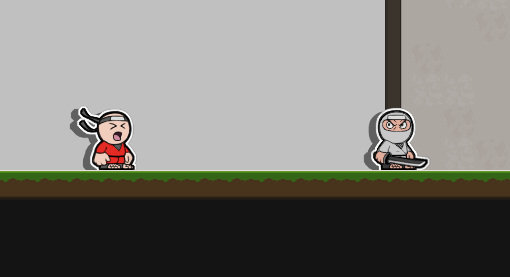 White Ninjas came to solve that. The White Ninja follows a patrol, can throw shurikens when it sees the player, but also starts chasing. It's like the king of ninjas. Anyway, you can get rid of him just by attacking from behind, like all ninjas before.

This is just the beginning, next article we will discuss other basic enemies in the game. What do you think about these? Tell us in the comments below!