It has been a long time since the last update and Extended Team©®™ has a lot to tell you.
First things first, this is no longer a 1-2 people's tiny little mod. No, the team now consists of whopping 6 and a half members so our potential at this point is countless times more than it used to be! Mapping, coding, modelling, even voice acting! You name it!
On the other hand, old project leader and main modeller CamKablam had left the Extended Team©®™ due to conflicting personalities between him and the rest of the team. Now our leader is trvps (better known on modDB as blsha).
With all the new people and without the old one, HL:E is now in a different shape and form, and also had entered Beta, so allow us to properly (re)introduce you to Half-Life: Extended!

This is a mod aimed at improving and expanding the vanilla experience and campaign. How, you may ask? Well, first of all we added all content from Blue Shift and Opposing Force, this was done to increase the diversity of weapons and enemies and also to achieve consistency between the original and it's expansions. You heard me right! Technically you can launch any BS or OpFor map in HL:E and it will work! But carrying over Gearbox's content isn't everything we did, oh no!
There's so, just so much more... And we will talk about everything in a second.

Oh, where do I even start on this one? Seriously, the amount of work done by CamKablam (who fortunately gave us permission to continue using his models) is something beyond human comprehension. Let's just say that there're 21 heads for HECU marines and 2 skins (a white and a black one), so 42 absolutely unique human grunts in total. How do you like that? And don't even get me started on scientists! To sum up, every single human NPC has about a dozen variations (and sometimes even more, as you may see). We're also planning to expand the variety and diversity of aliens, but for now the main focus was on humans for pretty obvious reasons. 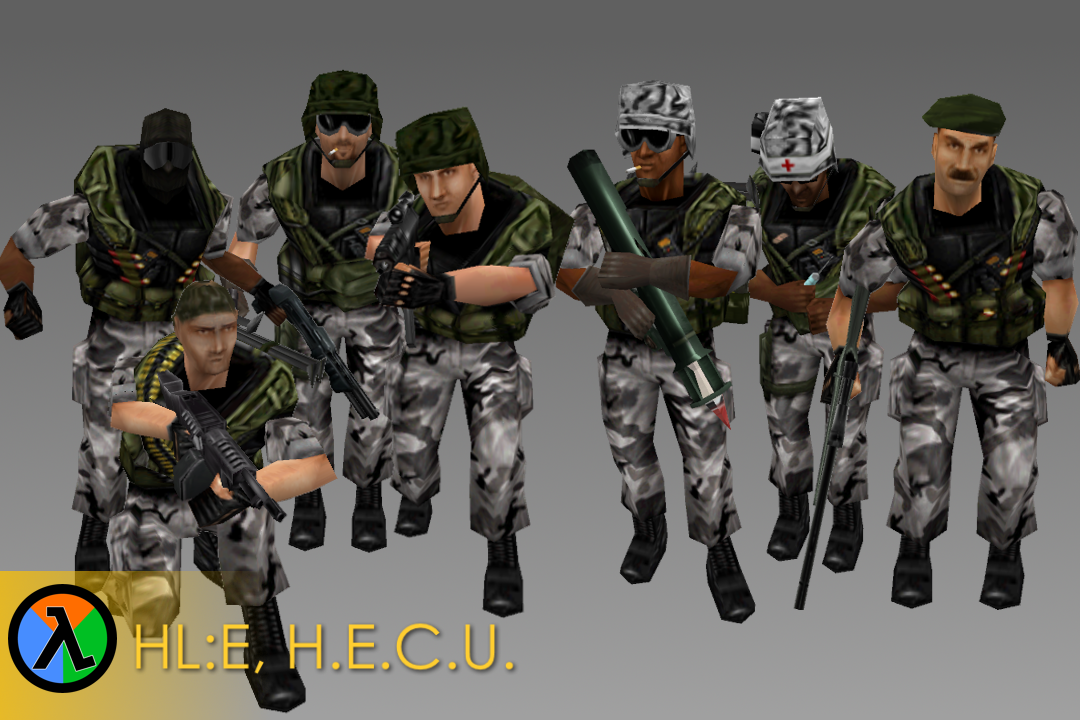 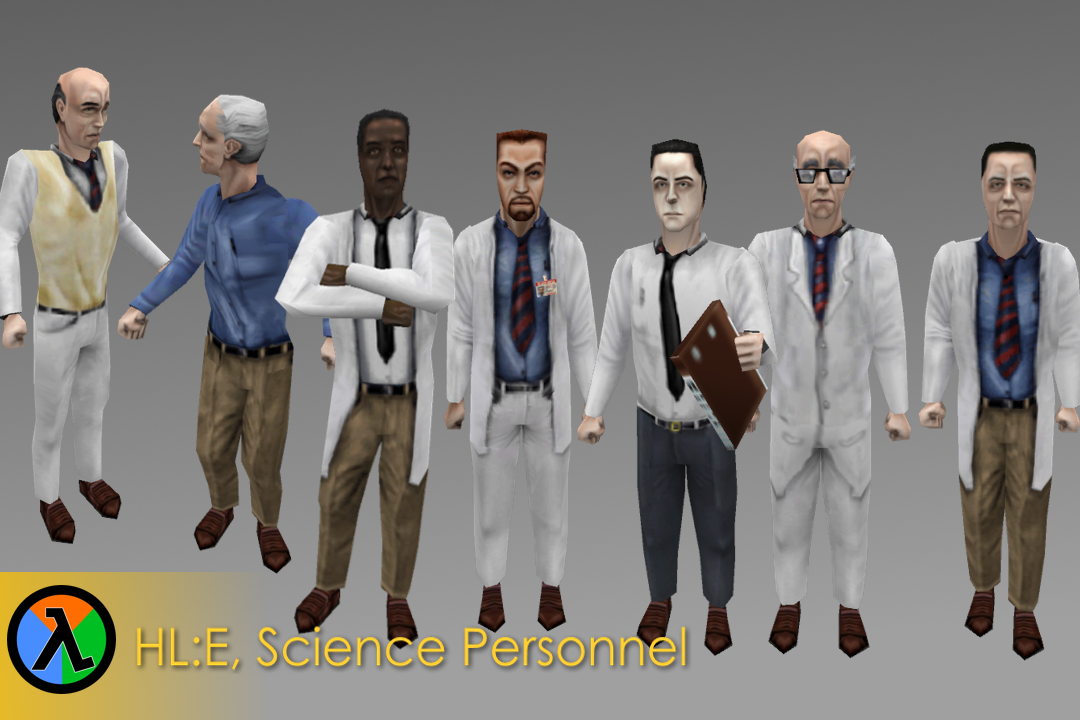 Let's take a little break from looking at models and look at maps. First, we merged as many maps as possible in order to reduce the amount of l o a d i n g s... We maintained the loadings between chapters though, so don't worry! c1a1f (Unforeseen Consequences) wasn't merged with c1a2 (Office Complex) or anything like that. 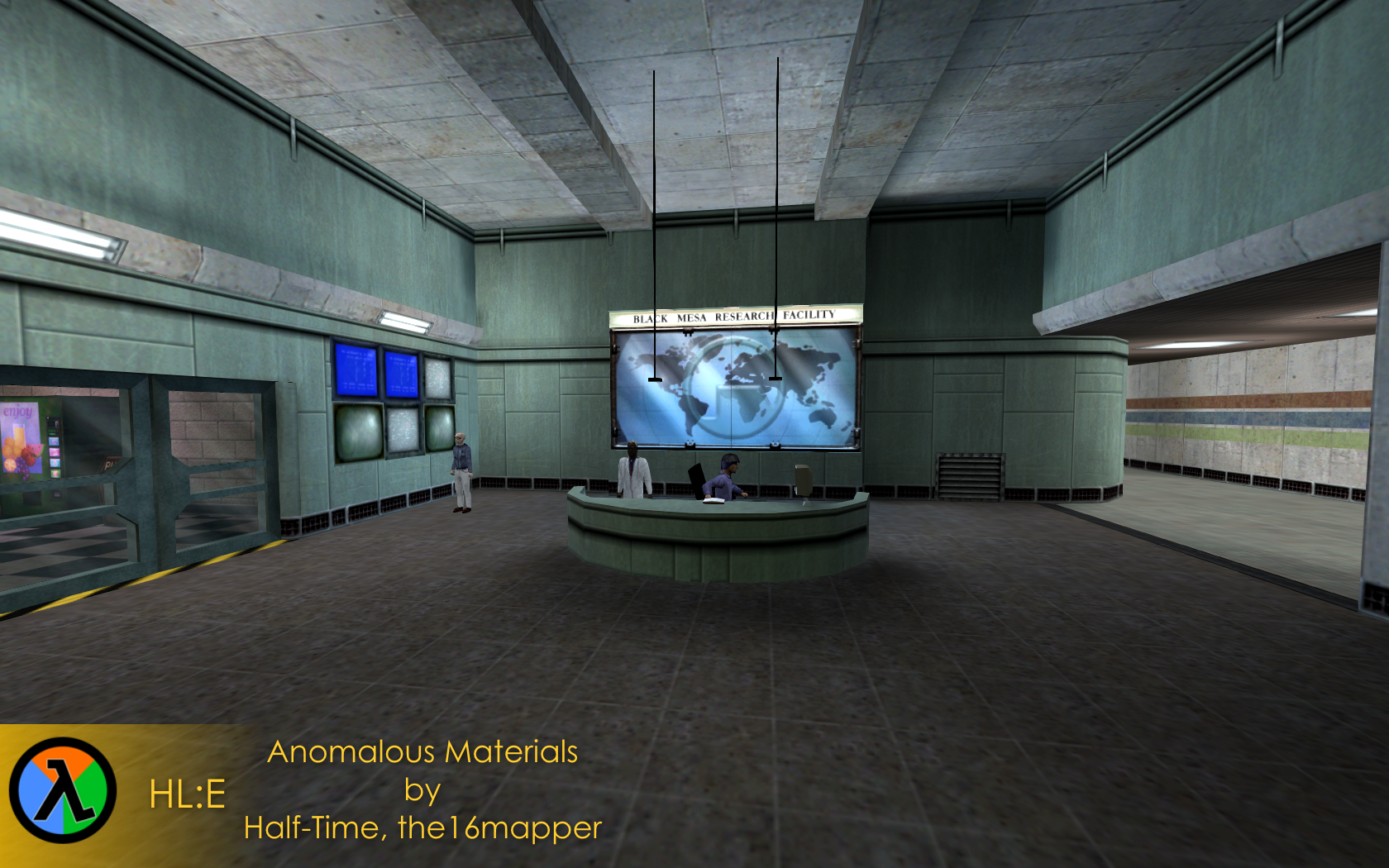 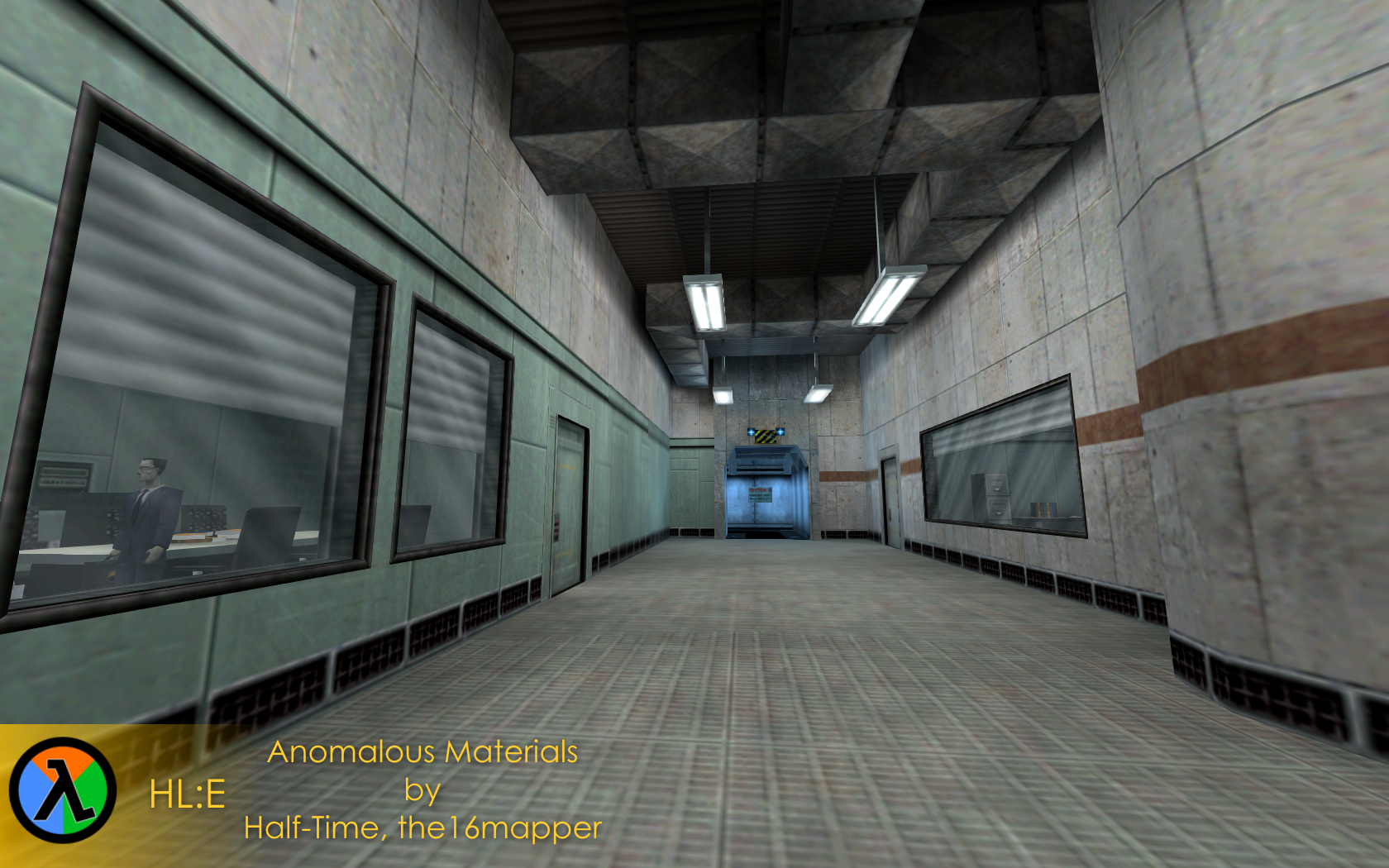 Second, we improved the orginal maps by adding some more details, scripted events or optional rooms here and there to make the entire facility more impressive in terms of scale, more pleasant to look at
and more believable. 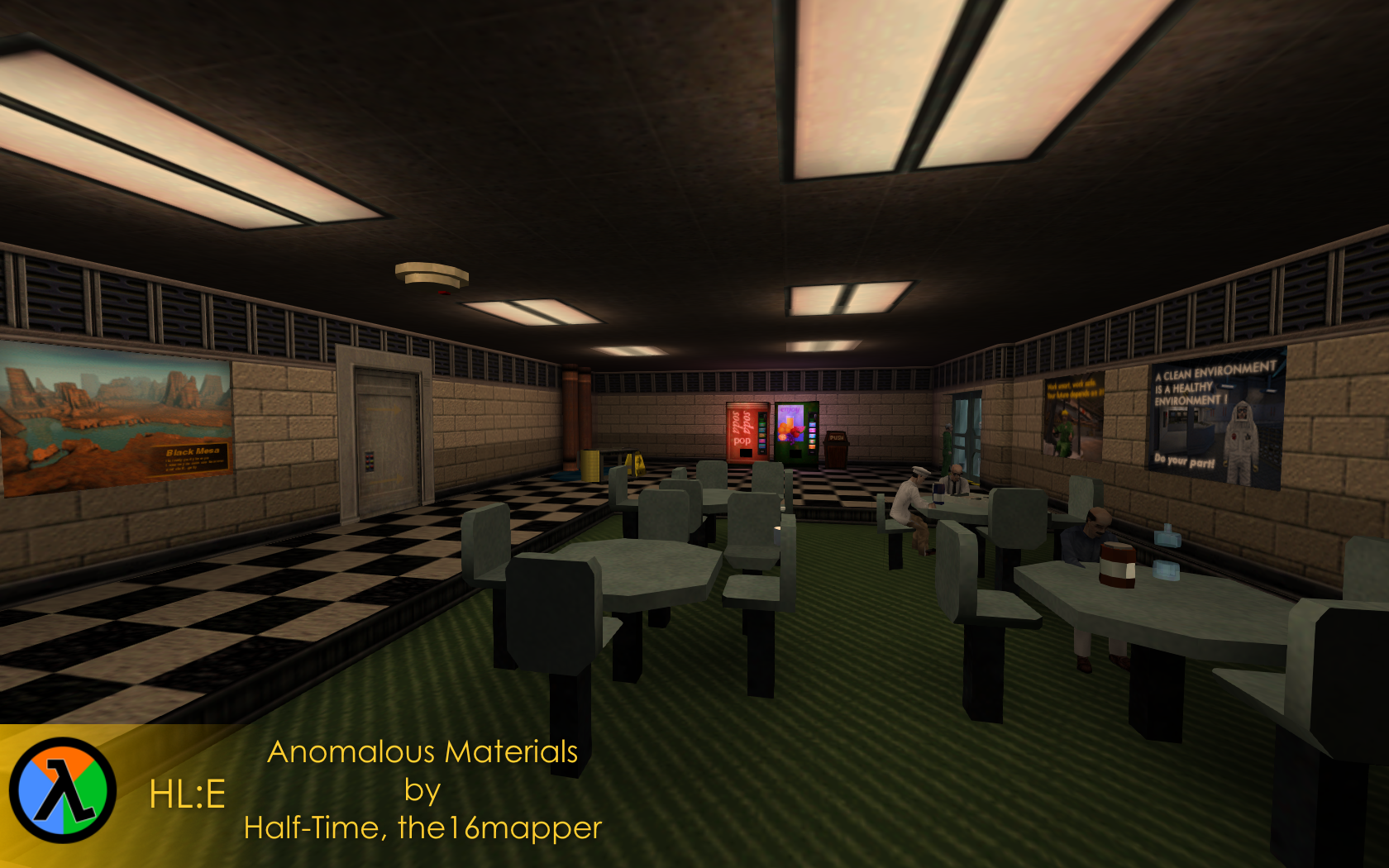 Finally, entire new sections were added to the campaign. These are mandatory to go through, our mappers are trying their best. WGH mapper was so eager to work that at some point he even messed up his sleep schedule, now that's dedication (he's fine now though, we told him to not do that again). HL:E will also have greatly reimagined Xen, but it's a secret! All in all, everything mappers do deserves appreciation and in combination with the next thing we'll tell you about HL:E sometimes feels like an almost entirely new thing, not just improved HL. 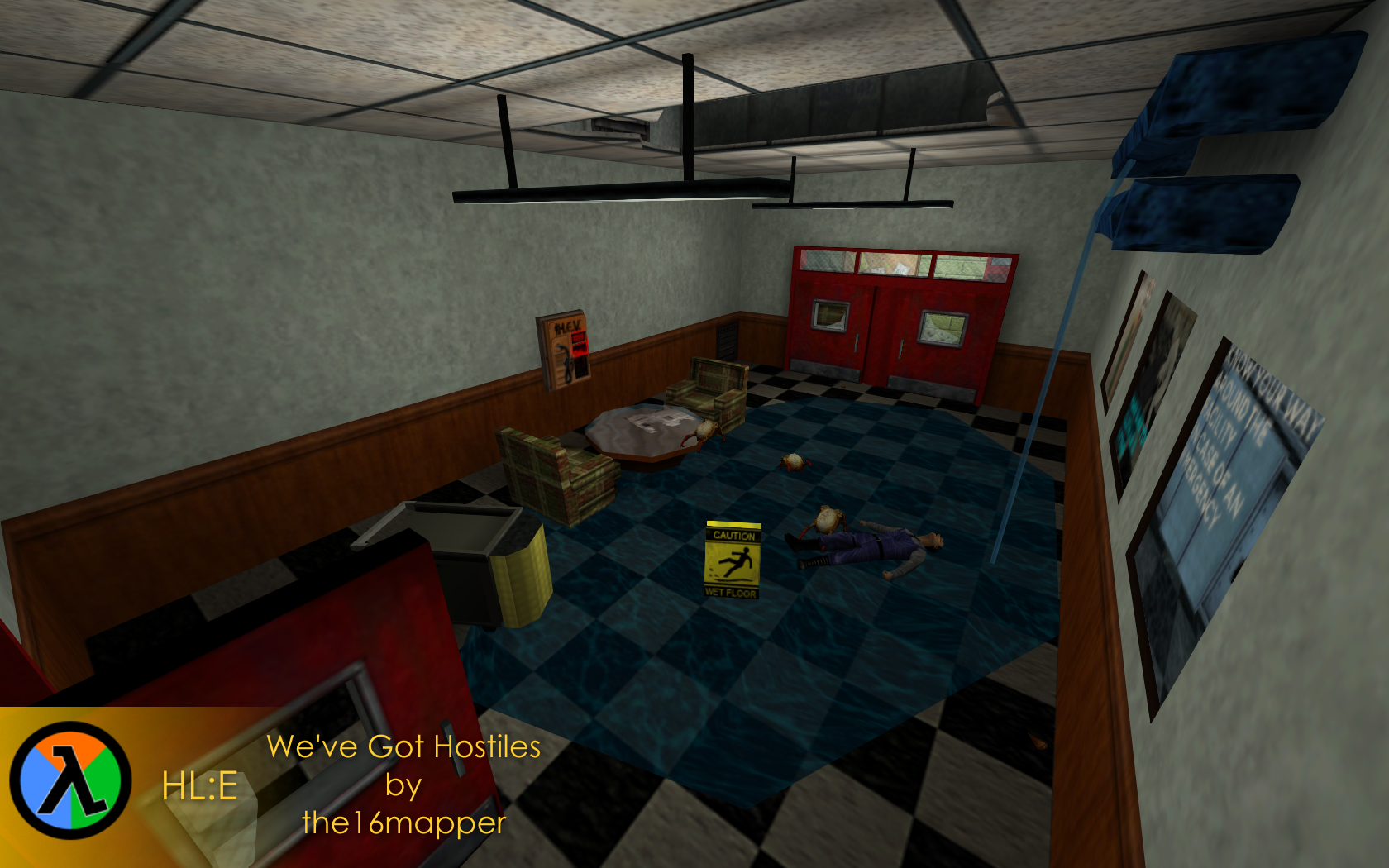 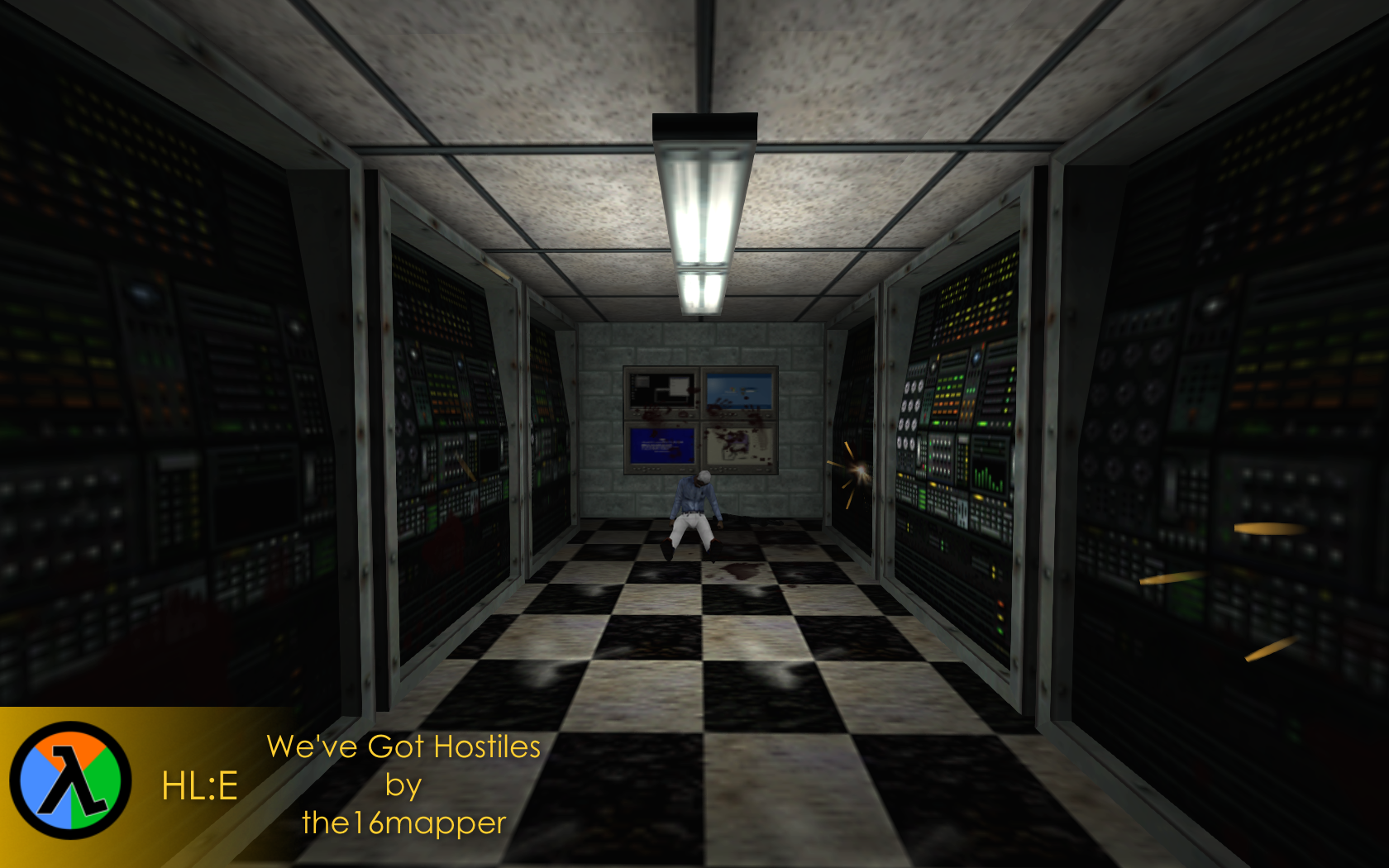 Oh yes, have you ever felt that it's strange Black Mesa has all these maintenance areas all over the place but there aren't any maintenance workers? HL:E got you covered!

Have you ever wandered who cooks the food and uses those meat supplies from the Office Complex fridge?
HL:E got you covered!

Have you ever noticed that you take all these RPGs, sniper rifles and other weapons from HECU but no grunt is actually seen carrying them? Guess what, HL:E got you covered!

But we weren't only filling in the gaps, there're also a plenty of additions we made
on our own. For example, both Barney and Otis can carry a Glock, a Deagle or a revolver. Barney can even wear a HEV suit! 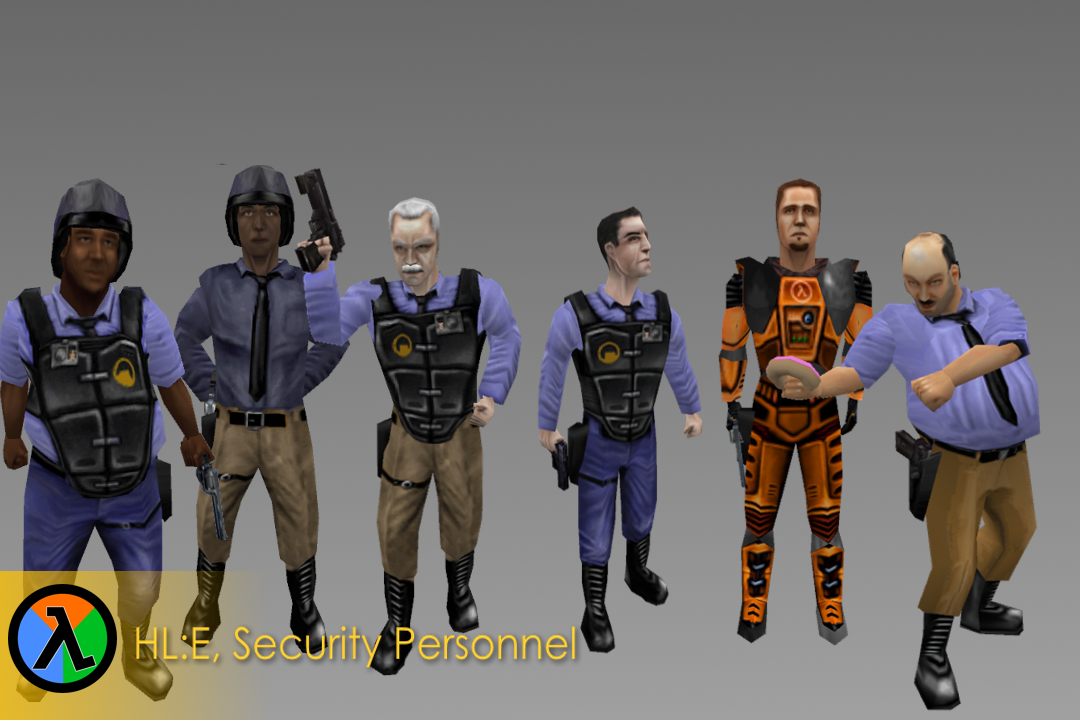 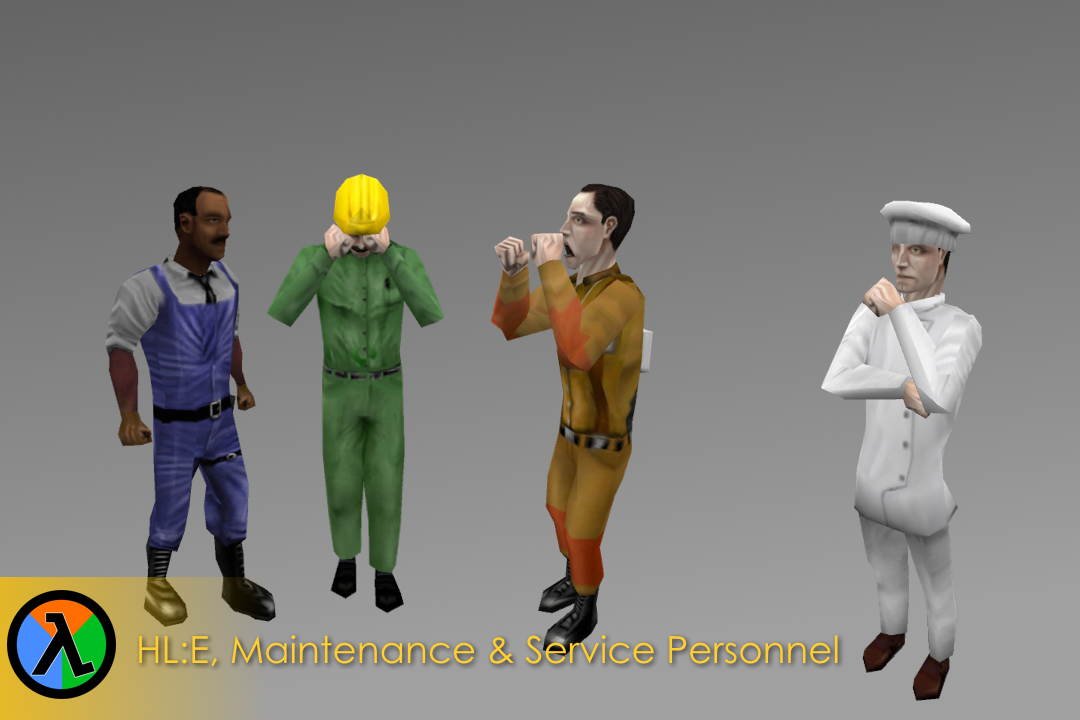 That's not all, folks! Have I told you that we also added good old chumtoad? Yes, it's already entirely functional. It hops around, croaks, distracts enemies and you can throw it to bait monsters. We're planning on adding a few more weapons, but for now that's it. 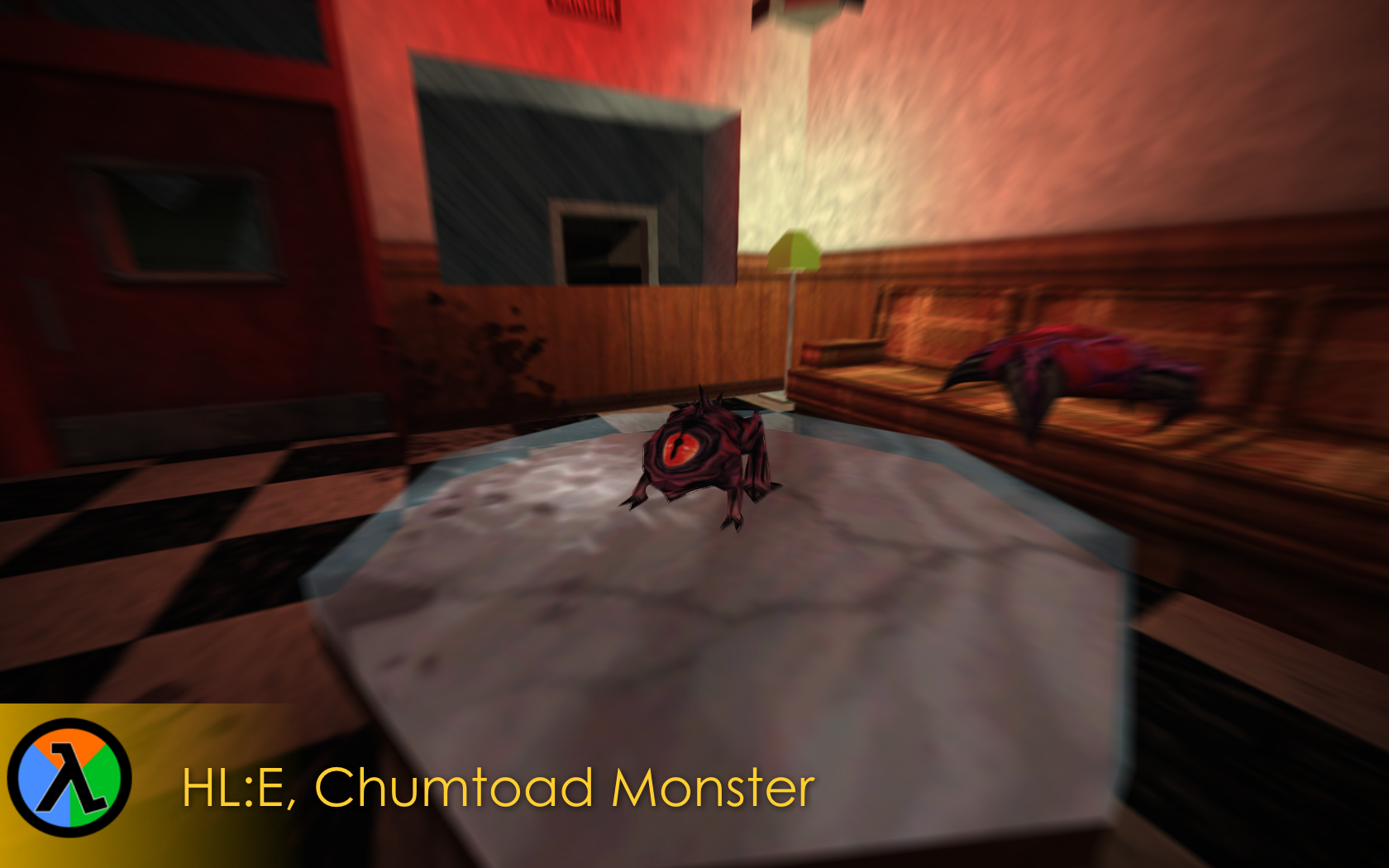 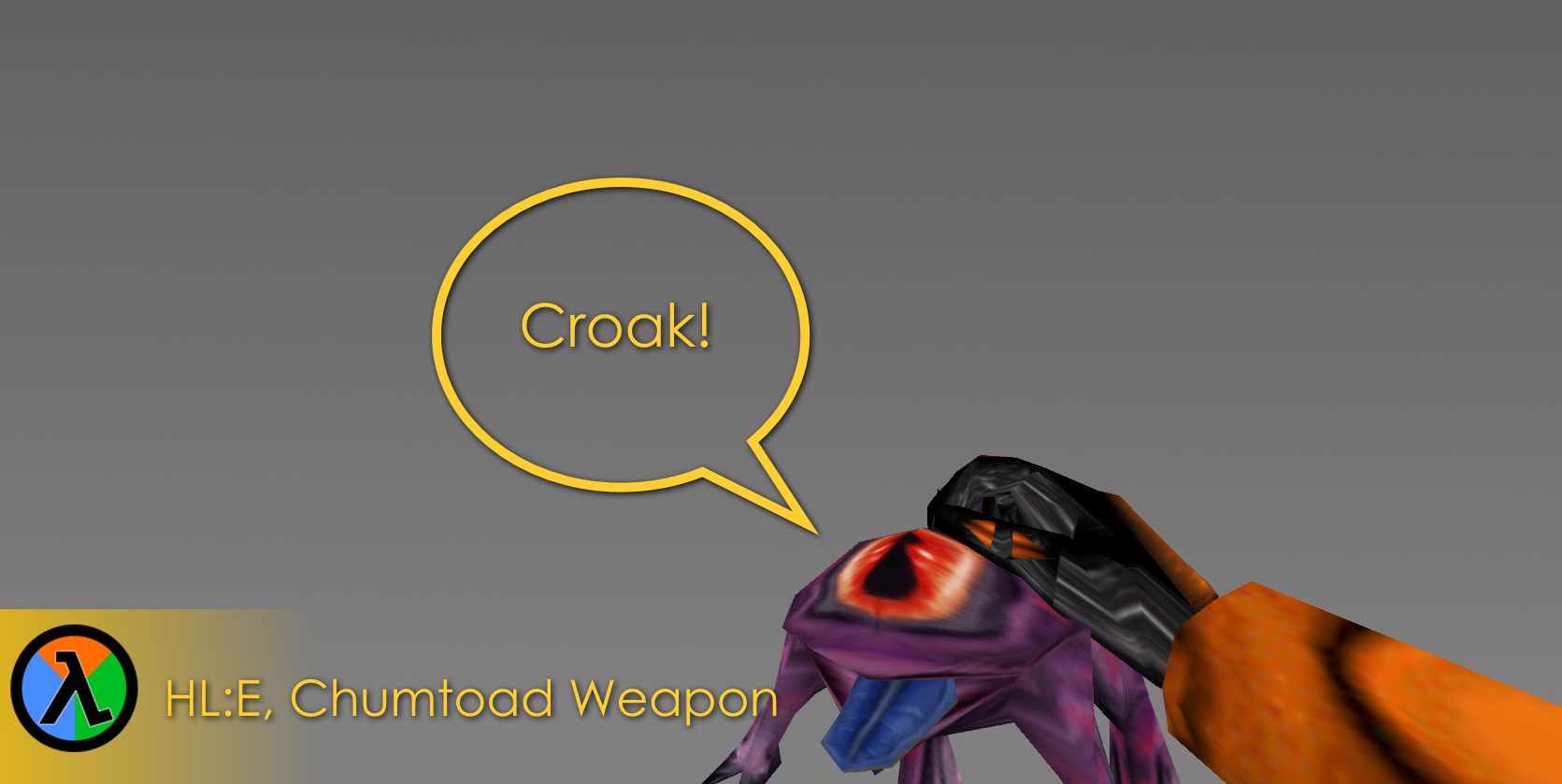 Of course we will release the SDK that will contain the source code, the models, the FGD and everything else for making your own mods on HL:E base somewhere in the near future. As of now, the coding and modelling parts of the mod are almost entirely functional and need just
a little polish, so expect the SDK somewhere in autumn, shortly after the Extended©®™ Half-Life campaign will be released and we may start on Extending©®™ the expansions. We'll see how it turns out.

So, that's finally it.

Fantastic. I've been waiting for something like this. I might even start up my abandoned Firestorm Project with that mod of yours. Will you also add few of the Spirit features such as fog, model swapping and entities following and teleporting to other entities for instance to simulate a fire being attached to an Osprey. That'll be amazing.

Did you re-add the Op4 ropes and electrical wires that Solokiller reverse engineered? Github.com

Either way that project of yours sounds very ambitious and it's even better seeing how you're already running internal beta tests. Count me officially amazed.

I can only agree with DarkShift Half-Life for all eternity. Tracking your mod.

By the way. Have you seen these: Moddb.com Might be interesting to incorporate them and possibly the Azure Sheep female Security Guards as well.

Thank you for your feedback. Lengthy comments are my favourite!
1) SoHL features most likely will have to be added by somebody else since I am the only coder and there would be so, just so many things to carry over...
2) Yes, ropes and wires are in the game.
3) We were also thinking about adding female scientists, but there just might be not enough space in sentences.txt considering that maintenance and service personnel will also have some custom lines.

Sounds wonderful. As for maintenance voices. Why not just use the scientist voices? Just leave some lines of the more pronounced scientific talk disabled for them. That would give you additional space for other voices.

But I most certainly understand that dire situation. I never truly reached the limit in my mods despite having countless custom lines in it as well. I believe 1024 lines were the maximum? Not sure anymore. As for Spirit I think the only usable unique features of it were the ones I mentioned but I totally understand that it's a time consuming prospect. The only solution I could think of right now would be to run with 2 separate sentences.txt files aka mod versions. 1 File primarily for that SP Campaign enhancement of yours and 1 for modders where most VOX messages are commented out allowing mappers to choose what they would want enabled/disabled in their mod projects as they go.

Anyway I'm certain that your mod will rule no matter what. So go for it and I'm looking forward to that very special release day. :)

Looks very great! Wish you all the best luck on this.

I wish all the luck for this project. Looks amazing!

Will there also be different zombies? Sorta like this Images.gamebanana.com

Not exactly that but we do have about 14 different zombie variations and 3 gonome variations.
We're also implementing HEV zombie at the moment.

Nice!!! I hope this project success, it looks so cool!

This looks excellent. I very much look forward to playing through it!

oh heavens no, what is wallder bended doing with the buttoned up coat

Im looking foward to this.
BTW will you use some thins from this: Steamcommunity.com

Everything I saw there is already implemented in one way or another.

Please keep it up. This is a wonderfull project.

I know its not a goal of the mod but, these additions will make the vr version of half life even more awesome, porting it to my oculus the day its released! :)

Yes I think this will be very nice

An interesting mod! I believe that switching/porting to latest Xash3D Engine will allow you to bypass restrictions on number of entities on HL1 maps (what will help in combining maps without any issues), what do you think about this idea?

do i see an accurate RPG worldmodel?
I'm going to poop myself


but in a good way