Hey there, everyone. Today’s the big day – we’re shipping Division 1.2, the definitive release of RTBR! We’ve got so much we could talk about but we think it’s better you try it out for yourself. Nonetheless, we’re going to describe in a changelog here what happened across the board, summing up our updates over the last few months and describing other details we may not have gone into full detail on yet. When you play Division 1.2, if you’ve already left a review on previous releases of the mod, we implore you to take a look at your review and adjust it in light of the new release if issues you had with the mod were resolved. 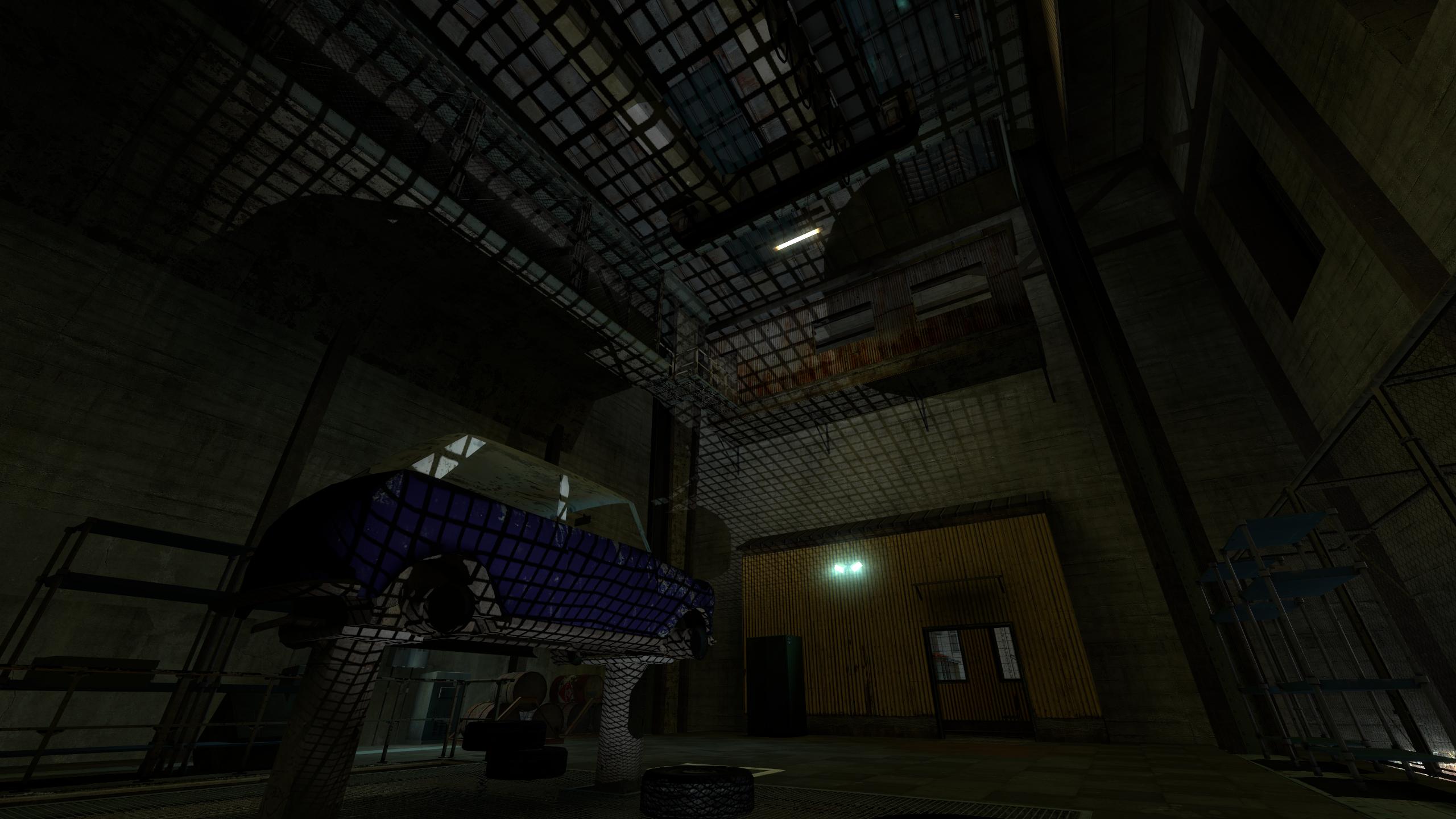 First off, as we announced some time ago, we’ve migrated to the Mapbase branch of the Source Engine! This added huge amounts of tools for us to work with, from visual elements like projected textures and shader fixes, to improved logic entities to make use of in Hammer, to many back-end fixes and improvements to things like AI and long-standing bugs in Source. Mapbase has allowed us to really push our vision even further without having to sit down and make these engine modifications ourselves. Not only would we highly recommend you take a look at Mapbase, we’d suggest you use it for your own mods – it’s a vastly powerful set of tools that are a flat improvement over default Source. You can check out Mapbase here: Moddb.com 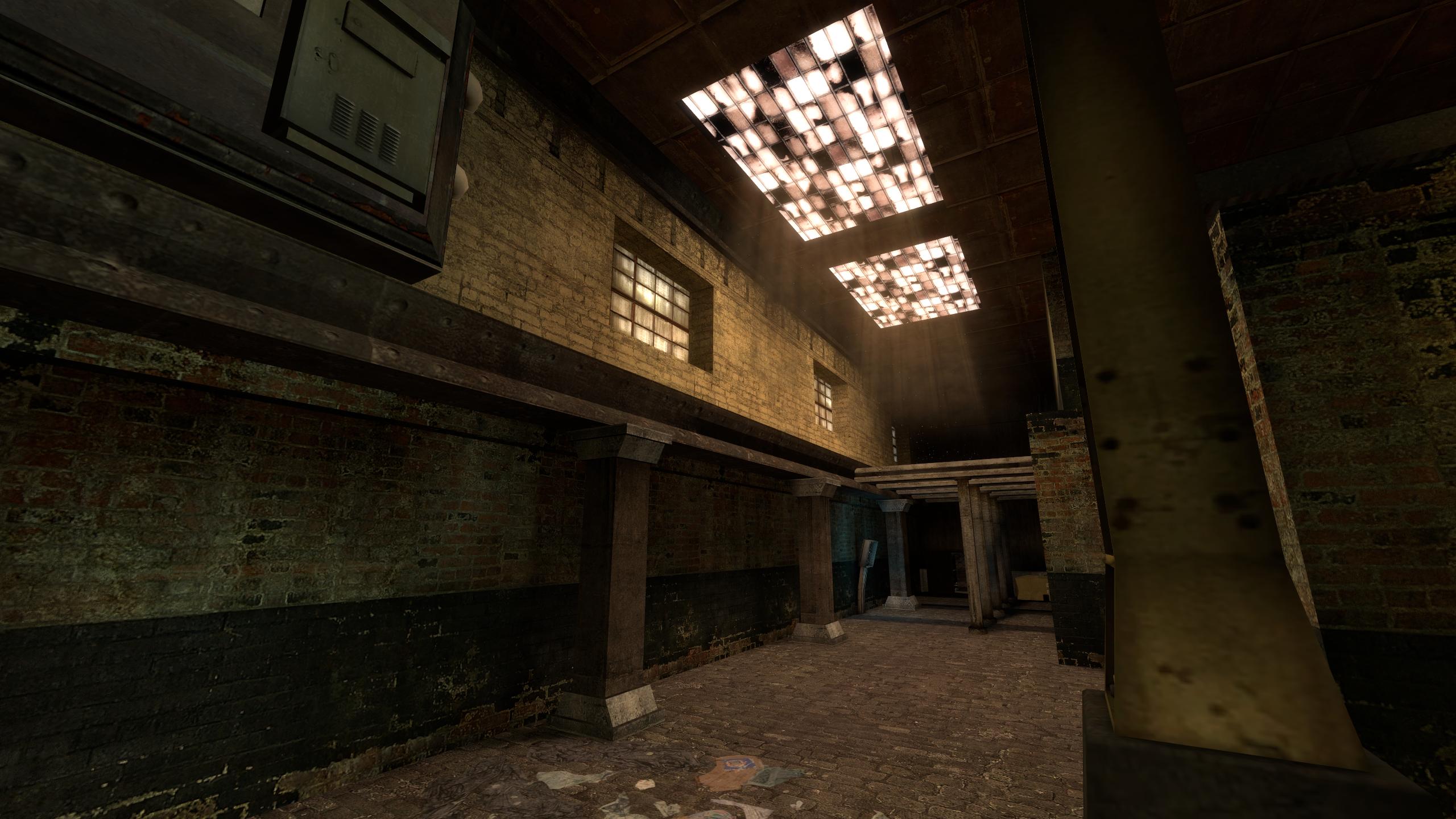 One of the key parts of Division 1.2 is the vast overhaul of maps and gameplay that has taken place. Visually we’ve pushed the aesthetics up considerably across the board – all maps receiving huge lighting improvements, much more map geometry, extra map props, and more. Gameplay in both combat and non-combat maps was also improved, with some maps receiving changes like extra telegraphing, and other maps – like Consulplaza01 and 02 – receiving total gameplay reworks to make them function better. In all maps, fog and our new Citadel model were implemented with much iteration to make both fit in and boost the visual quality further. A quick (and deliberately vague) sum-up of changes to all maps is as follows:

Industrial: Improved choreography and vast improvements to major vistas, as well as to underground areas and interiors

Lab01: Visual overhaul of the basement area as well as re-voiced Kleiner and improved visuals in Kleiner’s lab

Lab02: Total overhaul of the teleportation sequence with new particle effects and big visual improvements in all teleportation locations

Construction01: Big improvements to interior areas in addition to gameplay rebalancing and notable touch-ups to exteriors and rooftops

Construction02: Overhaul of the map visually from the crane with all rooftops receiving much improved detail, and gameplay was tweaked to give better balancing, in addition to interior areas receiving visual upgrades

Consulplaza01: Additional sequences, gameplay overhauls regarding progression and combat with the helicopter, and much improved visuals in interiors with many improvements in the exteriors

Consulplaza02: Total gameplay and progression rework in the courtyard area and outside the arcade, big visual improvements to the interiors and lots of optimisation in exterior areas

Underground: Many visual improvements throughout and changes to logic to make the map sound better with stronger ambience

As you can see, even very vaguely, every single map received lots of attention to bring them all up to par. We covered the most common complaints and also brought up the visual standard across the board. 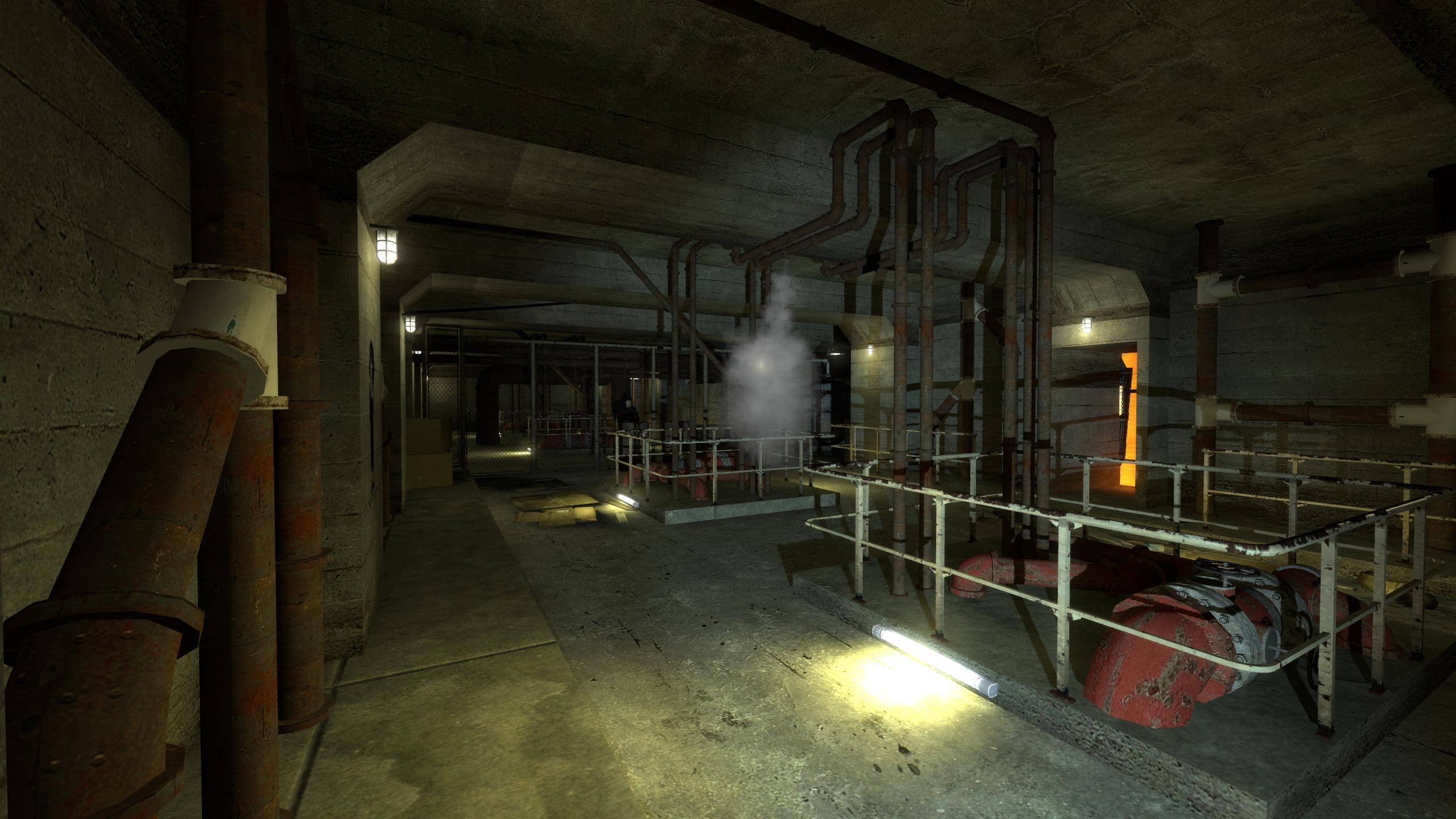 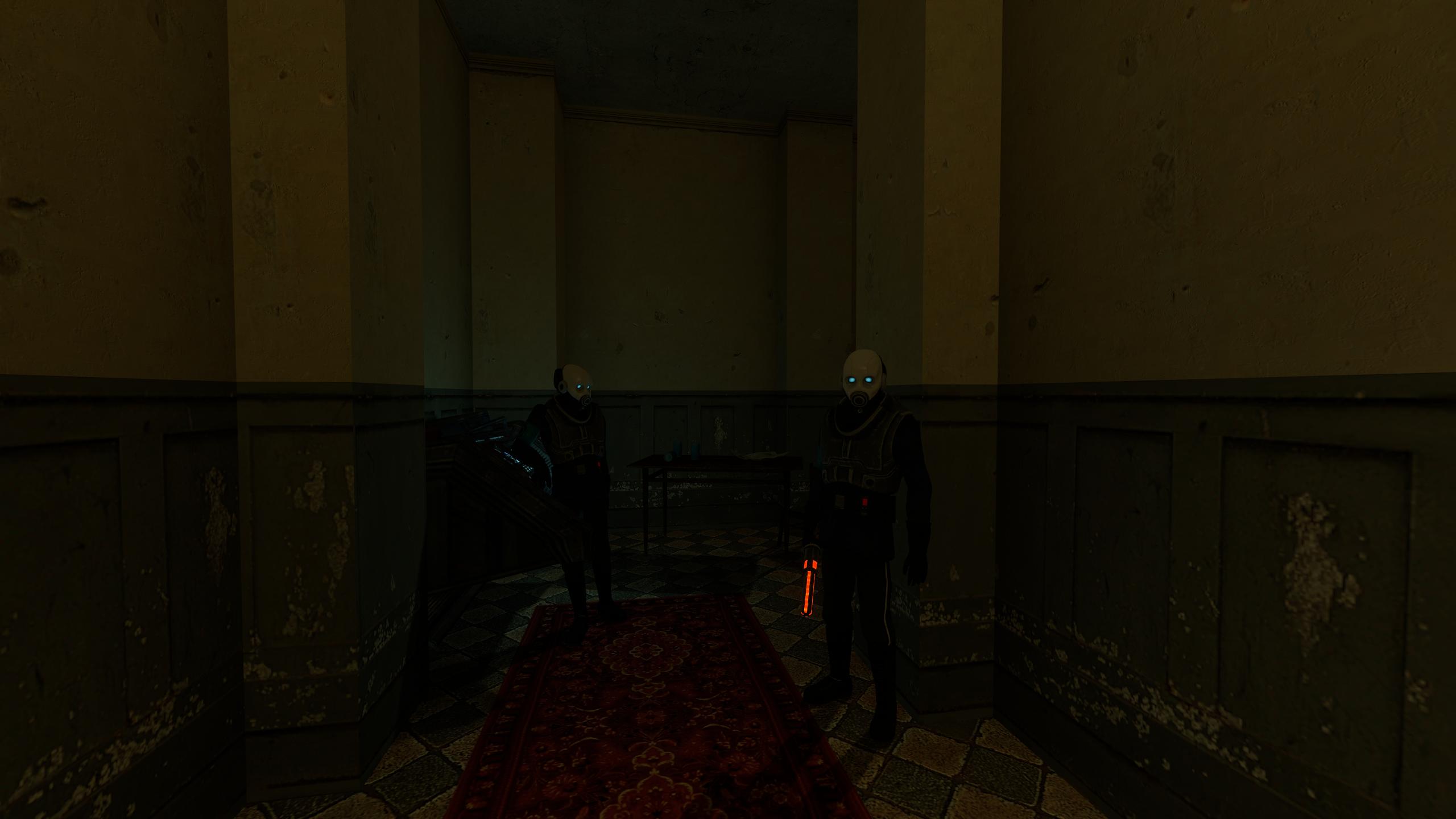 A pair of cops passing the time with some chatter

One big complaint with Division One was the world didn’t feel alive – not enough scripted sequences, conversations, and optional narrative segments to make the world feel moving and breathing. As a result, all of the pre-combat maps received new sequences and refinements to existing sequences, and even combat maps received more detail in the world-building and narrative sequences, like Consulplaza01 and Arcade, to make these areas and regions feel more alive. Freeman’s war path to escape City 17 isn’t without casualties or observers, now. Of course, our extended G-Man sequence, combined with totally new speech sequences and choreography from our Consul voice actor, also help sell RTBR better as its own foray into the universe. 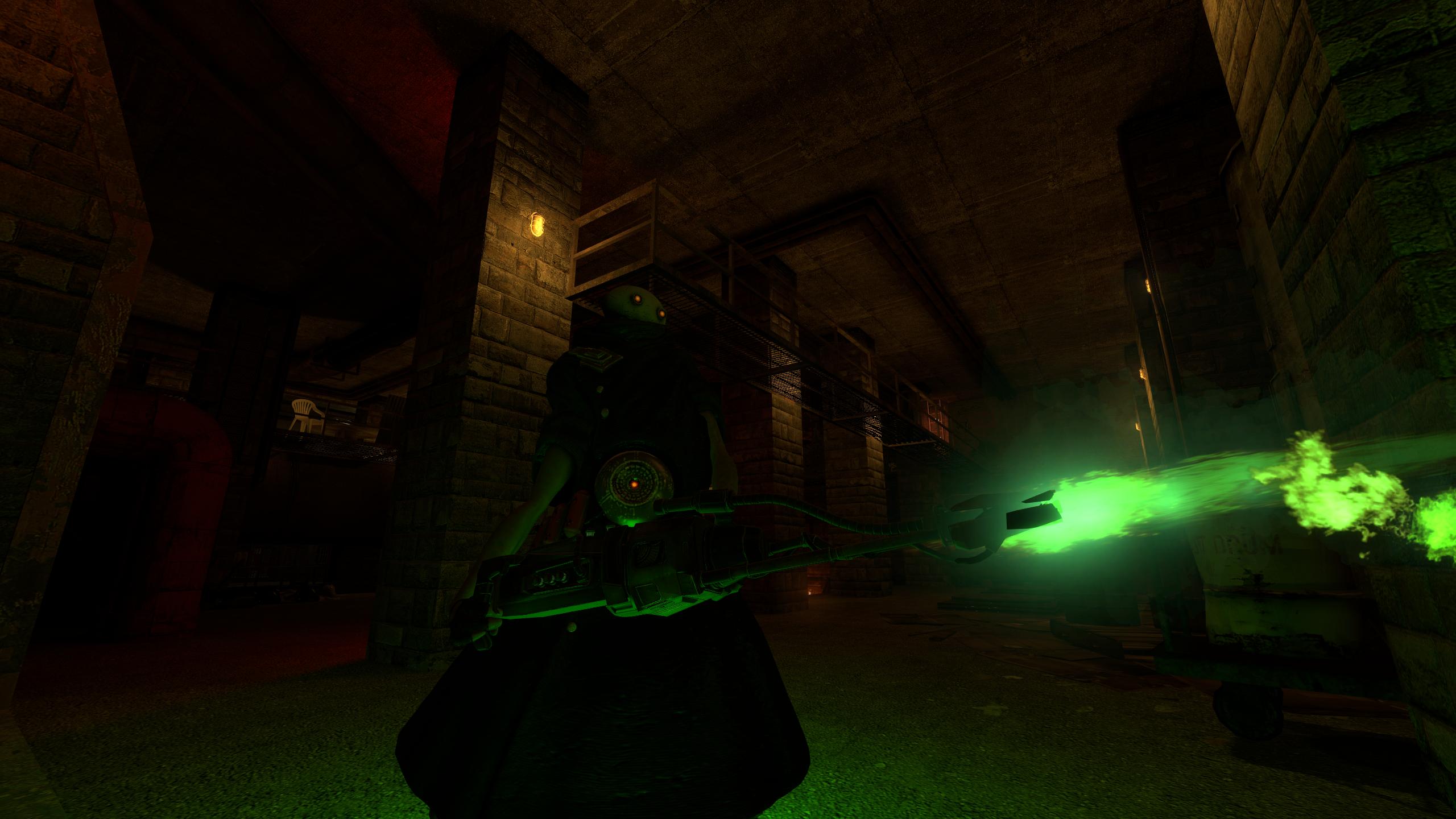 Whilst many ideas we wanted to handle with programming were handled by Mapbase, we also made a great many changes ourselves. Iridium77 graduated from level designer to programmer in making huge overhauls to our cremator AI. Whilst still requiring some additional work, it’s a considerably more interesting NPC now. In addition, many new features like unique muzzle flashes, particle effects, and more that required code implementation have been possible thanks to Iridium’s work. 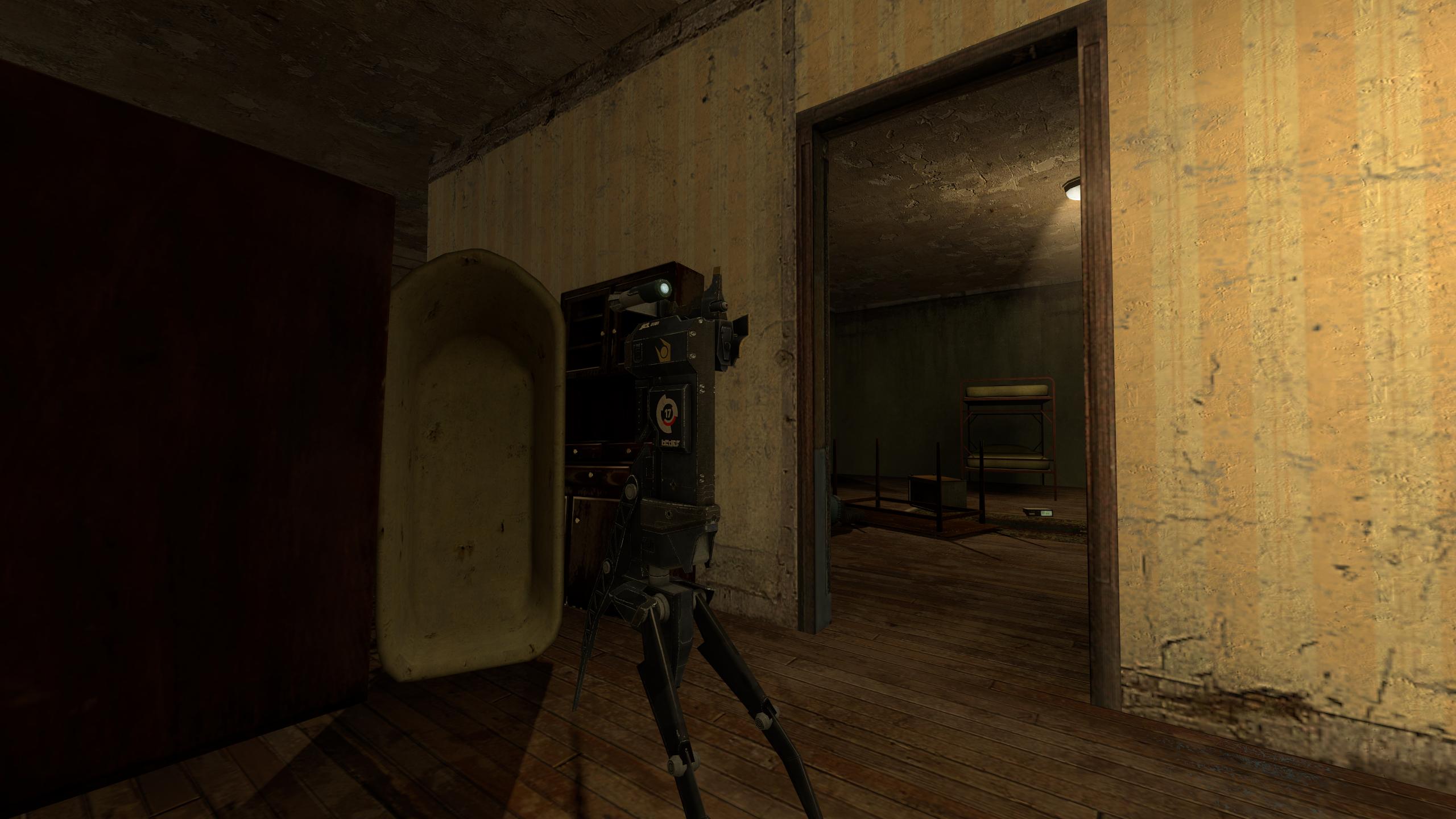 Of course, we’ve shown much more of our new models in the run-up to this release. There’s all the big ones we’ve noted – like, for example, the metrocops and helicopter – but even since the last twitter post we’ve been sorting out loose ends. Whilst we’re not on total asset parity just yet, 1.2 is significantly closer to our end goal of a full visual style overhaul from HL2, and Division 2 will be more going forwards.

However, new models are not the only change we’ve made here. Thanks to Iridium again, we’ve programmed in first-time pickup animations in addition to idle animations. This gives the arsenal a lot more personality – far more than before, animations have flair and make the arsenal stand-out more on its own. 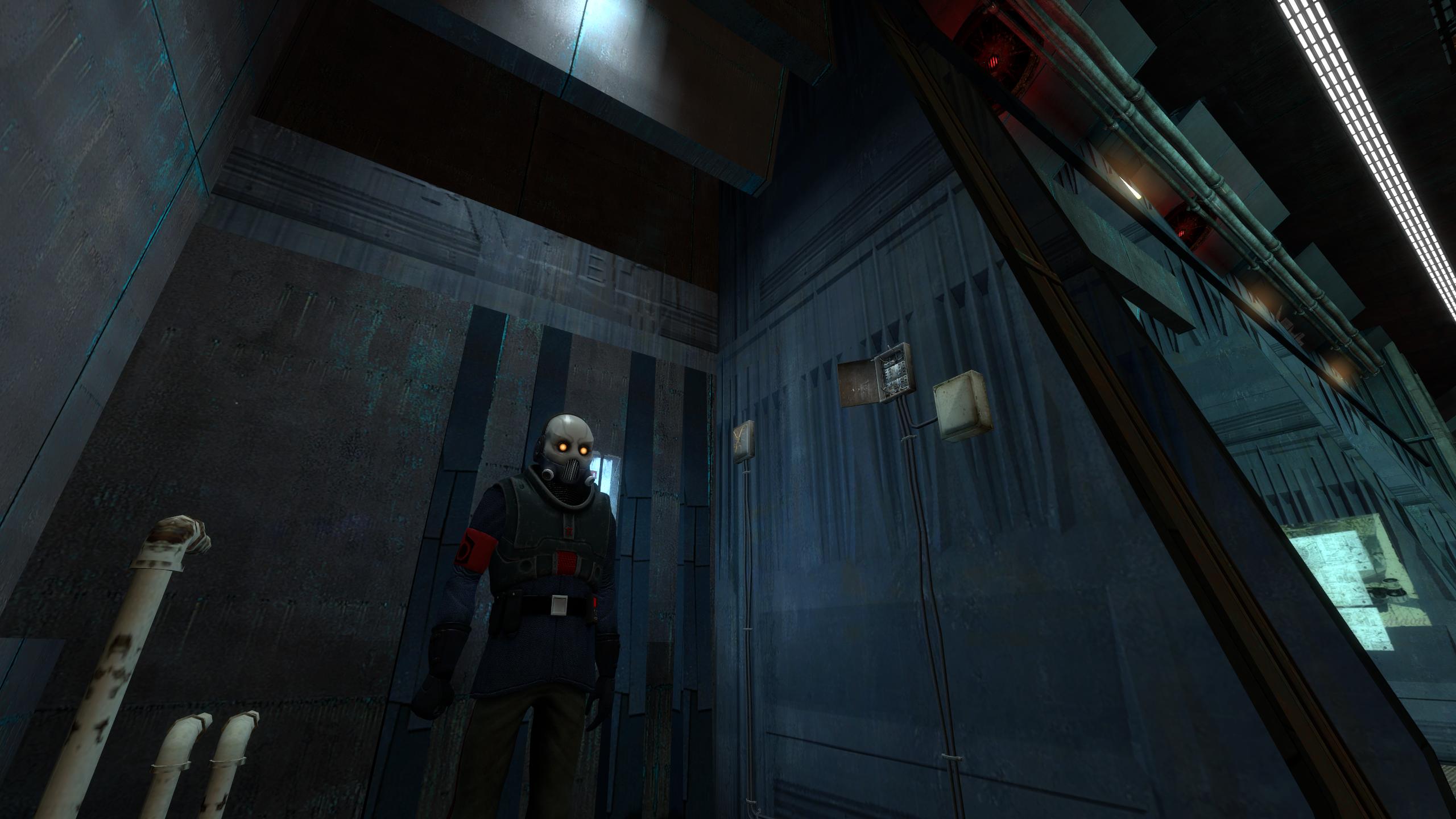 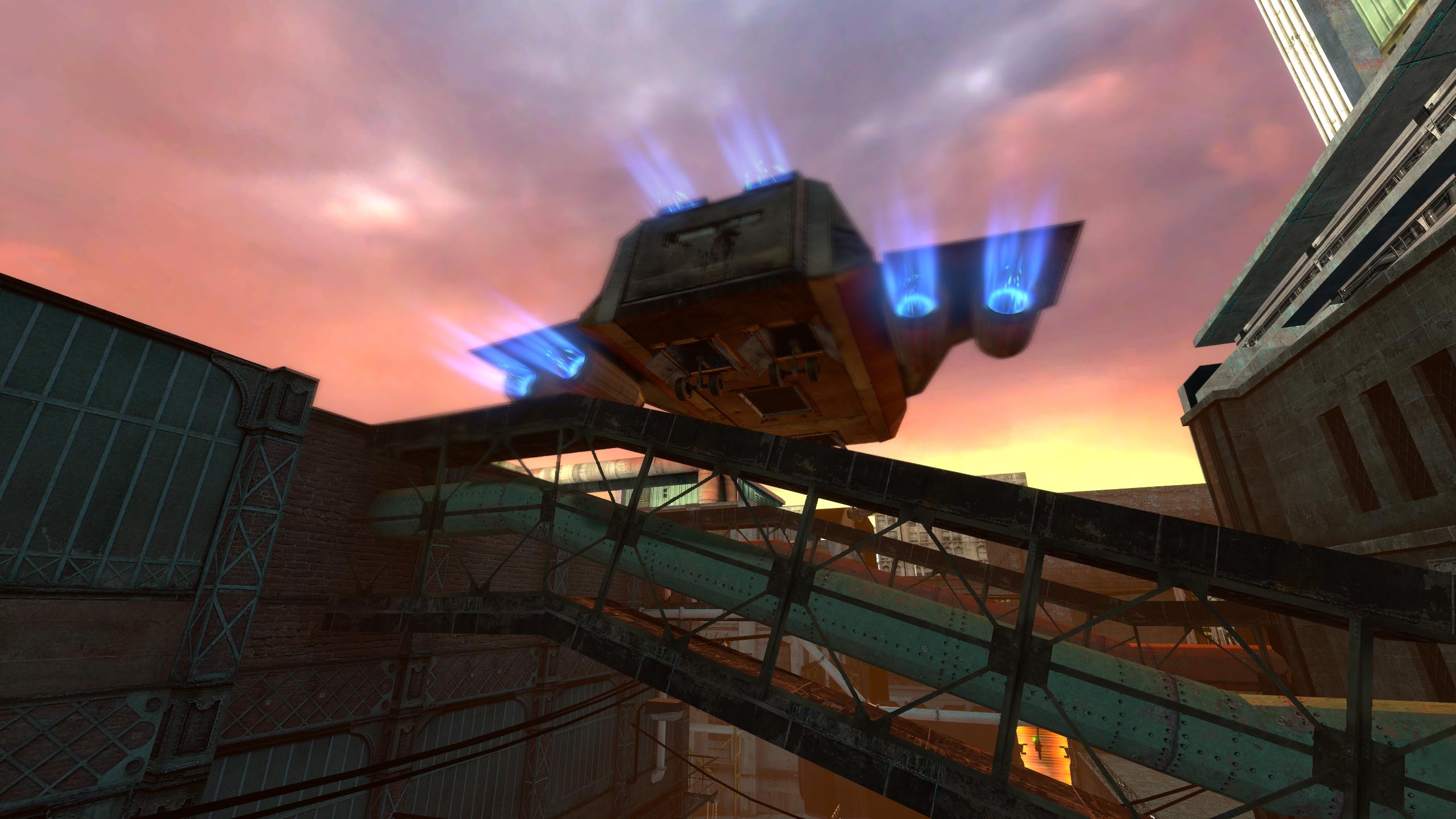 Thanks to our new particle artist Randomcatdude and our previous particle artist Omi, we’ve got massively revised particle effects across the entire Division. Muzzle flashes, tracers, teleporter effects, and environment ambient particle effects have all been created with loving attention to detail to further inform our visual style, and make our maps and models stand-out even better. 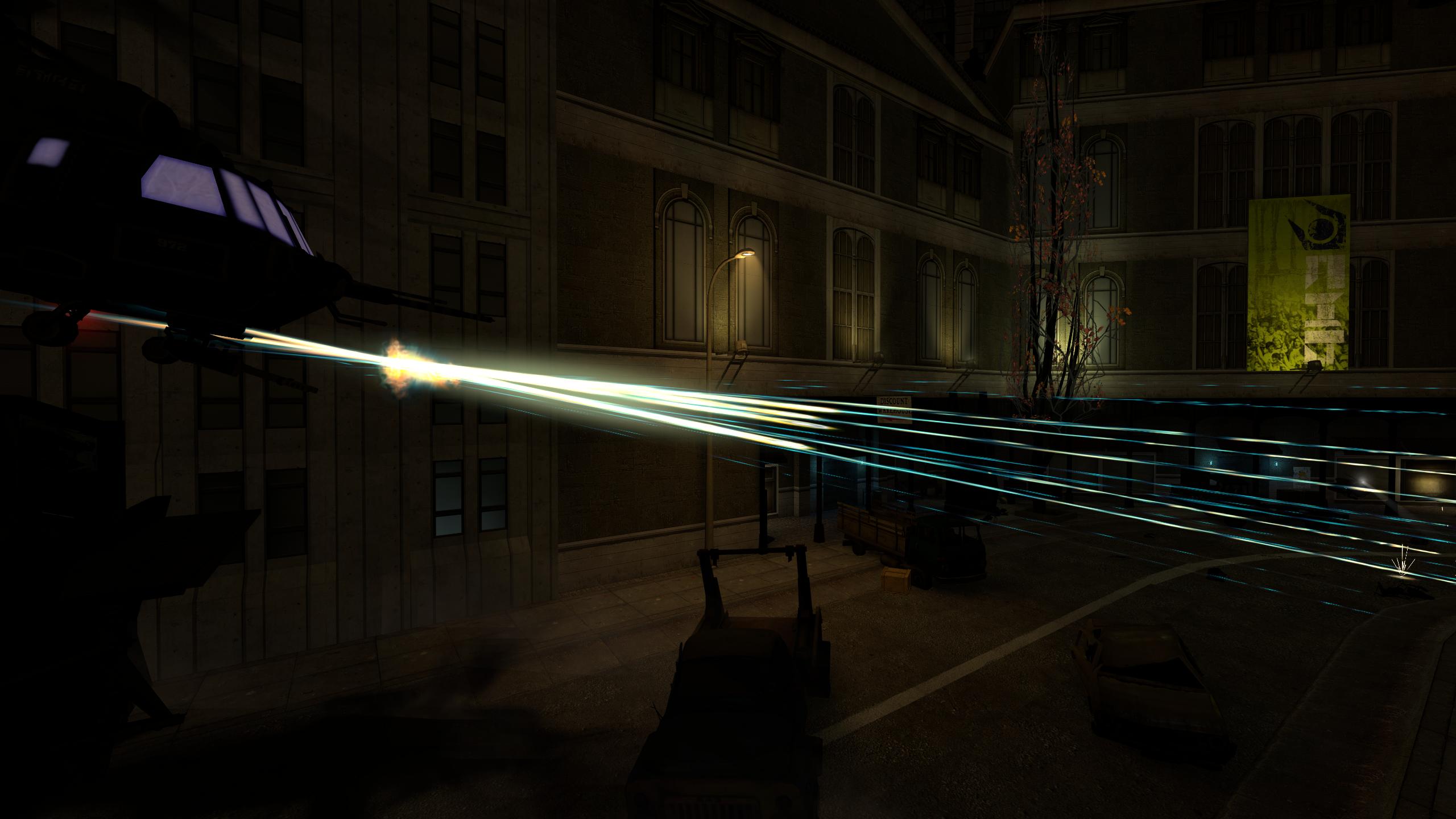 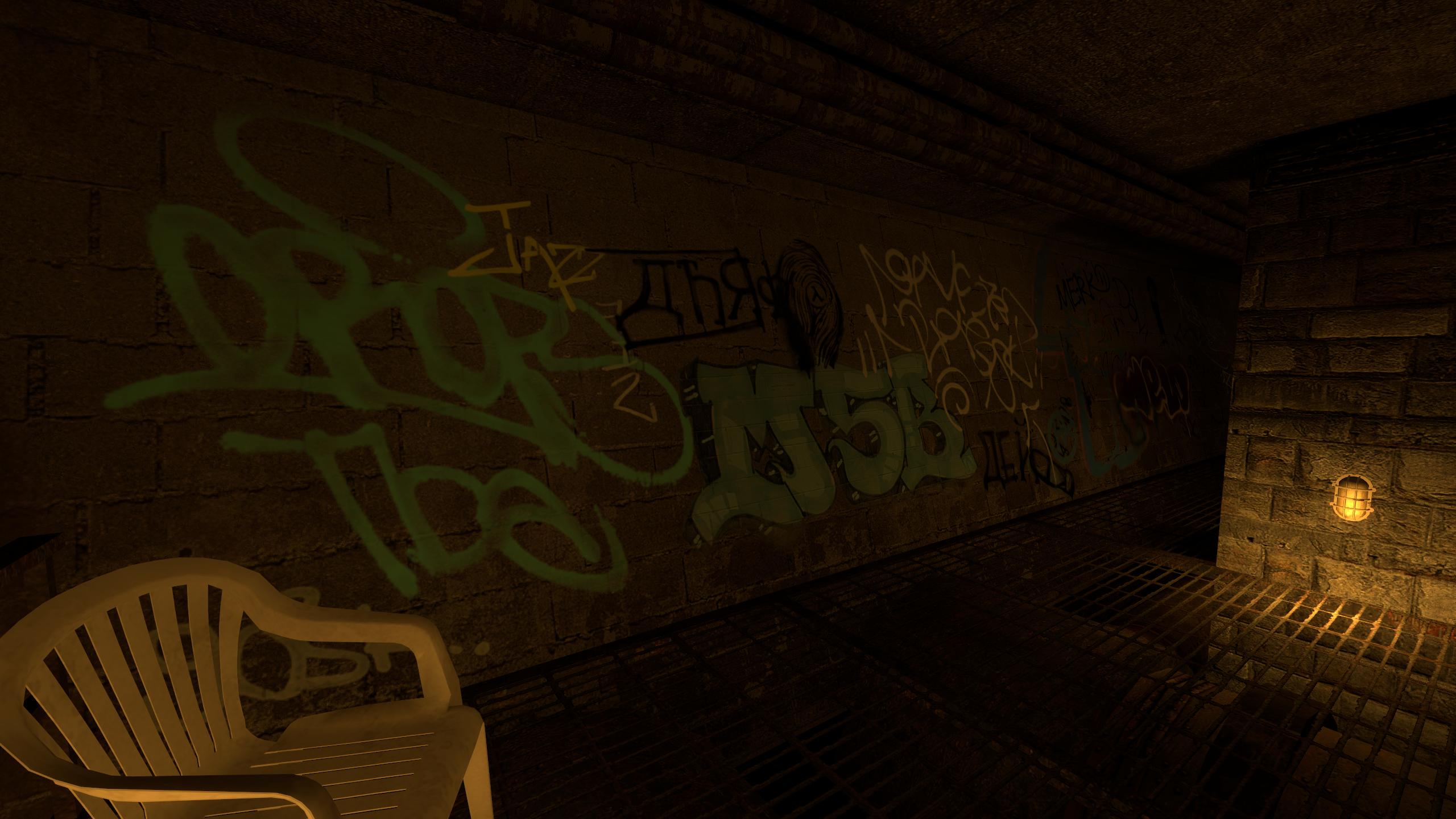 As we showed in our previous big article, we’ve made many new graphical assets to make the environment pop and be more unique. New propaganda posters, graffiti, signage and more are all implemented to make the world more personal to us and to RTBR. 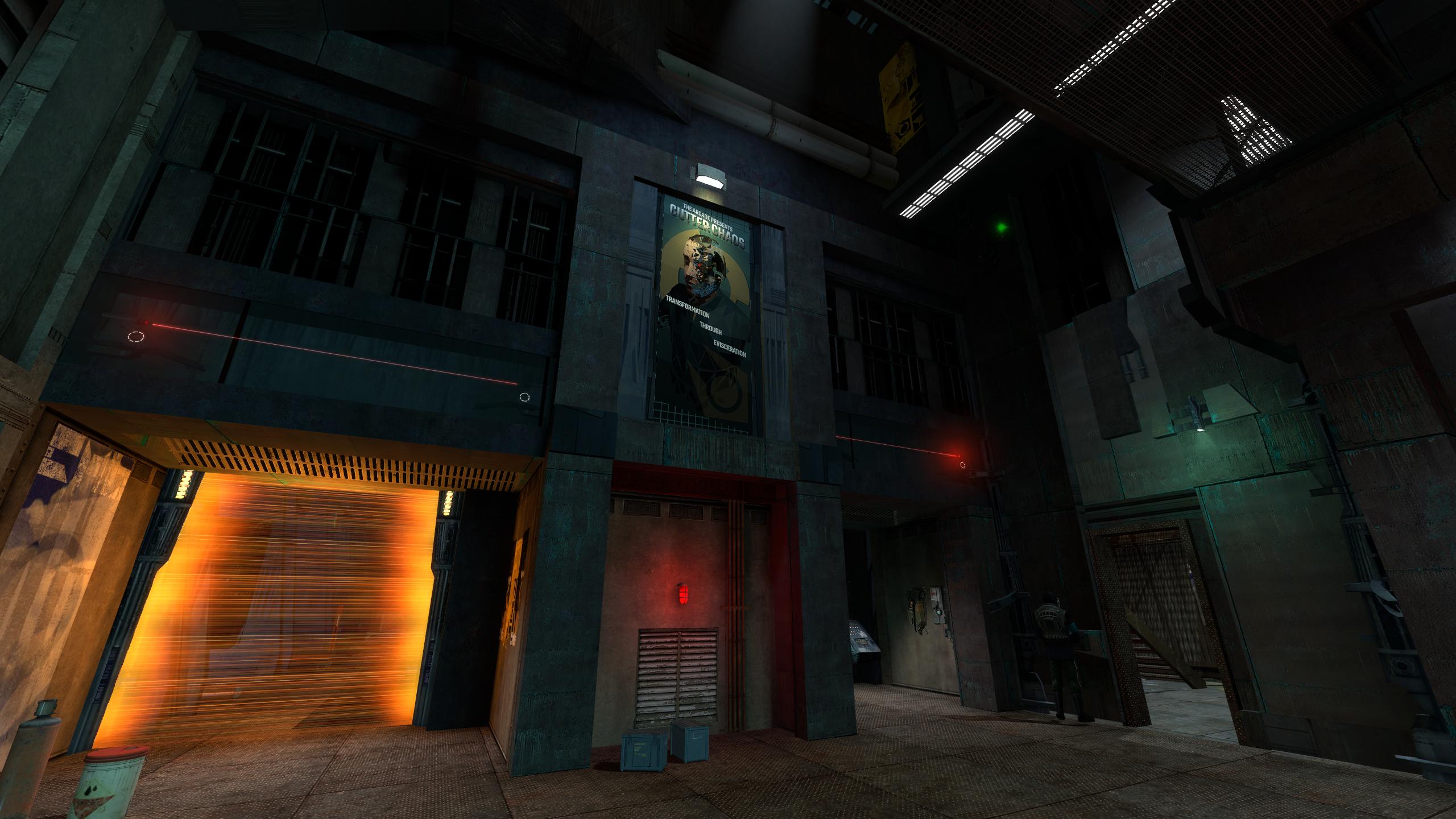 Posters in the Manhack Arcade 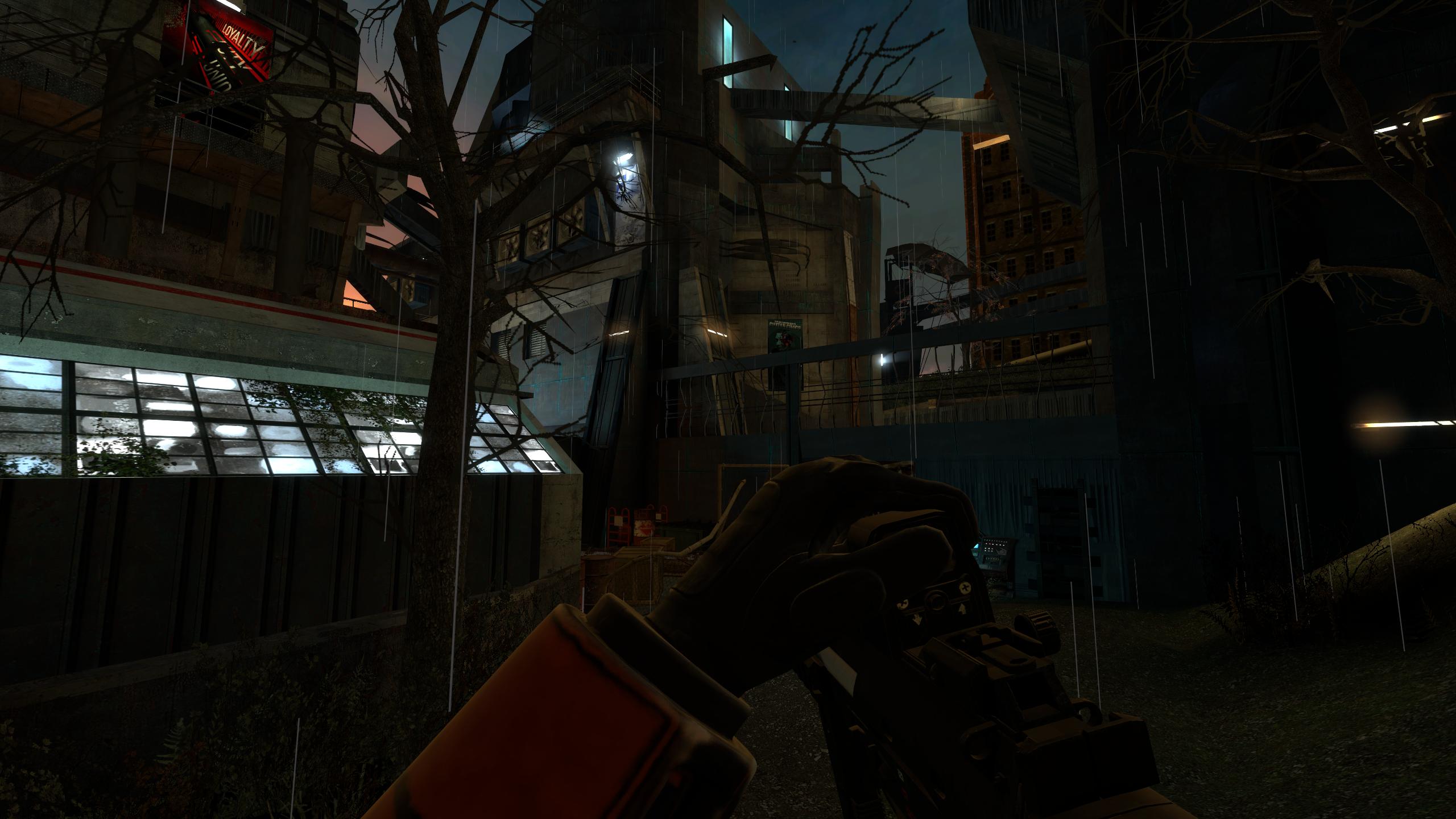 New sound effects for our idles and first-time pickups are a given; however, new sound effects for entities like the chopper, anti-chopper gun, and cremator have all been created. Not only that, but new voice acting for minor characters and major characters – like the consul and Kleiner – have been recorded. Most impressive, we think, is a total re-recording of all Metrocop lines twice – once for normal metrocops, once for elite metrocops. With both we took strong influence from vocoders present in the cut content files, and both have unique vocoders to help them stand out in gameplay and help their roles be more distinct. 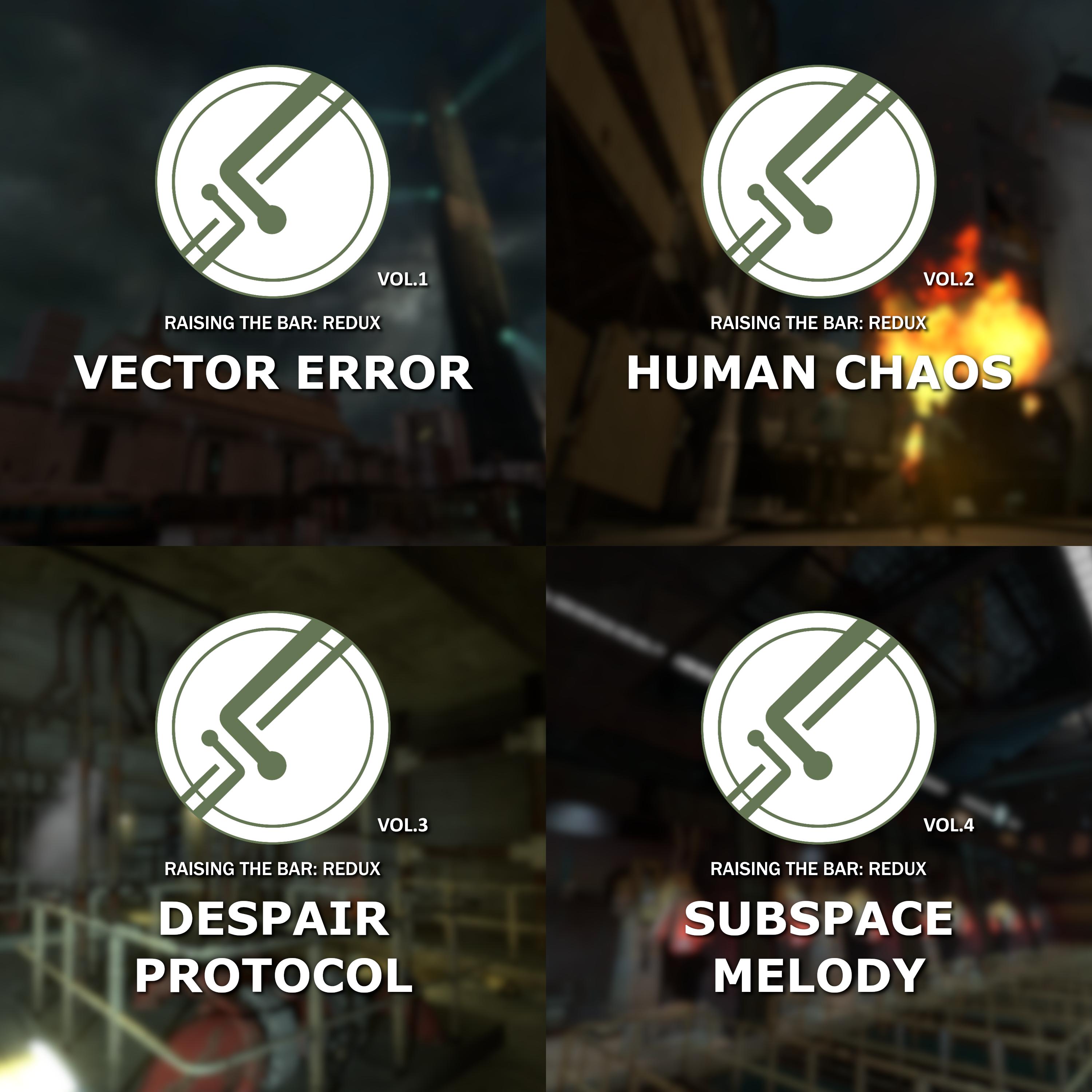 Lastly, with Entity, CW3D, and our new composer Name, we’ve produced thirty more music tracks to be utilised in future Divisions but also within Division 1.2. You can check out the extra tracks over on our Soundcloud albums: 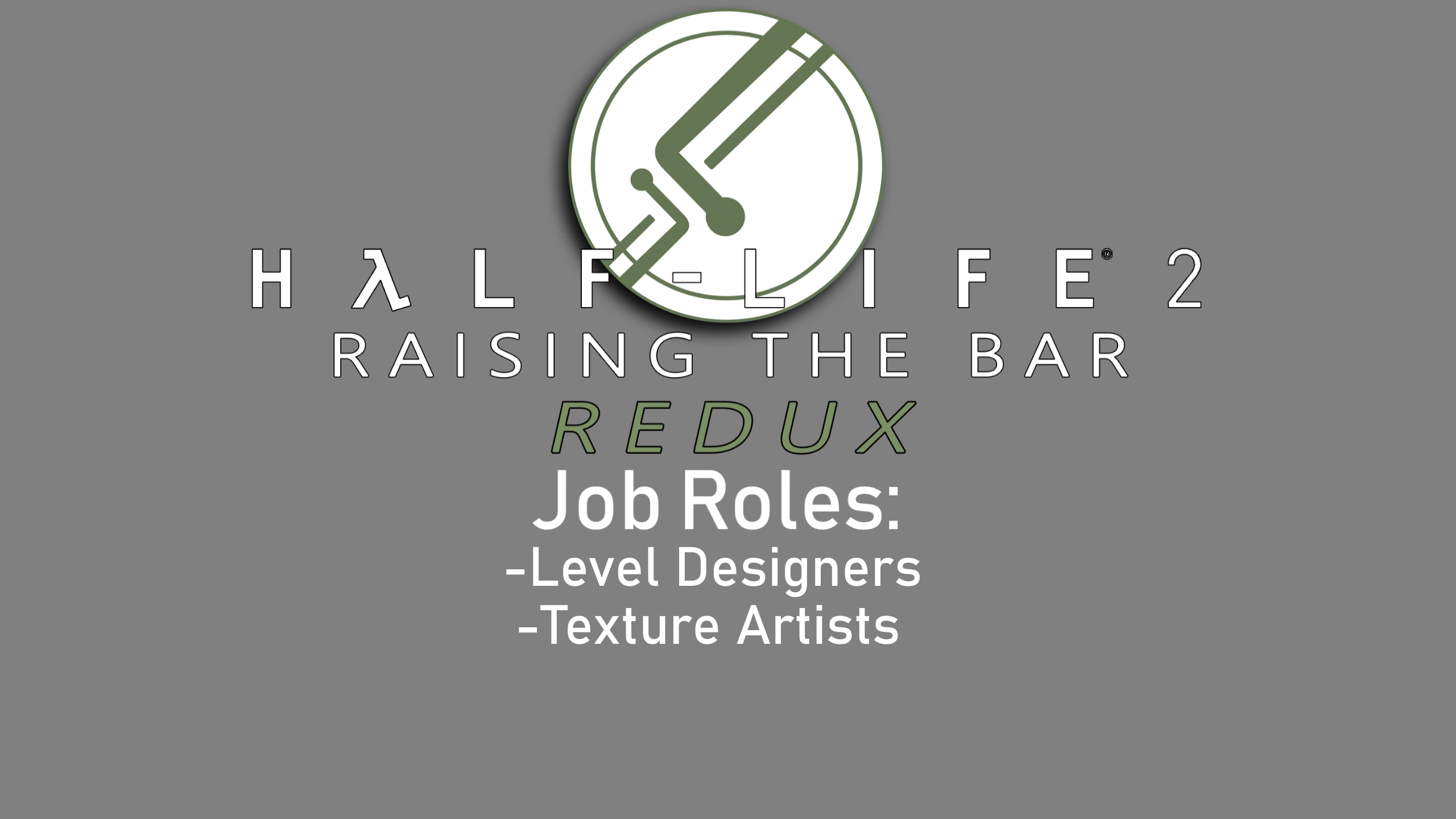 Thanks, everyone, for sticking with us to here. We know it’s been a long time coming shipping this big update, and we’ve made tremendous overhauls that we think make this the definitive version of the mod. We’re going to be pushing forwards now on Division Two and beyond – learning from our improved workflow and from what we’ve done before to make future releases much stronger right out the gate. Before ending off, there’s a few roles we could use to supplement the team going forwards:

Texture Artists: General purpose graphics designers/texture artists with experience creating decals, signage, or making new textures for models would be very helpful. You don’t necessarily need to know how to model, but this would be a plus.

If these roles interest you, please add me on Discord at Kralich#0901. Thanks everyone! Enjoy this updated release and stick around – we’re going full-steam ahead on Division Two and beyond!

Hi just wanted to reach out that I'm absolutely astonished with the changes from 1.1. Terrific work all around, it really comes out to a unique work on its own!

There was just one thing throughout my playthrough that stuck out particularly, and that was the overwatch voice. It seems to be very out of place in the atmosphere.

Have you guys considered applying audio effects to the original voices, because I have done exactly that to every voice line and I think it fits way better and doesn't ruin my immersion as much.

Here is a link to the example effects I'm talking about -> Sndup.net
Of course this isn't near perfect but I think it improves upon the original voices and demonstrates the idea.

Let me know what you guys think, once again, I haven't finished this version just yet but what I am seeing is very impressive.

I would absolutely love to see such a dedicated mod team continue upon this idea in the future. You have my full support and I hope you can continue to transform this idea into such a great game.

Thank you so much for all of the hard work. I love every aspect of this mod. Wishing there was a keybind to enjoy the amazing inspect anims at our leisure. That may sound petty but I just wish there was another way to appreciate them on the fly other than sitting there and waiting for time to trigger them. Also a shame that you can only view the first time pickups, one time. Makes me sad. As a student of animation, I'm mostly aware of all of the hard work that went into these and just want to be able to appreciate it more often. Cheers and thank you again.

Isn't that the point of idle animations? Also, one-time pickup animations are played once because...well go figure. If you want to see all of the animations you can set the keybinding's to play it just like what the video does. Thanks for playing the mod!

Quite a fun mod, just finished playing. Hoping to see the full release some time this year or next year :)