From the GE:S Team ; A teaser trailer of mostly beta 4 content, and many other media to whet your appetite. This is an update not to miss!

What does beta 4 have that you most want? Watch this teaser video to find out! With Rolling explosions, 006, Caverns. Facility_backzone, Silo, Rocket Launcher. Grenade Launcher, Moonraker Laser, Basement. Updates to many maps and models. More polish. More code progress and game-modes. More nostalgia, and custom player animations for goldeneye tradition. Beta 4 is going to change the game.

Video by SSL, Music by Goldenzen.

Help show support for the mod for the last day of voting!

Mapped by Fourtecks, Facility_Backzone has a lifespan dating back to before alpha 1 in our mod. Originally by the now retired GE:S mapper, Jeo, the level has certainly come a long way since then. Fourtecks took on this task because of his dedication and vision to create a seamless transition to his counterpart map, Facility. The texture work and lighting in this map are able to draw you in and feel as though you are bond or 006 with this movie inspired recreation.

For a map much loved in the GE:S community, it was certainly unintended to have it miss out in beta 3. But, once you see this refined masterpiece you will be excited for it in ways not possible in the alpha or beta 001 era. One aesthetic improvement of note was the remaking of the bottling tanks (where bond places mines in the movie). The scale of the model is now fixed, so where you got caught up running inside them in the older versions, simply won't occur now. This level is well worth the wait, indeed! 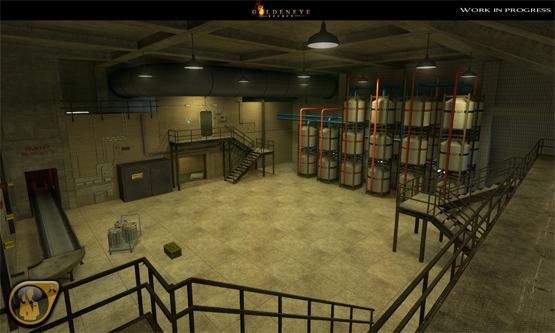 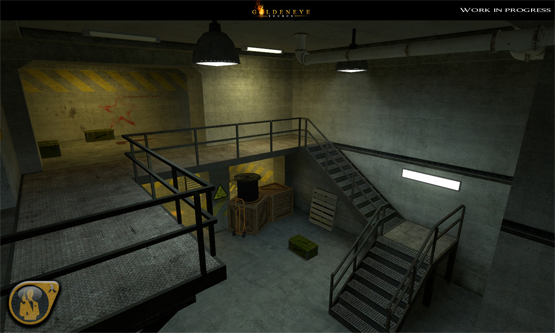 If you are interested in more about this map, from the horses mouth, Mike (Fourtecks) has a blog on our forums in which he is giving many insights into the level. Check it out HERE

Last report we mentioned a character going into game, an update to runway, and concept art we have been seeing internally from our recruited 2D artists. Here are those and some more for your visual enjoyment! 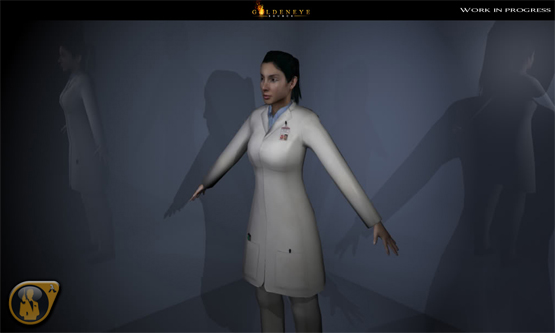 She is going in-game as we speak and belongs to the Mi6 Team. Model and texture by Spider. 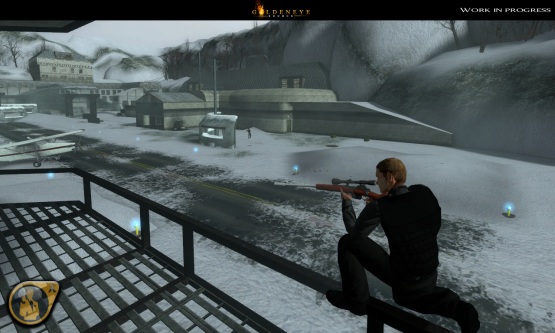 This sniper tower is to replace the old building attached to the side of the map. The new structure is nostalgic to the original game and also looks great, while giving the elevation to see and snipe enemies all the way across the runway. 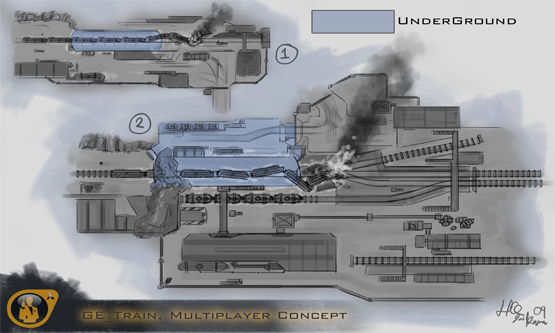 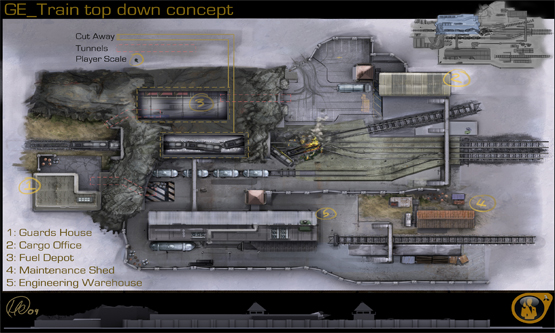 With Hypergear, and the recent addition of Mcharris to the team, the project now has two dedicated concept artists to help with the unknown design elements such as train shown above, by Hypergear. Mcharris is also working on All Bonds concept work to assist our character artists, but for copyright reasons we can't show them here. You should check the forums in coming days we may be able to show them there.

This is just fun, who doesn't want to see rolling explosions on the revamped, and beta 4 ready facility_backzone?!

Next update will be focusing on code elements from Killermonkey and Viashino, specifically shining some light on upcoming game-modes. Plus some other super secret things for now. We hope you enjoyed our teaser trailer and the other media in this update. Thanks as always for your support!

Remember, our forums and website (being revamped) are always welcome places to hang out, support us and find more!
Goldeneyesource.net

cute video, too bad the explosion effects are so cheesy :(

Whaat? I love the explosions.

I mean yeah they are lame. Did you notice they didn't put hands on most of the guns? So unrealistic. /sarcasm

All respect, has he seen or played GE64? The explosions have been re-created specifically for nostalgia more than super realism. There may always be tweaks but fundamentally this is the style.

Amazing mod, great update! Everything is looking fantastic, starting to not be able to tell it's even a source mod, great work.

Nice trailer with good music!
Loved every beta release and it looks like 4 will not disappoint.
Keep up the amazing work team :)

Awesome... the texturing is really nice, starting to look like it's own game and not just another source mod!

Looking awesome, will have to download when its released :)

Good job guys. Not played GE:S for a while, this gives me the perfect excuse to start playing again. :)

keep it up! Been playing ge64 for days in a row, and cant wait for beta4!!

Very impressive teaser, the new content looks great. The explosions for the grenade launcher are awesome by the way.

Great work guys. The laser sounds a bit off, but I never used it much in the original so no loss there. :)

The laser is one sound that is in WIP stage. It may get tweaked for the release.

Good observation, we are trying to work with the particle effect for the laser tracer. It is very difficult to get the look we want and to make it not look weird.

I liked everything, good job!

I think I just made mess in my pants. Fantastic update!

GES is already a barrel load of fun and reminiscence. This looks better.

This is going to be fantastic when this comes out. One problem I have with this though: why doesn't the rocket launcher make the same screeching noise like the n64 original?!

This is being addressed. You will be happier with the release build sound for RL :)

Awesome!!!Can't wait till this is finished!this is gonna be awesome!like some of the guys said, this doesn't even look like a mod.It looks more like its own game!seriously!Keep up the good work!

Oh yeah i also miss the schreeching sound the rockets used to make.

This is starting to look more like the classic, nice job on the new effects, maps, and characters!