Actalogic's lead LD describes how we simplified the iteration process.

(Prior to reading this article, I recommend you delve into my piece on affordances and obstructions.)

Hi! My name is Andraž Gruden and for the past three years, I’ve been working as Level Designer here at ActaLogic, making the upcoming sensation Wayfarers: Call of Osiris (WCO). The setting of the game is Egypt and the locations are scattered all over the country. This made us very dependent on both digital and physical resources. However, the whole situation crippled our communication and logistics, delaying the development and putting the whole project in jeopardy. Voiceovers, motion capture, consulting and other elements that required collaboration with Egypt were severely affected, while it proved barely feasible to manage a project of this magnitude remotely. Therefore, we decided to open our project to the community and show that Wayfarers: Call of Osiris is a gem worth backing.

Iteration as a core feature

From a project management perspective, game development is a daunting undertaking. Departments are interdependent and workflow bottlenecks often occur. To avoid these, many studios use specially crafted systems and/or methods, but these eventually become cumbersome and overly complex. That’s why the scrum master is actually a job, not just a role. At ActaLogic, we use a simplified agile approach that combines almost everything in a way that best suits our needs. We’ve taken iteration as a core feature and built a process around it. Here is the PASS system in action.

Every developer encounters hurdles, and one of the core problems proved to be that WCO’s level design mixed common level design techniques with realistic digital museum aspects and real-scale locations. In short, everything needed to be authentic, even the scale. Especially the scale. But when you approach this kind of work with prevalent game and level design techniques and principles, it’s like looking at all the shapes being put in the same square. 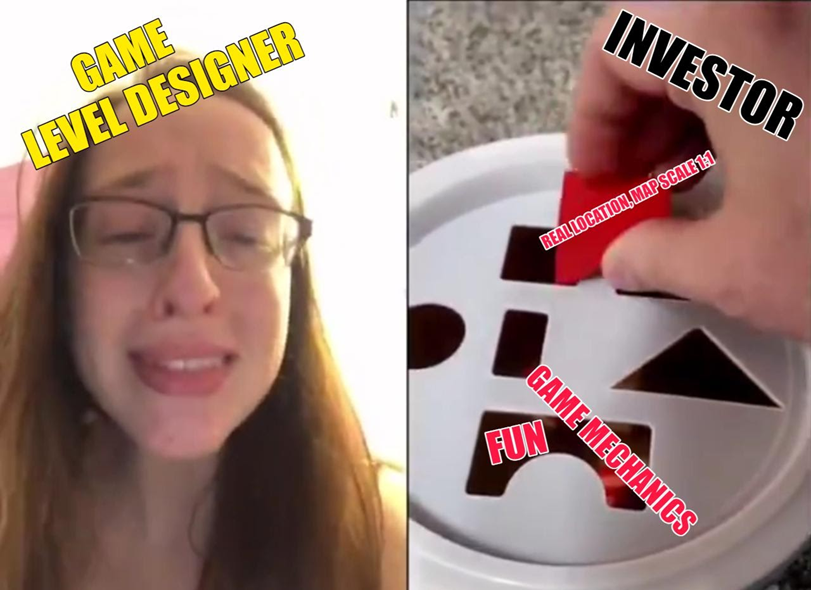 The game takes place in real locations throughout Egypt, such as Karnak, Cairo, Giza, and the Valley of the Kings. Grandiose structures tell stories themselves as the player glimpses their magnificence while simply moving through the vast landscapes surrounding them. However, when the locations became too large, navigation began to drag. This had to be fixed with cutscenes or physical barriers like walls and fences. It took us a while to realize that our hidden underworlds were a great counterbalance to the slow movement on the surface.

At ActaLogic we use the acronym PASS, which stands for PRESENT, ASSERT and SOLVE the SUCKER. To "present"; means to imagine all the problems, their derivatives and relations between them. By "assert", we establish which roles or tools are best suited to solve the problems. And "solving the sucker" is self-explanatory. If one PASS is not enough, make it two, or three, or more. Now, I know that you know that we know where this is going. 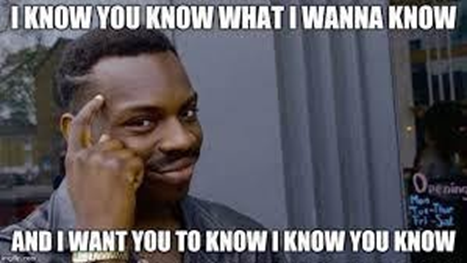 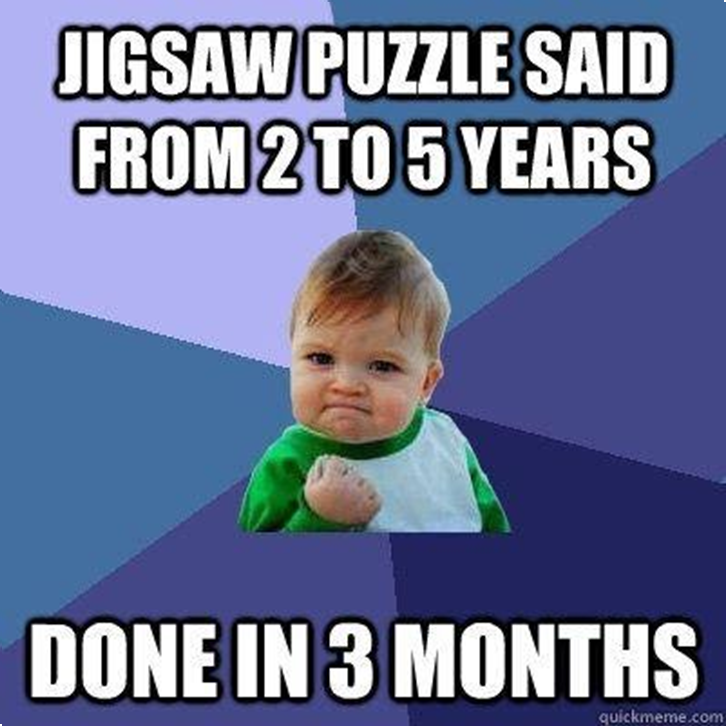 Karnak temple is a great example with its large layout for this kind of game. Let's do the first PASS! 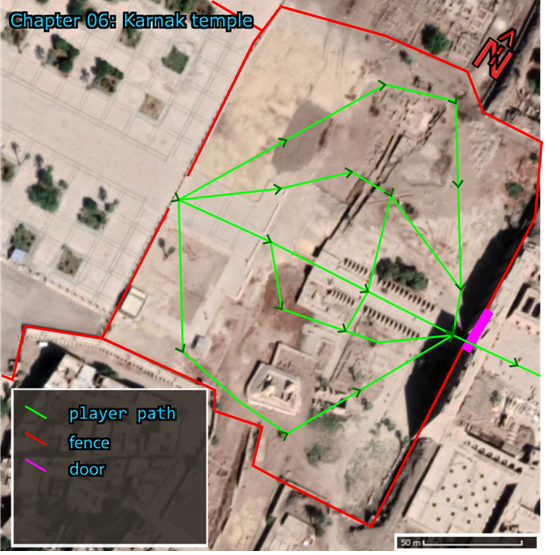 As you can see, the player's path is all over the place, and he has a lot of approach vectors. Placing collectibles in areas like this is a serious headache for level designers. We don't want the player to come up empty-handed, even if he's wandering aimlessly. Overlaps between approach vectors are useless in guiding the player and ensuring they can achieve 100% completion in one go. Combat encounters caused even more problems as each vector pointed at the enemies created an opposing vector. This led to a number of undesirable results and frustration for the player. And we haven't even mentioned the metrics yet. Those went out the window before we even started. 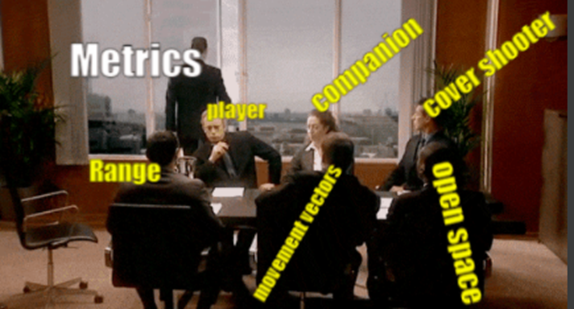 Before commencing second PASS we have gone investigating the site and found some really helpful solutions. Ruins are often scattered with material being rebuilt and restorers, assembling back crumbled pieces thus being protected with fencing or surrounded with scaffolding. Also such vast archaeological sites are often well visited and custodians arrange the place so that visitors' fluctuation is not disrupted, therefore we didn’t have to apply any artificial limitations.

As for the combat. That was the hard cookie. Since all ranges do not fit our initial metrics from the gym we decided to break encounters in separate arenas. Though that saved us some headaches, geometry proved to be an issue by itself. Temples have a lot of debris, piles of gravel, stones in different scales and sizes. Attaching players to all of that mess was a no go. And more, deleting those obstructions just to make space for combat and room for intended combat navigation would spoil locations authenticity.

We came up with the idea of presenting covers to the player in the same way as climbing bars. The player would see a special signifier that tells them the position they can grab onto and the affordance of the object (height, length). We decided to use a blue decal, which is clearly different from the climbing decal. This system proved to be the best choice. Battle arenas can be scattered anywhere in the temple, and the covers show the intended play path. We now had a rationale for the placement of crates, crates, barrels, and other cover elements. And, of course, we considered alternate routes. 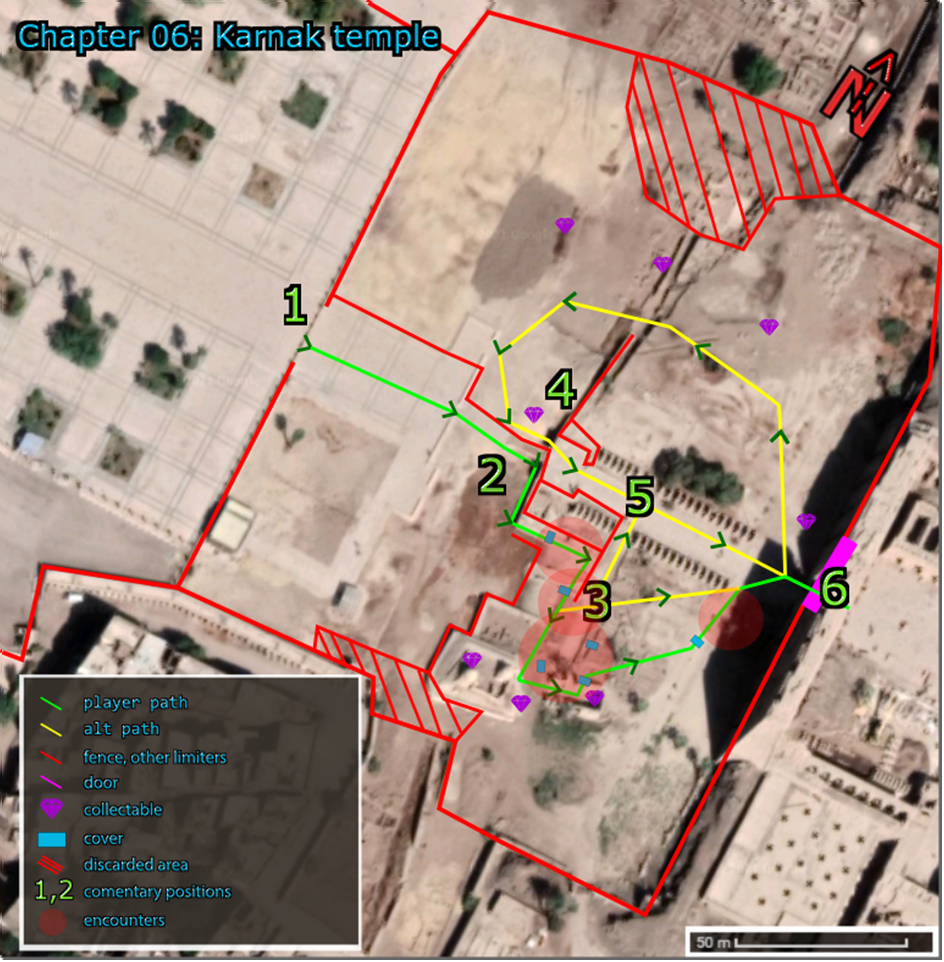 There you have it. You are witnessing a month's worth of PASSing. The idea was to hold the player's hand so he doesn't get frustrated. He starts at 1 and soon sees he can't get to 4 yet. There are a few opportunities to place collectibles here. The player goes to 2 and enters the bottleneck. There are covers lying around along the way that he can use. Now let's have the player go to 3. From here he can go wherever he wants, but a general path has still been set. If the player follows the designated path, he can get all the goodies.

These are the two best intended paths. Both allow the player to approach the combat encounters in the safest way possible, while the second leads to all collectables.

[Look at that bottleneck!]

It wasn’t so painful to realize that the rectangle could fit into the square hole. It was just that our prejudices and habitual ways of thinking prevented us from stepping out of our own thought patterns. We often put ourselves down and look up to the greats, losing our authenticity in the process. Here we took a bold step and tried something new. Even though the encounters on the surface seem somewhat predictable, they are very different from those in the underworlds. Predictable versus unpredictable. This led to a unique pacing and beat combinations in Call of Osiris.

In the pre-PASS stage, we identify all the conditions, variables and influences, and try to fit them together. At the end of PASS, a jigsaw puzzle forms before the team. If this puzzle doesn’t convey the intended design, certain pieces are discarded and others added. There is no way to predict which pieces will reveal themselves in any single pre-PASS stage. New pieces often emerge during PASS. We add them and continue PASSing until the picture becomes clear.

The PASS system is agile and fast, and the method doesn’t change during development. Its magic lies in the assertions (puzzle pieces), the tools that are equipped each time you initiate a PASS. Each subsequent PASS upgrades the previous PASS, making it better equipped for the task at hand. PASS-ing is like probing a problem from a different angle until it is solved. It means no extra expense in money or time, which is crucial when a design needs to be fulfilled in limited time and with a single methodology that is flexible enough to be applied to anything.