Further to recent developments for the mod Star Trek Armada 3, I recently mentioned that we're well on the way to completing our in-game ship abilities. Here's a quick run down of the current federation ship abilities we have in place.

Further to recent developments for the mod Star Trek Armada 3, I recently mentioned that we're well on the way to completing our in-game ship abilities. Here's a quick run down of the current federation ship abilities we have in place. 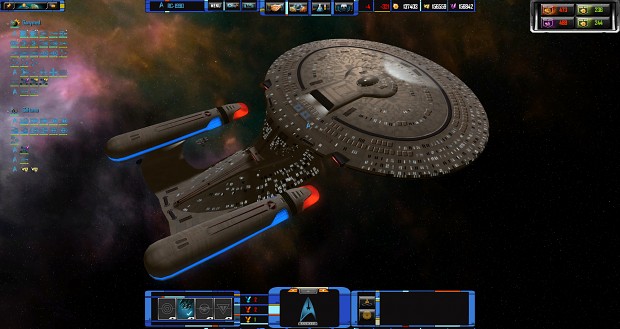 Attack pattern Alpha:
Puts the ship on an aggressive attack footing, increasing damage and manoeuvrability for a short time.

Antimatter Spread:
Spreads a pyrotechnical display of antimatter around the ship blinding enemy targeting sensors for a short period.

Fleet coordination:
The ship coordinates fleet maneuvers increasing their weapon range and their chance to hit

Hangar Bay Extension:
Extends the hangar bays abroad the vessel, allowing a greater number of fighters to be deployed.

Emergency launch protocol:
This emergency measure allows the vessel to deploy fighter craft at a significantly increased rate for a period. 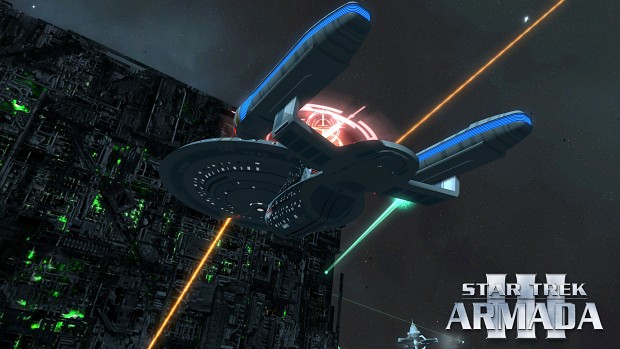 Remodulate Shield:
Re modulates the vessels shields, rebuilding some of the shield power for a time.

Shared Warp Field:
Extends a low level warp field around the ship. The ship itself, and any others in the range of the field gain a speed boost temporarily.

Long Range Scan:
Scans a distant gravity well with long range sensors, revealing everything in the well for a short period of time. 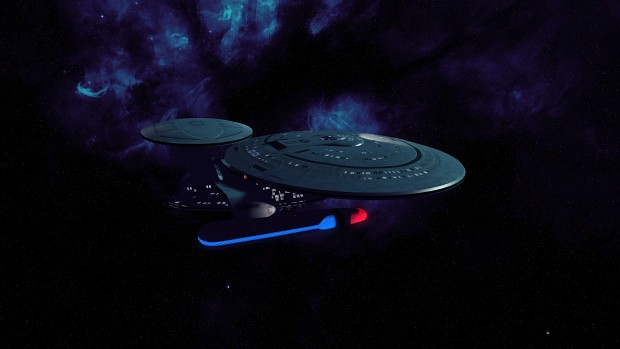 Extend Shields:
Extends the shield grid around a group of vessels sharing all taken damage.

Engineering Teams:
Sends out teams to repair friendly vessels in a radius around the ship.

Target Antimatter:
Fires a torpedo at the enemies antimatter storage, detonating it and disabling abilities for a short time 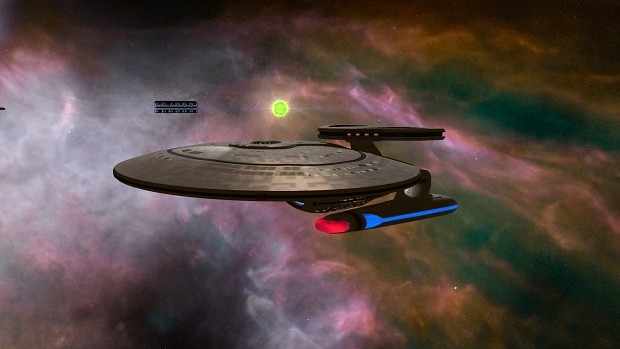 Gemini Effect:
creates temporal copys of a targeted frigate or cruiser for a limited time.

Shield Disruptor:
Fires a beam at the target that disrupts the shields for a short time allowing weapons to damage the hull directly

awesome so excited to play it :D

Looks good, but it's a bit odd to me that Sovereign is playing more of a carrier role over say a dreadnought or a battleship. Why did you decide the Galaxy should have more of an offensive role instead? The mod looks great, but this just seems a bit backward to me is all.

Probably because the two would otherwise fulfill too similar roles as offensive capitial ship, at least in a combat game perspective.

I would have changed the Sovereign class ultimate (guess it is the ultimate) to something like "launches the captain's yacht, acts as powerful temporary envoy on the planet where it is launched".

The launch fighter faster ability is the only one I don't find fitting, otherwise I like how you redistributed the standard Sins abilites on the ships, I'd say they fit well with the ships. Is the number of capital ships finalized? I like how you only picked 5. Do all factions have 5 capitals, or does the number vary depending on the faction?

I would say that the Galaxy fits the Battleship role well. Is was mass produced during the Dominion war and was Starfleets heavy hitter, the sheer mass in itself too would allow it take a beating and sustain major hits.

The Sovereign class however is new and as such not many were built. Its Carrier role with command abilities makes the ship a high priority for both sides.

Even so, the Galaxy class was not made for war. It was meant to be an exploration vessel primarily, one that could house a thousand Starfleet personnel and their civilian families. The Sovereign was built in the wake of the Dominion War to serve as a heavy hitter; a battleship to defend the Federation with new advanced armament.

Also, the captain's yacht is a bit irrelevant in terms of its combat capabilities. It's just a glorified enlarged shuttle for diplomatic missions at best, not a supplemental combat ship. From what I've seen, the sovereign's true strengths (and what it was designed for) lie in its advanced armaments and quantum torpedoes.

Not just that but the Sovereign houses stronger phasers, which are 12 before the refit done in Nemesis and 16 after. The Galaxy has 12/14 depending. The Galaxy has two torpedo launchers with one forward and one aft. The Sovereign has ten launchers in total. One quantum torpedo launcher and three Photons in front and six photon torpedo launchers in the back. Granted it does have good sized shuttlebays, it would have to convert a lot of the ship to house the equipment for the fighters. I don't even think they had it in mind when it was made for that use.

The main reason the sovereign is the carrier is because it houses the largest shuttle bays of all ships, dont get fooled shes no pushover, still one of the strongest capital ships in the game, her abilities though are more focused at fighter launching.

Not really. The Galaxy and the Sovereign class have similiar sized shuttle bays when you put them together. The Galaxy however has one extra shuttle bay over the Sovereign. I just don't see why the most advance, strongest, and flagship of the Federation is a carrier.

@Guest: My suggestion about the captains yacht was exactly to make it a strong diplomat. I would have thought that the diplomat would not only boost relations quicker than a regular envoy, but also give stronger boni that also affected the Sovereign itself. Like providing culture vision for adjacant planets, giving an armor bonus/stronger passive regeneration and providing partial bombing protection akin to planetary shilds for the duration the yacht is out. In turn the Sovereign could gain a boost in antimatter regeneration and offensive strenght. This would permit the Sovereign to strongly support allies on their planets, which would fit with the starfleet mentality, too.

Exactly. Actually, the Defiant would be the closest the Federation has to a true battleship, because it was made for exactly that role, not an exploration vessel, like most of Federation vessels. And since Defiant has cloaking tech doesn't hurt it in the least. The only problem I can see is the ultimate for Ambassador. I would agree to lower it somewhere else so that you can unlock all planets sooner, but that's just me.

I would prefer all abbilities for ships we could see in movies. That's it.

I have mixed feelings about the Sovereign class but i do agree with Briaya about the most advance being a carrier maybe scrap the Emergency launch protocol: and give it a phaser boost ability or something to do with its quantum torpedo's. What about the Defiant? is that going to be replacing the Kodiak Heavy Cruiser or will it be a capital ship? Otherwise love the other abilities well done.

The defiant is not going to be a cap ship in game. But don't worry, she's still a "tough little ship".

Well, compared to other Federation ships, Defiant is quite small.

Awesome, looking forward to dealing out those photon spreads with the Galaxy!

I'm more excited about this than I've ever been about a mod. Keep up the great work! I can't wait to send my fleet into battle. Amazing job on the textures and abilities for the different classes.

Just wondering. are you going to have titans?

I would love to see some sort of high level research that allows you top get the intrepid class. as a much later vessel (time period wise) for its size it is naturally stronger than other vessels. But it would have to be a real late research.

The Intrepid class is in game, but is statistically weaker than many vessels.