Post news RSS Empire of the Hand: Past, Present and Future

The Empire of the Hand has always been one of our favourite aspects of the mod to develop, giving us an opportunity to explore an area of the Legends universe which never received much attention. That being said, there are a few places we intend to change them in upcoming releases of both Imperial Civil War and Ascendancy in order to make their art more consistent and fill in some holes.

The Empire of the Hand has always been one of our favourite aspects of the mod to develop, giving us an opportunity to explore an area of the Legends universe which never received much attention. That being said, there are a few places we intend to change them in upcoming releases of both Imperial Civil War and Ascendancy in order to make their art more consistent (being an area with not only some of our earliest 3D work, but also an area where that early work didn't have the crutch of pre-existing designs), flesh out their progression, and fill in some of the holes. In this post, we're going to cover a broad overview of the Empire of the Hand- who they are, what they've been in the mod, and what we plan to do with them.

What is the Empire of the Hand? (What's Canon?)

Firstly, the Empire of the Hand is neither truly a part of the Chiss Ascendancy nor part of the Galactic Empire, although it contains elements of and connections to each. The original plan for the Empire of the Hand was devised between Grand Admiral Thrawn and Emperor Palpatine, growing out of an mutual understanding between the two during the Outbound Flight crisis, decades before the Battle of Endor, that the Unknown Regions were home to many threats to galactic civilization. After eventually being brought to the Empire by Voss Parck and rising through the Imperial ranks during the Rebellion era, Thrawn was granted Imperial resources to explore and pacify the area, and formed his new empire from the Hand of Thrawn, a base on the planet Nirauan. This was a well-kept secret within the Empire. Most believed Thrawn's time in the Unknown Regions was a punishment- an exile imposed by Palpatine. After Palpatine's death, much of the connection between the Empire and the Empire of the Hand would have been lost. Thrawn was still in contact with the Imperial leadership to some extent; he once forced Ysanne Isard, acting ruler of the Empire, to essentially kidnap and send him Soontir Fel, for fear that he would return and take over the Empire himself. Generally, though, the Empire of the Hand was kept separate from its counterpart in the known galaxy, and its command staff was loyal to Thrawn, not the Empire. Even after Thrawn's death, Voss Parck, Soontir Fel and Kress'ten'tarthi, who had de facto control over the Empire of the Hand, refused to rejoin the Empire and at some point surpassed the remaining Imperial territory by several times. They instead were waiting for word from Thrawn (who they believed to not actually be dead) on whether they should align themselves with the Empire or the New Republic. By 19 ABY when Luke Skywalker and Mara Jade discovered the Hand of Thrawn the Empire of the Hand had established control over 250 sectors. 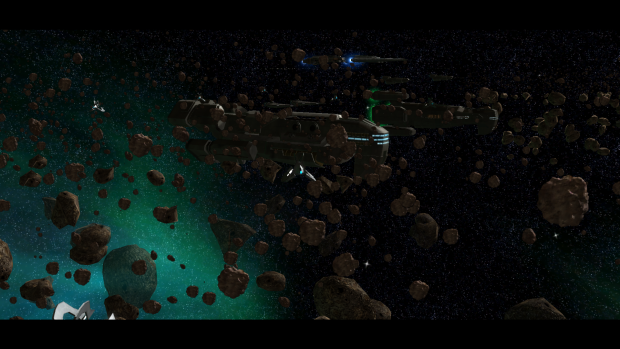 The new Intego, in ICW and Ascendancy

Because there's so little known about the Empire of the Hand, a lot of the work to develop them falls to us. Our approach with canon is typically to try to hold ourselves to the same standard we would any new book or game; do not contradict what's there, and don't introduce things needlessly (for example, we would never add more ships to the New Republic or Remnant when dozens already exist). There are a few instances where we're given specific class names for Empire of the Hand ships and vehicles, like the Nsiss-class Clawcraft, and the AirStraeker, as well as the more vague Chiss Star Destroyer designation. Overall though, the Empire of the Hand fleet is pretty underdeveloped in the lore. The amount of territory they controlled, and the nature of the threats they confronted indicate a fleet of significant size and resources. Their early fleets were comprised primarily of Imperial hardware, but as the links between the Empire of the Hand and the Remnant became more tenuous (to the point of being almost completely severed by Endor, before they did most of their expansion) it would make sense that more and more of the Hand tech would have been directly Chiss, or of the Imperial-Chiss hybrid style developed within the Empire of the Hand, like the Clawcraft and Chiss Star Destroyer. So, when fleshing out their roster for Ascendancy and ICW, we've developed two types of ships- those that were strictly Chiss, and those that were a mix of Chiss and Imperial technology (noted as Empire of the Hand below). We used to have a third style which we called Sycan, based on their primary shipyard which we introduced in the mod, but we've decided to roll that back and keep it to two main slightly different but still connected styles in order to keep them more thematically consistent.

Next up, we're gonna go through our plans for each ship. Those marked with NEW have been introduced since ICW 2.1's release, although may have been in Ascendancy 1.0, like the Intego. REWORK means some significant changes to its design are planned or already done, UPDATE means we plan to do some touchups to the model. Our focus with ICW 2.2 and Ascendancy 1.1 is primarily on the new capital ships, after which we'll be working on the reworks. This means that some of the reworked content will likely be saved for an update after Imperial Civil War 2.2 and Ascendancy 1.1. As some of you may be able to tell, most of the names are Greek words, which we decided to go with as a sort of play on the Republic/Imperial use of Latin words (like Venator, Accdlamator, Imperator). 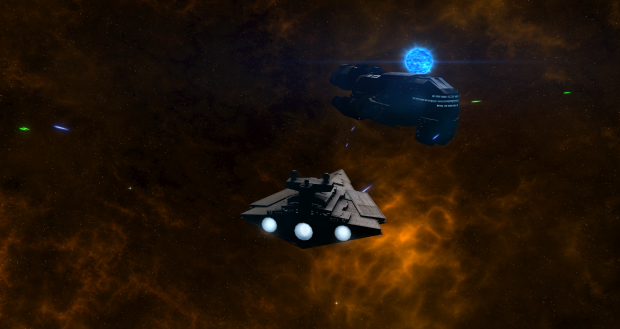 Ships of the Fleet Fleet 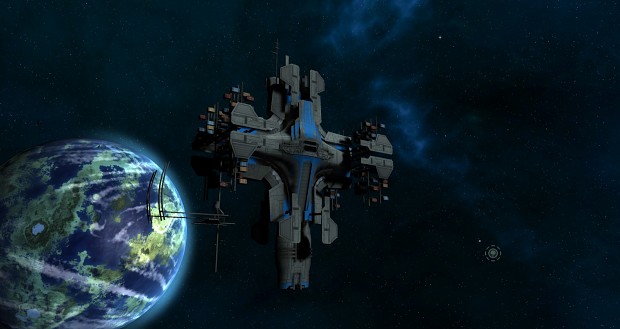 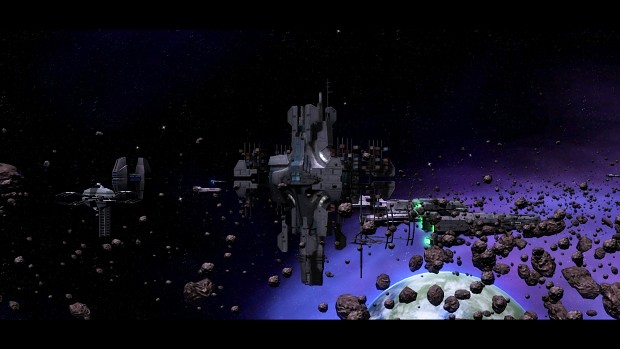 In terms of gameplay, a lot of the ships in the Empire of the Hand ended up being a lot more versatile and therefore powerful than we would ultimately have liked in previous versions because they had a few serving double or triple duty in different roles. This is another thing being addressed by several of the changes. Overall, with a properly-composed fleet, this isn't meant to be a nerf to them in either Ascendancy or Imperial Civil War (unlike ground, which is getting significantly nerfed for them), but should make people have to think a bit more carefully about what ships they want to bring instead of "I'll take 50 Phalanx, please" regardless of what they're trying to do.

But I still don't see an SSD?

And we don't intend to give them one. In general, Thrawn considered the use of superweapons a waste of resources. Also, considering the needs of the Empire of the Hand (a presumably smaller force to lock down a huge territory), the Hand fleet would likely rely on a larger number of smaller, faster ships they could deploy as needed, and the loss of which wouldn't cripple them. When it comes to planet lockdown though, we have given them the largest starbase in the mod, which allows them to have strongly fortified planets, and lets their fleet focus more on fast strikes than planetary defense (especially in Ascendancy). Their defense structure options in general are being expanded, from just the Brask and the Visvia into something which allows a bit more coverage.

Boots on the Ground
We intend to do pretty much a complete overhaul on the Empire of the Hand ground forces in ICW at some point, but that probably won't be done for 2.2. The changes in 2.2 focus more on balancing what's already there, and bringing them back into line with the other factions, especially the Rapid Fire Tank.

If you would like more information about upcoming features and releases, check out our site and forums at www.thrawnsrevenge.com or our ModDB profiles for Imperial Civil War andAscendancy. If you're interested in longer-form "Let's Play" style previews of versions in progress, lead developer Corey regularly plays through early versions of Imperial Civil War and Ascendancy on his channel, Corey Loses.

So neat to see such creativity and loyalty to lore in one beautiful bundle. Keep up the good work!

Jesus, are people still asking for an EotH titan/SSD ? How many times do they need to be told, that there will be no supercruisers for the Hand ? I mean really, it just keeps happening and happening.

Persistence can be fatal when there is no drive to seek knowledge behind it.

Looking forward to tearing the New Republic a new one with this fleet.

A interesting read. Love the way you guys treat and care about the level of details. Outstanding Mod-Makers.

How the fleet tenders are going to work?

Within ICW that'll depend a bit more on how we do abilities and will be adjusted accordingly. In Ascendancy, they're the repair/resupply ships.

I don't know if it is technically possible with EAWs engine but could such a Repair/Resupply ship be realized by simply giving a ship the passive Repair-Hardpoints ability of the otherwise stationary Repair satellite?

Having the option for such a ship within your forces would open up quite some tactical possibilities during battle itself like i.e. temporarily "retreating" damaged ships from frontline fighting to rendezvous with a Repair frigate on another part of the map, with the opponent having to either chase down the damaged ship/locate and destroy the Repair Frigate or face a ship thought to be largely neutralized again later.

We do plan to do something with repair abilities, however with the way hardpoints tend to work, it wouldn't really apply in that sort of case. You're rarely going to have a situation where there's more than one hardpoint damaged without being completely destroyed (save for HV gun shots), so while a repair ability could tactically improve the longevity of a ship by healing each hardpoint as it takes damage, one meant to repair the ships after they've limped away from the main battle isn't going to be of much use.

I see, that's certainly an important point.
As far as I've observed while playing the 2.2 Demo, multiple damaged hardpoints at once tend to happen only in two situations apart from the HV gun:
1. when the opposing ship attacks the hull directly without targeting a specific hardpoint, shown by all hardpoints taking simultaneous damage as the overall HP of the ship dwindles.
and 2. when Fighters and Bombers are allowed to attack a target with multiple hardpoints on their own accord as each Squadron tends to pick out a different hardpoint to attack.

Thinking more about it, in such situations it is also highly unlikely that the damaged ship even manages to get away in the first place, so any repair ship would have to be durable enough (and maybe even have some light weaponry) to enter the main battle alongside the bigger ships and conduct repairs during battle itself.

I remember also that in some mods it was possible to "recreate" even fully destroyed hardpoints by clicking on them and paying credits for it. Those would be shown in a dark grey color.
I have seen this only with space stations though, not with ships.

Regardless of how exactly it may be realized though, the prospect of the capability to repair damaged ships outside of the Repair satellite is certainly intriguing.

which eras/techs do the ships fit into?