You'll want to watch out for these guys come release. This is a lore article, detailing the backgrounds of Lothlórien's elite units.

When designing our factions, we take special care to 'tick the boxes' in terms of lore. We want to include as many nods and references to the surrounding story and context of each culture, to create a sense of authenticity and show reverence to J.R.R. Tolkien's world. Where possible or required, we like to fill in gaps in Tolkien's lore with our own extrapolations. This is what we call our 'mod lore'. This is especially evident in Lothlórien's unit roster, particularly in its elite units. That's what this article is about.

Exhibit A: Marchwardens of the Golden Wood

In Age of the Ring, we've combined the Elves that stop the Fellowship in Lórien with the Elves that aid Rohan during the Battle of Helm's Deep. These are the Marchwardens - professional soldiers, enlisted in Lothlórien's small, standing army, responsible for patrolling its borders and as a swift response to any Enemy incursions. In this context, Lothlórien's basic units, the Wardens and Archers, are levied Elves that are only called upon when the Marchwardens can't contain the threat. 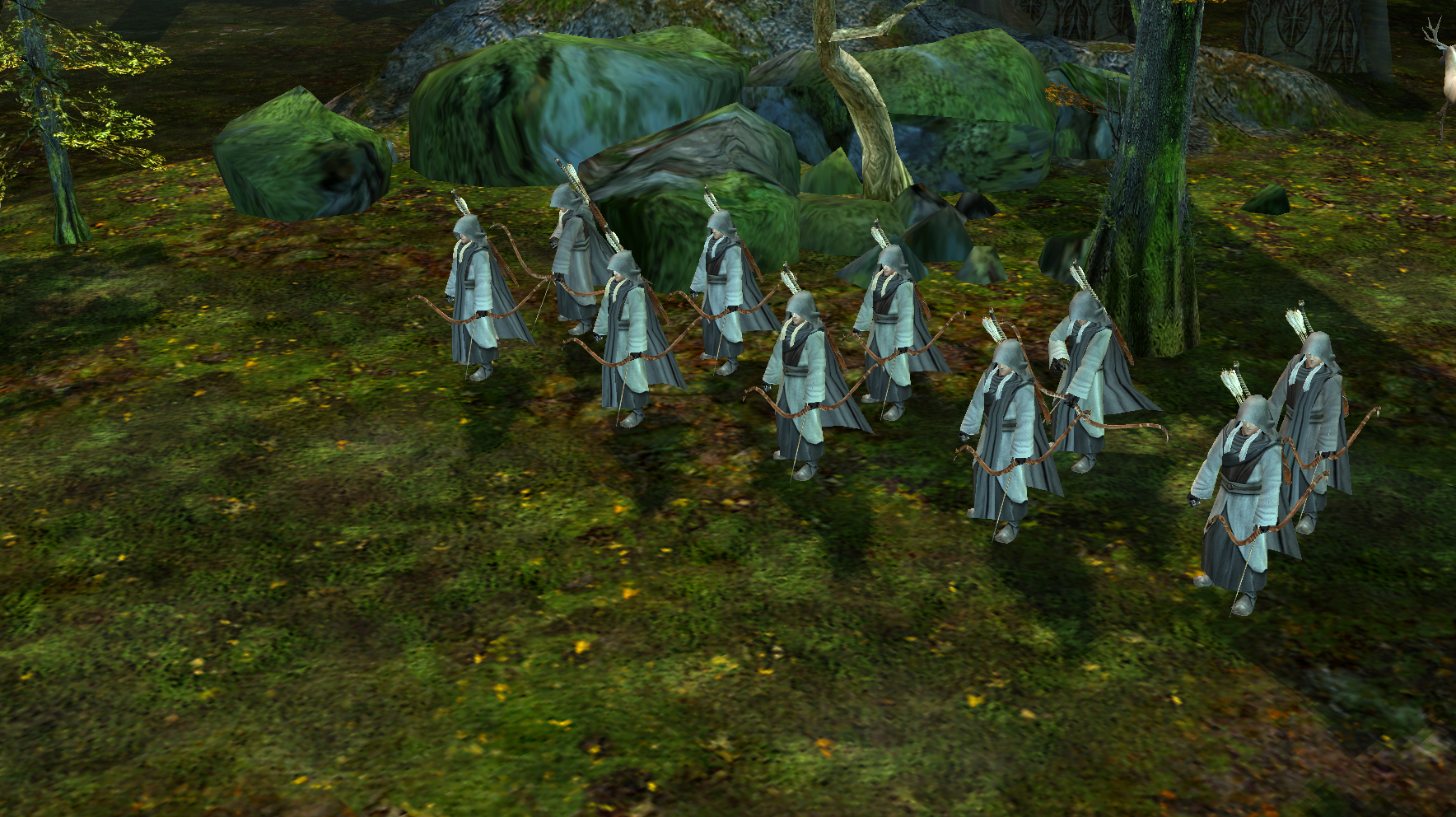 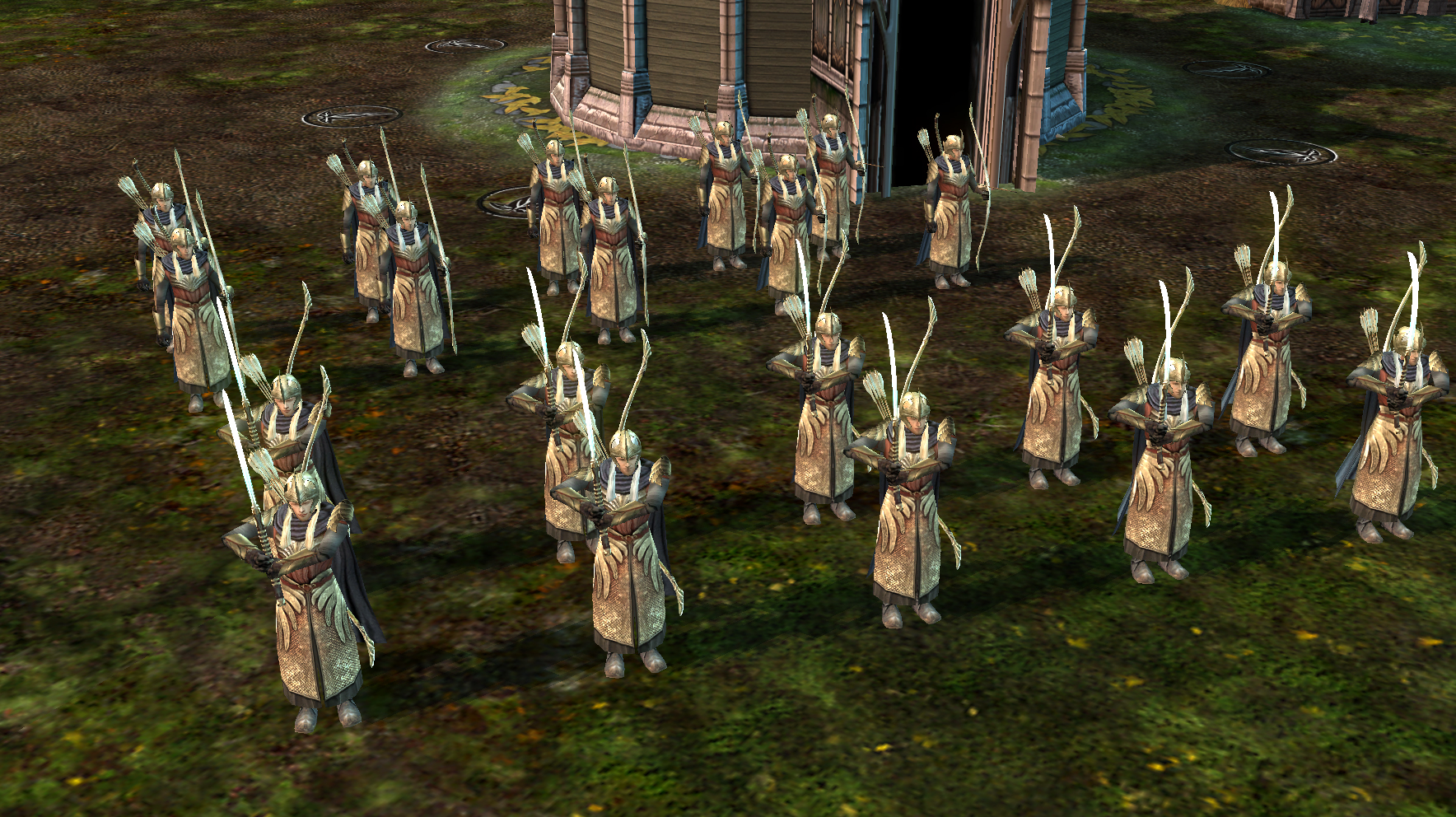 In their regular attire, the Marchwardens look like the Elves the Fellowship encountered. Their heavy armor is what they wore to Helm's Deep. Also note the difference in bows: Lothlórien's ranged damage upgrade comes in the form of Mallorn Bows rather than flaming arrows.

Exhibit B: Knights of Amroth Amdírion

Let's get something clear: these guys have nothing to do with Knights of Dol Amroth. The Knights of Amroth Amdírion, or Amroth's Knights for short, are an example of extrapolation and filling in gaps. We decided we wanted a heavy cavalry unit that players could get through the Spellbook, to present them with a choice to counteract one of Lothlórien's weaknesses. We remembered the Amroth's Knights unit in The Elven Alliance, a mod that's inspired us in the past, and decided to reference it. It's two birds with one stone: a neat reference, and an opportunity to include a nod to King Amroth, the Last King of Lórien. Amroth's Knights, in Age of the Ring, represent the last members of King Amroth's mounted household guard, a group of Sindarin Elves who still uphold the memory of their lost King and defend Lórien in his honor. 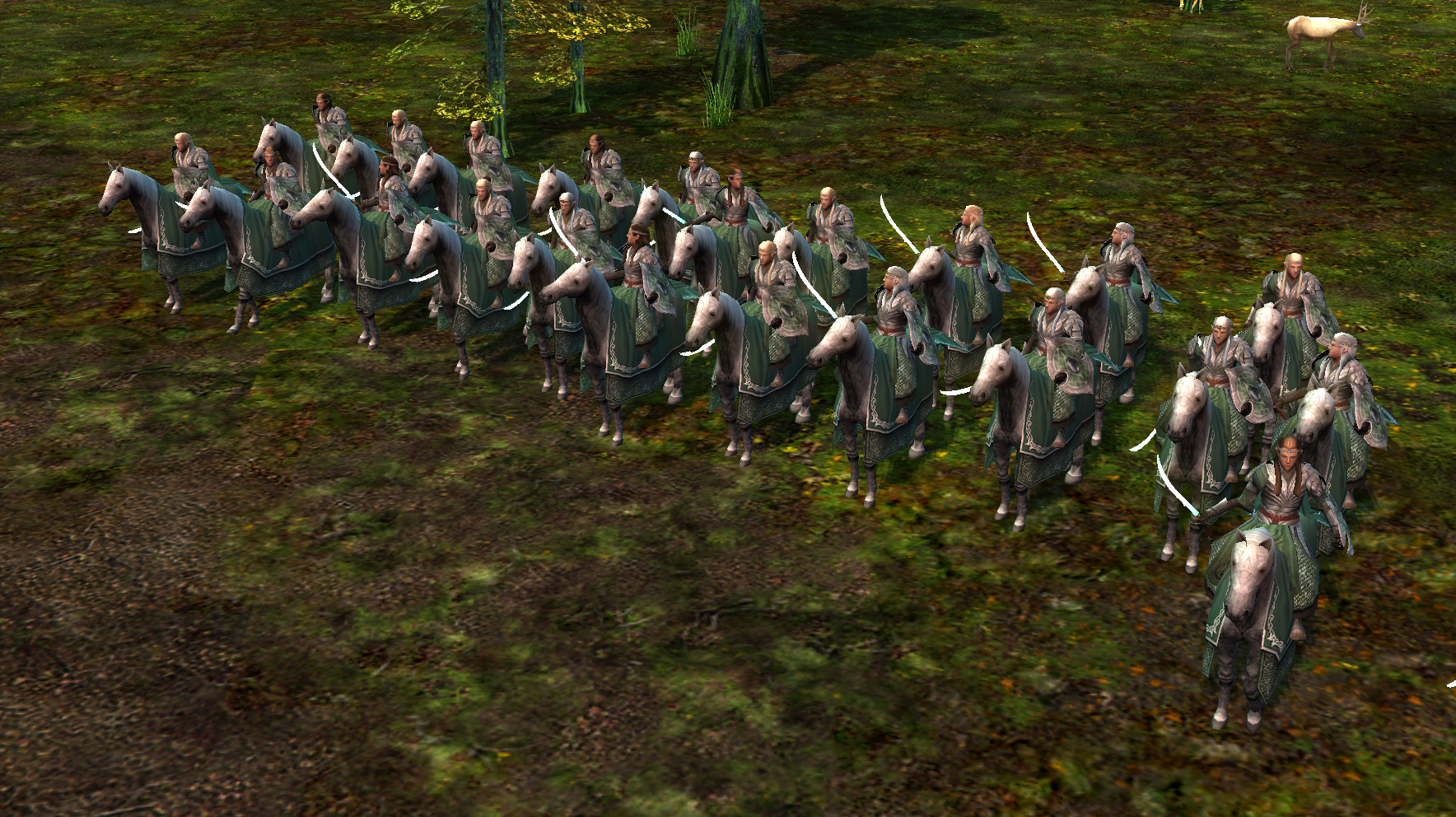 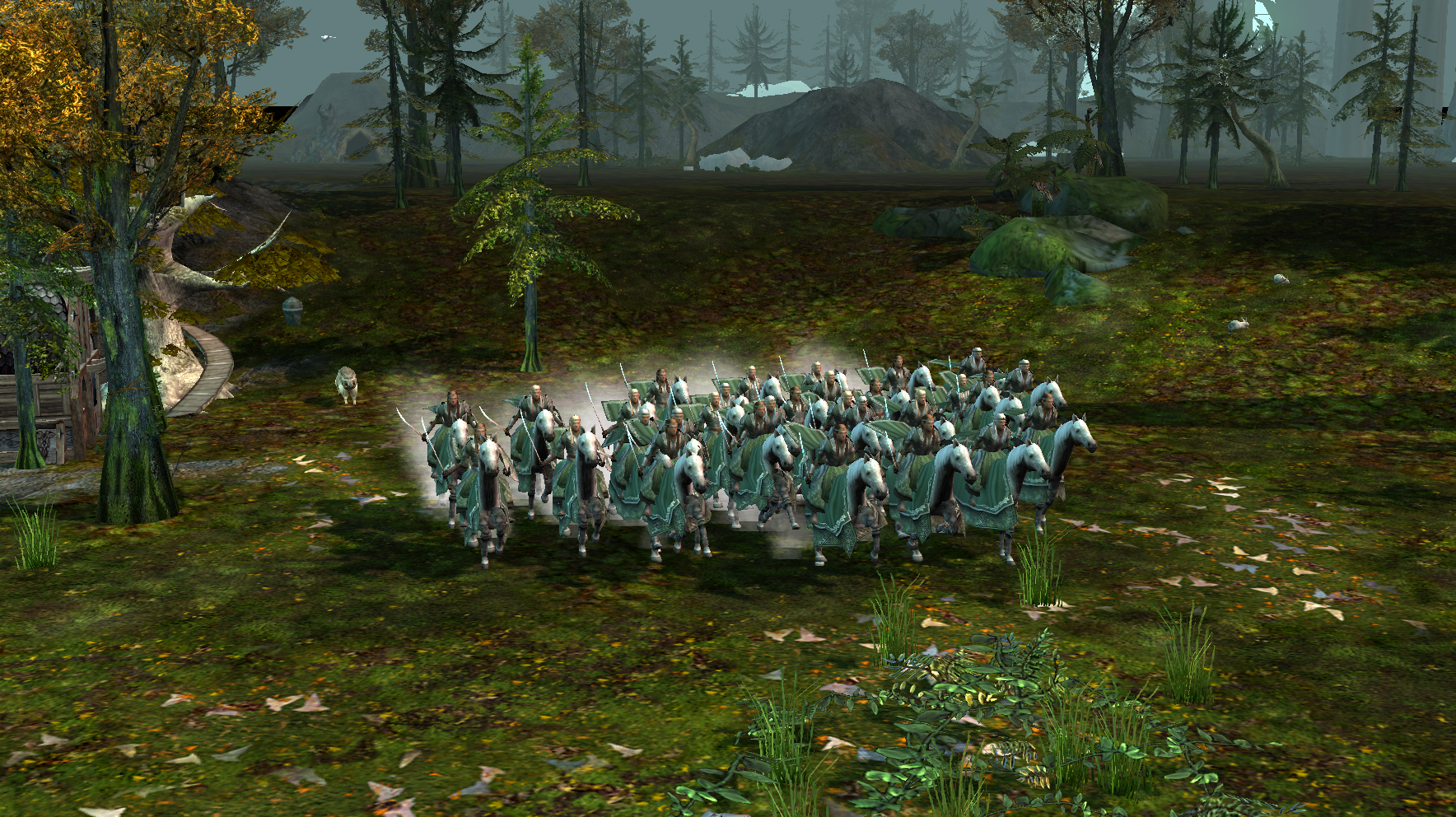 Amroth's Knights have the ability to purchase Shields, increasing their resistance to pikes and arrows by 25%.

Here we have an entirely original unit created by the team. In Tolkien's lore, Nandor were Teleri Elves that decided not to cross the Misty Mountains during the Great Journey and instead turned south, becoming the first to live in the forests of Lothlórien and Greenwood. The Wood-elves, or Silvan Elves, were Nandor in origin. In Age of the Ring, we drive a little wedge in this piece of lore by elevating the very first Nandor to reach the woods of Lórien to a more special status. In our mod lore, this first group of Nandor continues to be a distinct cultural element within Lothlórien - the oldest of the Wood-elves, those who have dwelt in Lórien the longest, and, by extent, the greatest warriors the faction has to offer. Hîr-Hathol is Elvish for Blademasters. They are Lothlórien's hero unit. 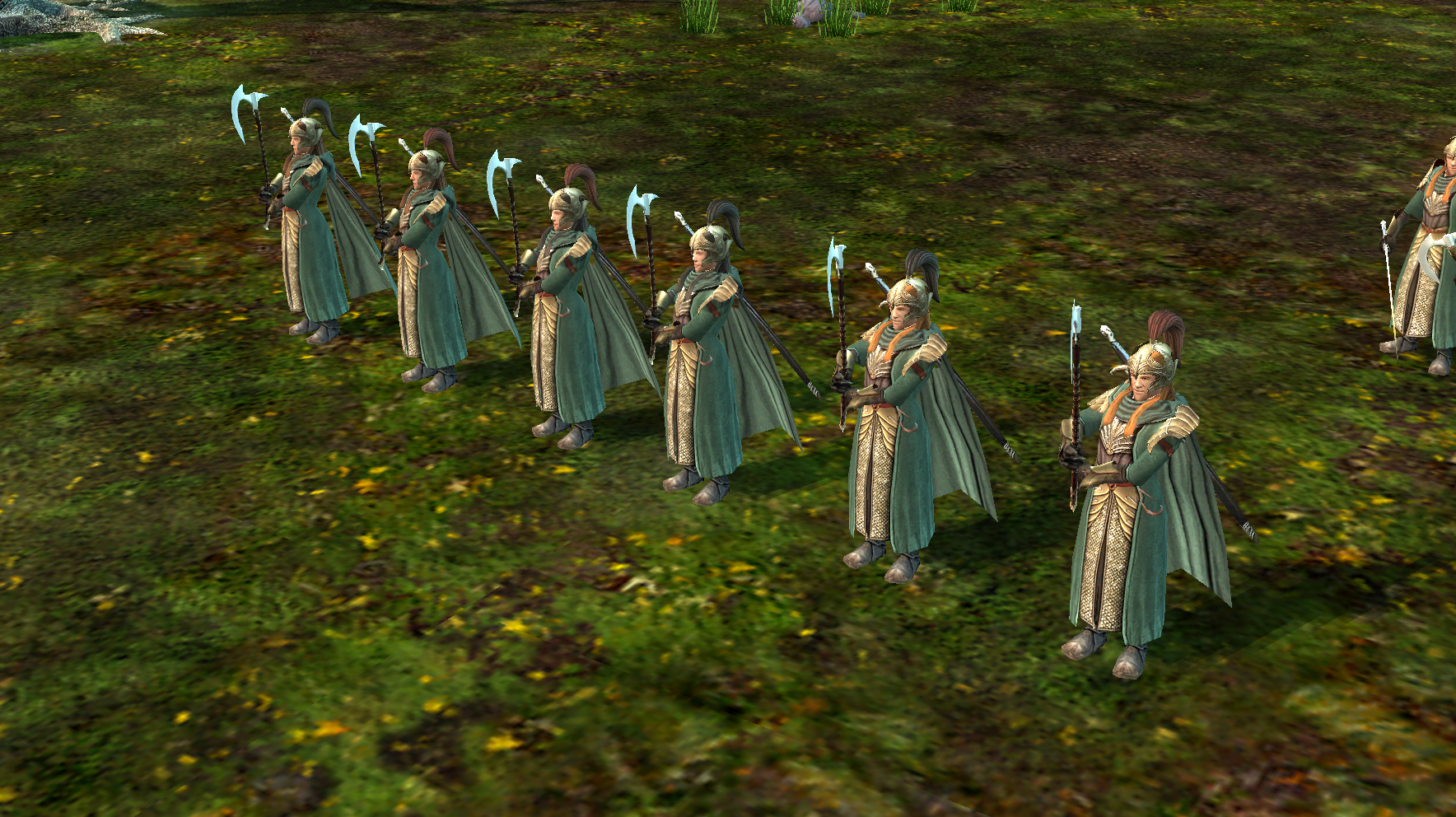 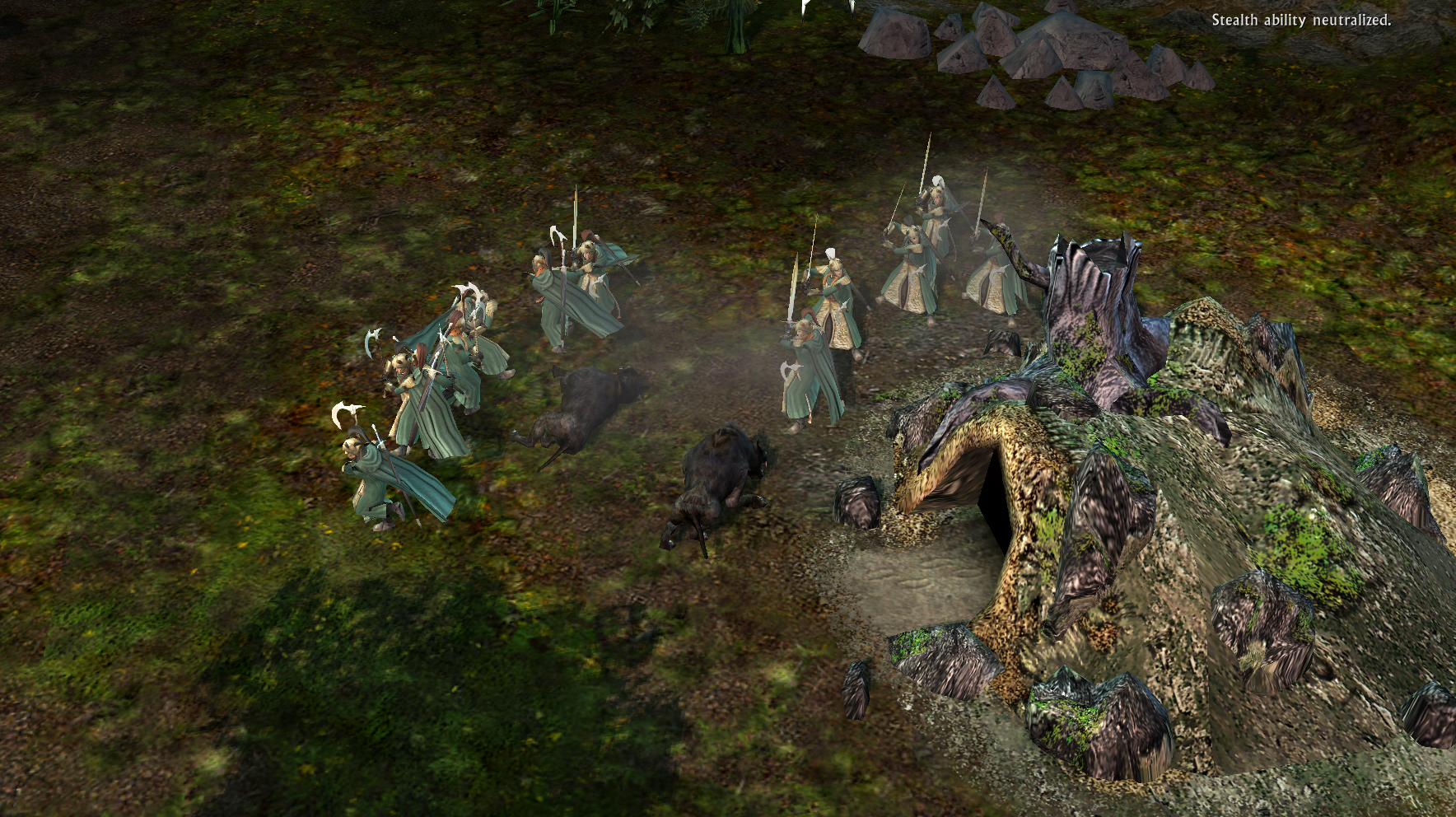 The Nandor can toggle between swords and axes, each with their own advantage. Axes, you say? For Elves? That's blasphemy! But it isn't. The Nandor were alternatively known as Axe-elves, and there are several mentions in Tolkien of Elves using axes. Chewed-out fantasy tropes need not apply in AotR. When the Nandor rank up, they get access to special powers: 'For Lórinand!', granting them temporary invulnerability, and 'Treasures of Ossiriand', a power that grants heavy armor to units within its small radius. Lórinand is an old Nandorian name for Lothlórien, and the Treasures of Ossiriand are gifts handed down from their kin that dwell in Lindon. Ticking boxes.

Yaaaaay.We will have them released by the end of the year. xD

That looks great I love this unit with the axes!!! Good work:)

Whatever the official release date of the Lothlorien release, I look forward to it! Even though I am most eager for the Erebor release I am still looking forward to the Lorien release anyway :-)