Back in 2006, Celeglin released the second beta version of The Elven Alliance (TEA). While the mod was both popular and successful (e.g., made the top 100 mod of the year list in 2006), there was still a lot of unfinished work that needed to be completed. Unfortunately, Celeglin became busy with other things, and he never had the opportunity to continue work on his mod. As such, many fans were disappointed that the mod was never fully completed. After much discussion, the T3A staff and community decided that it was their responsibility to finish TEA and address any balance and bug issues contained in beta 0.9. Due to being unable to contact Celeglin and perhaps straying from his original intentions, the mod was given a new subtitle as to not confuse who the author was of the modified version. The new project became known as The Elven Alliance:Community Edition (TEA:CE).

TEA:CE has just released it's fourth version (version 1.3). The project has evolved over the years, but the original purpose and design has remained the same. Below is some information about what the mod project hopes to accomplish when finished.

The intentions and goals in this edition:

What we will not be doing:

Credits for the Original Elven Alliance:

Credits for The Elven Alliance: Community Edition go the the following:

DISCLAIMER: If Celeglin does return and does not approve of the community edition project, the project will stop immediately and the download will be removed. Also, the original version of Celeglin's mod will still be available to download. It can be found here.

May 4 2014 News
Welcome to Version 1.3 of The Elven Alliance: Community Edition! 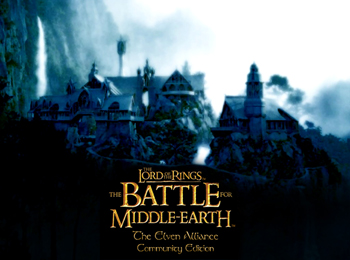 The mod has been uploaded to the following locations for download:
Moddb

A few things to note:

The third version of TEA:CE is now available to download!

Please note that you do not need any of the older versions of TEA:CE installed. TEA:CE 1.3 is all you need and is the most up to date version of the mod...

Version 1.2 contains the highly anticipated Elven AI! Every skirmish map now can utilize the Elven AI for fun and exciting battles! In addition, the hard...

I want to know if there is a tutorial about,how to update the campaign maps like they did in this mod for the good Faction.

Please finish this mod. We will organize a donation.

why do developers make this modes for free
i want to mod too but cant yet cause of my job
if anyone knows plz tell ?

Best mod for bfme. I am still playing it actively after all this years. It has best campaign, which I played many times. I know every aspect of this mod, so I am in a great need for some new content to enrich the gameplay. Is there any possibility for properly finishing this mod, or maybe adding some new factions, or at least some new heroes and units? There are still many fans of this mod here.

Hey, do you know how to zoom-out the camera a bit in-game. It seems to be too zoomed-in and i can see much.

You can download widescreen mod from t3a site, and zoom in and out as you like. There is a map file that you activate in game before playing.

Hey, guys. Did someone try to install TEA on BFME 1.08 patch? Will it work?

Council of Eriador Battle for Middle-earth

Legends of the 3rd Age Battle for Middle-earth