A little news with great improvements for the processor performances of the Moshanyana.

As you may know, I am busy with processor performances for Moshanyana. I work on Adobe Flash, and it's not exactly the best engine to do games with a large screen ( = computer games) contrary to advertisements and web flash games that are pretty good about processor performance actually.
So I'm always working on it, the most useful tricks are reducing your screen resolution or to reduce the size of the window (so without using the fullscreen). But people usually prefer the fullscreen, and I don't know if it's really possible to change screen resolution from Flash. So I work to found some new ideas of optimization. The main problem is that i'm using vectors (bitmaps are really not better for preformances !) and the more animated vector there are, the more laggy is the animation.

One of the solution is to avoid circle for replacing them by squares... Well, actually, the design is cleary CIRCULAR!

But In a way, it helps me, and I turn most of the animated round sprites into square with a vector gradient. And then another idea came to me : I can do outer glow with gradients, without using the really laggy special effects from flash. Consequently, as you can see on the screen, the Original Terminals have now this little effect without lag.

An other good news ? Something I was worring about were the the hitbox test for clipping of OT on the naviguator screen (better than coordinates test), this is perfectly fluid with 1000 O.T hitbox' test all the 2 seconds. So I'm glad to see there is some faster commands.

Actually, with a resolution of 1680x1050, and the little black borders (a small automatical reduce of the screen (less big than the ones in Machinarium)), the performances are well good most of the time. 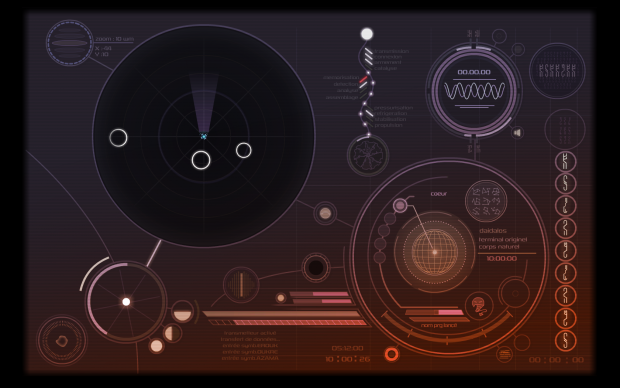 About the other improvement I will tell you later but in the easy-things-to-say I've add some cool transitions effects for the opening of the analyzer, the encyclopedia webdianis screen, the bars that are pointing the elements of the analyzed objects. 'already working on design of the fluid assemblor (bottom left hand corner) and pressure screens (middle of the screen).

I started to move the keyboard, I know it makes a contrast between the right and the left of the interface but be sure that I will fill it with other things :) And you can also seen a new language (with hand-made fonts), I think there will be almost ten of them in the end.

I've also add the detector visual range on the naviguator screen (because now it really works ^^)
And finally, i've add a little directionnal shadow under the lines of the main shape of the Moshanyana, not really visible but I'm not sure to reinforce it, cause it could make a too much big relief map.

To conclude, as we can read in the Merrie Melodies and Looney Tunes end:
"That's All Folks"

Looks great. Saw it on the front page, DEFINATELY tracking this. My only recommendation would be that you try to find a way to move it out of Flash. I'm sure there are better ways to do it using other languages that would be much more effective.

I think one that point for a long time without many solution. I'm completely alone to learn programming. And Flash learning (from AS2 to AS3 particularly) takes me already a long time.
But I'm looking for Scaleform, and I ask myself if this animation running into a other engine trough Scaleform could be faster.