In our latest update, we update you on the status of development and the optimisation efforts. Introduce the GDI Sonic Emitter and Nod Divination Tower and we are joining the rest of the community celebrating the 22nd Anniversary of Tiberian Sun. We'll be featuring exclusive new content for Tiberian Sun Rising on the 23rd of August showing new gameplay, dev Q&A and more!

I'd like to apologise for the slowdown in news updates. It has been all hands on deck working on the optimisation and earlier in the year I had promised more regular updates so I do formally apologise for the optimisations have been very hands-on and consuming between it, RL work and the ongoing lockdowns due to COVID19. However, we've made great strides on optimising TS Rising for launch and it continues to progress well its been quite an undertaking but the results continue to impress. In regards to maintaining more regular updates, I am looking for someone to join our team and help post development updates if you are interested in joining our team and help cover updates on the incredible work of the development team and have a passion for Tiberian Sun please contact me. In the meantime, while we've primarily been focused on getting the optimisation completed and so we can get a beta to you sooner. The rest of the team that isn't involved in optimising are working on other areas like finishing remaining animations, VFX, audio and polishing where we can while the optimisation is ongoing. Something you may or may not notice in these new screenshots is we've done a full rescaling pass on everything let us know what you think! We'd love your feedback either leave a comment here on ModDB or come talk to us on the TS Rising Discord server.

We have also recruited some new team members theHostileNegotiator and Firehawk-Ph4ntom which you may recognise from the C&C3 modding community. They have joined the optimisation team helping us push closer to release and we are moving at an accelerated pace since. If you are an experienced developer with the C&C3 SAGE engine and interested in joining the optimisation team please do contact me. We do have some new updates to share and some exciting news!

Upcoming we have the 22nd Anniversary Event for Tiberian Sun and what we'll be showing and the schedule for TS Rising partaking in the event if you keep scrolling down we also have a new update from TS Rising to share with you on TS Rising! So keep on reading for the latest! 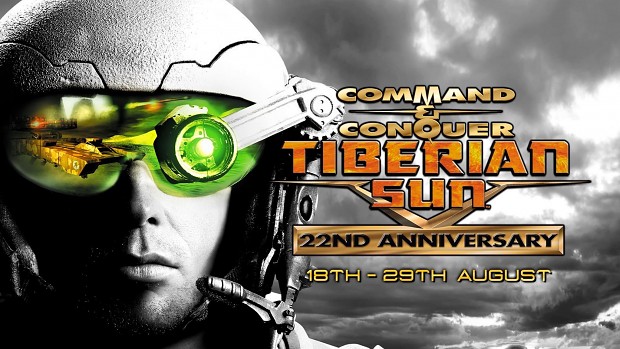 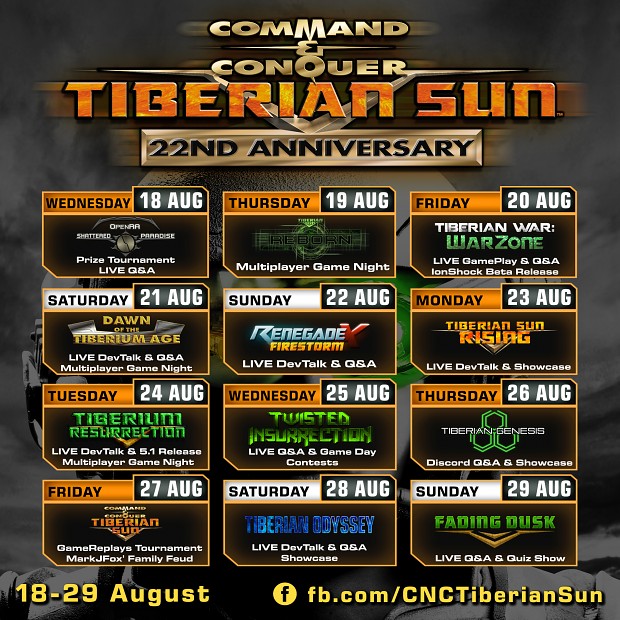 We'll be featuring a live Q&A, gameplay footage showcase, a developer showcase and a final Q&A on our DIscord with any questions after the showcase.

During GMT+1 (the events taking place in GMT+0 but due to Daylight savings this is GMT+1 currently). 22nd Anniversary Tiberian Sun
Tiberian Sun Rising Feature Day (All times are in GMT+1) 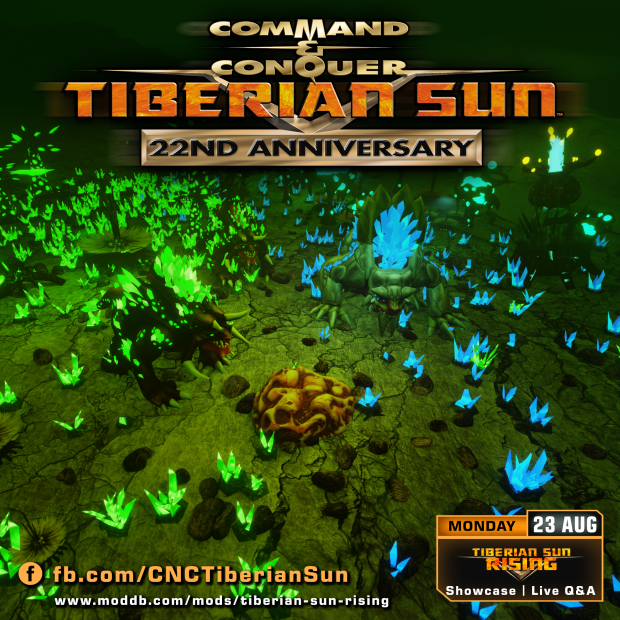 To stay up to date with news on the 23rd of August make sure you give us a Like on our Facebook page, follow us on Twitter, subscribe to our YouTube channel and our Official Discord server for Tiberian Sun Rising.. Please, help spread the word about this awesome event! Through the power of social media, Discord or your medium of choice choose your faction below GDI, Nod or the divine power of Tiberium itself! and spread your favourite image across the internet! 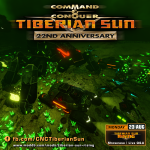 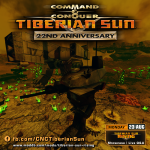 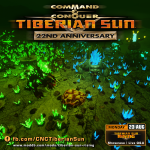 While you are waiting for the 23rd of August to roll around please find a new update! Below featuring the GDI Sonic Emitter and the Nod Divination Tower read the intel below on these new exciting developments in the Second Tiberium War's arsenal.

The Brotherhood of Nods Subterranean networks and their subterranean vehicles have been a nuisance invading unsuspecting GDI bases. Building pavement was previously a measure GDI Commander's had started putting in place but all the time of laying down the pavement and then constructing a base really hampered GDI's mobility and delayed our ability to rapidly set up in a new area. Not to mention being completely vulnerable to subterranean attack until a large area of pavement had been set. The threat of Nods Devil's Tongue's gave GDI Commanders little choice in the matter the heat from those flames could melt through a GDI base with terrifying efficiency. Well, we've had some unexpected developments in the R&D branch involving the sonic crystals that finally give us a more rapid method of defence from subterranean vehicles at long last. 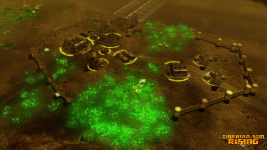 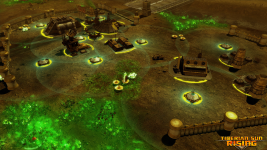 In previous reports Commander, we reported on the development of the Sonic Crystals cutting edge technology we've put into the field. As you know the weaponisation of the Sonic Crystals lead to the development of the GDI Disruptor essentially a Sonic Tank that could tear through armour and even liquefy organic matter if exposed long enough to the beams generated by the Disruptor. What we didn't expect with the technology and caught the attention of both Dr Sydney Mobius and Dr Ignatius Mobius's. Was that the Disruptors Beam under the right conditions could shatter tiberium crystals ever since she observed this in field trials. Dr Sydney Mobius has been working on a different application of the Sonic Crystals she's been trying to fine-tune the crystals for use in the application for clearing Tiberium. Through much trial and error and many setbacks, we finally have a prototype, its still very limited however it's our first breakthrough ever giving us some hope that perhaps we can later develop technology capable of reclaiming areas from Tiberium infestation. It'll still take at least a decade to refine the technology.

This prototype device is called the Sonic Emitter. Instead of projecting a disruption wave as a focused beam like the disruptor, the Sonic Emitter emits a wider field using an array of lenses spread the effects of the sonic crystals over a circular radius. To ensure no danger to our troops on the surface the sonic emitters effects are projected downward underground. They've been calibrated to maximise the efficiency of shattering tiberium crystals which is still quite a slow process. Dr Sydney Mobius has observed upon looking at seismographs there is an amount of seismic activity created as a byproduct of the devices. Not enough to damage our structures foundations however the sonic waves emitted pulsing underground destabilise subterranean tunnels being tunnelled making it nearly impossible for Nod Subterranean vehicles to surface within a Sonic Emitters field radius. 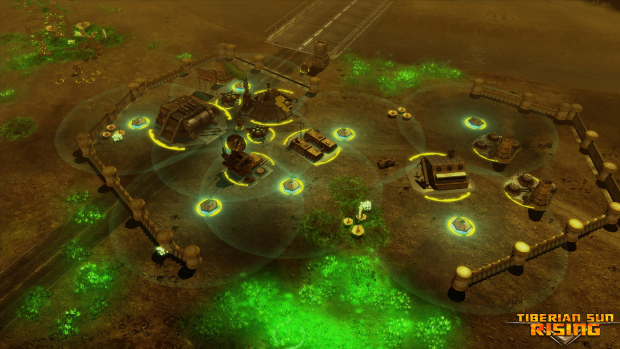 With this discovery, the Sonic Emitter has been approved to go straight into the field for our Commanders to utilise. While they are still just a prototype and require a bases power to operate they will slowly shatter tiberium crystals that try to spread inside its radius as well as protect bases from Nod Subterranean vehicles in a manner that is quick to deploy. Commanders no longer need to waste valuable time in the battlefield laying down pavement waiting for it to harden and then manage to construct a base.

We are still observing some infighting between various Nod Generals and Commanders for power, resources and control over different regions. It seems even the Brotherhood of Nod has needed to develop technology to counter enemy subterranean vehicles. While there was a time we observed Nod laying down pavement foundations it's been quite some time since we've seen this behaviour from a Nod Commander. Nod bases seemingly appear out of nowhere with their Subterranean MCV's ability to tunnel underground. There has been an unknown device we've observed appearing in Nod bases and we had previously identified the device as a drilling device to pass supplies to subterranean facilities. The intelligence we managed to uncover from a mutant shiner camp that Nod had been experimenting on revealed the true nature of these devices.

Mutants that had been transported to and from a Nod Research facility via Subterranean APC to evade GDI detection. Revealed that the Subterranean APC's had warning alarms aboard to warn the crew of dangerous tunnelling conditions particularly deadly levels of Tiberium Radiation that the crew could not survive. The mutants questioned revealed these alarms triggered just prior to their arrival at the Nod Tech Centre Research facility. 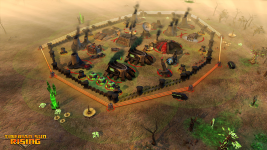 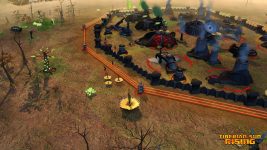 We sent out scouts and observed these structures we'd nicknamed Thumpers as they appear to be thrusting material deep underground. Noddies call them Divination Towers they do indeed bore a deep tunnel as we had observed but what we didn't know. That a yield of highly concentrated tiberium is then pumped deep underground. This emits a strong field of Tiberium radiation that is deadly for any crew aboard a subterranean vehicle trying to drill through. These devices help disguise a Nod base to enemy Subterranean vehicle sensors detecting it as a highly concentrated Tiberium field. Nod in their early days with subterranean vehicles lost many vehicles and crews to extreme tiberium conditions and vein hole monsters found in the depths of the earth. There were crews turned into horrific mutant shiners which did not fit with Nods Divine vision for Tiberium's effects so the warning sensors were installed in all subterranean craft to protect the crews and protect the investment in the vehicles. 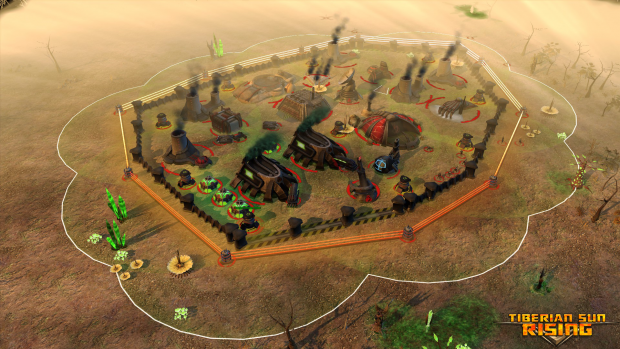 These Divination Towers it seems that preventing subterranean travel wasn't their only purpose. By dumping highly concentrated tiberium core's deeper in the soil it is spreading the effects of Tiberium to the nearby environment by mutating the root system of plant life in the area. The tree's on the surface mutate into Tiberium based flora and blossom trees leading to the formation of new tiberium fields. It seems the depth has been carefully calibrated to be just low enough to not cause any immediate effects to Nod troops on the surface however it is unclear the effects of long-term exposure to Nod troops stationed on the base all year round but Nod doesn't seem too concerned. Like the Sonic Emitters, these Towers are powered the tiberium cores dumped lose their effectiveness over time and new cores need to be thumped down to the depths so knocking out a Nod bases power will make them vulnerable to subterranean attack just like a GDI base losing power to their sonic emitters.

Awesome! I love Tiberian Sun so much.

Thanks for the update :) August 23 can't come soon enough!

Awesome. I can;t wait to see it

HOW CAN WE DOWNLOAD THIS MOD AND PLAY IT? WISH IT HAD SKY VIEW OR PAN DOWN VIEW