In this dev. log we will compare timing with the two different attacks that our hero can use, based on the feedback we received from players who tested the demo.

With the demo release for a couple days, we received lots of feedback who helped us in many ways. Positive and negative opinions are welcome. Thank you everyone who spared some time playing the demo and more yet to give us your opinion.

One topic was redundant in many feedbacks, and it was the shuriken x sword use. Some players said that the shuriken is really overpowered since you have infinite uses and most of the time you don't even need to use your sword. We watched some gameplays and noticed a behavior where some players preferred to play in a safer way, tossing shurikens from a distance, while others went to full sword fight (I'm like this). There where many hybrid players too, what is nice.

In our opinion this is not a problem at all. We do want to give players the freedom to play the way they like best: shurikens are safer but take longer to kill the target, while sword is way faster but a little risky. But we do agree that there could exist more enemies who are resistant to one of the attacks. In fact, there is one: the slime can't be hit by the shuriken, so you're forced to use your sword. I believe this is healthy to exist in some enemies but not all of them. In the end this feedback was really helpful for us to make the final game even better. Its our first experience with a game like this, so we're observing and discussing a lot.

Below there are some gifs that shows more about the differences between fighting with the sword X the shuriken. Every comparison have the same number of frames and the attacks start at the same frame too. This is for build 1.0.

This article is not meant to show which weapon is better. The objectives are to compare their effectiveness, adding a better demonstration about how it works and to gather a better feedback from players or anyone who would like to help.

For the actual build, the shuriken have the same attack power as the sword. However, shurikens have a delay until you can toss a new one, while the sword is limited only for the player abilities: the faster you press the button, the faster your attacks are.

There you have a risk of being bitten if you approach too much, but if you're fast you'll never feel those ferocious teeth. In the other hand you can be safer and spend more time tossing shurikens from a distance. We agree with a feedback saying the shurikens should not work against all projectiles, that's something its being discussed.

In this case you have a limited time to hit the weakspot. If you're skilled enough you can kill this kind of enemy way faster with the sword, but with higher risk. But with shurikens is way easier to avoid the spits and you can hit the boss too, but will take way longer.

In the end, we believe that the best way to use your weapons is your decision. Also, its situational, where sometimes you'll find better use one over another, something personal. In the other hand it would be nice to have more enemies who are resistant to one weapon and force the player to try new tactics. 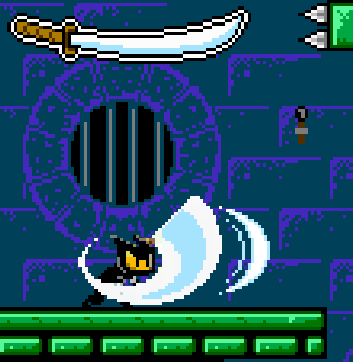 As an extra, we both agreed that the Sword Extensor was not interesting enough. In the 1.0 build you need to get 10 winds in order to use the Power Up, but once you get hit you lost 3 winds. After a while you just don't want to care about it. We want to change that, so in the next tests we will be making the extension stronger and, also, easier to get. We'll modify to something like 5 winds to get full, and losing only 1 at hit. You'll need very fewer hits to kill an enemy with this power up, making it more worthy to maintain. As a bonus, thanks to the Extensor you can hit the Alligator even if he is facing you with the shield.

Again, thank you very much for all the support and feedback.