Hey guys.
We recently have been working on the mod, however due to out leader being transfered to work in Japan, the team decided to have a meeting and set the goals for the mod.

First of is: The rigged Grimmjow
Damaera who joined from the NNK Mod as Animator, have rigged the Grimjow model: 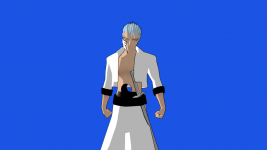 And it will be animated soon.
Grimmjow haven't been skinned yet, but we will bring an update when that is done.

Second is: The HUD concept
DLpnd recently completed one of his exams and worked hard with the HUD.
This is just a concept, but it looks nice. Remember that this is just WIP. 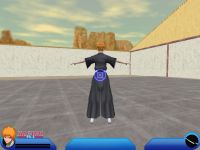 We will add HUD animations in the future.

Coding and mapping
Due to the lead coder getting transfered to Japan, Roei have taken that position, and will be redoing the current code, cause of several bugs.
Currently is the main HL code being cleaned for unnecessary code.

I have made a new map, in hammer so far.
The best way to fix it will be to edit the textures, and remove window grids. When that is done, will i return to the Hueco Mundo map, so it can be working as well.

Team update:
We recently had a long ( 7 hours) meeting about BZS and design sheets.
It went really good, and a lot have been decided.
Thereby features and various details about the gameplay.
We will update you with the details as they get implemented in the game.

For moddb, the mod page have changed owner to the development group. (with some help from the moddb staff :D )
SO now we can keep you updated again.

Currently we are few in the team, so if there are some who are determined about modding for us, then are you very welcome to contact us at the forum

You got an NNK animator on your team. Might just be the boost this mod needs, and just when I had lost all faith in Bleach mods in general.

Our team is small, but we are all determined to make it. That is what makes it possible :D
You can be yet so many on a team, but if the team isn't determined, they can't make it.

Pretty much everyone in ESF and NNK are friends, they just help each other out when they got spare time ;D

0.0 you are determined to make it? =DDD GOOD, LESS TO WAIT, i really hope this will be the first bleach mod to come out on HL engine and i wish best luck too!!!! Please make this in 1 year XD! (My favorite Anime's Bleach!! ! X.x!)

Just to let you guys know that was a crappy rushed render I did. I just wanted to show Robo and Eliasr the rigged model. :)

Also for the clever ones, you'll notice something cool that can be seen on the face!

Maybe you'll be able to get few guys from ESF or NNK to work on this one? We all love those animes and I think everyone would love you guys even more for helping them out. ; )

I dont know bleach but I guess you mean the white part (mask?) ?

I don't think so. Grimmjow always had his mask on (every Arrankar has a mask). I think it's the 'smile'. He only smiled when he could fight Ichigo (the blonde dude) in a clear one on one fight. : )