In which the combat prototype is released; bug-fixing and touching-up continues; a climbable tree is bared; the prologue lift is almost done; and some tweaks and changes are made to traversal.

This week's screenshot shows a touch-up to level one: the baring of its climbable tree. 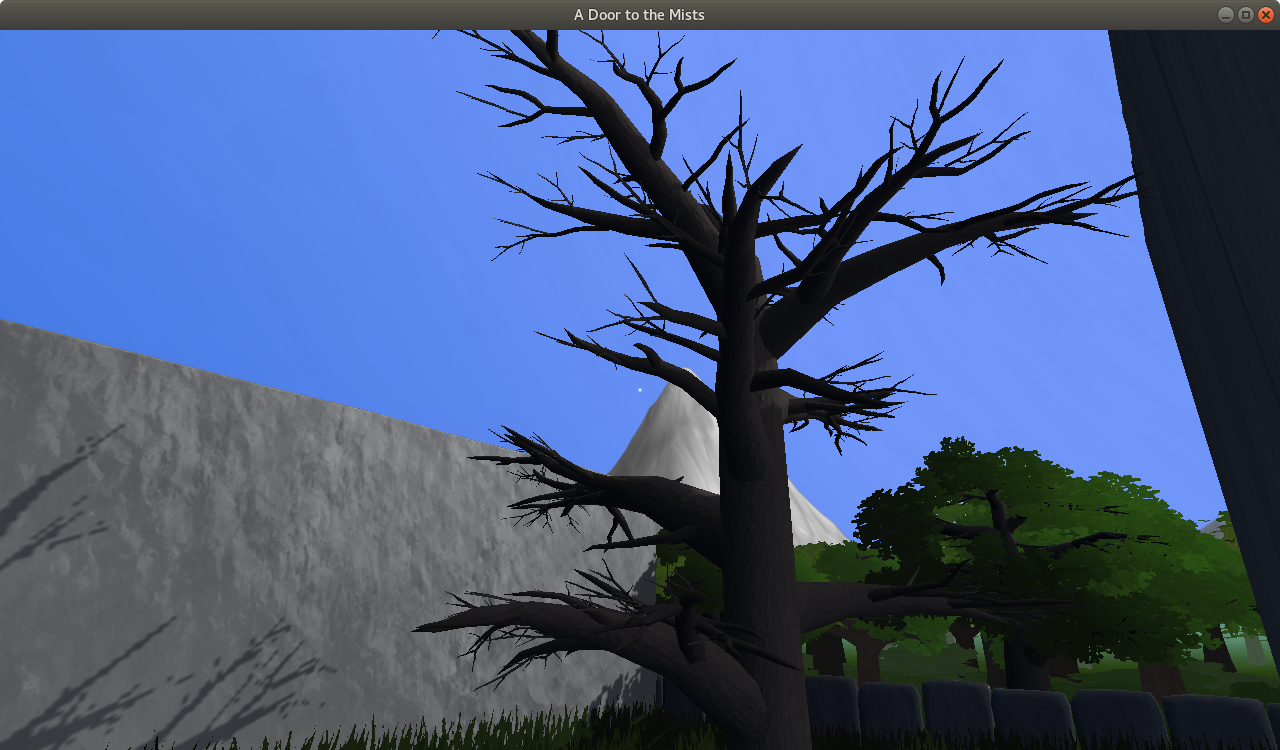 The week just past was somewhat split; it started with further work on the combat prototype, and then moved into tweaks and fixes in response to demo-feedback:

To start with, the combat prototype is now done! Indeed, in the week just past I released it on TIGSource and the Panda3D forum, hoping to get some feedback on the revised combat.

If you'd like to try it out, you should find it here:
TIGSource Forum Thread
(And I'd very much appreciate feedback, I believe, if you have any!)

With that done, I actually took a day (more or less) off--as I recall I was feeling rather drained, between work, sleeping issues, and a cold that hit me somewhat hard during the week just past. And honestly, it was nice to take some time off after releasing the prototype, I think.

Thereafter, then, I moved on to general touching-up and bug-fixing.

To start with, and as shown above, the climbable tree found in level 1 is now bare. I'd had some feedback of people having trouble with this tree, and am hoping that the bare branches will both be easier to see, and thus climb, and be more-obviously something climbable.

I also continued working on the lift found in the prologue.

As I believe that I've mentioned before, I've removed the ropes that were previously used to escape the pyramid in the prologue. In their place, the internal lift now returns the player to the top of the pyramid, then resets to its starting position, ready to be used again if the player desires to re-enter.

I did make once concession to expedience, I'll confess: when the lift returns to the top of the pyramid, the player is locked in place until the journey ends. This means that I don't have to worry about detecting the player leaving the lift, or about resetting it if they do. It's slightly out of character for this game, but a small thing in a single-use object encountered in the prologue level, I feel.

This change isn't quite yet done--I have some tweaks that I still intend to enact.

On the technical side, I made some changes to the game's traversal code.

The largest of these is that the player now slides down slopes, where before they could more or less run along them. That "slope-running" proved unintuitive, I fear. Furthermore, having the slopes of the prologue-pyramid be unnavigable should, I hope, make finding a path to the top a little bit simpler.

The other changes are relatively minor, but should hopefully make for an easier and more-intuitive experience: jumping on a slope no longer propels the player outwards when attempting to jump upslope, and the forward-speed of jumping has been increased slightly.

And finally, I made a number of other bug-fixes and changes that don't seem worth detailing here!