We talk about what the Foxhole dev team is working on including the Colonial Light Tank, Sunken Pillbox, Tunnel Network and more!

After almost a year of thinking about tanks in Foxhole, we can finally say that they are coming in the months ahead. It's taken us a long time to begin serious development on tanks because we had to develop a lot of supporting technology first and because we haven't had a large enough chunk of free time yet to dedicate to it.

Tanks will be a large and comprehensive feature in contrast to the vehicles currently in the game (like the Half-track). Combat mechanics will be fully fleshed out including area specific damage, interchangeable shell types, and multiple roles for crew members. We currently have at least 3 tanks planned per faction, but there's nothing stopping us from adding more in the further future if it makes sense. 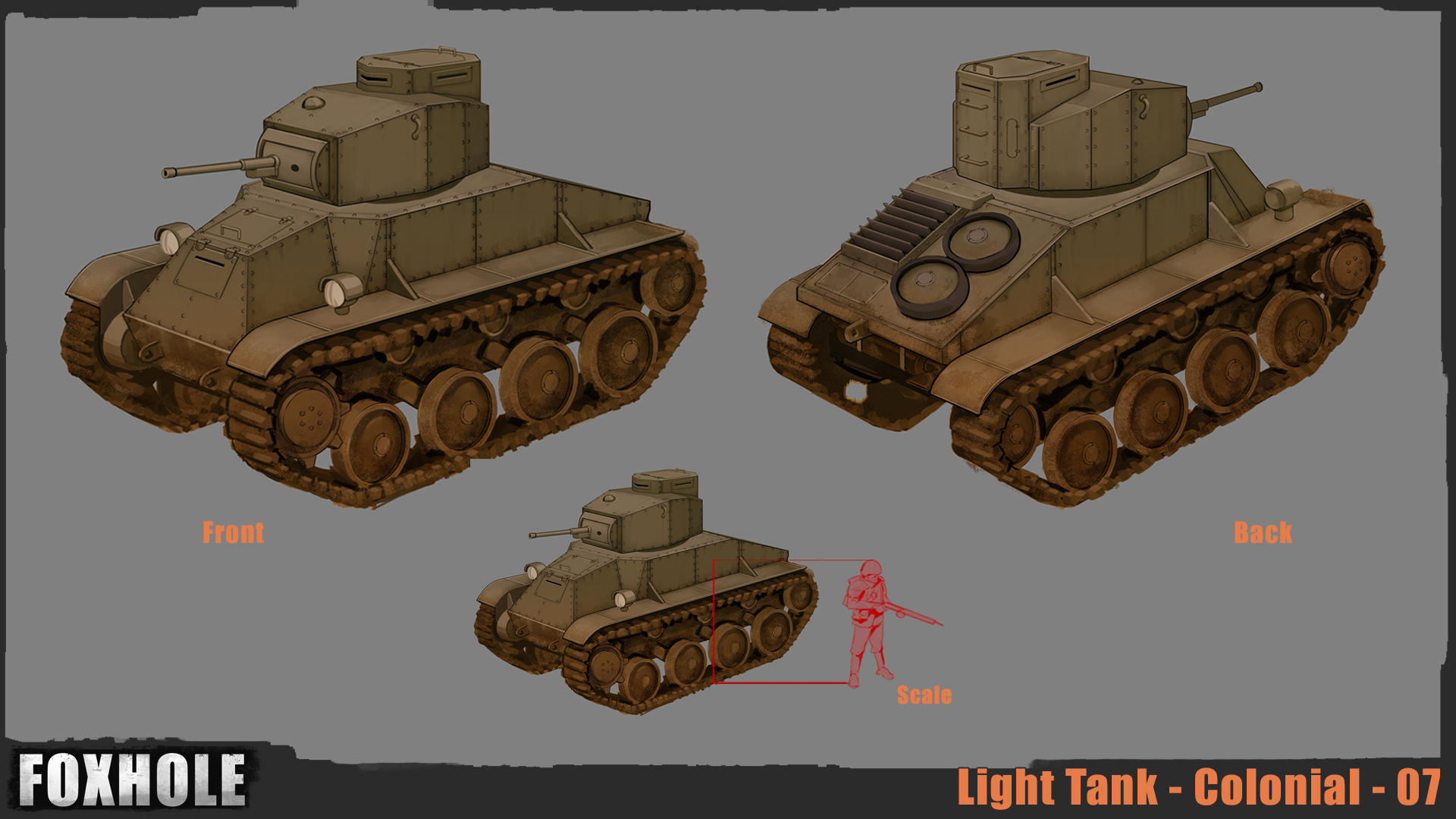 Concepts for the Colonial Light Tank

The first tank to be revealed is the Colonial Light Tank, called the H5 Hatchet. The visual design process for this tank has taken us months of on and off concepting work. We had very specific goals for how tanks should look in Foxhole, and even more parameters for faction specific design elements. 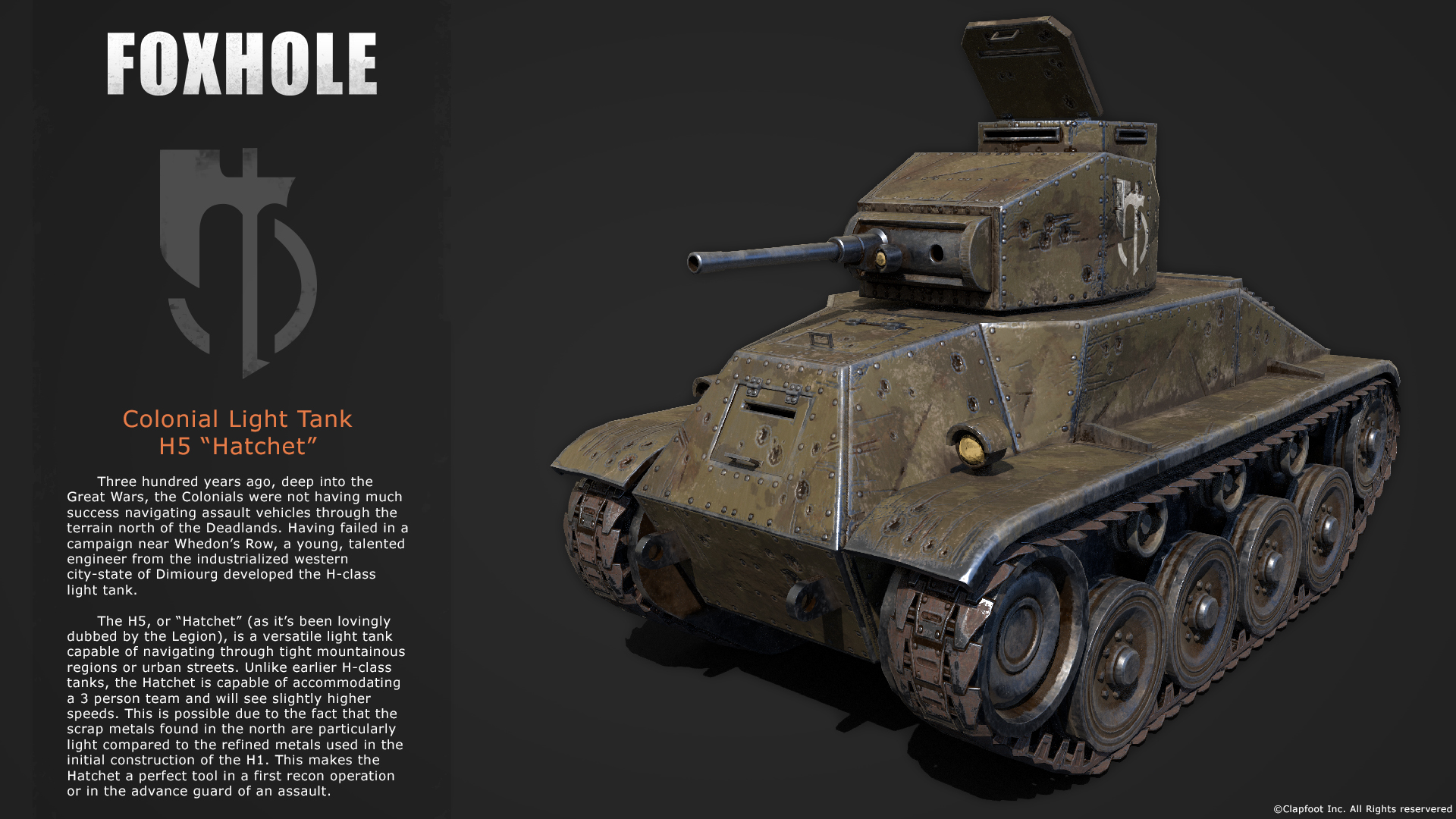 Overall, we wanted tanks to look like they belonged in the early to mid 20th century, but we didn't want them to directly reference any specific tanks from real history. One of our design philosophies was for things to look "slightly out of time", meaning that they should heavily remind you of something from World War 1 and 2, but you can't quite put your finger on exactly what era they're from. When in doubt, we also erred on making things look lower tech and generally aged. 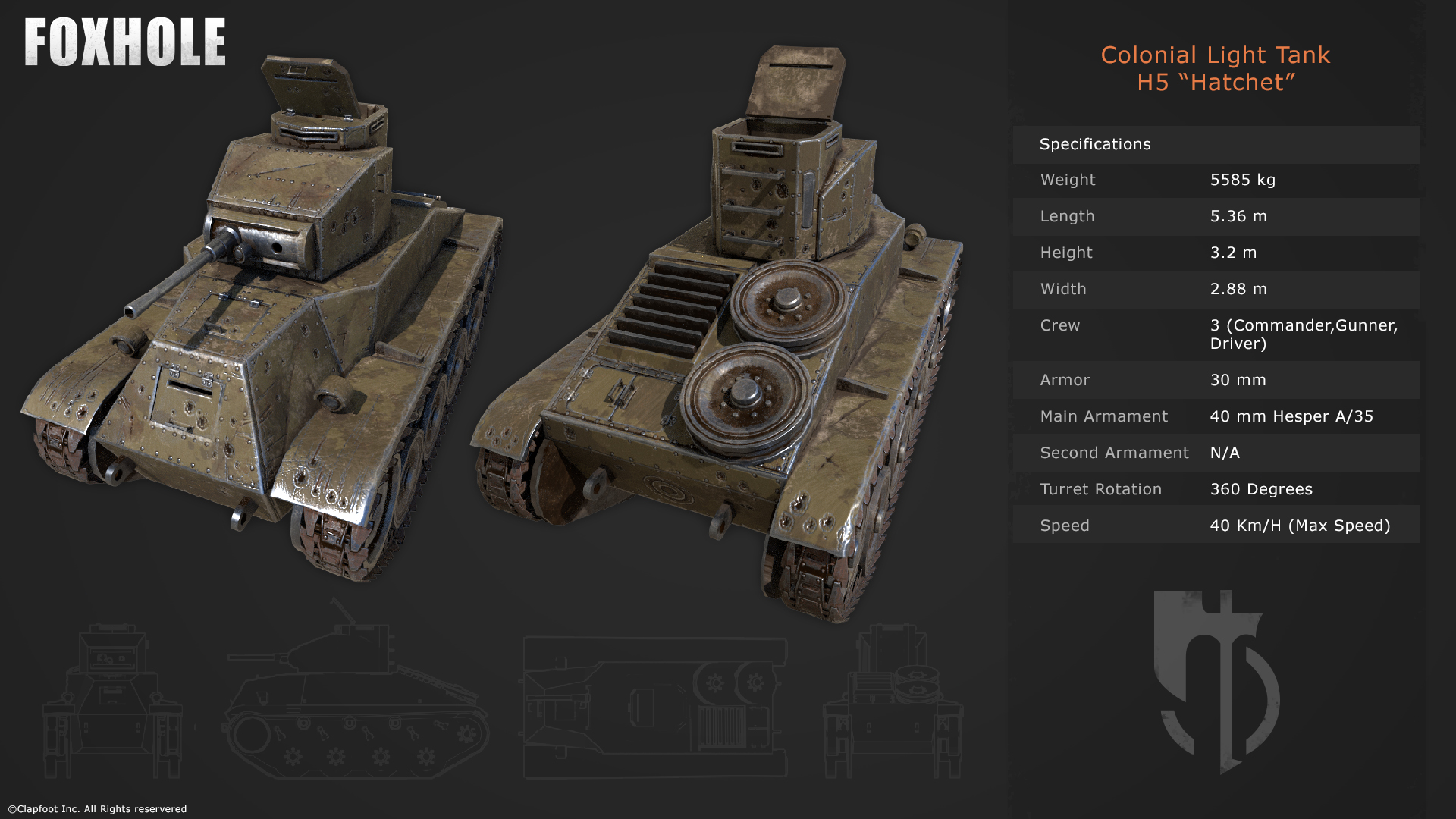 Specifications for the Colonial Light Tank

When it came to designing Colonial tanks, our aim was to make them look utilitarian and durable. They also needed to look like they could be mass produced pretty easily since at one point in the game's history, the Colonial Legion amassed dozens of thousands of these tanks. 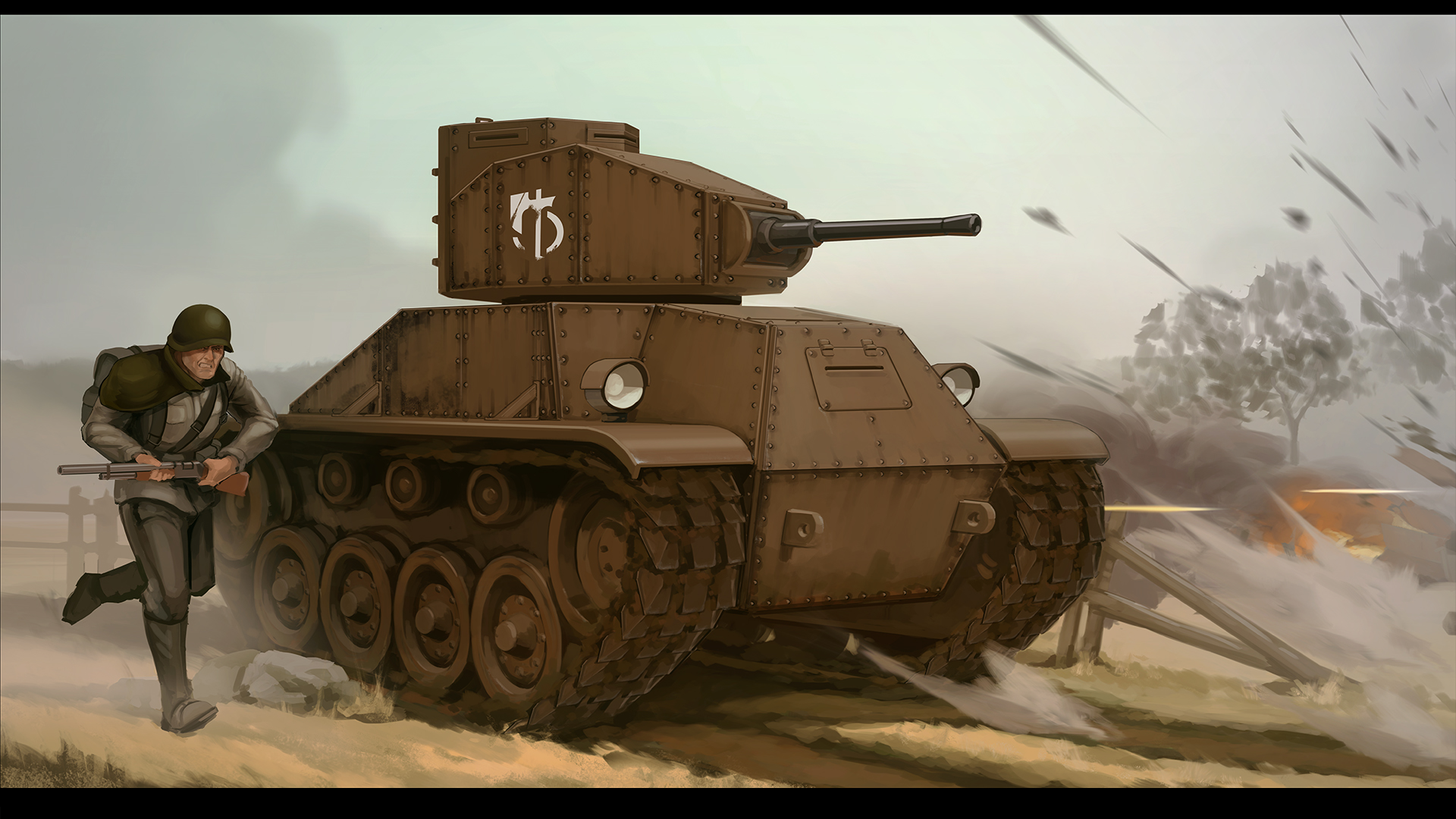 The way that passive defense structures are built and maintained has been a big issue for us internally for a very very long time. They are these powerful sentries that have infinite firing capacity and can be built in any remote location without any support from a supply line or town. This has led to some serious issues including early game Foxhole rushes and other unintended offensive uses for them. In addition, the whole concept has always felt unrealistic or "magical". Where did this AI character come from? How is it being supplied? While we are ultimately making a video game and some concessions have to be made, we always prefer to have mechanics in Foxhole that are grounded in reality.

In our early prototypes, we tried a variety of solutions for passive defenses, including requiring players to manually supply them with ammunition, forcing players to build them close to their bases, and even having players build out an electricity system to power them. We also thought of a really wide range of crazy ideas to address the issue of passive defenses feeling too "magical". One solution even involved players having to ferry troops from bases to Foxholes. We weren't satisfied with any of these solutions, so we've been thinking for a better approach for a long while now.

The Tunnel Network structure will be our solution. Inspired heavily by the vast underground structures built for the Maginot Line in World War 2, players will need to build out networks of tunnels to supply their passive defense structures like Pillboxes and Foxholes. This sounds like a very complex mechanic, but at the abstract level this will work similar to how Pylons work in Starcraft. Players will build Tunnel Network structures in the form of concrete hatches, which will automatically connect to nearby structures. Networks must be connected to Town Halls or Outposts to work. Only connected passive defenses will have an active AI. 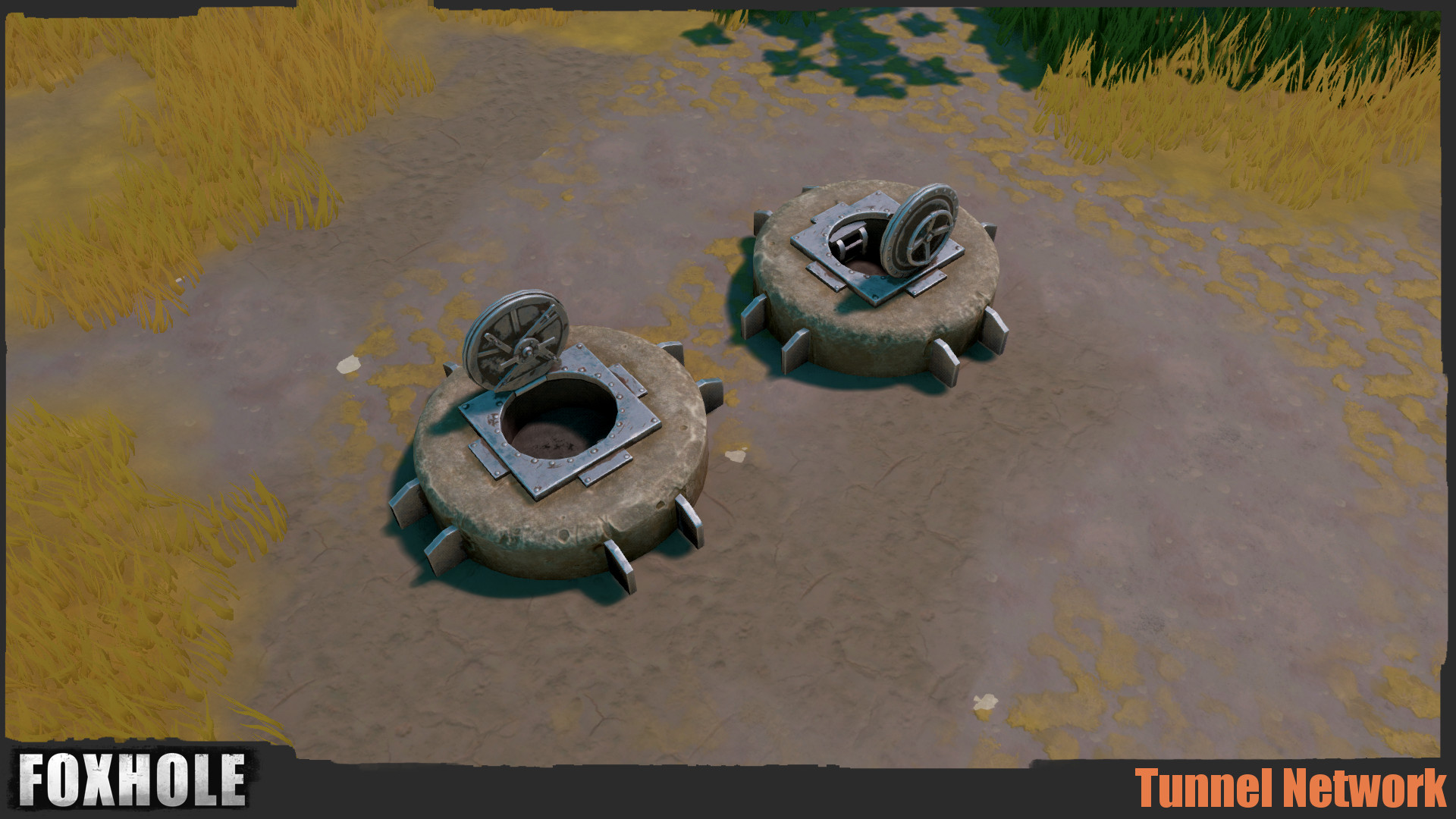 Our goal is for tunnel networks to stem remote structure spamming in an organic way and require players to more carefully consider the layouts of their forward bases when going on the offense. Hopefully this will result in more clear front lines forming during wars as well, instead of the patchwork distribution of structures between factions that we see today. We also like the idea of Tunnel Networks because the concept feels appropriate for our world and grounded in reality. One can at least imagine now that passive defenses are manned by AI characters that have traveled underground from a base to the structure.

When discussing this concept internally, there was a lot of excitement surrounding the idea of allowing players to actually enter the tunnels and safely travel underground to other locations. This is something we may take a closer look at in the future.

We said in the past we wanted to limit the number of resource types in the game and our goal was avoid Minecraft style mechanics for gathering, crafting, and building. Nothing has changed with this, but recently we've felt that only having two resources in such a complex game limits the number of levers we have for balancing progression and pacing. We are going to be adding a fourth resource in the game, Sulfur, to give us more flexibility when balancing certain weapons. 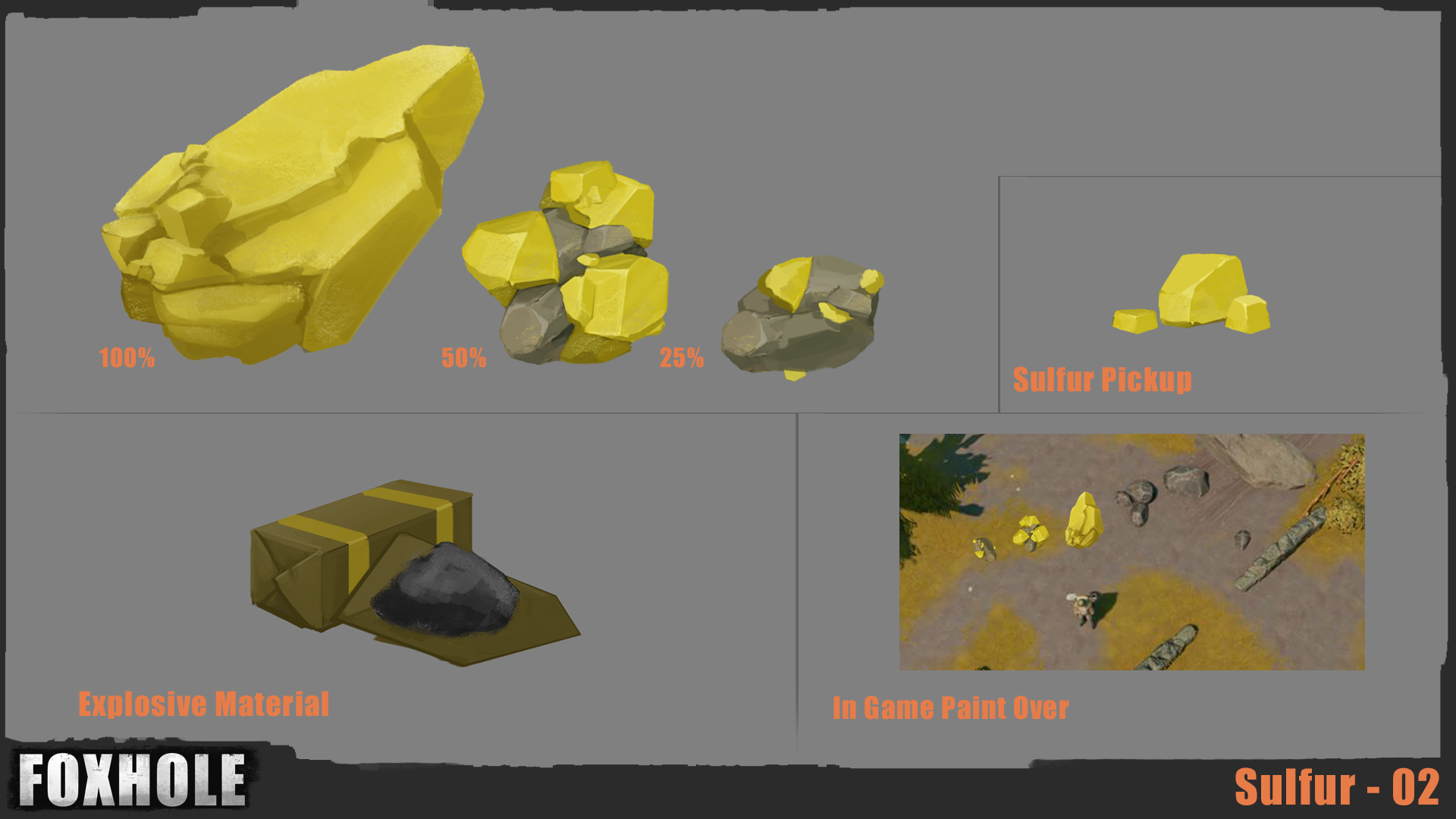 Sulfur will be depletable, meaning it will actually run out and not regenerate for long periods of time. Also, this resource will be available in contested areas away from towns. Players will initially gather Sulfur in relatively secure areas, but once those nearby nodes are depleted they will have to venture out to the front line or beyond for more. Sulfur will be refined into Explosive Material at the Manufacturing Plant.

This new resource will allow us to gate the usage of the most powerful weapons in the game without nerfing their abilities or making them a grind to achieve. As it is now, players can continuously produce the most powerful weapons in the game so long as they are willing to embrace the grind. Once the proper production pipeline is setup, an attack with these high end weapons can theoretically be never ending, making it difficult for a defender to catch a break and counter. Having Sulfur in the game will help us even more in this regard once we introduce higher end content like tanks or other forms of artillery.

We are going to be adding a new passive defense structure called the Sunken Pillbox to assist with defending towns from long ranged weapons. Inspired by the Retractable Turrets used in the Maginot Line, this structure will retract into the ground when there aren't any targets in sight. When enemies are inside it's forward facing firing arc, it will slowly rise and open fire. In it's retracted state, the Sunken Pillbox will be near invulnerable. 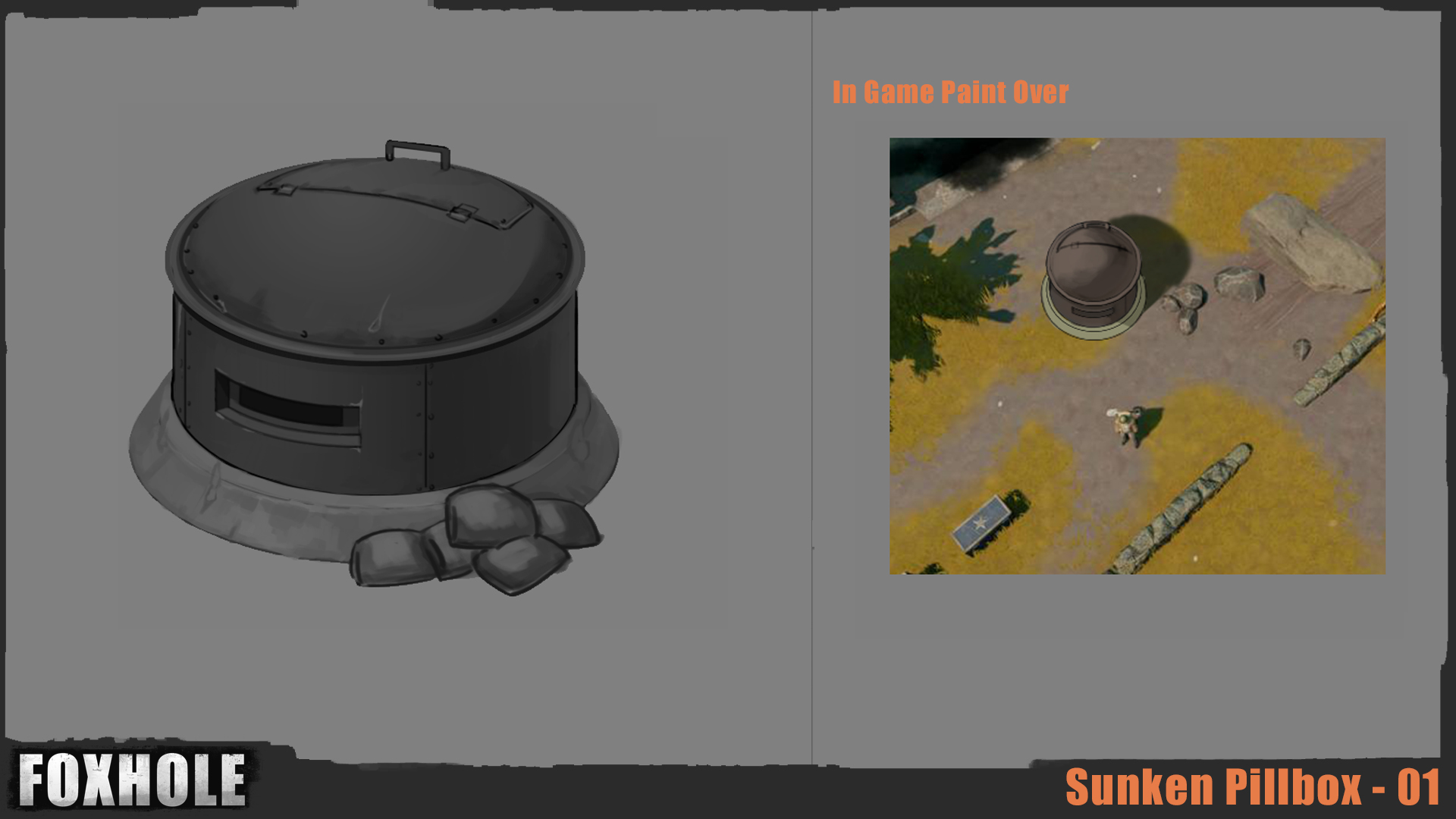 The Sunken Pillbox was designed to help players secure their towns against long ranged weapons used by small groups of raiders or during low population situations. However, it's slow startup time makes it essential to complement it with other defensive structures.

In the coming updates, there are even more changes we are considering to help balance out the pace of wars and eliminate some of the "cheaper" tactics used in the game today:

1. Passive defenses will be hidden by line of sight

In a continuing effort to help players better defend their towns, we hiding structures like Foxholes with line of sight. This will make it harder for attackers to snipe structures using long ranged weapons. Structures will stay visible to a player once they are spotted until that player walks far away. Besides being more realistic, we've also always found it highly ridiculous that a player could stand front of a concrete wall with a set of binoculars and get a clear view of what's behind the wall.

We've always intended for large structures like Town Halls and Outposts to take a certain amount of time to build, but this can be easily circumvented by having a large number of concurrent players use their hammers on a one build site. We will be limiting this so that only 3 players can work on a build site at a time without diminishing returns.

We talked about this in our last Devblog and we're still considering it. Now that Tunnel Networks are revealed, we can discuss a more viable way of achieving this mechanic: Supplies are stockpiled at Town Halls and Outposts, and are delivered automatically to passive defenses through the network.