This news announces the cooperation between the Back2Fronts mod and the WCP mod. There is also some other info - recently created stuff, development notes, etc.

Hi all!
That's right Wicopp (author of the legendary WCP mod) is back! He offered his help to the Back2Fronts mod. We helped each other in past so it was a pleasure to join our efforts and continue. 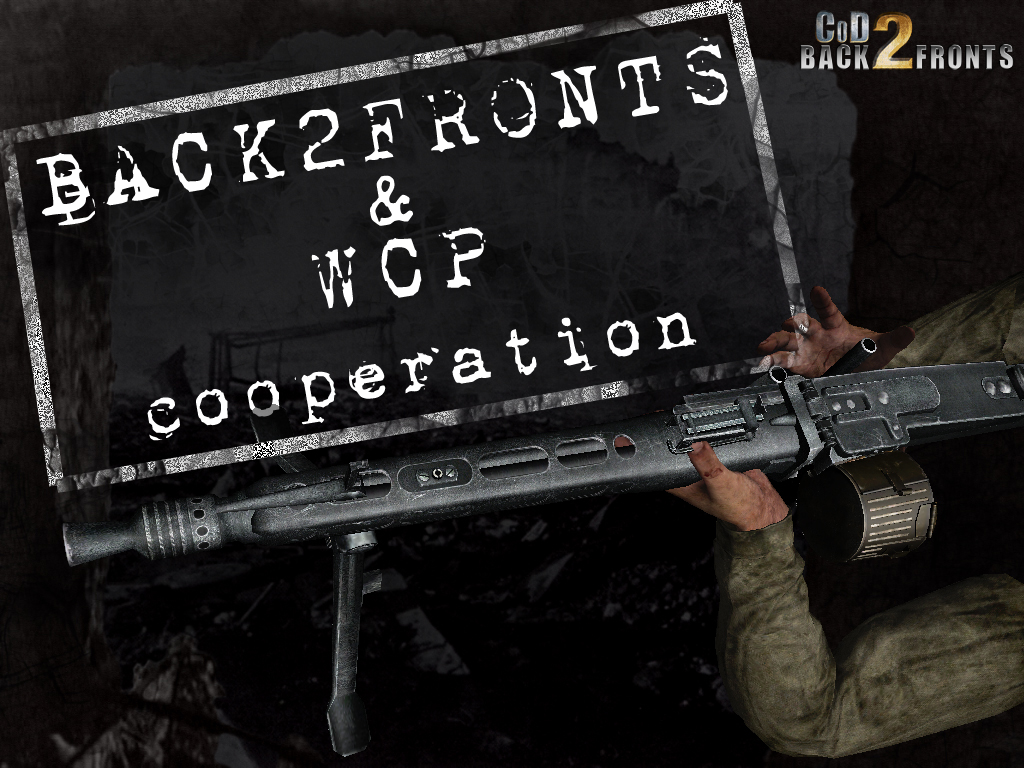 The cooperation started circa a month ago. We both share very similar attitude in modding so the work goes smoothly forward. Since Wicopp is much better scripter than me he took this role and works on many improvements.

All these maps will be present in the mission select menus for easy accsess and built into the default CoD2 campaign gameplay flow. All maps are moddified, sometimes to add detail or change something, sometimes because of historical accuracy and also sometimes to correct known bugs and enable B2F compatibility.

Wicopp works also on other script related things but I won't reveal them for you now because it's supposed to be a surprise. But I can say that some of them were in his WCP2.91 and some of them are new. You will be informed after the works on these are completed.

A good news for you guys that the potential full release is closing in. Here is the list of top things that has to be finished in order to release the first full version of the mod:

Slightly off-topic info - I have to submit my Master's Degree Thesis in a 3weeks period. So in the incoming 3 weeks I won't have much time for modding.

Custom stuff info:
I probably didn't say that in any of my previous news posts so I am gonna make it clear now. There are 2 types of models in Back2Fronts from development point of view:

That had to be done because of compatibility and performance reasons. CoD2 engine has a certain limit for number of custom models, textures and materials. I decided to stick with the default layouts as much as possible to save the space for totally new custom things that were not in original CoD2. I hope you guys understand that.

Now some info of already completed work:
Portable MG42
The whole MG42 model was totally overhauled. The most detailed model version has 5864 polygons (compare with 1297 polygons of the original CoD2 MG42). The model was created using advantage of my older MG42 models and references from MOHAA, CoDWaW, CoD1 and unused CoD2 MG42 models for 1st person. I naturally made LODs to save memory.
Anims were created from my MG34 anims. MG42 can't use the same anims because it has slightly different shape and topology compared to the MG34 (especially the sights, barrel and bolt handle). Reload empty and partial reload both included like on the MG34.
MG42 is lighter and faster than MG34, it also has incredible firepower (1200RPM). Although the recoil is big you don't have to aim much thanks to the incredible rate of fire. The only disadvantage with this gun is that it doesn't have semi auto mode, accuracy is worse than on MG34 and it eats ammo very quickly.

Bayonet anim for M1 Garand
Since each bayoneted weapon must have its own bayonet anim I created one for M1 Garand based on the anim from CoDWaW. The new anim is shorter set for CoD2 melee standard and less camera shaking.

M2 Carbine
Along with the M1 Carbine remodel the M2 was made as well. The paratrooper M1A1 might be created as well in future.

Thermite grenade
Thermite grenade is encountered only in some scripted moments so I decided to change that and make a regular pickable grenade from it. Only American troops are equipped with these.

Awesome!
All this progress is great, I can't wait for this to be done!

I am really looking forward to this new stuff...
Hope you do well with your thesis...

Thanks for the good luck wish. I am gonna need it :)

Good luck with the stuff you have to do, I have some graduation stuff based on vehicles as well in the next three weeks.

when realised the full mod, i can't wait

I am impressed with this mod. What is the map "Day of Infamy"? Will it be included in B2F mod? I hope so. Good luck!

Yes, but probably not into the first full release because it will require reanimation of all bolt-action weapons.

Yes, they must be reloaded one by one and not with a stripper clip.

the detail is so addicting!

It would be a nice addition :) Just needs a bit of reskinning and it's ready.

Any approximation of the Release Date for the full mod? :)

All models that are in Back2Fronts were created either by me or by someone from Back2Fronts modteam.
So this means that we will do our own Carcano model.

Niceeeee! :D
Any posibility of an SKS rifle for USSR, maybe just in MP part of game?

SKS was cancelled - no usage for it in mod.

Understandable. It was produced near the end of the European Theater of war, and probably not used by Red Army until after WWII. :)

Actually, it was tested in combat in early 1945, near the end of ww2

Yeah they were tested. They were even on the Russian parade after conquering Berlin.
But cod2 doesn't contain any 1945 maps at Russian front. So again - no use in the mod.

Mmhmm. Okay, thx for the info.

Keep up the good work and I hope we all get to play this mod soon :)

Did you guys change the loading screens for those custom maps?

Any news on the status of this mod?

Anything new regarding this mod, I'd really love to see it in action :)

take all the time you need, man. Everyone has priorities. Take time with reality, don't worry, we will all be here when you're ready. :)

Great. just great once again.
I'll possibly write a review about the v1.0 of the mod soon.