In lieu of posting the full change log since the last public release as I usually do I have chosen to post a general overview of the mod as a whole as it currently stands, not least of all because the change log since 0.4.4 is around 500 lines long and spans a time frame of almost 2 years. This part is the overview of Cybran units added to the game.

In lieu of posting the full change log since the last public release as I usually do I have chosen to post a general overview of the mod as a whole as it currently stands, not least of all because the change log since 0.4.4 is around 500 lines long and spans a time frame of almost 2 years. And includes many features that were added and changed and in some cases removed within that time frame, and no one really wants to hear of the toys they almost got to play with before they got pulled, or how overpowered the new turrets were in the state they existed in between public releases.

So to that end I will start with a full list of the added units, and a little bit of text for them. Starting with: 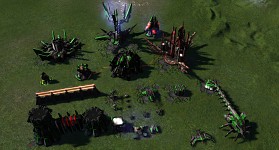 Always the original developer favorite; Cybran. In BrewLAN the Cybrans receive 27 new units total. 3 of which with totally unique models. That is to say, models not using parts or elements from other pre-existing units for the sake of shortcuts in development time; if I were making all wholly new models for all units this release might have happened in about a decades time rather than now. BrewLAN is a dev team of one after all; the only thing I didn't do was the translations. But back on subject, the aforementioned units are the Zenith, the Bulkhead, and the Slink.

Since most of the roles I created units to fill were already occupied for Cybran, they only get 4 units:

Outy: Tech 1 Field Engineer
Fairly simple one to begin with; the Cybran field engineer. It can build defenses and the tech 1 pressure mines.

Little Bertha: Tech 1 Light Artillery Installation
The tech 1 artillery are some of the most expensive tech 1 units, being about half everything of their tech 2 equivalents.

Mutter: Tech 1 Pressure Mine
The smallest of the mines. Has a damage radius of 1, and deals 900 damage. Has no visual radius, and is technically triggered by its 1 radius Omni, because a pressure mine wouldn't detonate to a jammer signal, and a cloaked unit still has weight. They don't block pathing, so building them in click dragged lines is a legitimate strategy. Although I advise diagonal lines because then they are just about out of eachothers damage radius. Buildable only by the field engineers. When built in the water they sit on the seabed, and they are only visible to omni.

Ravilailler: Tech 1 Light Air Staging Facility
Small air staging facility. Can only handle one aircraft at a time. This can be a tech 3 aircraft, which is fine if you only want to refuel, but if you want repairs that might take a while.

Wilson: Tech 2 Field Engineer
This one has some story behind it, but I will keep it short. Anyone who's ever read the second paragraph of the BrewLAN summary will recognise the name Wilson. The guy loved his walls, what can I say. He's the reason why BrewLAN has walls in the first place, why Cybran were the first to get all their walls, and the reason why all the good walls require field engineers to make.

Tech 2 Energy Storage
The cost and effect differences between tech 1 and tech 2 storages is the same as it is between the power generators of said levels. It holds 50000 energy. They have a unique twist on the 'Volatile' warning keyword ability: The explosion size is proportional to your energy stored as a percentage. So a bomber getting through because you can't power your shields isn't going to cause a cascade, but one punching through your shields is going to cause a mess. They have double the effect on power generators as their tech 1 counterparts (4 times if you don't account for the size difference).

Tech 2 Mass Storage
These store 12500 mass. They have a bonus effect on tech 3 fabricators due to their awkward relative sizes, other than that they are wholly unremarkable except for the massive storage space they allow.

Whisper: Tech 2 Proximity Mine
These bad boys deal 4500 damage in with a radius of 5. As with all mines they have no vision, don't block unit pathing, and are visible only to omni. The tech 2 mines are triggered by radar or sonar, of which they have their own at range 4, and float near the surface if built in the water.

Bulkhead: Tech 2 Heavy Wall Section
These have totally nothing to do with NOD, and are no way some kind of mashup of the walls and fences NOD get on Tiberian Sun. On a serious note, the lasers have no gameplay effect, except to strike fear into the hearts of the enemy. They visually join to other heavy walls via a massacred version of the adjacency bonus script, so they will update whenever something is built next to them if they are behaving weird. If they are built diagonally they may look like they have gaps all over the place, but they will still block pathing (Except for most experimental units, which don't care).

House: Tech 3 Field Engineer
House to the Wilson. Named as a decoy reference for the Wilson. It has the capability to build the following things that regular engineers cannot: the tech 3 cloakable resource buildings, the armored wall and gate sections, the anti-armor point defense, and the nuclear mine.

Slink: Tech 3 Mobile Missile Launcher
The Slink has several unique features: It has personal cloak and stealth, although its cloak disables when it fires; and its weapon is uniquely able to fire upon aircraft and land units alike. Its model and texture are unfinished.

Hedgehog: Tech 3 Mobile Strategic Missile Defense
Unfortunately for the Hedgehog, I ran out of time before my self imposed deadline and never got chance to give it a model in any way different to the Viper. So its a large Viper with an anti-nuke missile.

Night Skimmer: Tech 3 Heavy Air Transport
The Night Skimmer is a fairly standard affair, it can carry four tech 3 units, and has a stealth field. It is the cheapest of the tech 3 air transports, costing 95% of the Continental.

Tech 3 Cloakable Mass Extractor
Its an extractor with free cloak and stealth, and more health. You may just get away with it.

Tech 3 Cloakable Mass Fabricator
Cloakable mass fabricator; it produces 75% of a standard fabricator, with the same power consumption while the cloak is active. It comes with 50% increased health, and a 33% lower explosion radius, so is less likely to cause or take part in a cascade. It doesn't have a tarmac, so there are less visible signs of its existence.

Tech 3 Cloakable Power Generator
The cloakable power generator nets a 1000 power while cloaked, and 1875 without. It has 50% higher health, and 33% lower explosion radius of its counterpart.

Silencer: Tech 3 Nuclear Mine
These are full yield warheads. Manual detonation only. They have radar and sonar, and are visible only to omni.

Hades: Tech 3 Heavy Point Defense
The Hades features a long range microwave laser. The power consumption steadily increases by 10 power a second as it maintains fire, and decreases by 30 per second it is inactive. If it fires for long enough for its consumption to reach 1000 it will overheat and wont fire again until it has dropped to below 500. This is however a very rare occurrence, as it can deal nearly a third of a million damage in this time. Although, it should be noted that this drain can cripple an economy not powered by tech 3 generators.

Punisher: Tech 3 Anti-Armor Point Defense
The anti-armor point defenses are only buildable by field engineers and fill a similar role to that of the tech 2 artillery; long range, and high damage, with a high power consumption per shot. They are too big to be buildable on walls.

Procyon Defiance: Tech 3 Armored Wall Section
Very heavy wall sections. They have 40000 health per segment and can support defenses on top of them, which are build like a factory would build a unit. It has the lowest build rate that can still be assisted, meaning it can build its own defenses, but without assistance it is likely to take about half an hour.

Procyon Defiance: Tech 3 Armored Wall Section
This version can only be built on top of the standard armored wall section, and cannot build on its own.

Procyon Offering: Tech 3 Armored Gate Section
The armored gate section costs less mass but more energy than the wall section. It requires manual control to open and close, and it passes its orders to open and close to adjacent gate sections. They occasionally don't work if you are selecting more than one connected gate section; so get used to only giving the open/close orders to single units of each gate.

Nightshade: Tech 3 Cloakable Stealth Field Generator
This is a stealth field generator, with a personal cloak. It has a higher maintenance cost than the tech 2, and a lower radius. Its main designed purpose was as a way to be able to create full cloaked and stealthed, if massively inefficient and expensive farms.

Iron Curtain: Experimental Shield Generator
The Iron Curtain is a large shield. It costs similar to a Monkeylord, and can take a massive beating, although it has one of the lowest regeneration rates of any of the static shields.

Scathis Mark II: Experimental Rapid-Fire Artillery
This is basically the regular Scathis, except its a building. It can get adjacency bonuses which can allow it to nearly double its rate of fire with four tech 3 reactors around it.

Darkness: Experimental Omni Disrupter
The Darkness creates a pulse that, while active, will slowly decrease the omni radius of all omni sensors within its radius down to a minimum of 50. The only vanilla units with an omni of greater than 50 are the tech 3 radars, no other default units are actually affected. The pulse costs 10000 energy a second. It uses the model of the QAI mainframe from the campaign.

Thanks for this, I use multiple mods so figuring out which one added what can be hard this helps alot :D.

Also I noticed a typo or two while reading, I'll post them and let you see if you want to fix them they are minor tho.

Wilson: Tech 2 Field Engineer
This one has some story behind it, but I will keep it short. Anyone who's ever read the second paragraph of the BrewLAN summary will recognise the name Wilson. They guy loved his walls, what can I say. He's the reason why BrewLAN walls in the first place, why Cybran were the first to get all their walls, and the reason why all the good walls require field engineers to make.

("They guy loved his walls" wild guess you mean "this" haha, I almost didn't see that my mind auto corrects I guess.)

The Procyon Offering: Tech 3 Armored Gate Section
The armored gate section costs less mass but less energy than the wall section. ( "but less energy" should the "but" be there? I figured a "and" or possibly "also" maybe?)

Tech 2 Mass Storage
These store 12500 mass. They have a bonus effect on tech 3 fabricators due to their awkward relative sizes, other than that they are wholly unremarkable except for the massive storage space the allow.

please don't think i'm picking at your effort here its a huge ammount of work that's clear to see just pointing out a few little things to help refine it :).