Pretty cool guy, doesn't afraid of deadlines. Plays Warframe instead finishing BrewLAN and getting all the girls.

In the course of the development for the next BrewLAN update I have come across an interesting point in the games balance. Mostly regarding the Restorer, the Aeon tech 3 AA gunship. After the balancing I gave it a while back it ended up a being a bit redundant for what it was actually useful for. But for this next version I've been experimenting with fixing that.

So I started with pushing random numbers into it and seeing what came out in game. The first number I tried was setting its AA damage to 200, just under 3 times its base damage. I then proceeded to test this in game against equivalent forces. The first test was 10 restorers against 40 air superiority fighters, a mass for mass resource equivalent. The result: the ASF's won with 32-28 left. I then tried 10 Restorers against 14 ASF's, an energy for energy equivalent, which resulted in 9 surviving Restorers at the end. The final, and most interesting test, was 10 Restorers against 22 ASF's, the production time equivalent. In this test the end result was nearly always that 3 of the Restorers survive.

I then tried the test again but with the AA damage of the Restorers set to 199, one less than before. This was were the interesting results came out. Although not for the mass for mass and energy for energy tests. In the time for time test, with Cybran, Aeon or Seraphim air superiorities the outcome was also the same. But with UEF ASF's a completely different outcome came about. The ASF's won with 4 survivors. Presumably Aeon players would argue for that extra 1 damage to stay, but I thought this raised more interesting questions about the balancing of the ASF's themselves. They all cost the same, have the same range, the same speed, and almost the same damage, with the amount of health the possess being the only real comparable difference. So what bonuses do all the other races I hear you ask? Well, the Aeon and Seraphim ASF's get an entire 5 extra damage, to go with the 400 they already have which didn't help them in this fight. The Cybran Superiority gets radar stealth to make up for having the least health of the 4 and did that help? Actually I need to test that still. BRB. 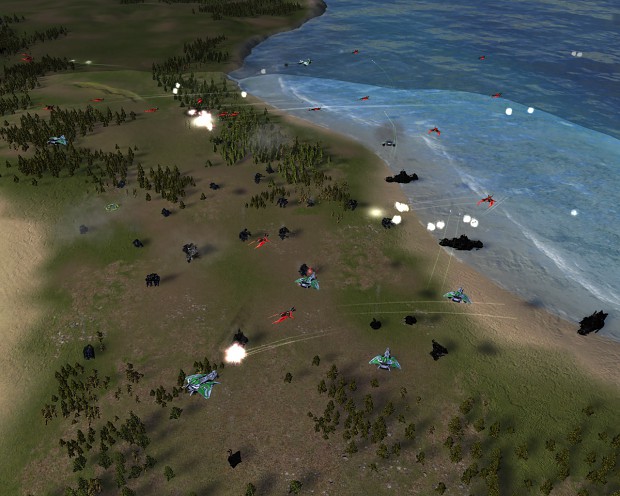 Nope, didn't help them here. Not noticeably in the outcome anyway. So what does that mean for balance? Its a pain in the arse. That's what.

A group for the people of The United Kingdom on ModDB. Jolly good isn't it?

Balthassar hello, this is a very cool thing. I got a lot of enjoyable moments using this interesting mod in FAF.

Please send little attention. For my idea, in forum requests section.
Huge thanks, in advance.

how do i make a mod folder ?

ou can create a dragon for cybran please :
in this sytle Youtube.com
please

i think Baltha★ is pretty cool guy, eh corrupts the universe with waterlegs and doesn't afraid of anything.

actuly it says Hidden in gray letters, but stil lthank you i iwll email you soon.

Kudos to you for making such a awesome Supreme Commander Mod. Can you give me a link, where I can download some maps for Supcom FA ?

Many thanks in advance

Thanks. There is a thread on the GPG forums with lots of good custom FA maps.
Have a link: Forums.gaspowered.com