New Update explain what has happened within the last 6 months and what is up. Shows off some maps and the redesigned glock model.

Ok so a lot of things have happened after 6 months of no news. It gets a little worrisome of people thinking something is dead. We assure you we are not dead, rather the opposite we never have stopped working. We have been talking about what to change and what to keep as close to the original as possible? What should the player have more control over and what to let the game decide? So let's get on with the update.

Overview
So we have gotten a name change to Hazard Team, when you think about it, it's much better. Half Life: Decay was originally going to be called Hazard Team but they later changed it to better fit with the other games. So we decided to use Hazard Team as a sort of nod to Gearbox.
So without an update for six months lead to a misunderstanding if we were dead or not, causing another mod to pop up also working on a Half Life: Decay mod. After talk, we joined forces to create a fun experience for the play.

Models
The models have been reworked to better fit the source engine and old media has been taken down. The Glock has been completely remade in its new sleeker look. 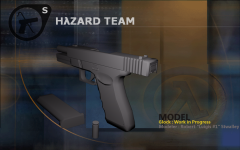 Maps
Here are some shots of one of our levels. Our mappers have been hard at work to supply a fun experience for the players when they play Hazard Team. We have decided to give the player more freedom in some parts of the game. 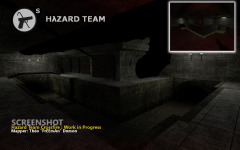 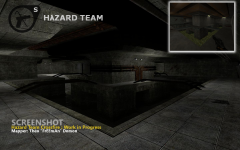 There are openings in the spots of:
· Modeler
· Texture Artists
· Concept Artists
· Mappers
· Coders
Send in some samples of your work and contact information to Hazardteammod@yahoo.com
Comments

Finaly i can play Decay as a mod, i never got a PS to play it

There was a thirdparty port for GoldSrc PC you know...

you can find it here

I haven't played Decay in ages. Giving this a run through today. Can't wait for your guys' Source port! :)

****... Yes! I've never had the time nor skill to recreate it (I already tried, but failed miserably) so thank you very much for the update.

You know, you're on an english speaking site, at least use google translate. I wouldn't go on Pripyat.com and post something in english there.

For those of you who are too lazy to translate :P
"You should use google translate because it is mainly English-speaking place."

Awesome! I was waiting for an update from you guys!

It was just a little update, we'll post some new stuff soon guys ;).

How many developers are the ones who are doing this mod?

Keep up the good work =)