First ever NCF Configuration Utility allow you to add/remove creatures easily, make custom packs or just add some of your own! News on future plans and development.

I am very happy to introduce you to the NCF Utility!

With current release it is now possible to setup the NCF addon for Heroes of Might and Magic V with just a few easy clicks. Select the monsters you want to add to the game and hop right into the action. 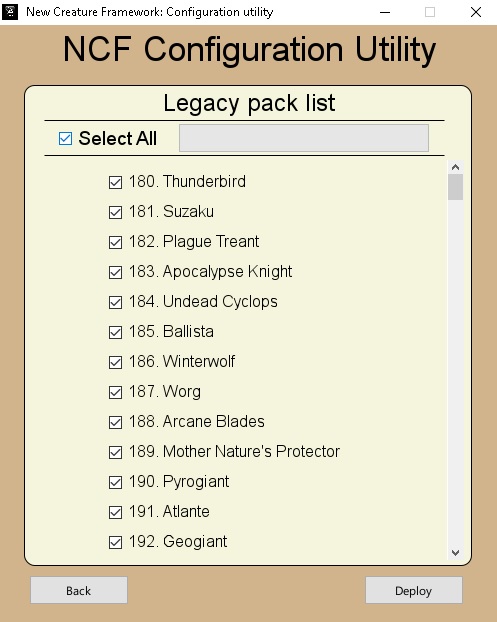 Note: Have in mind that different packs will not be compatible and each time new NCF creatures are deployed the utility will purge any currently existing NCF creatures.

As this is an Alpha release all required functionality is available but can be subjected to change in the upcoming releases. The aim of the project is to provide the user with friendly and easy to use interface (probably not the most beautiful one though...). For anyone interested the project is open source and can be found here on gitub.

To fill maps with new creatures go to /bin directory and find the editor.exe that has NCF in the name. Open it and add NCF creatures on the map manually.

If you are playing the Might & Magic: Heroes 5.5 mod you can use the mapmixer utility to auto-generate NCF creatures on already existing maps.

As this is the first ever release in more than 5 years changes are kept to minimum. Currently only "Legacy pack" is available, which is what most people refer to as "NCF MegaPack bundle". The pack is meant for history purposes, there will be no follow up updates for it so no new creatures are added to the pack (or removed) but there are a couple of fixes that were done including:

In the near future you can expect 2 new packs:

The new "NCF pack" system allows anyone who wants to make new creatures to create his own pack or add them to already existing ones. There will be an article about this in the near future.

Thanks for this. You guys rock!