It has been a while from latest release. We thought that we could release 0.2.0 version in October. As you can see, it didn't happen. We have been developing new content to Lost Dragons after 0.1.0, Walker and large structures to mention couple, and had some issues with Arma's limits. For example before 1.32 update, I had made initialization script that can read configuration and create part by part. This was workaround to Arma's geometry size limit. After 1.32 structure is still created part by part but has geometry issues. More about these scripts in last sections.

Another reason for silence is our day jobs. In last three to four weeks I have done this text and some fixes to major issues in new content. We managed to ship somehow working walker to MANW. MANW version was WIP and was shipped due the deadline. For public release we want to fixes known issues.

We are not long term Arma modders. Our other project, Tiberan Era, was started on Arma II. None of us had done anything to Arma/OFP before that. When Arma III was released, we started porting Tiberian Era for it. Later MANW contest was introduced and we decided to participate. MANW rules didn't allow any third party content (surprise) so we decided to create whole new world. Lost Dragons was created out of nowhere with a decision to do scifi mod with our own design.

Lost Dragons is our vision of good game / mod. When player needs to do something, he / she does it himself / herself (for example hacking). Everything is based on player's skill. Other point of view is team playing. Hackers needs to be protected. Dragon / Warrior needs to be protected. Team must work together to find resources and achieve victory. Events are random: data in folders is randomized and even "real" data can be randomized automatically to provide unique experience for each time playing the mission.

Release is done after we are satisfied with quality of alpha release. To mention some units we have two-legged walker, drones and fighter done. We will provide very early version of main game mode: Treasure hunt. In the first version our factions compete of finding dragon with limited resources. Some words from modellers:

First walker produced with a new approach on walking vehicles. Hybrid combination of class man and class tank provides us with the mobility of man, like hill climbing, crouching, stepping over things and whatever walking unit could do and also the inherited properties of the tank like crushing things under it, turrets, driver/gunner/commander/cargo functions etc. Also as the man is animated with .RTM animations the movement will also look more fluent and can be created quite easily. There are some bugs with the combination and some engine limitations we hope to get around to make the walkers even better. 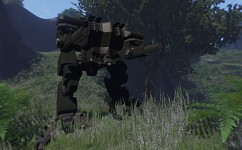 80x80 meters construction built from 4 parts to house the larger than average vehicles we have planned to create. The four parts consist of two front pieces and two rear pieces and the doors on the front pieces are controlled with a new separate control system. 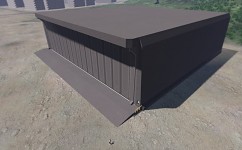 Corporate security drones are now operational on both sides and provide support for the salvagers on site. The plan is to create a large number of drone variations for the corporations. There will be also old and forgotten combat droids that roam the battlefields of New Eden. The corporate droids are supposed to offer certain amount of support with security and and transportation. We aim to balance them so that they are good enough and fun to play with but they are not invulnerable aimbots. The combat droids will be a bit more tougher and skilled to offer some challenge on the field. 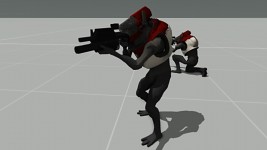 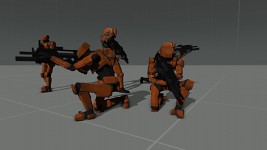 VTOL Helicopter like Gunship with deadly arsenal and excellent maneuverability. Most of our flying vehicles will be VTOL capable and since flying was the main way of transportation on New Eden due to the difficult terrain you can expect quite a few flyers, both military and civilian on the field. The ATF-117 gunship is currently armed with heavy anti armor payload but more variants and dynamic payload system are on the list. 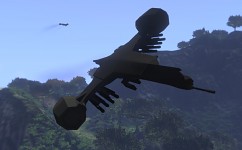 HMG-8 is one of our more imaginative weapons in the mods arsenal and a good example for one that is not that much confined in the scope of reality. Since our concept relies on fictional ideas we will naturally extend that some fictionality on the weapon designs. Some will rely on reality more and others less. 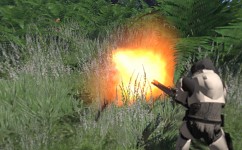 I have made system that reads event handlers from configuration files. Scripts provide way to collect all event handlers of type and run them with object and custom parameters. Initialization mentioned before is using this mechanism. Multi turret and part by part constructions is also using this mechanisms automatically. However this comes with downside. Automatic initialization scripts can conflict with user made modifications to configuration. Basically idea is that mechanism can find all classes that inherit EventHandlers and run them all for object. When inheriting classes, initialization scripts from base classes are also run due Arma configuration inheriting system unless subclass overrides custom initialization. I will provide some simple tutorials with 0.2.0 release.

Our part by part construction is automatic system injected to all structures. On structure initialization part by part script reads configuration and creates related parts. For example our hangars main part contains 3 other hangar parts and terminal. Because init is called by each new part, each part can define it's own dependencies / parts. There will be tutorial for this feature to included in next release.

Hacking is upgraded with "applications". When some hackable object ('data object') is attached to some other object, hacking hud can read applications from other objects configuration and provide applications to "bin" folder. Example in next release is hangar's "doorControl" application. To open or close doors, player must use hacking terminal to execute application.

Multi turret script is updated to use event mechanism and supports CfgCloudlets to produce effects.More details will be in tutorials, readme and changelog (and in-game).

The mech really reminds me of the ancient battle between the Arm and the Core. Nice work, keep it up!

BTW: Perhaps you'd like to include this script in you mod.
ww w.arma holic.co m/p age.ph p?id=26922 (remove the space plz, since guests can't post links :p)
It's an optical camo, makes you invisible (to humans & AIs) for a while, leaving only a blurry figure in the air. Suits the futuristic combat pretty well.
You should ask the original author about that.

Once you have gained the approval from the original author, I have an addon version here (made long time ago for personal use) for your easy implement.
ww w.mediafire.com/down load/421316okgof18ie/Cloak.pbo
Feel free to depbo and make use of it under ARMA GPL licence, as long as you have the approval. (the author gave me permission to redistrubute his script with my addon, but didn't mention if it can be included as a part of another mod)

Some good looking progress, really diggin' the ATF-117 and walker! I'm gonna be looking forward to loadout customization, as well as what possible drone variations may be.

Hopefully the scripting and dealing with Arma 3's limitations don't demand too much hair pulling.* Can't wait to see what goodies the custom hangar may hold down the road.