We celebrate 9 years of Thrawn's Revenge with a dual update, covering both Ascendancy and Imperial Civil War. And a new Let's Play!

Although the mod is nowhere close to resembling what it was in the early days, today marks the 9th anniversary of the creation of Thrawn's Revenge. I originally set out with the sole purpose of adding Thrawn as a playable hero in Empire at War, before Forces of Corruption was even a thing, and the project quickly grew (and sometimes shrank) from there. We on the dev team for both mods would like to thank everyone for their continued support in these last nine years; without it, we'd be nowhere near what we are today.

That being said, I'm sure you're more interested in what's going on with each mod than the fact that if the mod were a person in Canada or the United States (and elsewhere) it would be in the fourth grade, so we're going to do a joint update. If you're only interested in one, just read that part. We won't be offended.

We've made a few changes from the 2.2 announcement; instead of adding the Galactic Civil War scenario, we're focusing on cleaning up and expanding within the current timeline and constraints of the mod. The primary goal is to clean up and finalize the Empire of the Hand and Pentastar Alignment, the latter of which currently relies on outmoded ships and in some cases, leftover models and skins. The secondary goal now that the Defreezer utility exists is to represent the post-Endor galaxy and let the player work towards whatever outcome they want, with whatever group they want (within reason), so essentially if something is available on the map, eventually you'll be able to pick it. In 2.2 this means enabling the Duskhan League in whichever GCs they're already in, and enabling playing as the Warlords, which have been split into Harrsk, Teradoc and Zsinj's empires, who will have a mix of different Imperial units. Ideally this would also include the Hapans, but they'd need a bit more expansion first.

Another goal is to try to mitigate the badness that is EaW's land battles. The first step in this is to remove some of the worse and more tedious ICW maps and re-enabling some of the vanilla maps so we can reduce the unit speed. Honestly, we have pretty much no hope for land ever being anywhere near salvageable but we'll see what we can do (and before anyone says anything, the presence of Clone War units wouldn't actually make ground battles good). 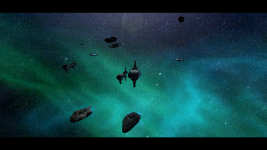 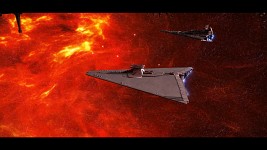 The goal with Ascendancy 1.0 is much as it always was; we're gathering the feedback from 0.95 to finalize the New Republic and Imperial Remnant, while adding the Empire of the Hand and Pentastar Alignment We're also adding some neutral structures and objectives, including the gravity-manipulating Centerpoint Station. We intended to include several redone models and skins, especially for the Empire of the Hand, however since the focus is still primarily on setting up gameplay mechanic and faction identities, the existing Empire of the Hand ships will be the same versions as exist in Imperial Civil War 2.1. After the release of 1.0, we'll start to redo and update certain models, with the New Republic's Ferret Scout and Empire of the Hand's Ascendancy Star Destroyer at the top of the list.

Tech trees are another primary focus in 1.0. In the existing versions, both factions have about 90 techs available to them, and in 1.0 the goal is to release with each faction hovering around 120, so even the existing factions will have several new dimensions to them upon release. On top of these new techs, each faction will be gaining some units; we've already announced the Imperial Remnant's acquisition of the Allegiance-class and Modular Taskforce Cruiser in exchange for some units being sent to the Pentastar Alignment, but the New Republic will also be gaining some new toys which we haven't mentioned yet, filling out it's currently-lacking Cruiser roster. These are the Sullustan Dauntless and Corellian Proficient. 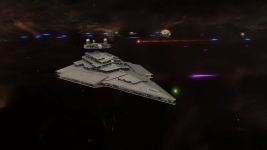 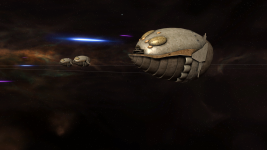 I've made a new channel on which we will be posting Let's Plays of the mods while they're in development, including both ICW and Ascendancy. This way, those who just want to see feature previews and trailers can see them on the Thrawn's Revenge channel, and those who want longer-form playthroughs can see them on the Corey Loses channel. The first series is a playthrough of Ascendancy 1.0 as the Remnant against all four 1.0 factions. I may eventually start playing other stuff, if people are interested in that.

Thanks again for your support for the last nine years!

I'm excited about the news for Imperial Civil War, and Ascendancy! Very cool.

Well, regardless, a Happy Anniversary to the mod developers, and the sum total of their efforts. We, the community, salute you!

I'm a little confused. In episode 2 of Gul Dukat's lets play of Thrawns Revenge, when you were being interviewed, didn't you say that the Pentastar Alignment *weren't* gonna be added to Ascendancy cause they feel too similar to the Imperial Remnant?

We explained the changes we made to negate this when we announced the PA.

Oh damn, I'm way behind on news, sorry to look like an idiot :(

I loved this mod from 2.0... However I just downloaded 2.1 I can't seem to get past the exception error and a blackscreen crash when attempting to load the .bat file. I remember correcting this in 2.0, but I can't remember how. Also I am unable to get the Thrawn's Revenge website to load in any capacity unfortunately. Any help or ideas would be appreciated. With that said, In the words of Palpatine "Good, GOOD..."

Clean install of of EAW and FOC, I didn't patch FOC first though. Was 2.1 meant to be installed over 2.0?

No you're not; however a clean install of EaW/FoC would mean you need to redownload the FoC ram fix.

That could be my issue .Corey. I'll do that. Then see what happens. I know there was a hotfix for 2.0, but I had assumed that issue was ironed out in the 2.1 release. Thanks for the reply. Offhand, any idea why I may not be able to access the official website? Just to make sure I said it, the team you belong to, does amazing work, a labor of love like that, with that kind of amazing polish put on it? You guys should be GRANTED your own studio! It's people like this team, that had the vision to make gaming into what it was meant to be.. making dreams reality.

I'm watching both ICW and Ascendancy. Looking forward to the new updates! I've been playing Ascendancy recently and will re-install ICW here soon
: )

i have atleast 2 question

1. why were dark troopers removed? a part of me is thinking it has to due with how there were no dark droids by the time of reborn paplpatine

2. will we see different troopers? like the jump trooper (thrawn used them along with several diffrent trooper types was sad they never appeared) or the field trooper? (jerec had them) and lastly new vehicles like the shadow droid fighters? :3