Zombie Master is a multiplayer Half-Life 2 modification, centred around a zombie-apocalypse, which throws all but one player in the shoes of human survivors. Pitched against a relentless tide of rotting flesh, they must scavenge for weaponry and equipment just to stay alive. But that one player, chosen randomly at the beginning of the round, is not bound by mortal restraints.

To speak his name is to invite the wrath of hell - but most call him the 'Zombie Master'. He is nigh omnipotent. His invisible hand controls the legions of undead like puppets on strings; slowly closing the net on the humans while they run to and fro like rats in a maze.

* A wide range of weapons to scavenge such as shotguns, molotov cocktails, rifles and more
* A number of challenging objectives that encourage players to team up and work together
* The ability to interact with the environment to build barricades and carry objects

* Real Time Strategy gameplay; create and command your own undead horde
* A wide variation of zombie units encourages the ZM to adopt complex tactics
* Environmental "manipulates" allow the ZM to interact with the world in devilish ways
* Mysterious powers let the ZM manifest his power in a more direct fashion... for a price 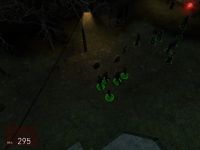 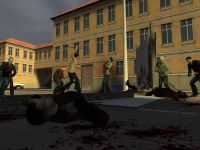 The large 1.2.0 update to ZM finally comes to ModDB. The update adds new weapons, a new zombie type, and many other new features and bugfixes.

We've reached 1.1.2, hopefully the last quick-patch before the next large infusion of content. So, the things fixed so far: Weapons sometimes hard...

We bring you a sizeable update in the form of 1.1.1. Next to various updates and additions, this update includes some new weapon models from the hands...

The ZM source code was released in June 2009 on the ZM forums. Now you can also get it here on ModDB. Be sure to check the included readme file.

Full installer of ZM version 1.2.1, for players and Windows servers.

Full installer of ZM version 1.2.0, for players and Windows servers.

Replacement texture for Drifter by Cremator. For the Zombie Master mod.

Guys it's being developed under a new version called zombie master reborn check it out! They are about to release possibility beta 7 in the summer stale on steam.

This is in my top 5, maybe top 3 or top 2 multiplayer experiences ever. In its prime this was unforgettable. RIP Zombie Master.

Here is some game play footage, feel free to use it for whatever!

People still play this one ? I'm looking for some cool games from the past =)

Would love to see some players there, it includes a lot of the old maps!

I'm a original player, I try to get on now and then to see if people will ever get on again and it would be really amazing if people got into this game again. from the funny moments to the clutching a game, obstacles, ZM controll... Probably the funnest and funniest zombie game ever but Zombie Panic still tops this.

Yo! Old skool player here. If you guys wanna get a server going email me my name @ gmail !!

Veteran reporting in. Was great. Maybe we've met? MaxyWaxy was my name on there. Didn't play on the upgrade-servers though, only Vanilla.

RIP ZM. May you rise again with a modded HL3 version. So you know, never. Unfortunately.