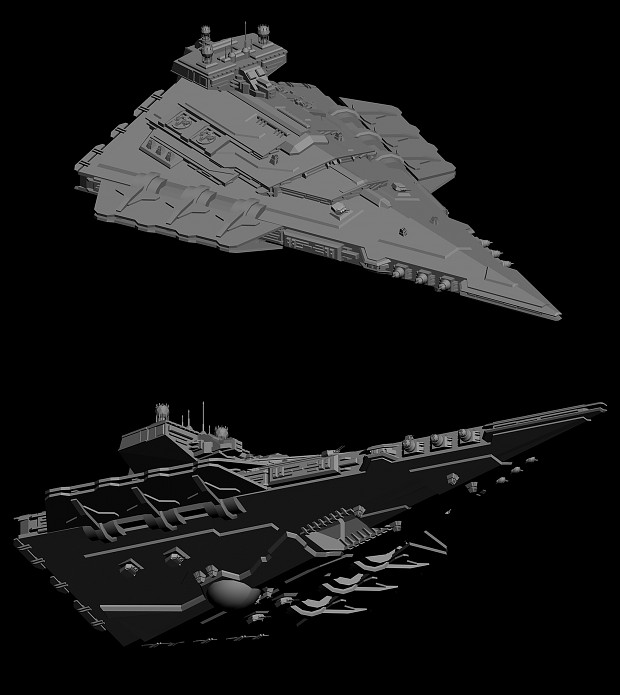 Nice Concept, always was a big Fan of the Victory glad to see it have a new lease on life.

wow, now i wish to see normal stas destroyers MKI and MKII with this ammount of detail, this is what EAW needs, high poly models and good FX :D

Oh, also i hope the textures are as awesome as the models. Would be real **** if the textures would mess everything up.

How should i know who makes the textures?

I am making all textures for the mod ;)

You used to work with us, you should know this ;P

Hmm i just looked through the images section until i find the answer. There are more people listed with textures i think?

Nope, I am making all textures.

I have chosen to do this to create a uniform design to the mod. All textures will be created in the same style as the MC85. That means all units will have proper shadowing, precise detail clarity and the same level of quality. It ensures a well polished final product.

It does create uniform, but if you would for example do Imperial remnants, X would do New Republic and Y would do Youzhan Vong models it would increase variety.

I have completely different texture sets developed for each and every race. This has already been taken into account.

What factions will be playable?

Also you guys do an amazing job, so...

Everything in this mod looks like it should be blasting things into nothingness. You guys are awesome.

Will there be a imperial star destroyer III too?^^

Imperial Star destroyers were regularly modified by everyone form warlords to pirates, so maybe in the Remnant a bunch of mustache twirling warlords get together and give ISD2s tons of modifications with some help from Byss scientists, only to be canned by Pellioean for being "impractical" or "not stragiectical" or "we don't make superweapons anymore"

now that's an idea. is the ship based off the Mark 1 or Mark 2 Victory?

Wow, this ship just keeps on going despite how old the design is.

VSD's are by far my most fav ship...really a very beautiful model

this would help to explain how the Imperial Navy managed to go from having 25000 Imperial-class Star Destroyers to 200. hell, retire two ISD-2's and you can outfit 3 of the new Victory-3's with the Heavy Octuples (don't know what you would do with the Oct. Ions though)

and given that the Navy tended to favor Standardization, other components probably could have been used as well. I'd even go so far to say that on paper, a Victory 3 would be similar in power to an Imperial-1. and if you get rid of at least some of the Heavy Vehicles in the ground compliment, you could make room for additional fighters. 10 AT-AT, 10 Juggernauts, and 15 AT-STs. you can probably get a half dozen or so TIE/Ln's or 4 TIE/In's per AT-AT, a 1 for 1 switch for AT-ST's, and probably 6-8 Fighters or 4-6 Interceptors for every Juggernaut, depending on the model used, as well as having room left over for all the support gear required. and since one-man fighters tend to require fewer crew to watch over them and man them than it takes to do the same for any of the ground vehicles, you have still more room in the crew quarters.

Looks great! I wish the Turbulent class fell into the timeline of this mod because I could see using the Victory model as a starting point and making an awesome looking Turbulent out of it. Just remove the wings and lengthen and widen the hull to fit more heavy guns in the usual ISD placement. I like your description of this ship because I could see it as the direct predecessor to the Turbulent.

That's such a mean looking ship. Will the remnant be it's own playable faction?

Developed out of necessity, the Victory MK3 became the mainstay battleship for the Imperial Remnant. As the Empire faced drastic resource shortages due to overpopulation, it quickly became impossible to maintain a fleet of large sized ships that were largely in need of repair due to the civil war. The Empire chose to scrap many of it Star Destroyers and reuse the armament on smaller more versatile ships. This allowed for greater flexibility and mobilization of the Imperial navy allowing it to defend the many increasing threats of the Vagaari Empire along its borders.

The Victory MK3 was retrofitted with 4 octuple turrets scrapped from Imerpial Star Destroyers that were damaged to far to be repaired.