Thanks for voting and helping MechCommander 2X (wolfman-MC2X) on it's quest to become the 2021 Mod of the Year. You are now in with a chance to score some free games from our #modlove collection. Help this mod secure more votes by embedding the widget (or link) we have included below on your favorite sites.

I personally never liked the strong haze as I rather enjoy a clear and crisp view into the distance.
Since MC2X(R45) the haze can now be reduced to 10% of the original setting (almost eliminated). I made code changes and the Gaming Options Menu allows you now to set Low Haze. 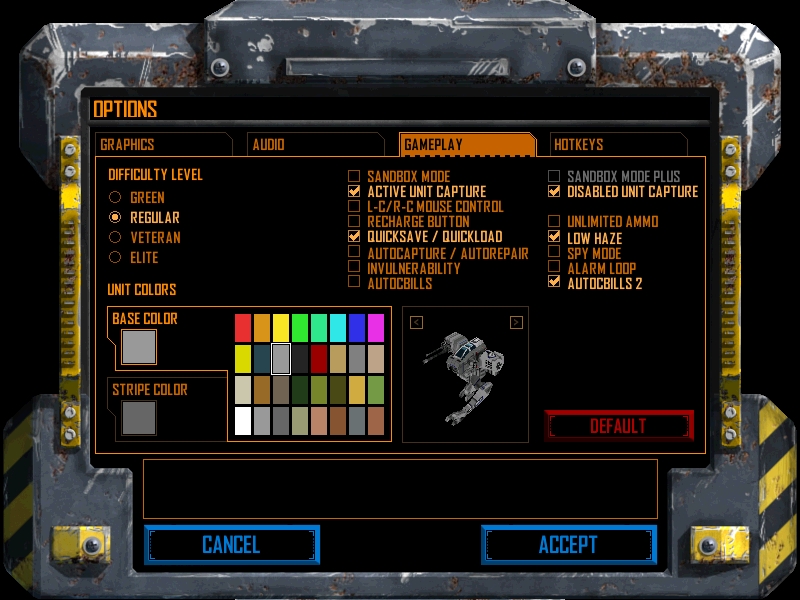 Enjoy this unique feature only available in MC2X. 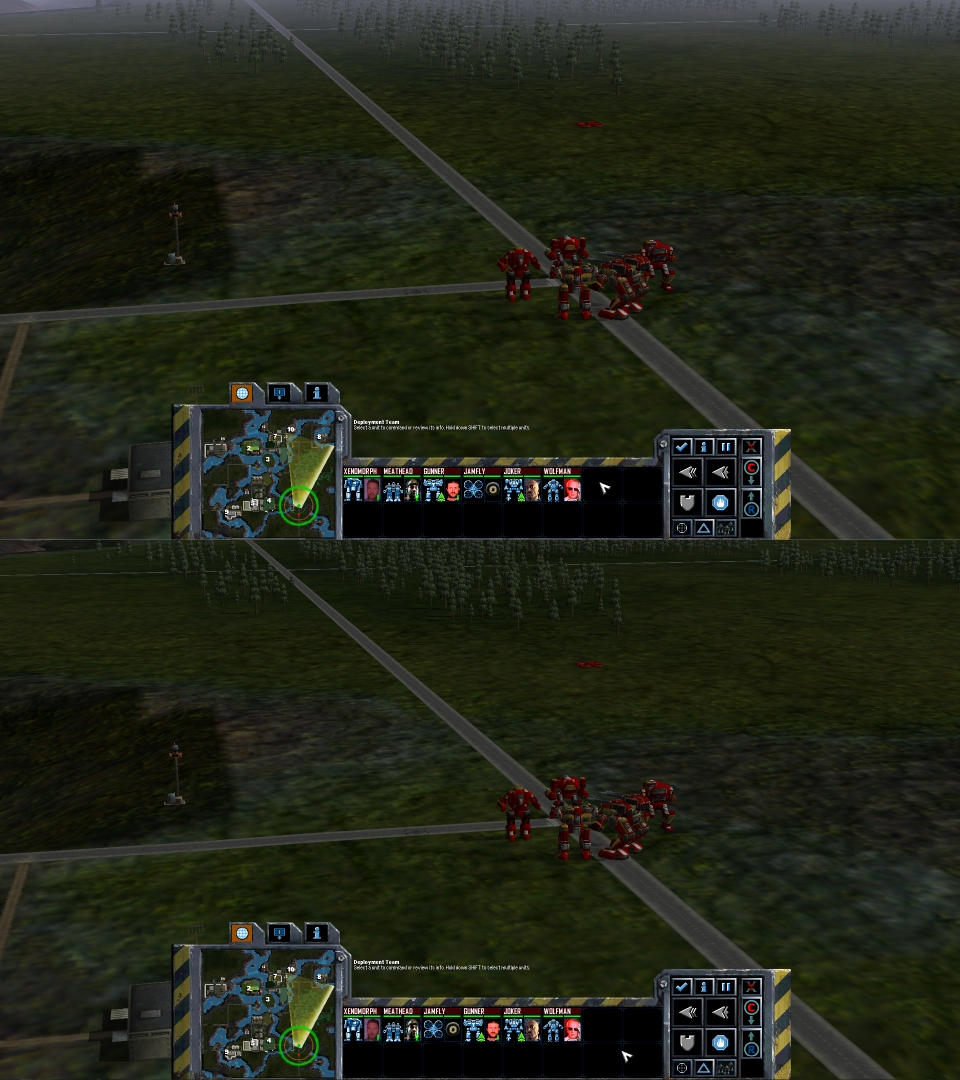 As in MC2X over 200 units from 8 types can be purchased and deployed I implemented Unit Type Selection Option to jump directly to the desired type without...

The support options had been extended in MC2X compared to the original MC2 since a long time. For (R45) the Support Options have been revised and further...

Here is an overview with explanations on all game options implemented in MC2X (R45.

MC2X-CVE-G is a “Campaign-Gaming-Only” version of MC2X featuring the 24 mission campaign “CARVER V” originally released as MC2 by Microsoft. Now...

Latest Release of the Design Package and all design tools containing improvements and bug fixes.

Have some fun during quarantine at home you can try to succeed in this mission and learn all about the unique features and options in MC2X(R44).

I will release my next campaign "REAP" mid of October.
It is finished and tested and packaged. I just game through the freshly installed last version for a final time.

It became clear to me, that gamers need to be familiar with my support options and weapons to be successful. If you just start the campaign and try to game old MC2 style; you will fail miserably.
Most missions required thoughtful use of shields and support options like the specialist and drones. Specifically the Specialist with his ability to freeze units or to totally destroy them is important to understand.

If you are not familiar with it give yourself a crash course/training using the test missions in MC2X (R52) Design Package that was already released some time ago.

Without the support options you can not succeed and that is what I intended.

Who can design some MC2 inventory for me?

In the past magic did a lot of inventory design for MC2X and his MCO. I told him what I needed and he created it and we both use it in our mods. For example the vehicle repair bay or the big spheroid dropship that can move over the map are two great results of such requests. We cooperated on multiple layers for over a decade still following our own mod concepts. Magic took a break from MC2 modding now almost a year ago and it is unclear when or if at all he will come back to it. His interest to support me on MC2 has stopped as well but we are in good contact.

I am looking for two vehicle models without turrets that can be integrated into MC2X. There are a handful of MCO fans out there that are capable to provide such things. If you are interested in willing and capable to work on it; let me know.

I am looking for a landing hover and infantry transport vehicle.

The models need to be simple like existing vehicle models. Thank you.

Finally I decided to create a new campaign based on the current quite stable looking version (R48).

Centerstage will be a Private Military Contractor with name "REAP" that will offer all types of projects (missions) with very different requirements and in different environments. Thus campaign name is "REAP".

The projects will be rather difficult and unusual and not be connected.

There will not be any overarching story or a noble cause in that campaign.

It will be about the skills to be a successful Mercenary in these difficult missions.

If nothing unexpected happens and I do not have to make fixes to the gaming system, the work on this campaign will take throughout 2021 as I am envisioning 12 projects for that campaign.

I created already prototypes (concept-missions) for two project ideas and started to translate them into real campaign missions.

I will post updates as there is anything worth it.

Little Update: 8 missions conceptually finished, designed and tested.
Need total revision of all texts objectives and details.
Working on mission concept #9 and want to change source code as well to integrate a troop transporter that can pickup, transport and deploy infantry units (potential pilots for captured units) like the transport vtol can do. Not as simple to integrate because troop transporter is not a mech type object in the code; need to write the code for groundvehicle object. Version number is already up to (R49). Reap Campaign will have 12 missions as originally planned.

Now all 12 missions have a map and a mission concept and are tested a few times. Detail work has begun and I required some new features in the code Thus I am at R50 right now.

Campaign REAP almost finished. One mission needs more work. Implemented some fixes and changes to the gaming system on my way. I am at MC2x(R52) now. I think campaign should be out by mid October 2021.

this stand-alone conversion is excellent! i have been playing the latest version of MC2 Omnitech for the last 2 years and didn't come around to testing your build (knowing full well it did exist). i can see how there is a lot of *Magic* in there ;D.

the re-work of the support drop system is especially nice and finally feels useful. also the optimization on the display of far away LODs is awesome, it's something Omnitech is definitely lacking.

some small gripes: the mission screen not being in the respective aspect ratio is rather hard on the eyes, the loadout-screen seems really "cramped". Omnitech is a bit nicer in that regard. also menus in the loadout screen cannot be scrolled through?

edit; some of the sound samples seem awfully off compared to the original samples. is there a specific reason why those were changed to custom sounds?

again: outstanding effort and dedication keeping this running for as long as you have, too. :D

"The mission screen not being in the respective aspect ratio is rather hard on the eyes."

Please explain; I did not get your point yet. Thank you!

Menus in the loadout screen cannot be scrolled through.
This is a clear thing to fix and a good catch. I never realized that myself. Mouse-Scrolling is not possible anywhere right now. Bad!
Could not identify the root cause yet but it is on my list now and I will find and fix over time. Thank you.

The other points are taken and responded to before.

I fixed the scrolling issue. All selections can now handle mouse-scroll. Will be released in MC2X(R48)
Thank you again for making me aware of it.
It was not in the original game but Magic added it to MCO in 2011.

didn't mean to annoy you with the menu layout.
i can explain in even greater detail if you wish. ^^

Please do. I am not annoyed Any constructive feedback has a core of truth and I like to understand before I allocate my time or not.

I decided not to change the screen resolutions beyond the map you game on. I just did not give it any priority and I wanted to keep the original touch and feel of the game.
I added several sounds for various new features and I know some are not fitting well. It is the best I could do for now. My motivation to record all the sounds differently and create new sound files is very low. I would rather like to create a new campaign but currently struggle to dedicate my time to this. Thx for your feedback.
When I work on MC2X I have most fun designing new features or options that are not available elsewhere.

as much as i agree with keeping the original tone of the game, the usage of the "screen estate" before the mission was poor back then, imho. it's not so much the resolution but more how the screen is utilized.

i too was thinking of creating a new campaign but more along the lines of re-vamping the available campaigns for omnitech and maybe condense the shorter ones into a big one which seemed rather do-able without engine level changes to the code.

Commandos 1: Men of Duty Commandos: Beyond the Call of Duty