The Dark Sense of War

"The Dark sense of war" is a total conversion mod for Doom III.

It is running on the most dynamic engine frequently called as "Doom 3 engine" but in fact is called "Id tech 4". Even if the engine has a lot of years in activity, It still manages to compete with other more advance ones.

The current project is a spin-off to the old classic game, "Return to Castle Wolfenstein", which gameplay and atmosphere successfully got into our hearts.

The project aims to bring back old school gameplay which a twist of nowadays one, with that said, it is not going to be on rails. It is suppose to be more open but at the same time as linear as "Return to castle Wolfenstein".

Inspired by a lot of famous "puzzle" and "adventure" games, our famous hero "William 'BJ' Blazkowicz" is going to another quest to castle wolfenstein (or at least it's supposed so), but things are going to change ominously very soon...

First Person Body View... Is it really that Special?

A lot of people have been following the mod for a looooooong time. It's very well known that this mod used a fake way to create first person body view (Take a look to the first screens on image gallery).Time has passed and so the tech has been improved (or make worse, depending of you point of view).So, I will have a few lines to explain how is it done and it's advantages and disadvantages... 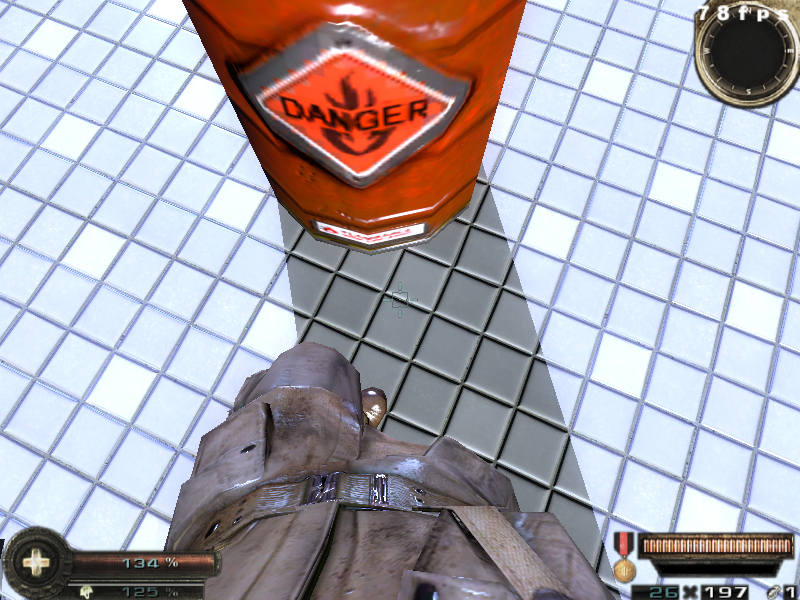 1- It uses a custom model that it's mostly altered to make use of it in first person. In fact, the model is the player model, and the mod's CFG (autoexec) forces you to use r_skipsuppress, showing the actual thirdperson model. The model has both arms deleted and the head, but also optimized (back is not going to be seen). There is a huge load of cmds altered in order to make it look good. It's not simple, but yet effective (pm_ wise).

2-It's bad at the same time. Really, it improves visual quality and inmersion a lot, but it also limits you.
You can't use mirrors (well, reflective water works, since you only see the lower view, so).
You can't play in thirdperson.
You can't use it in multiplayer, only works for SP (not even coop).

So, after a long read, some modders would actually get some little tips hide inside the whole text, obviously not revealing the full way of do it.

And so the story begins...

1944, during the world war II. Another travel to castle wolfenstein, I guess?

With The New Order out, I have lost all interest in this mod, which is a shame because it could have shaped up to be something amazing.

I really understand you.
I love that game. This project makes no sense since The New Order appeared. Das ist gut! xD
I hope someone has the valor to make a Rtcw HD remake.

please tell us your progress now and add more pictures please :) I've been waiting for soo long, since 2011 lol

we still waiting, any progress?

I have stopped it for some time due to limitations.

It's not really dead, it's canned. I don't have enough time to keep working on it sadly :(

One of the biggest problems is that the polycount goes crazy when lots of lights interact with characters...
I guess I will have to wait for a deferred render solution, otherwise...

I'm just thankful you didn't kill it off, and you're just not able to work on it right now. I've got to agree with SamVision, if you were to continue, you should focus more on the game mechanics than the graphics, if possible.


Doom 3 uses forward render. What I need is a deferred solution.
Otherwise, the performance would be horrible even on Mid Range cards. (560 7850...)

x4 polycount, that's so f@cked up.
Lights are supposed to interact with materials, like nowadays.

Why not just disregard pretty lighting effects and focus on the game mechanics and design?

Single & Multiplayer
Tags
Embed Buttons
Link to The Dark Sense of War by selecting a button and using the embed code provided more...