The Empire had just destroyed Alderaan. Vader, after years of training and preparation, believed it was now time to move against the Emperor. Vader made a surprise visit to Coruscant and rendezvoused with his Sith apprentice, Darth Acris. They moved quickly and in an epic struggle with Palpatine, Vader emerged victorious as the new Emperor. Acris became his second-in-command. Vader moved quickly to consolidate his power and legitimize his rule, winning the support of nearly the entire Empire through fear and admiration. He also won much support by personally leading his men into battle fearlessly and by taking an active role in running the day-to-day functions of the Empire, unlike Palpatine who had greatly isolated himself from the galaxy. He also continued the massive military buildup of the Empire. Due to this, many new people flocked to the Imperial cause signing up for the Imperial Military and Administration. The Empire was swarmed with patriots willing to lay down their lives for the Empire.
Mara Jade at first opposed the two but soon relented due to her love for Darth Acris, and the two wed. Tarkin respected Vader enough to accept him as leader, knowing how powerful and intelligent Vader was. Vader, even though he took the throne by coup, was accepted as the legitimate Emperor - not by all however. The equally power hungry Dark Jedi Jerec, using the Dark Side and cunning, won support of some Imperial commanders and established his own evil Empire, named the Grand Imperium. He was joined by Zsinj, Kaine, and an assortment of other Imperials, including the Inquisitor Tremayne. He declared war on Vader and prepped his forces for battle.
The Rebel Alliance saw this new Imperial Civil War as an opportunity to keep the Imperials attention elsewhere and their forces divided. The last remaining Jedi, Luke Skywalker, still hoped for a restoration of the Old Order. Their hope and confidence boosted hugely, the Rebels were now ready to set up and dig in for this war of galactic liberation.
But other powers now saw their chance at galactic domination. With the Emperor gone, Prince Xizor could now duke it out with the Dark Lord for control. He began pooling all his resources into an all-out war with the Empire, although he retained his legal (and illegal) business operations, after all, the Black Sun was a crime syndicate. He was joined by the Dark Lord Darth Maul, who escaped Sidious' grasp and once more went into hiding, but now saw his chance for revenge. The Hutt Cartel once dominated the galaxy and with strong leadership and immense wealth from piracy, they could again. Thousands of years ago, the Mandalorians were the most feared warriors in the galaxy who fought glorious battles against the Jedi and Sith. They built a powerful empire of their own. Why not again? Could a new Mandalore reunite the scattered clans and roaming mercenaries into a professional and deadly Mandalorian force.
Many challenges lie ahead for the new Emperor. Even with an unmatched and loyal military, the task will be daunting. Can Vader reunite the fractured Empire while holding off Pirates, Rebels, and Mandalorians on multiple fronts? Can he preserve order in the inevitable chaos and return peace to the galaxy. Can he achieve the ancient Sith dream of total galactic control? Or will you try and restore so-called freedom to the galaxy as the Rebels or create your own empire as one of the other factions? This is Vader's New Order - Empire Surrounded!

In order to continually find ways to immerse oneself in the game I have now given the Rebellion and the Empire different options for worlds. 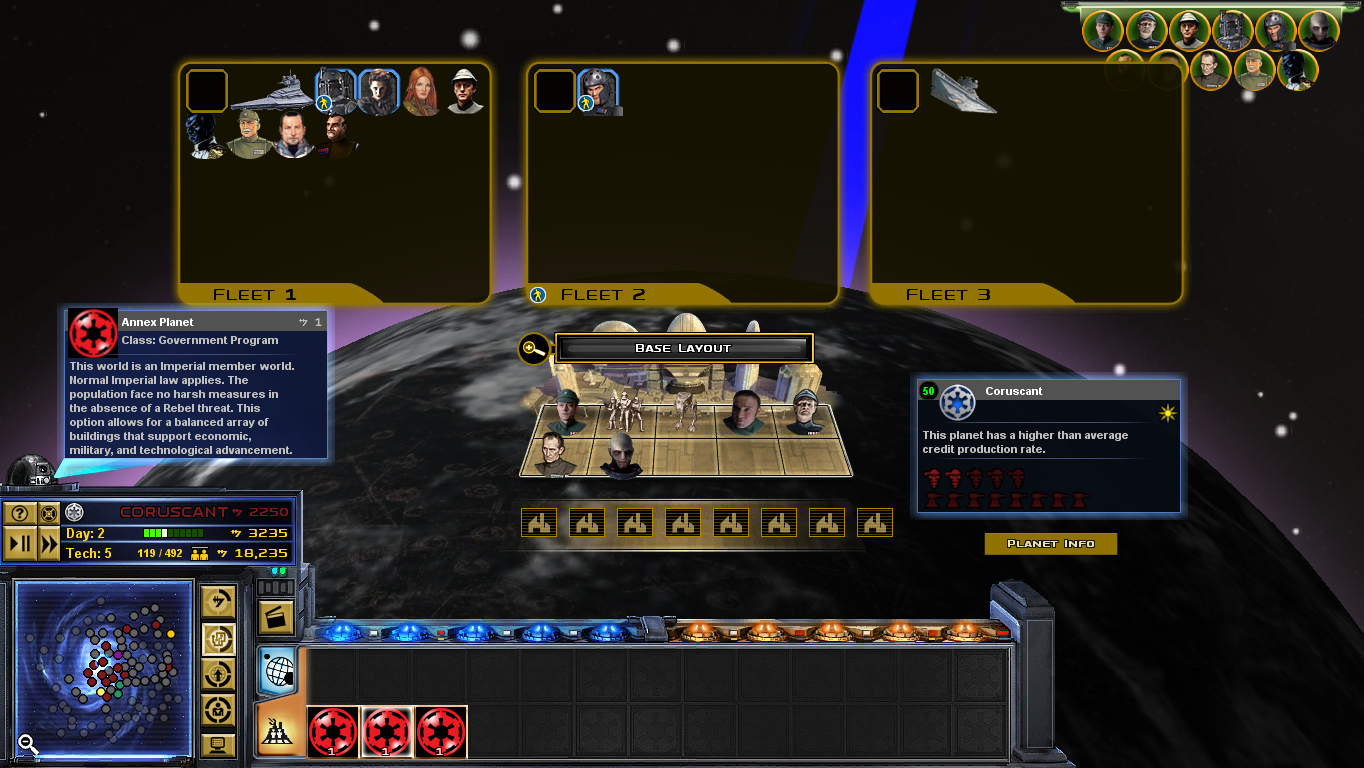 The Empire has the option to Occupy, Annex, or Oppress a planet.

Occupy: - A temporary Imperial occupation. The Empire does not disturb daily life and merely uses the world as a base or place to get resources.

Oppress - a world ruled under martial law. Choose if desiring the ability to build military infrastructure. 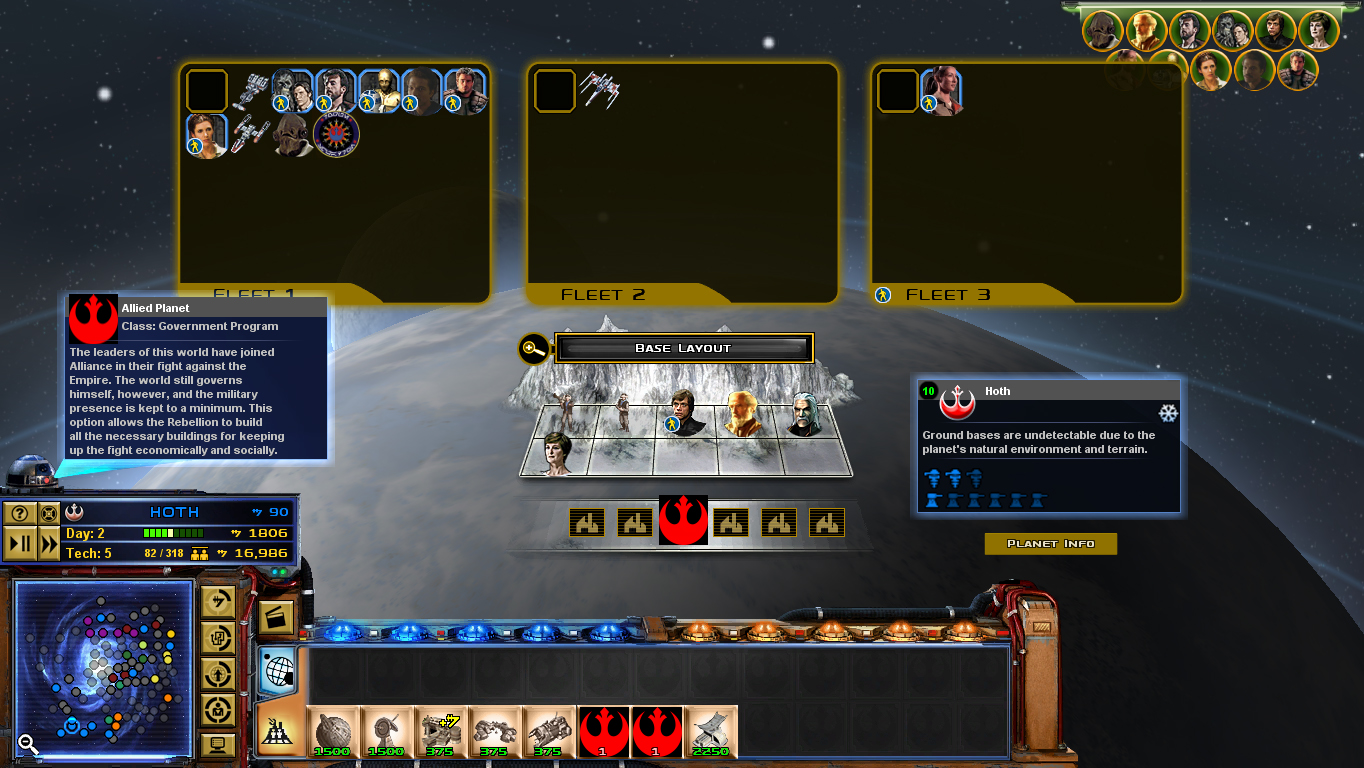 The Rebellion has the option to Occupy, Ally, or Militarize a planet.

Occupy - a temporary Rebel occupation. The Rebellion does not bother daily life, merely using the planet as a small base and resource gathering outpost

Ally - The world has decided to join the Alliance in the fight. Their government is still their own however and the military presence is not strong.

Militarize - this world is a military base and depot for the Alliance. Most of the troops will be recruited here, especially the heavy equipment.

The AOR system for some units and many vehicles is still in place.

I may in the future add options for the other factions, save the Black Sun due to their use of the Corruption system. For now however it will only apply to the Empire and Rebellion.

Just a quick update on what's going on. Now that the University semester has ended I have more time to work on this mod.

Hey so as the mod development continues I have decided to add some more features from the new canon.

Hey I'm looking for 5 guys to beta test the mod. For the most part the game is done - except for custom battles, which are proving difficult to work properly...

1/4 of the reason I love Star Wars so much is because it has one of the greatest movie soundtracks of all time. Although z3rox's original mod, which this...

A map that will be featured in VNO and another upcoming mod. Free-release, just give me credit if you use it in a mod.

A map I made for a friend, who may feature it in his mod SGGW. It's free-release, just give me credit if you use it in a mod. A map of the toxic waste...

A map for Ziost. Free-release just be sure to give credit where credit is due. Uses vanilla props and props from the RAW team who came up with amazing...

Alpha version of VNO. The alpha is pretty much z3rox's mod with a few new additions with units an dplanets but not much else. It's just to get you interested...

is this project still going?it will be a waste not to

I hardly work on this anymore but I will try to get it out eventually, within this year.

Holy crap! This mod is amazing. The AI is actually challenging now and acts very quickly and efficiently to your actions and sticks and it makes a interesting war. On top of that there's a whole bunch of new planets and units that really enhance and change up the gameplay. The increased unit capacity has allowed my Star Wars fantasies to come true, like recreating the battle of endor. (Beautiful)

The only problems I've encountered is that the shadow troopers have no entity. I know it says they can become invisible, but they spawn with no entity and don't attack and don't die. The other is that the recusant ship, when it uses it concentrate fire ability the animation around the target ship spams and lags the game. Those are the only2 problems I've encountered.

The problems are minor, but the gameplay really makes-up for those small things. It really is a mod worth getting.

when can we expect the next update?

anything new for the mod in the new year?