This mod will feature :

A Fresh edit to the Campaign

This year has been extremely busy for me in home life, so my progress slowed down quite abit, but i have been making good progress

Due to lack of time, and slowed progress, im open to opening the mod up to a team of people that have some skills in modding and modelling, Members of the team will have instant acsess to the BETA's and will get full credits with any work they input

Currently im looking for Modellers, Unit ability coders and particle effect coders, this is merely to speed up the mods progress, if your interested please message me on discord directly (DM)

On top of this we have a discord server for you guys to join if you want to be involved in the discussions and see updates before i post on moddb :Link here Discord.gg 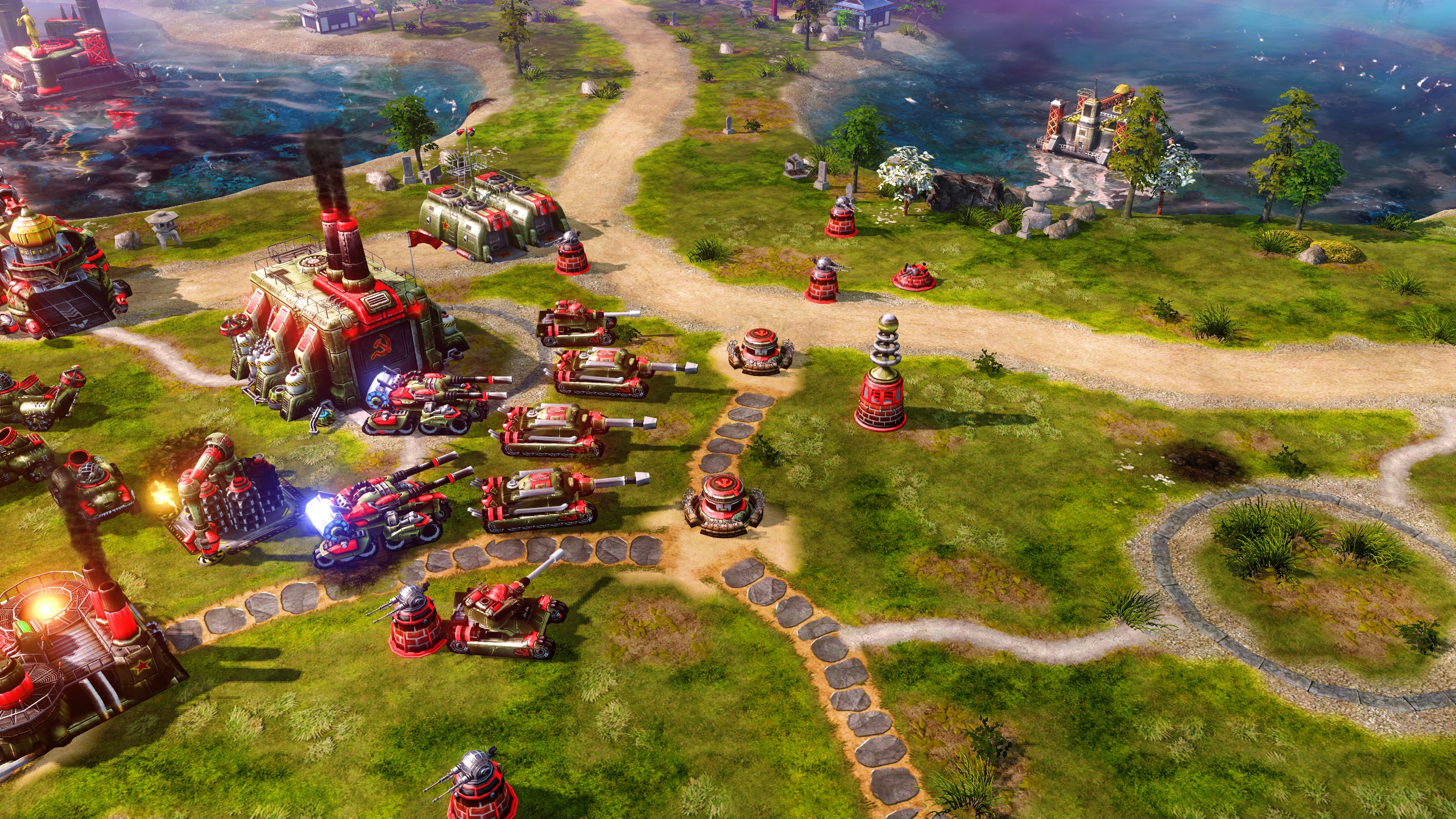 In this image you can see some new tanks that i have made and added to the mod, Starting with the new HammerTank model, the hammer will lose the Leech ability and im not sure just yet what will replace it, but the Hammer tank is something i always wanted to change due to disliking its original model

Secondly we have a new model for the Soviet Medium Range tank, currently the name for it is the "Heavy Rhino Tank" but this may be changed in time 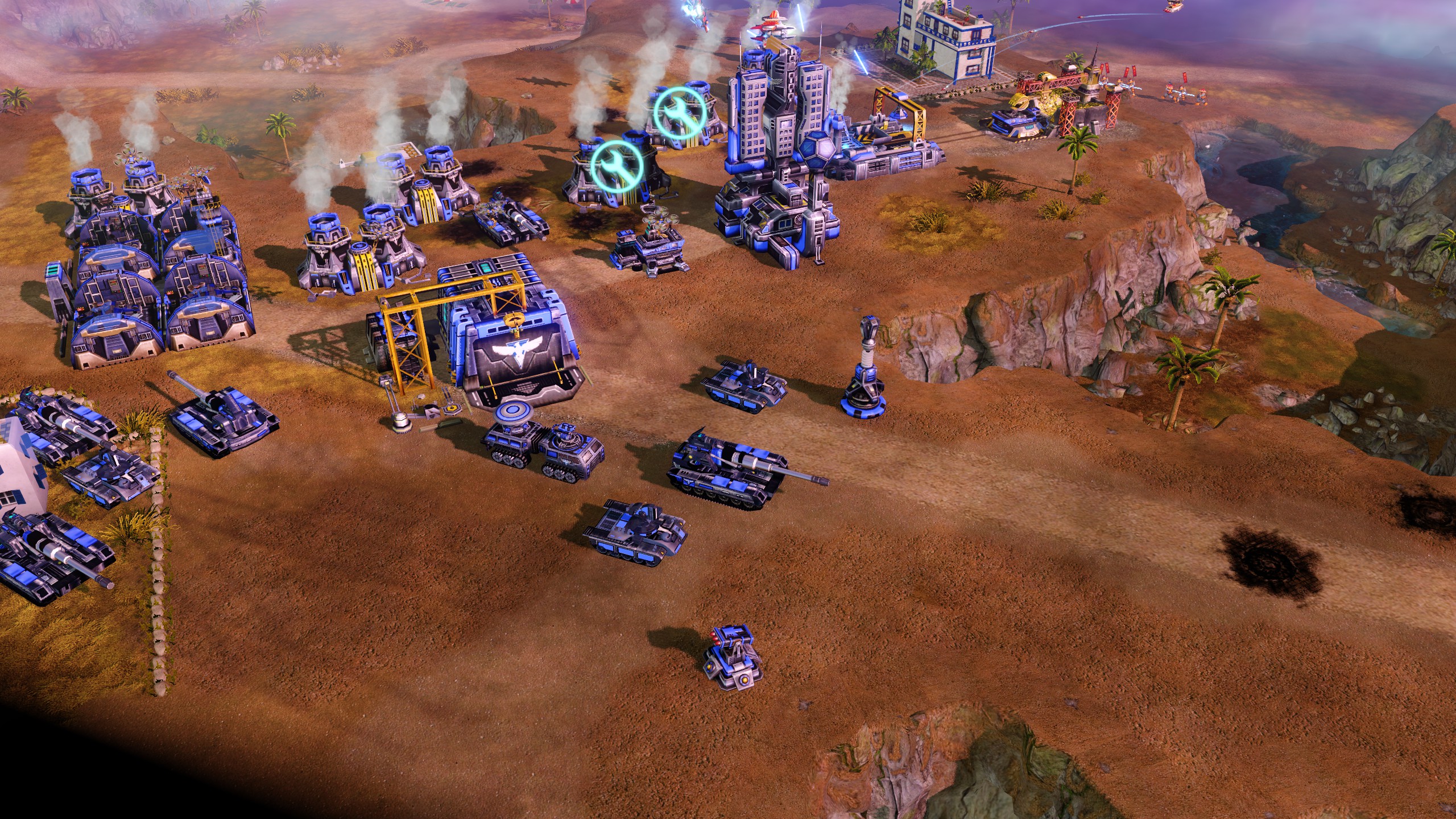 Next we have a new image of a Tank Destroyer, this will serve as the Allied equivalent of the soviet Tier 2 medium range tank, The Prism tanks weapon FX has also been updated to a closer visual to the Red Alert 2 white/blue beam 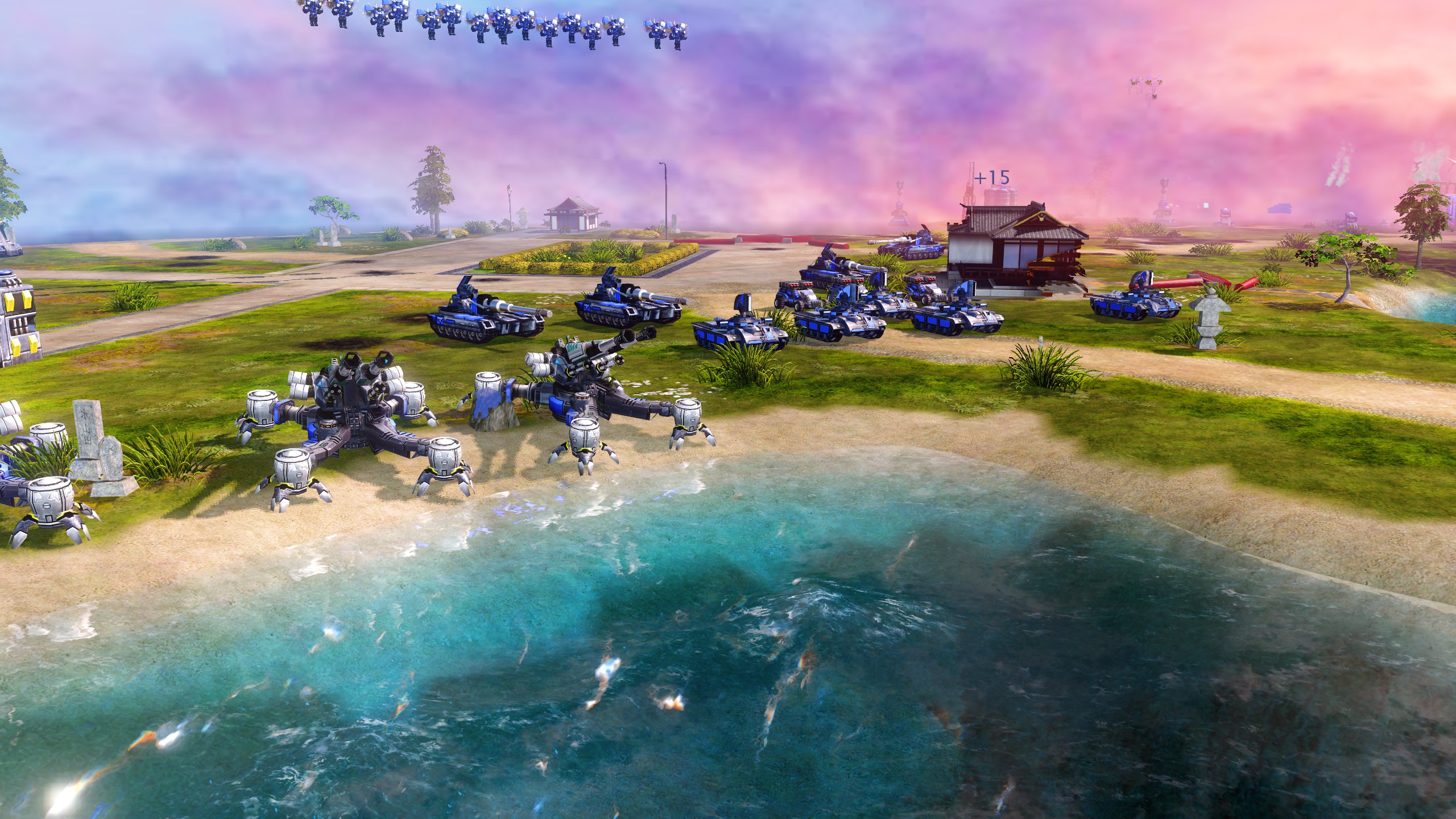 Next up is the overall units plus another new Addition to the Allied army, "Rocketeer Soldier" a fan favourite from Red Alert 2 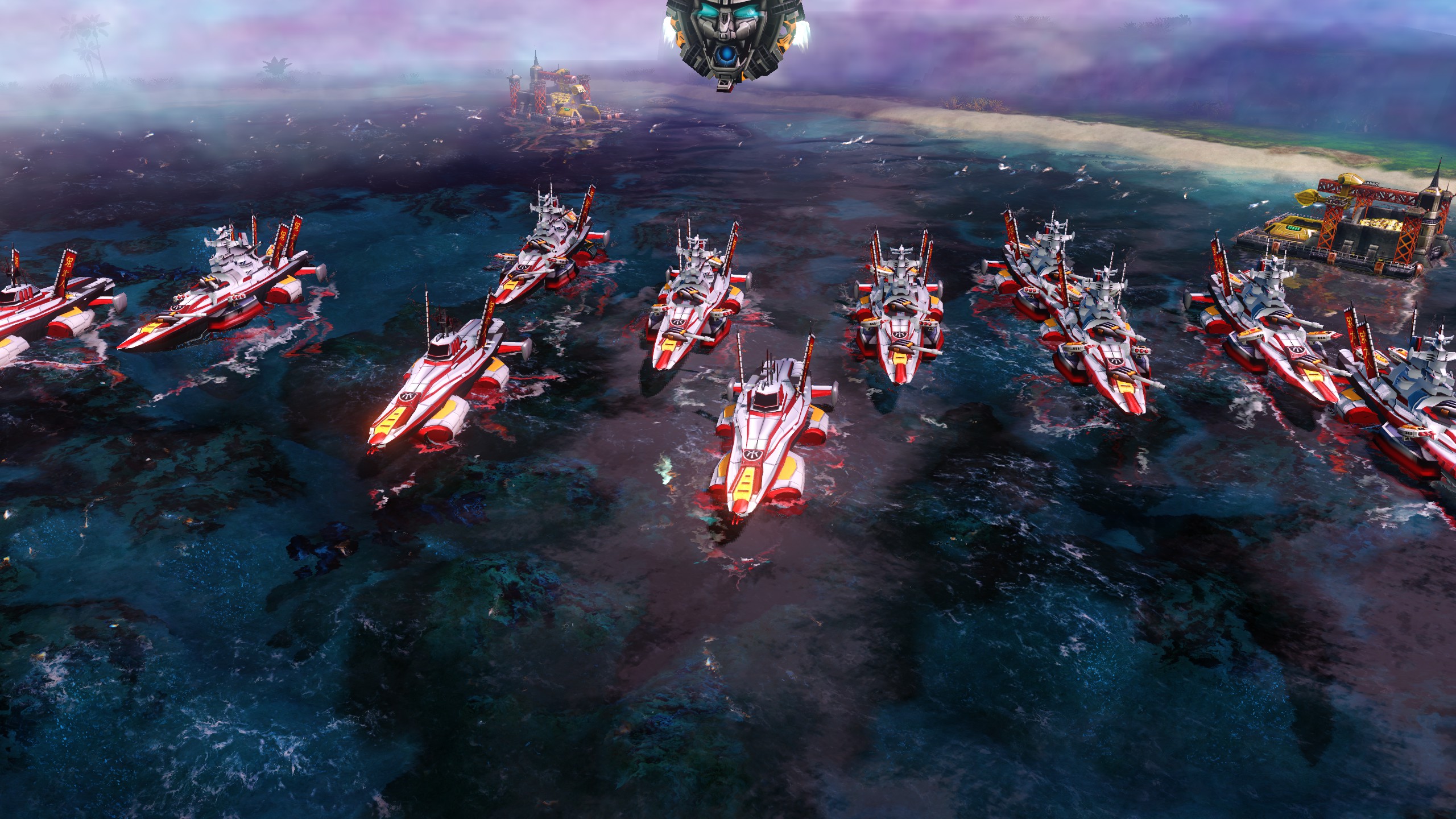 Here we have a new model for the Naginata Cruiser as well as the TIER 4 Navy Destroyer class ship (note in this image is the Giga fortress, this unit will not be available in 2.0 as it will serve as the EMPIRE Epic unit which will be in 2.1)

Before we move on, some info on what to expect in 2.0

so originally i was going to be throwing in tier 4 defences, tier 4 units and epic units, but after some hard thinking, i decided it would be best to do everything up to TIER 4 and NOT include Epics and T4 Defences until a much later version, as that will give me time to make some really unique models that would fit the RA3 universe correctly

moving onto the final image that i would like to show 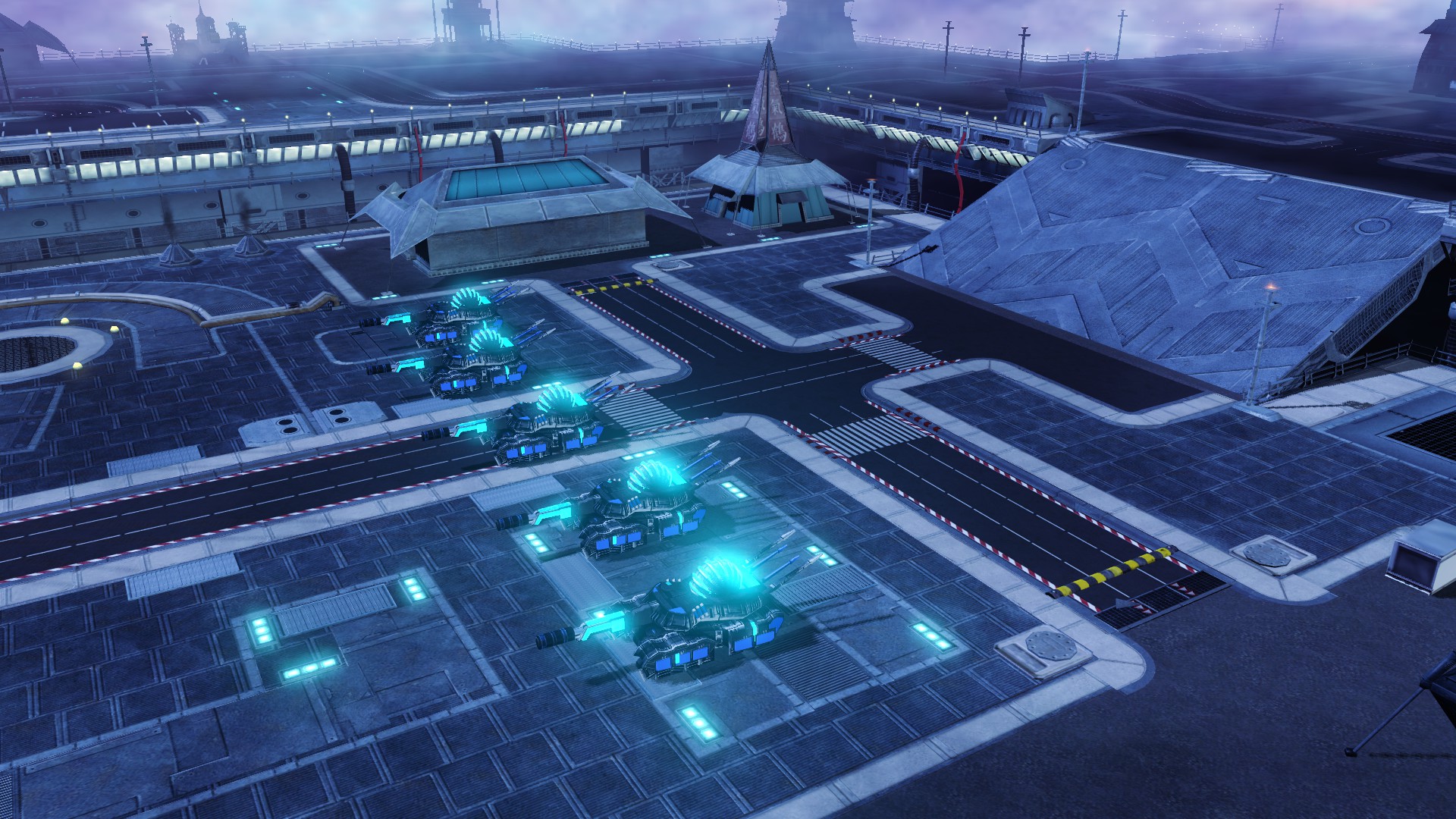 So i guess you guys are wondering about Future Tech ?, well here is a very early Unfinished design of a new tank "Chrono Tank" that will be available as Future Tech

So is there an official Road map ?

Yes and here it is

New FX and sounds will be added

New Tier 4 Units will be Added to the mod

A fully re worked Ai

Tier 4 Vehicle for all factions (1 per faction)

Epic Units will be added

Custom Challenge maps will be added

and any 2.0 bug and balance issues will be fixed

Future Tech will be added as the 4th playable faction

Any previous fixes will be implemented

1 New Sub Faction per Faction will be added

I hope everyone is well and safe

i am working hard to get 2.0 out for release as soon as i can

So guys, time for some progress now that we are nearing the end of the first month of 2022.

The final 1.0 patch 2.0 is being worked on and it will be a full remake of 1.0, check my article for more information

Thanks for your hard work mate, keep up the work!

Very interesting, I see a man who loves the second part of Red Alert. I wouldn't be surprised to see familiar models and sound effects. But I have a question. You mentioned that you will be adding a fourth faction of Future Tech. Will there be a variety of sub-fractions of each of the factions? Additional neutral buildings? Other factions? Yuri's army from the Red3: Synergy mod. Chinese faction from Eastern Loong. European coalition. They look like GDI, from the first tiberium war. As for armament, it remains the same, with some difference. Or is it not planned yet? Will the closed version be shown on the stream?

Thankyou
RA2 was a big part of my childhood

And then 1 sub faction each

Once closed testing has been finished, I’ll release some trailers and gameplay videos of them before release

Will there be 8 factions then because if we add a futuretech faction then add subfaction for each then we have 8 playable factions right?

Correct
That is the end goal

Altho this will be a while away after many patches

nice nice, would future tech only have experimental/modified versions of the other factions, or would they also have unique units?

But all models will be new (except the future tech tank, as that becomes exclusive for future tech and is no longer an allied unit)

It is not available yet
I’m working on 2.0 at the moment