RA3 Reloaded is an partial total conversion and balance mod for Red Alert 3 designed to be the way it was meant to be played. It's not just only to return the right type of gameplay similar to vanilla CNC3/KW, but also to return some Uprising content from the RA3 Uprising expansion as well as other new units and new gameplay changes. This mod concentrates mostly on global changes and balances to gameplay. For the changes, please read the PDF file before playing. This mod only works for Red Alert 3 with the latest patch version 1.12, and it will not work on RA3 Uprising because Uprising does not support mods.

Surprise!! Who said the mod is finished after a year and a half? I thought so too when version 1.1 was final, until I managed to do a bold experiment of changes in Kane's Wrath Reloaded (a C&C3 mod) which worked out and so this mod was modified again for the final time, along with Bibber's latest adjustments to the RA3 Mod SDK. Now this latest version of the mod does not cover any bug fixes and the latest version of the mod only took a few days time. I did promise patches for fixed bugs but so far there's not much to fix.

Five other things to say about this mod:
1) Do you know why I released this mod into two parts? The first part of the file contain the static data needed to get the new content in-game and the second part of the file contain the misc data which has compiled maps, videos, scripts and shaders. Bibber managed to tweak that into the RA3 Mod BuildStudio which I found that to be more simplified.
2) For people who want aircraft to attack other aircraft, I have no interest to put their weapons back. But if you want, a source code for this mod shall be released (TBA) and then you can modify the aircraft if you wish to gain back the attack.
3) The power required for vehicles to be built shall affect the single-player campaigns for solo and co-op players. A modified map pack for this is on the way.
4) Regarding remaining bug issues with Uprising content, Bibber fixed most of them (in RA3 Resurrection instead of RA3 Upheaval), but he no longer releases the source codes for some unknown reasons he cannot explain. Therefore in that case, I cannot fix them on my own and Bibber cannot give source codes away to some modders who wanted the recent fixes in their mods.
5) This mod is not recommended to be played under Origin and the C&C Ultimate Collection since mods are currently not supported in those cases. Few other mods can be run under the C&C Ultimate Collection but not this mod. I don't use Origin so I do not know how C&C mods work there. 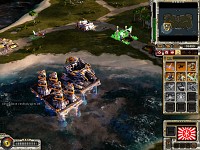 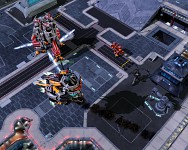 So here are the final global changes for version 1.2 of this mod:
• Added a five-row command build AptUI for all factions to replace the four-row AptUI.
• All single-player campaign maps and skirmish/multiplayer maps (including the Uprising and bonus pack ones) have their zooming (min 150 to max 500) and camera angle position (from 52.5 to 37.5 degrees) modified as the new default setting using CameraSettings.xml. Maps that were not previously compiled have been re-compiled for faster loading.
• Construction Yards can now use multiple build queues on structures and defenses for all factions. The Soviet faction can no longer use unpack time as part of the construction, thus the way a Soviet structure is building acts the same as the Allies.
• All structures and units will have more building time due to the multiple build queues.
• All vehicles will require power to be built. Tier-1 and some tier-2 vehicles need 10 power units, some tier-2 and tier-3 vehicles need 15 power units, tier-4 vehicles need 20 power units and epic units need 50 power units.
• Allied/Soviet power plants when built get 300 power units instead of 200. Japan power plant when built gets 250 power units. Soviet Super Reactor and Japan Power Core when built will get 1000 power units each
• All refineries prices reduced to 1500 (except Japan EOTRS at 2000 credits), but at a build rate of 25 seconds.
• The starting amount of credits in the Skirmish/MP menu is from a minimum of 5000 to a maximum of 100000.
• Allied Command Center (aka VIP Bunker) now acts like a power plant with 800 power units given when built.
• Added Allied Assault Destroyer to be buildable in the War Factory.
• Added Soviet Grinder to be buildable in the Naval Yard.
• Added a Soviet Myeche unit (cost 1600/16) which shoots missiles effective against aircraft and vehicles. This unit requires the Super Reactor and it only moves on land.
• Added a Japan EOTRS Scout Car unit (cost 600/10) which shoots anti-air missiles and can move on any terrain. It can also boost jump to another location. This unit can be built both in Naval Yard and War Factory.
• Fixed the pre-requisite, cost and build time for the Giga Fortress. Now costs 6000/30 to build as en egg and 30 more seconds when deployed for building on water. Build limit of these on the field is five. Experience increased due to easy killing.
• Re-modified and updated mod string defines. Also re-organized path coding parameters for mod compiling.
• Fixed the portrait icons of the Soviet Chief Scientist unit.
• The following anti-air objects get a 20% attack damage increase: Multigunner Turret, Multigunner IFV, Flak Cannon, Flak Trooper, Reaper, Myeche, Scout Car, Archer Maiden, Defender Turret, Striker VX and Sea-Wing
• Some single-player campaign maps will have a power plant for those missions that start with vehicles that use up power before building a base(s) and this also affects the co-op AI. This part is to be released as a separate download as a modified map pack later but still will be linked to this mod. This will be released by the time you read this.

A source code for this mod will be released as a separate package (by the time you read this) where it does not contain art, sound and video files from Uprising and part of the new content files.

This is my final news update and I wish you good luck with this final released mod.

This is the latest update for Red Alert 3 Reloaded.

The full 1.0 version is now released with at least a very few new surprises.

The Release is Nearing....

This is a modified map pack campaign for RA3 Reloaded version 1.2 for those players who are stuck in SP campaign missions with low power under a vehicle...

This is a partial public source code for this mod that I am giving away where it does not contain any art, sound, map, movie and asset files and also...

This version 1.2 of the mod contains both parts in order to play. Original release is back in Mar. 5th of 2013 where it was downloaded over 16500 times...

This part two contains the misc files. This latest and last version of the mod brings in a new AptUI, modified camera settings and some global changes.

This latest and last version of the mod brings in a new AptUI, modified camera settings and some global changes.

A RA3 mod with new units and new changes that changes gameplay to a whole new level.

I wish someone could make a mod that either removed co-commanders, or gave you full control over their forces.

When I play this mod I notice that the Empire AI can build Yurico from their barracks but I can't find her as a build icon in the barracks. Am I suppose to only have nine build slots or is there a way to get more?

There were mods which had 12 build icons, sadly the creator didn't uopdate thois one woith that UI fix.

Probably you can still build her with a keyboard shortcut.

Question, I like this mod a lot, but i hate the super/ultimate weapons is there a way that i could turn them off, Ive tried googling it and that got me nothing at all. Ive downloaded the revolution mod but that doesn't have the same stuff, Still a good mod tho, Ive also tried to put the reloaded mod in the revolution mod via the SKUDEF file and i liked that it had the 100,000 starting resources option but it didn't have the units or buildings from the reloaded mod, Tried the source code but... well i have no idea how to do that.

So basically what I am asking is,

Is there a mod/addon of some sort that will allow me to still enjoy the reloaded mod, but not have to worry about the darn super/ultimate weapons, and also maybe a mod that will get rid of the darn Power things, they dont really make the game fun, Just angers me when my brother blows up all my power with a bomb that i can destroy.

any help would be greatly appreciated :)

For anyone reading this... Hope what i just wrote actually made some kind of sense :)

Do you have any advise If I want to reduce unit cost for all fraction, Increase Health point, Increase fire power or anything like that without adding new unit

Can I work just only 1 mod to complete all of modified that I wish ?

Red Alert Uprising? If it works on that game htell me plss

Great mod, tnx for making it.

Yeah how is nobody not commenting on the fps limit? I still get 30 fps in then main menu and in game on every single map. Anyone else?

Great mod, some polishing needed and a dozen of more units and this mod kicks ass. Since the new update I have to write at least 150 character, which in my opinion sucks, but ok.