Unreal Tournament Role-Play, a multi-player game will focus on the daily life of people instead of deathmatch. In the final version you will be able to buy buildings, rent out rooms, be assigned jobs by an admin, make your own gang, become C.E.O. of most of the buildings, chase down players that commit a crime, rob buildings, buy a diner and make a profit or decline from wages from other people, buy guns at a gun shop, own a vehicle, have a job like a clerk, Army Private, Police Officer, gang member, hotel manager, diner manager, and much much more! This is a game of limitless ideas and is loosley based on the role-playing modification for The specialists mod for half-life. There is no real storyline to this game but that's because you can choose your own destiny, starting out as an unemployed piece of garbage with potential to be the richest man in the city or the top of the police's most

This game will be set in a fictional city called Los Reyes which will have a waterfront atmosphere. The city will have all the essential building's and business in a communty and more. There will be places for ammusment (bar, paintball, shooting range), Places for protection (Police station, Bodygaurd agencys), places to eat ( Diner, Burger Joints, Supermarkets and five star restaurants.), places for your gang to hide all over the map and also many more buildings in the community. One of the biggest features is how this game will be partly run by the community, we are open to all ideas you wish to offer and will make changes to the map if you suggest them.

Some unique features include:

Well, its November so I would like to discuss current events relating to our mod. The first thing is the first public preview of this concept art. This concept drawing done by Xero shows two civilians hanging out on the streets of Los Reyes, our main city map. The second thing is this gun model done by one of our modelers, kLoNe. 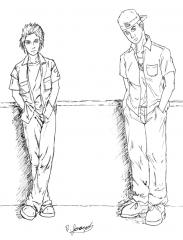 There have also been interesting events over the past week. The owner of the mod copying us, Sacrator replied in our own forum. You can see the full discussion at Boards.gabionstudios.com In addition to that, one of our modelers, kLoNe, has begun working on a new car model. Those pictures should be out soon in the coming week or so. Xero is working on a new concept drawing which should also be out soon enough. We have also gotten a shoutbox and a dynamic design document system online. All in all, things are flowing quite nicely around here and we hope that it continues to be like that.

Until next time,
Minimum

I thought I should release this to the public ASAP. We have multiple sources of proof that includes Sacrator's lying tactics. Read up on it at This...

Alright, major things have happened in the last month. First, we lost our Co-Founder RichardL. He left because he wanted to go make his own mod team...

Hello everyone, we are all very busy with out lives at this time because school's starting.. (September 5th for me), but don't worry because...

Alright, heres the update on the mod. With UT2007 pushed back to next year we can't do really anything but model until then. That helps us and hurts...

Yeah, this game died off nearly 3 years ago due to a huge scandal between two teams. It was childish on both teams' parts.

I recently revived Gabion Studios, but with another objective. We will eventually do RP again (sometime in 2010), but not for UT3. =\

This mod isnt dead is it? It sounds to be a really great mod, keep it up and please dont tell me its dead !!!

You guys are so girlish,

even if that model isnt theres, so what?
We have to be in honest to ourselves, we have all said we have done somthing we havent.
And personally i wish you guys the best of look with your mod. Remember to check out UTX Forums in a my sig for some help at any time ;)

Everyone has voiced there opinion - now for the sake of sanity, please allow this mod team to continue making their mod without continued interuptions!

hes ex staff and a long time member, he may be a *** but its not going to get him banned.