A new way to experience KotOR II, The Sith Lords Massive Improvement Mod will reskin nearly the entire game, including characters, modules, dark side transitions, and 8000 pixel wide skyboxes. In addition, new visual effects, lightsaber hilts, menus, sound effects, and HUD are planned. Nearly every texture will be resized at least twice its original size, and most commoners will now have unique appearances. Major new details about the coming coming within the next few weeks. 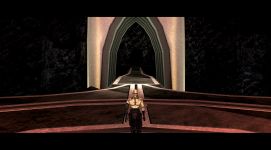 The reason for the lack of updates lately, to be honest, is that I hadn't actually done anything for quite a while. About a month. I know it's a bad excuse, but I just didn't "feel like it", and I've been busy with several other Star Wars projects, including a Knights of the Old Republic fanfilm titled Revelation - which is not done in the ordinary game-capture way. But this week I decided to just put my focus for now on this mod.

There's some new major plans as well. I'll be having new cinematics in the game, such as for the Devastation of Katarr and Atton's past as an assassin. I'll be using a combination of differenet elements for these, not just game captures. In the deleted Nihilus vs. Sion scene, for example, you will see bolts of lightning shooting through Sion when Nihilus sends Force lightning towards him as you saw happen to Mace Windu in Episode III: Revenge of the Sith. Not done through the game engine.

I have also set up a Livestream channel to have news, previews, live gameplay, and live modding for TSLMIM. Any previews and trailers will appear there for the first time. Expect a new video update soon.

Finally, do not expect the mod to be released until after a trailer is uploaded (to clarify, not just a preview, a trailer).

New images and details on upcoming releases and progress.

Find the answers to frequently asked questions concerning the mod.

Any way to get a download link for this?

moddb should change their policy ,so only genuine mods get shown here.

Or at least have a disclaimer in the browsing that states this mod is dead.

Come on plz update this we love all these mods dont let it die. Plz keep it going

Why do almost all the KOTOR 2 mods here have no download?!?!?! FileFront wont work either!