UPDATE: (mod title) is dead but I'm remaking it. I stopped modding in September because I got bored and now I came back. Probably going to leave again. I made new progress between the last update and now, and I think that the last part of the map is very beautiful compared to the crappy start. There may be errors and a crappy button, but it's dead and I don't remember what I did, so I just compiled it and fixed the annoying bugs. The last part was meant to be dark and spooky but it ended being too bright in some parts and too dark in others. I think that this new update has: 1. New vortigaunt and human grunt models. 2. Spirit of half-life 1.54. Difficulty levels should be like Doom or any old fps (More enemies on harder difficulty but same damage). Vortigaunts are supposed to be allied with grunts with the "Behave as" thing to "Human military" but they still kill themselves. 3. New menu music (Doom e1m7). 4. Another secret area 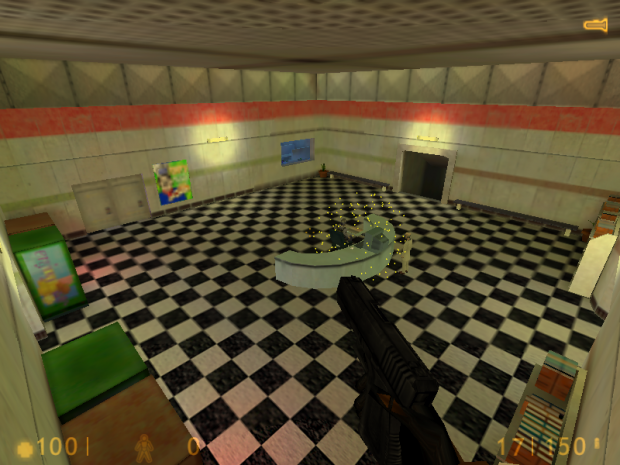 This part comes after image 2. A reception with some sodas, libraries and a pizzeria. You can see the barney with those yellow particles. It didn't happen when I used zhlt but after changing to vhlt, it happened. It shouldn't happen because of the tools since the yellow particles appear when an entity (I think just monster_x entities) is stuck im a brush, and when I try to move it to the left, the yellow particles dissapear but when barney moves, the chair doesn't move, has delay or something but it doesn't move when barney moves. The stairs and the boot camp part will be made after I make the base that protects the acces to the first button. At the left, it will be the teleporting room, it's unfinished because I want to make it when I have more expierience so it's just some computers and a teleporter. And finally the pizzeria, it has rare lighting and you wont find health or ammo, just a scientist speaking to a guard and 2 scientists eating in the other room. There's a conversation between a scientist and the reception guard, the scientist says the line in Blue Shift were he can't acces his files but the scientist won't say it even with the interrupt speech flag. The same happens with the guard's line in the pizzeria, it should say the line in Blue Shift that he says after the can't acces my files one.