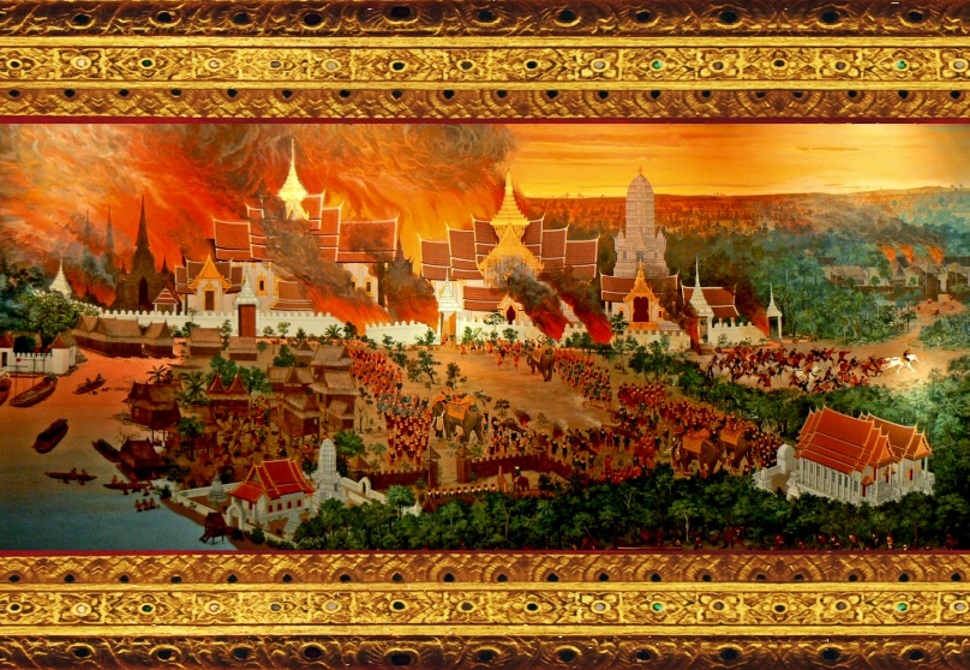 "We, Portuguese, set sail for years from our beloved homeland; risked our precious lives against the dread of the endless ocean. However, by the love and kindness of Almighty Lord, we were miraculously fated to find this new world where none of us ever set foot on before. We were told by natives for its name, Suvarnabhumi, the name they called; the name in our tongue means for the land of gold.

In the name of Mighty Lord and Jesus Christ, our Christianity seemed to be destined for spreading in this Far-East land. With blessing of the Lord that bestowed the courage upon our handful troops, we were able to capture Malacca from the Muslims during the era of Dom Afonso de Albuquerque. However, those infidels have still not given up yet.

Alauddin Riayat Shah II of Johor, the throneless king of Malacca, formed the army of Muslims and made alliance with the rulers of neighbor Islamic States in order to drive us out of this land someday.

Far into the mainland, amongst the chain of heaven-piecing high mountains, dark forest, and wide torrential rivers which flow from further north, two kingdoms have stood for hundred years, Lanna and Lan Xang Kingdom. For centuries, they have maintained their glory and peace from the old day; especially Lan Xang under the rule of King Setthathirath the Wise. He has eventually forged his kingdom mightier than ever. On the other hand, everything seems to be shrouded in the darkness of abyss.

After the deth of King Tilok the Great, Lanna Kingdom has not been as great as she used to be in the past. Due to the usurpation amongst royalties and nobles, Queen Jiraprapa has to bravely bear the burden of ruling the Kingdom despite facing the threats from internal corrupted nobles; and fearful external invaders who came from every direction. One of them is the mighty kingdom from the central plain, Kingdom of Ayutthaya.

Kingdom of Ayutthaya is the wealthiest and the most prosperous state in the mainland. Now the newly crowned monarch, King Chairacha, the warrior king intends to march his military forces towards all Suvarnabhumi states; Ayutthaya thus will be renowned in the minds of the neighbors for its power. This king wisely accepted our military service for the dreadful firepower of our invincible arquebuses and cannons.

Nevertheless, despite its strength, Ayutthaya is not the only one who desires to be the superpower of Suvarnabhumi...

There is a mountainous kingdom located in the southwestern part of this golden land. A young king named Tabinshwehti who is also well known as Black-tongue Mentra crowned himself to reign the throne of Toungoo; despite being only fifteen years old. He claimed that he has the rights because of being a member of the lost ancient dynasty. He announced the rightful rule over Burmese, Mon, Arakanese, and Tai states. Furthermore, he also intends to crush Ayutthaya under his iron fist.

Khmer Kingdom, a state once an ancient empire that ruled over all Suvarnabhumi states in the past, is now ripped off her ancient power by Kingdom of Ayutthaya. The once immense and mighty kingdom is now nothing but only minor provinces. Under the depression and disgrace that the Khmer king endured, he himself is dreaming of vengeance and reclaiming the long-lost power.

Far into the eastern land, a dragon kingdom named Dai Viet; the great kingdom that previously ever beat down Ming army many times, is now divided into twin kingdoms by a civil war between Lê and Mạc dynasties. Both of them thirst for being the only mandate of heaven in Dai Viet realm.

We traveled to the edge of the world with hope to avoid the war in Europe and to seek out prosperity and fame in this far away land. We will see whether this land deserves the name Suvarnabhumi, the land of gold, or not. 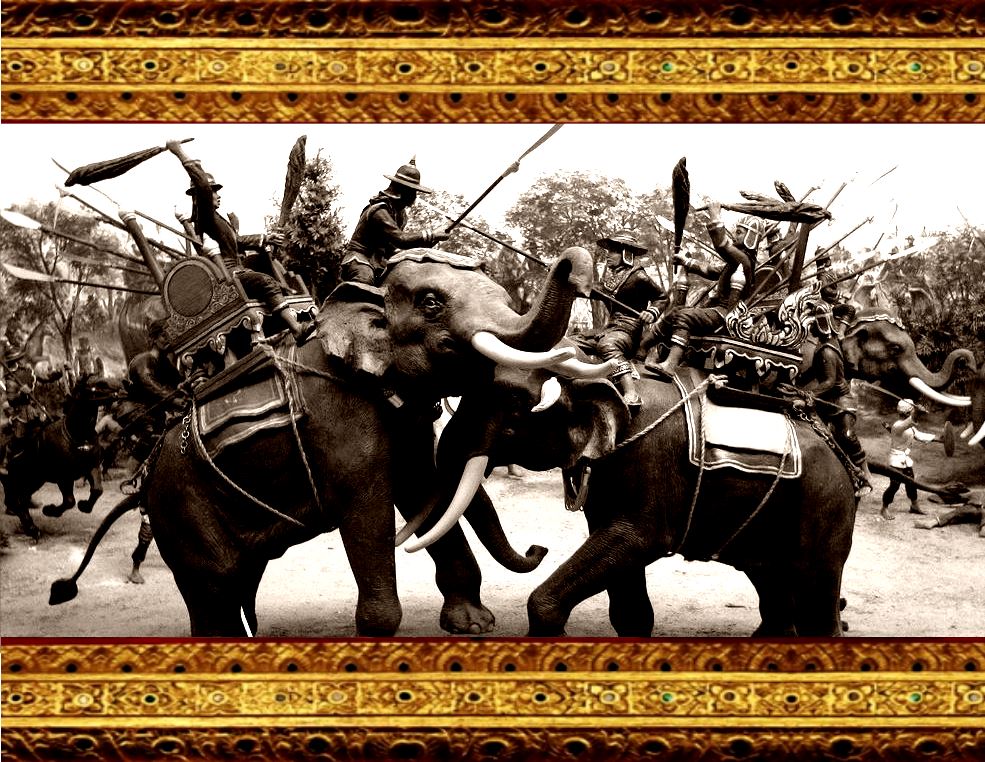 Suvarnabhumi Mahayuth 1.16A + Hotfix 1 Patch for All OS platform.

- Change Warcry Botton from B to V Button.
- Warcry (V Button), scares away enemies surrounding you that are lower level than twice your level for a short period. Very good for getting out of a tough spot as an infantryman (and followed by Sprint), or scattering an infantry line as you charge them on foot or horse.
- BATTLECRY (U Button), rally your wounded troops to fight and recover their hitpoints (3xLeadership+Charisma percent)
- Spear Bracing (B button)

Known issues:
- War Elephants has very small hitbox (bone) and low charge damage.
- If you play as a woman and equip some Vietnam armor your character body will invisible, Example Mac Tunic, Le Tunic.
- Sometimes the sound effects are not working on town,siege scenes.

1.16a Credits:
Remove lances in assaults By Rongar.
[OSP][code] Grenades and Explosions Originally by Beaver Improved by ScreamingCommie & DuskVoyager.
[OSP] Camel Kit! - Makes horses react to camels by Zarthas.
lords can build upgrades to their settlements by Fire_and_Blood.

Suvarnabhumi Mahayuth 1.16A Patch + Hotfix 1 for All OS platform. Not save-game compatible. 1.16A Hotfix 1 Changelog: - Re-balancing Le dynasty and Portuguese...

How to have your own banner

Hey, I am using Linux, the font in the game does not seem to work. ask 4 email if you want a screencap

Please make this mod for bannerlord!! I cant even imagine how gorgeous it would look and many functions might work better..

Is it possible to add Custom Troop Trees mod to this mod? I want the guards in the town I captured to change to the player culture instead of remaining their original culture.

I set it to player culture, my towns and villages I can recruit player culture troops, but the town guards are from the original culture. It bothers me.

Otherwise, I love this mod.

Considering how old this mod is, I'm surprised at the good quality of it! I just saw it on a Koifish video and it looked rather pleasant, and so I came here to look at some previews. So far it's much better than even some new mods in the DB. I know this is like 7 years late, but good job!

how do i get more armor to show up when choosing my army's armor, like the infantry and peasant, I'm stuck because it might be the culture, but stuff like the morion, arabian, and vietnamese helmets are showing up. I just want to have the chinese boots for each unit too, but that doesn't show up on a few

Once in a while a mount and blade mod comes along that perfectly illustrates the time period/setting. Brytenwalda, Gekokujo, Anno Domini and many others come to mind when fondly thinking of these great adaptions. SM (I cant pronounce nor memorize the name) may not yet be as exstensive as those masterpeices however ill be damned if it isnt one of the best and most interesting mods ive ever played. In this modern mount and blade modding age of half baked mods that just put a shitty reskin on native…