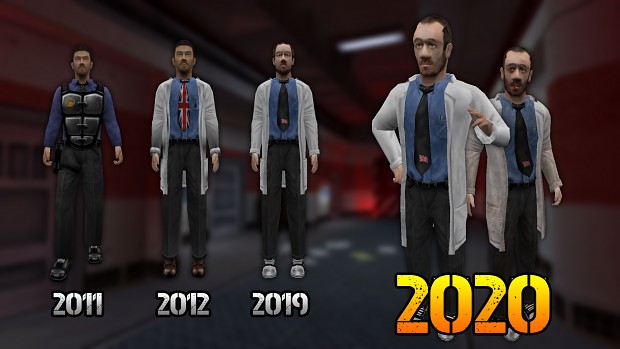 I like the union jack pin better than the full tie, looks more professional and is just subtle enough to look like a real life type thing.

You are one of the developer of ZM Reborn :O

It just made me scroll through the whole palette of media you released throughout the years dating back to 2008!

Love the designs, so is Dr Morris the protagonist or what?

He is not. He's a support character along with Archie.

"The Core is a classic retelling of the events surrounding the Resonance Cascade disaster from a new perspective; that of Engineer Maurice Andrews." ;)

Ah right. Thanks for telling me. Keep up the good work, Nebula.

Any chance of him being similar to guards or the construction worker in Echoes? such as giving duties

Fairly similar yes. He gets the player back on his feet and provides him with tasks required to get out of the facility. Occasionally the player will need to escort him briefly, but these sections are designed to be as short and as free of frustration as possible.

Dr. Urby Morris has gone through a number of versions over the years, from his low definition beginnings pre-2010 to some terrible potato faced horrors as seen at the end of 2019. This post marks the absolute final rendition, heavily edited and sporting a "clean" version seen in the early game and a more dishevelled Urby who is seen much later in the campaign. Here are some of the key moments of his model's development.

Pre-2010: (Versions 1 and 2 / Not pictured) Starting out as a reskinned HD scientist, the early versions of Dr. Urby quickly looked outdated once the detail in the mod ramped up.

2011: Badass Dr. Urby (version 3) was the result of a model I had made for a previous project. Swapping out his labcoat and microscope for an armoured vest and a sidearm, this version would have assisted the player through some of the mod's tougher battles. Ultimately replaced by Archie as a security officer, this version was dropped before any lines were recorded.

2012: Dr. Urby (Versions 4 and 5 / V4 pictured) stopped playing soldier and picked up his labcoat. He searched for his microscope, but it appeared to have been stolen during his brief moment of madness. This version of the model had some lighting issues caused by a messed up compile. Version 5 corrected this a year later, after it was pointed out in a media release.

2019: Dr. Urby Morris (Version 6) was the first attempt at making the character feel older and more weathered. As such, I used my actual head as a reference. However, the job was rushed and the result was a potato faced monstrosity with terrible texturing, UV mapping and mesh issues to no end. Died from asphyxiation caused by his own mangled face.

2020: The ultimate Dr. Urby Morris with some actual care and attention put into him (finally). Following the same principle as the previous version, he was modelled to more closely represent me. The base mesh was a better fit, the textures were fixed up and the result is... delightful? Sure, why not...