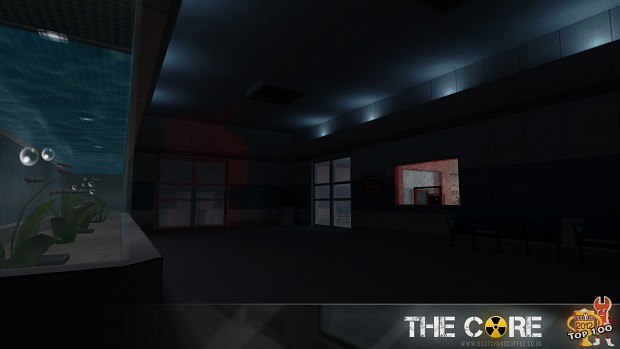 Isn't it too dark?

Thanks for the input. The booth actually fills that corner so it's as close as it can be. I'll get that window moved though.

This is just amazing.. But is this using the source engine?

Oh wait. Gold Source. That really is the engine for Half Life 1. I went and googled it for myself. Seems like Half Life Source used the Source engine. THAT MAKES YOUR WORK QUADRUPLY MORE AWESOME!

Man... This is really great! But I have a suggestion, two maybe. First, maybe put some carpeting down? Second, add some light bulbs to those lights on the ceiling. Again, GREAT WORK!

Those blocks in the ceiling are vents.

Also, this is a busy hallway. Linoleum flooring is much easier to clean than a carpet.

By the time Andrews reaches the central complex dormitories, the place is infested. The small, cramped living quarters of the low level science personnel have become a series of tight, frantic combat zones.

The grunts, now left behind by their retreating comrades, are fighting a losing battle as the Xen forces pour into the facility in greater numbers, annihilating everything in their path. Meanwhile, science team members seeking refuge in their dorms are falling victim to the large number of headcrabs that are now themselves scurrying into the relative safety of the lower levels to nest.