First of all,Terminator V1.7 is a mod for Men of War Assault Squad 2 3.112~3.122.So if you don't have a AS2 of proper version,go get one.
Terminator is a mod meant to be the best single player MOW WWII~post-war skirmish and FPS mod.Unlike most MOW mod which collect a great amount of vehicles for MP use, this is a SP mod. And unlike most SP mods which just make maps similar to the offical ones that you can only fight as specific faction A VS faction B (like USA VS German) that its developer designed to the end of the time, this mod provides you with fully customizable skirmish that you can always custom the battle with whatever era or factions you want, you can have different experience every time with the same map.
This, is Terminator.
My mod contains but not limited with 5 parts:
1,Fully customizable skirmish that you can customize the type/ear of the battle(infantry battle/specific start ~ end time of the battle),factions of each sides(player,player's ally,enemy and enemy's ally) for both official campaigns and new SP maps added in mod;
2,A game management menu which contains sub menus for a lot of useful functions like collect ammo from corpses and distribute ammo to your infantry,change weather,turn off airstrike,delete vehicle wreckage,turn on/off medic auto save fallens,upgrade tank,towing disabled tank,borrow mp,switch to ally's reinforcements,buy a random light/medium/heavy/monster tank;
3,Other AI and funtions that automatically happen in game which would help you or your enemy;
4,Fully customizable fps-tank-battle;
5，About 250 new vehicles,3 new factions(China,France,Hungary).

Because the description is limit with only 10000 characters,so this description is just a very simple overview.It's very very important to read the readme once you download the mod.

1,Fully customizable skirmish,this system works for both official campaigns and new SP maps added in mod(original MP maps now use as SP maps,located at Bonus).It's fully functional with new SP maps so that's what I suggest you should at least have a try,it's less functional with official campaigns.Which means:
Customize the type/ear of the battle,this system works for new SP maps only;
Customize the factions of each sides,this system is fully functional with standard skirmish(I mean each faction's 2nd,4th,6th map,like Caen,Sthilaire and Market-Garden of German campaign) and new SP maps,in these maps ,you can set/change the whole 4 factions;it's less functional with other official campaigns(like Gazala,Pomerania of German campaign) that you can set/change maybe just 2 or 3 of them,for example,in each faciton's 1st map(like Gazala of German campaign),you can set/change player and ally's faction,but not enemy or enemy's ally.
With customize the factions of each sides,now you can be any faction fight any enemy in any map,for example,Overlord is a official USA VS German map,but no longer.Now you can play USSR VS German in this map,or German&USSR VS USA&UK,or even German VS German if you’re crazy enough,etc.
The pictures below shows USSR VS German: 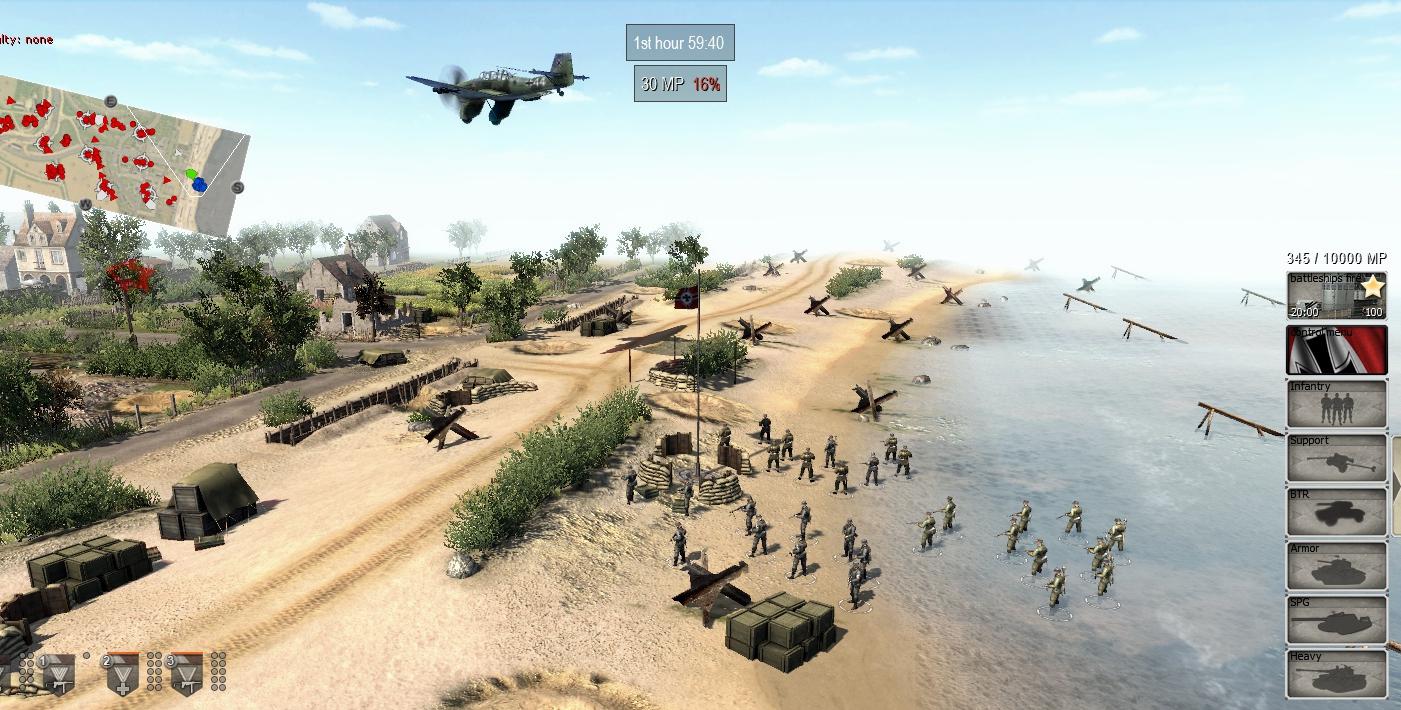 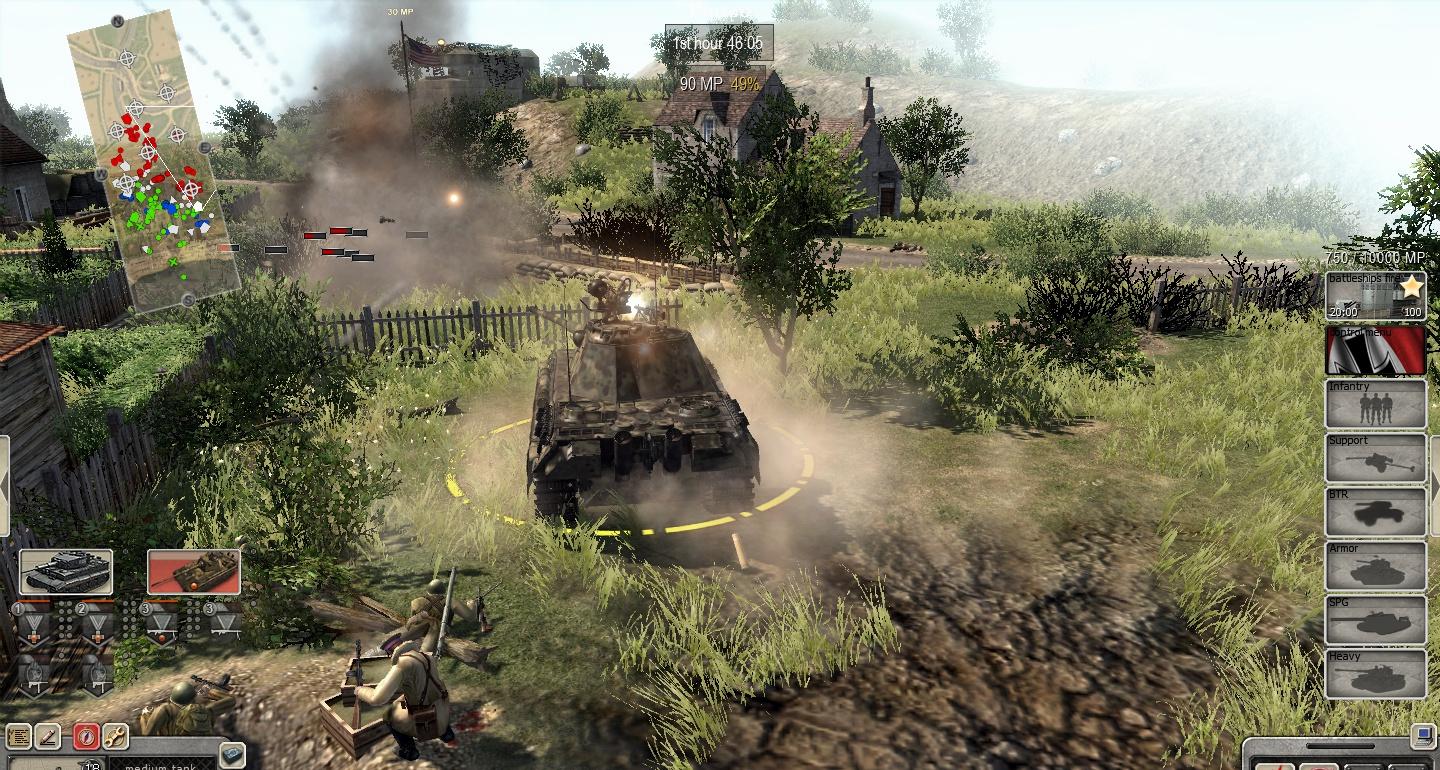 In new SP maps,you can even customizable type/era of the battle,like a infantry battle without any tank and heavy artillery,or a specific start&end time battle so you can enjoy the best era for you or your favorite tank,like early-war is KV's era,or mid-war is Tiger's hunting ground,etc.
In normal skirmish,jeep is almost a toy,but in infantry battle,jeep and APC(like Sdkfz251) are the only combat vehicles for you and the enemy therefore they're much more valuable. 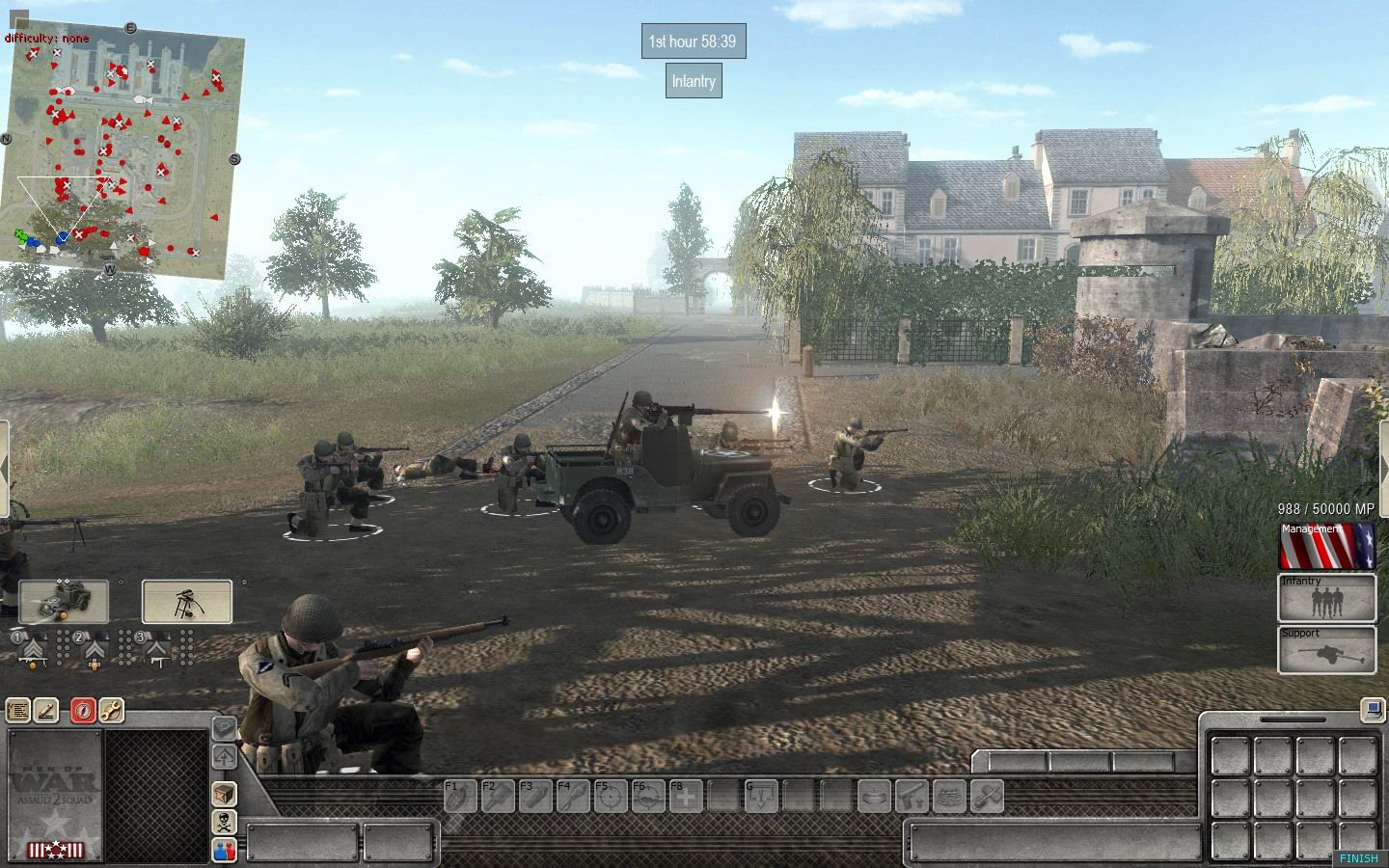 If you choose post-war as start time,then you'll see monster tanks like IS-7 in your reinforcements immediately after the battle begins,cut out the middle era. 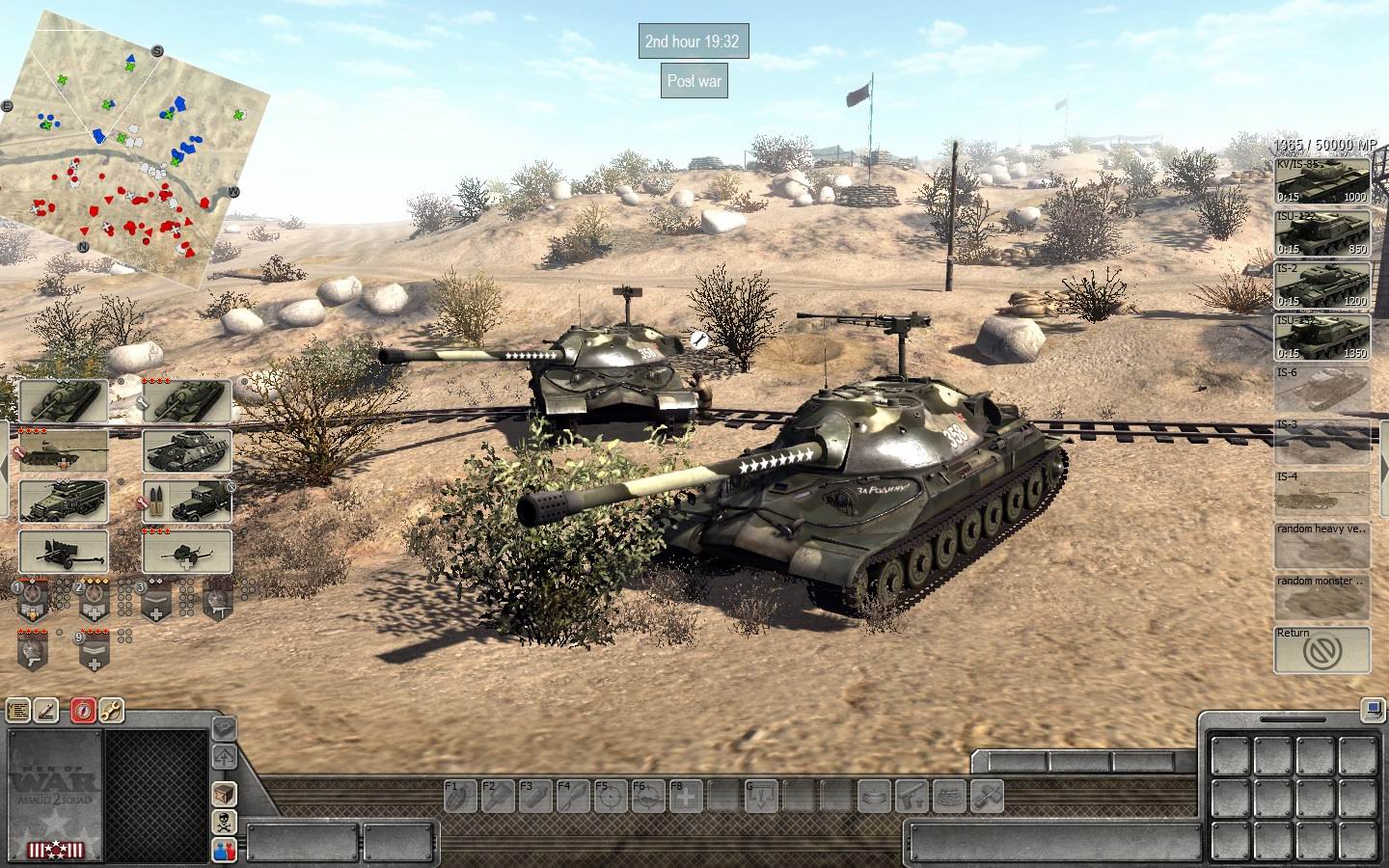 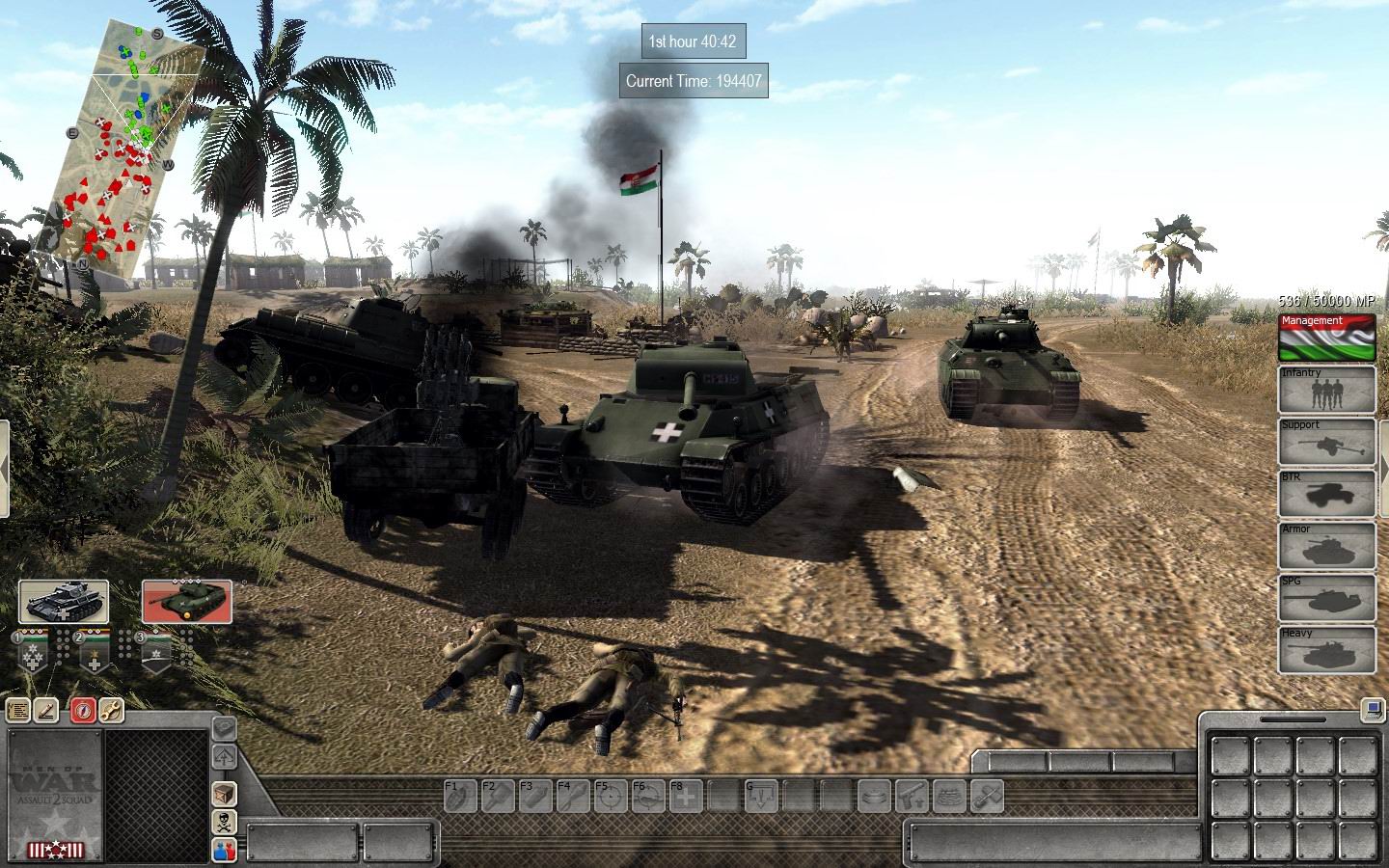 If you limited the end time,then there won't be any later-ear tank involved.So a early-war battle means the best tank is KVs,happly KV's year. 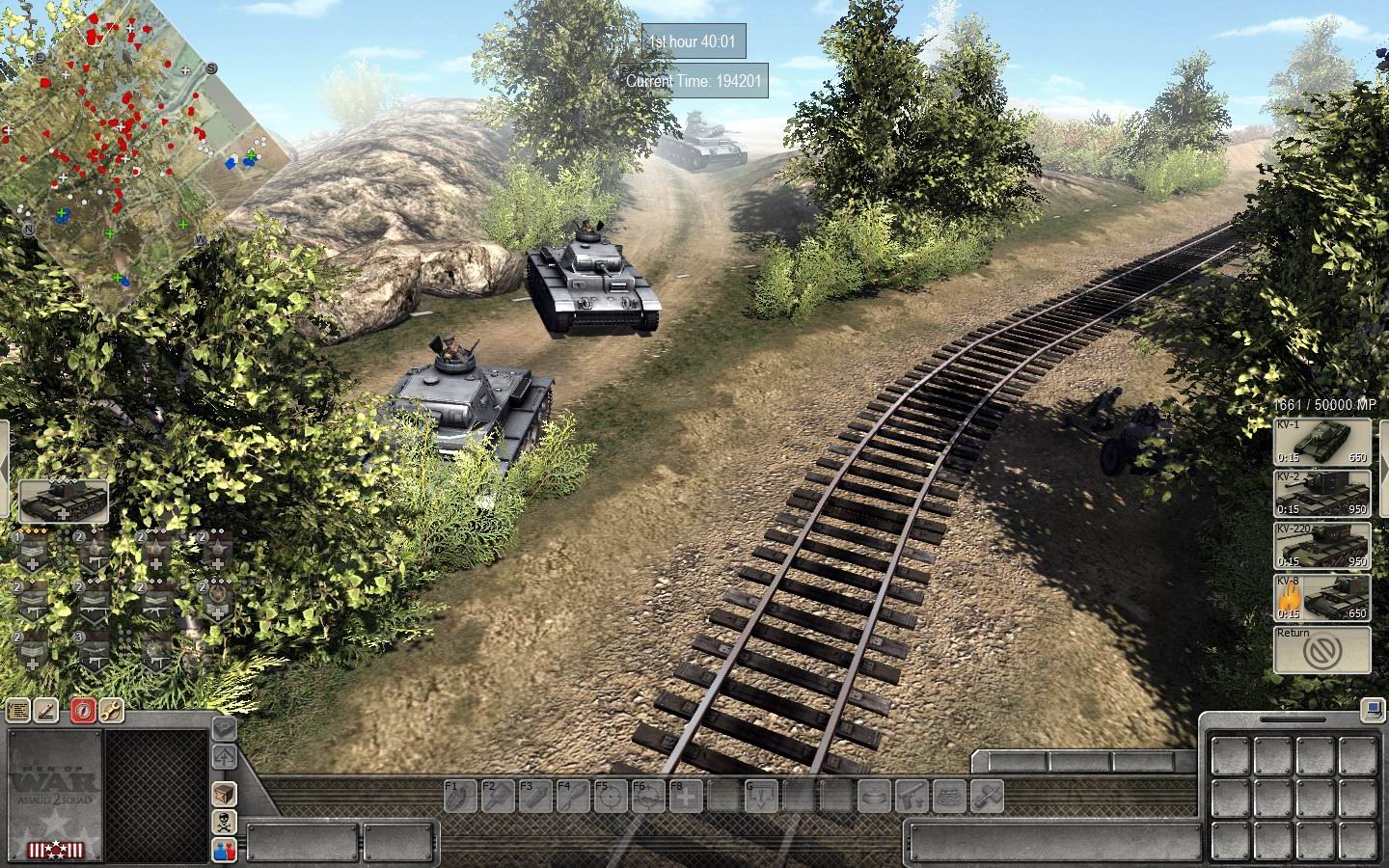 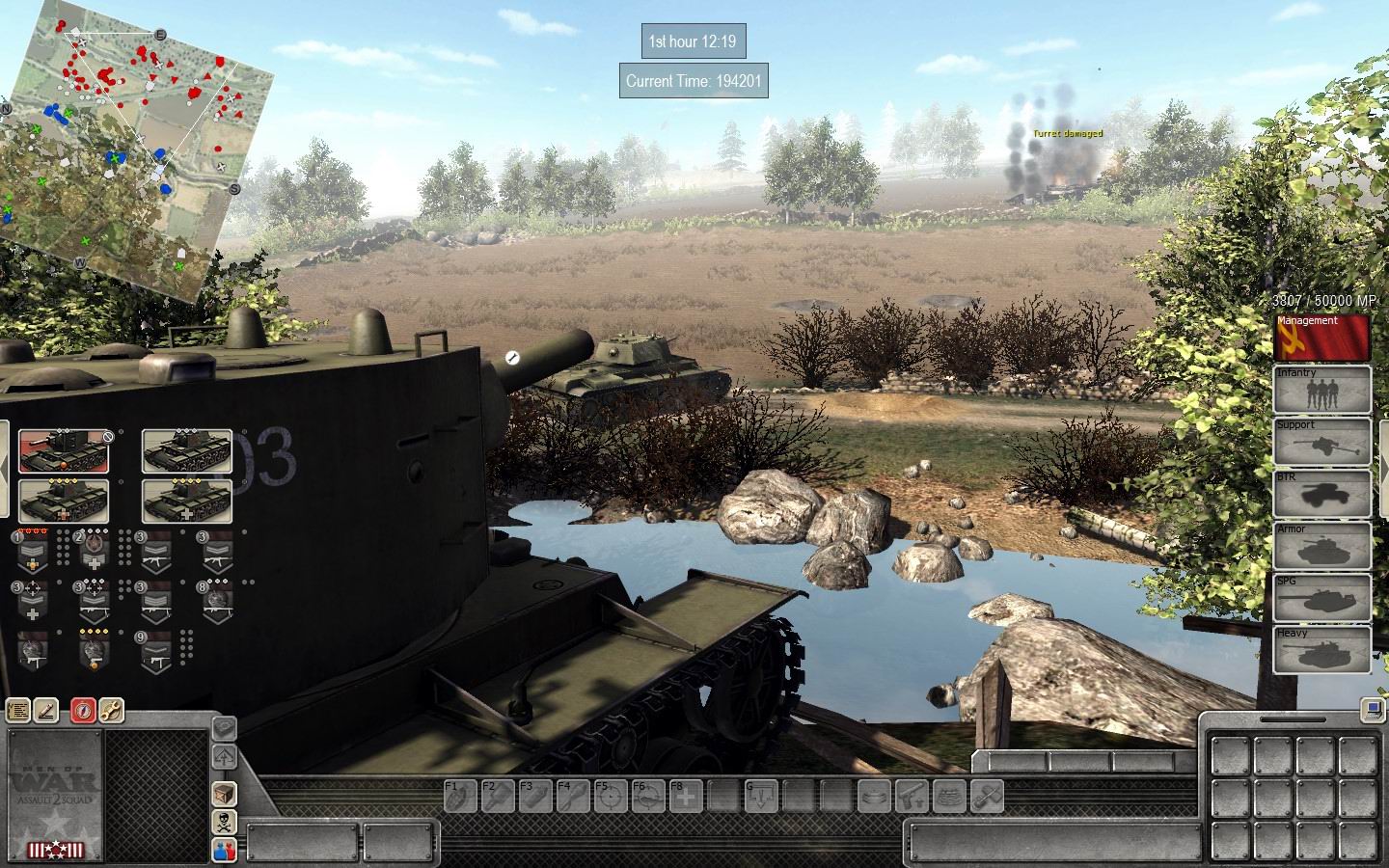 2,Game management menu,or you may call it flag menu.This menu leads to a dozen of sub menus for a lot of useful funtions.

Among these functions the most important one is Infantry ammo resupply (the truck icon one),you can continually use this function to automatically collect ammo from corpses and distribute ammo to your lack supplied infantrys with a vehicle as middle-man(or middle-warehouse ).This function both saved your time and the ammo of the corpses.
For example:in the picture you can see a lot of corpses near my KV-1.

KV-1's inventory before the system works:

Other useful functions include auto-medic;
Upgrade tank like in the picture below that I upgraded a IV H to IV Schmalturm: 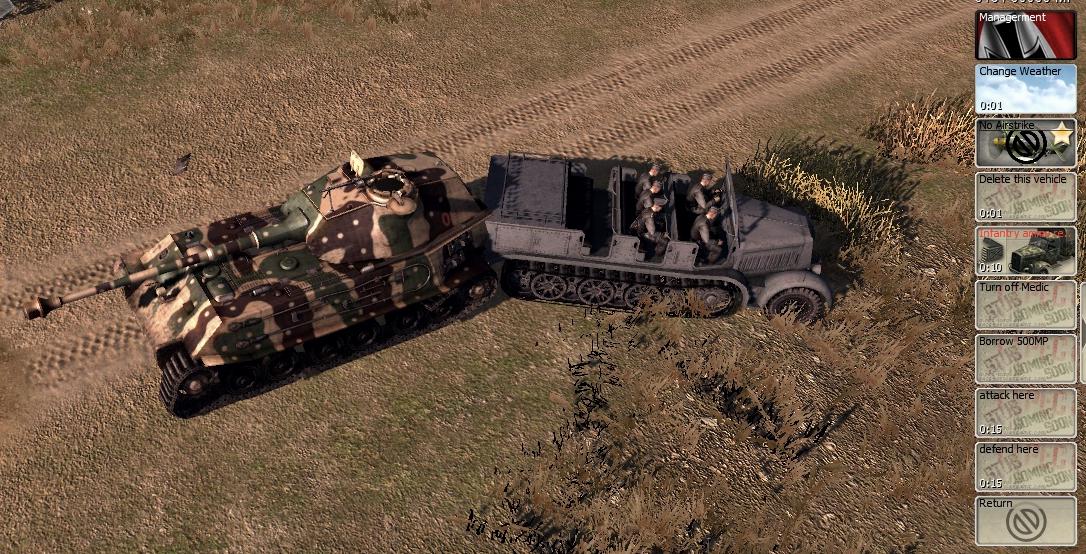 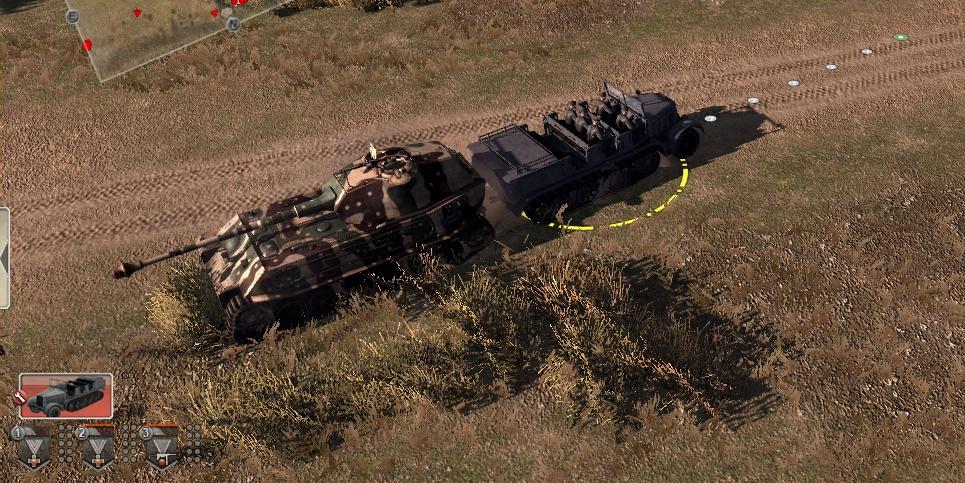 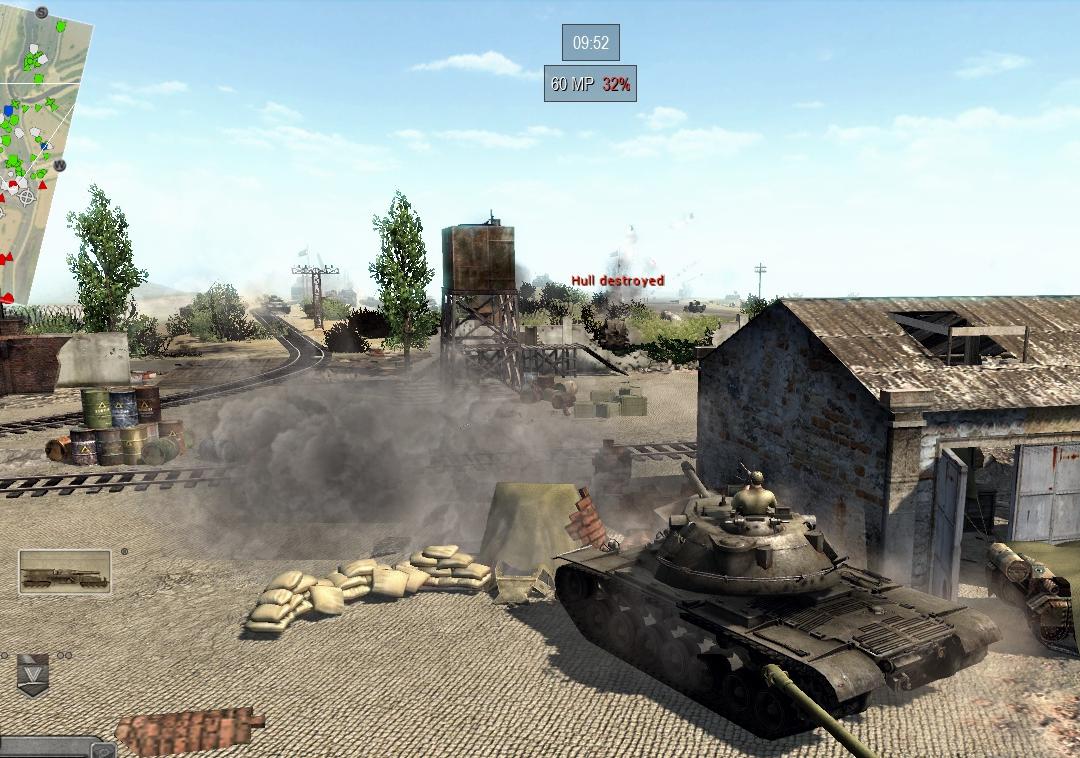 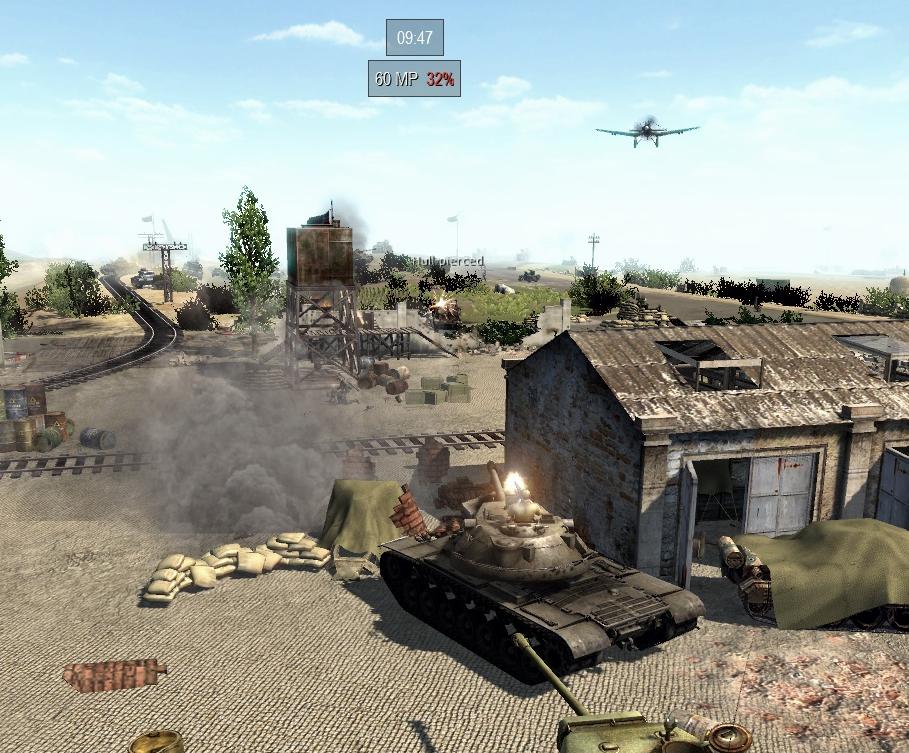 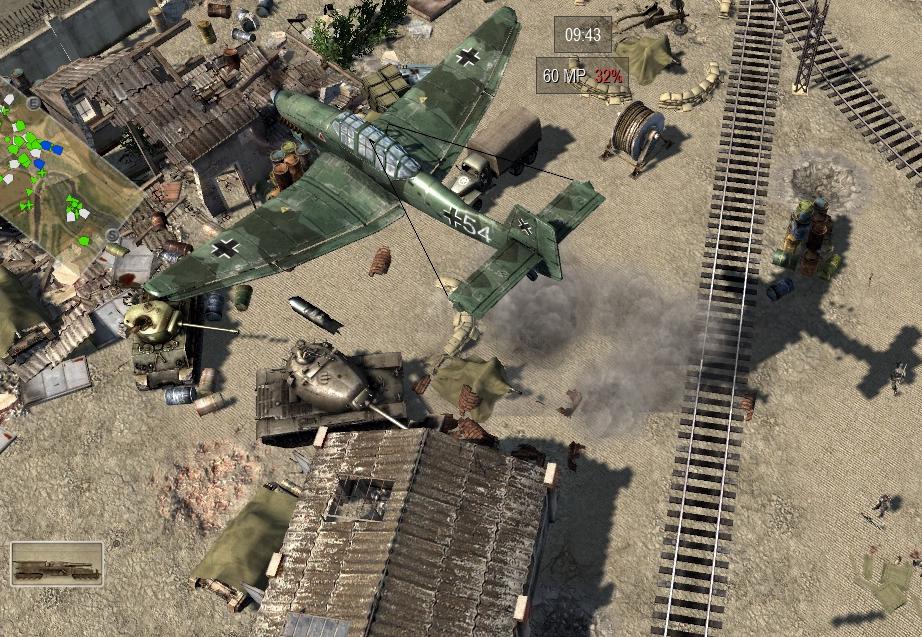 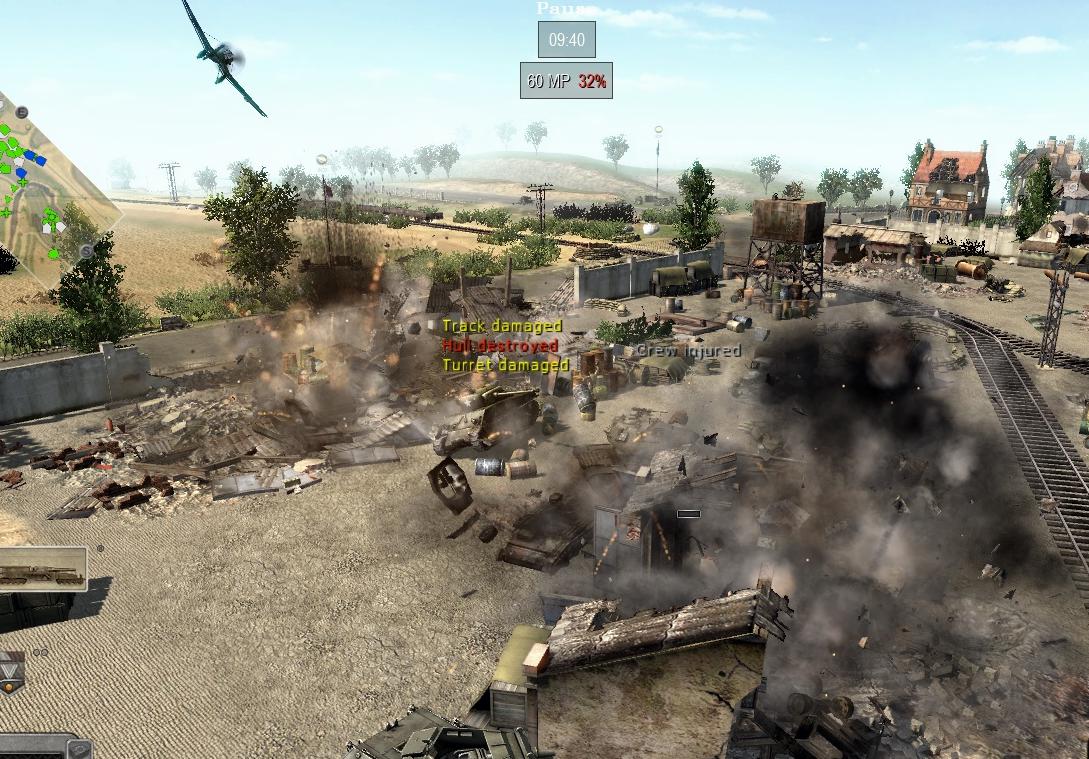 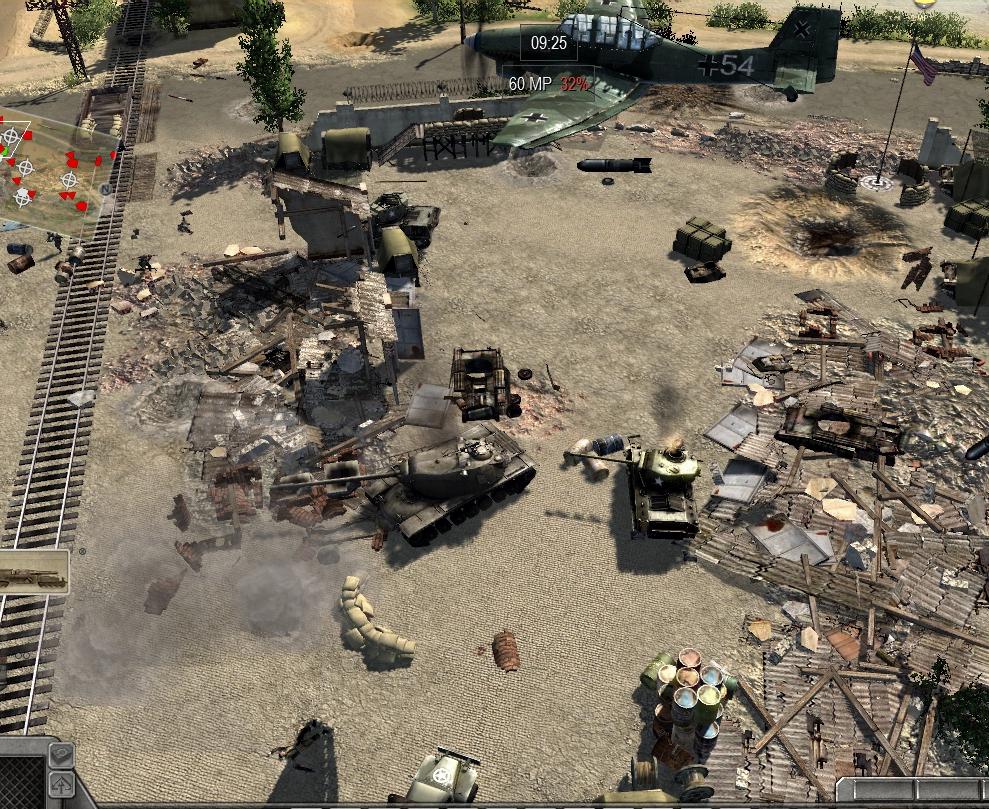 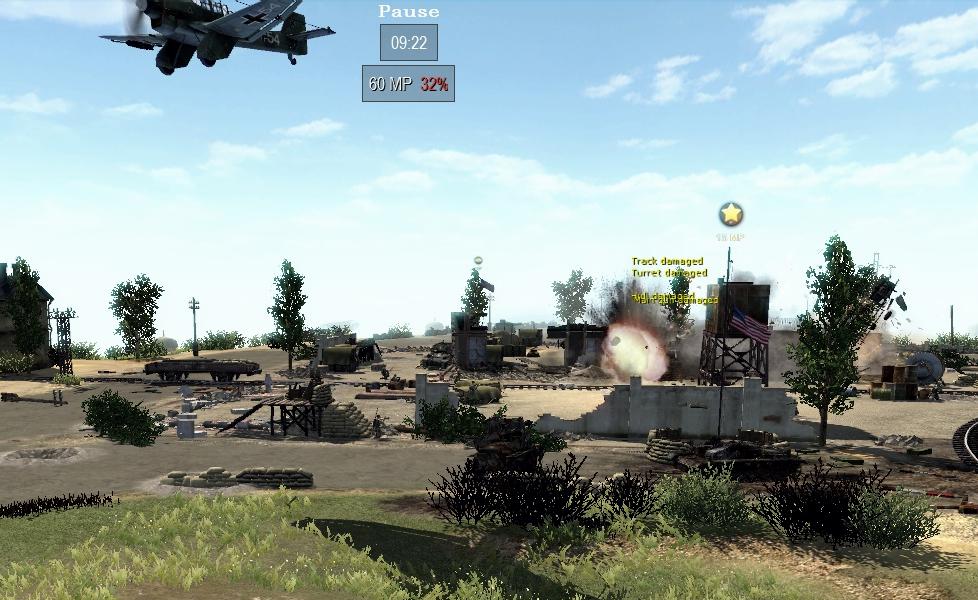 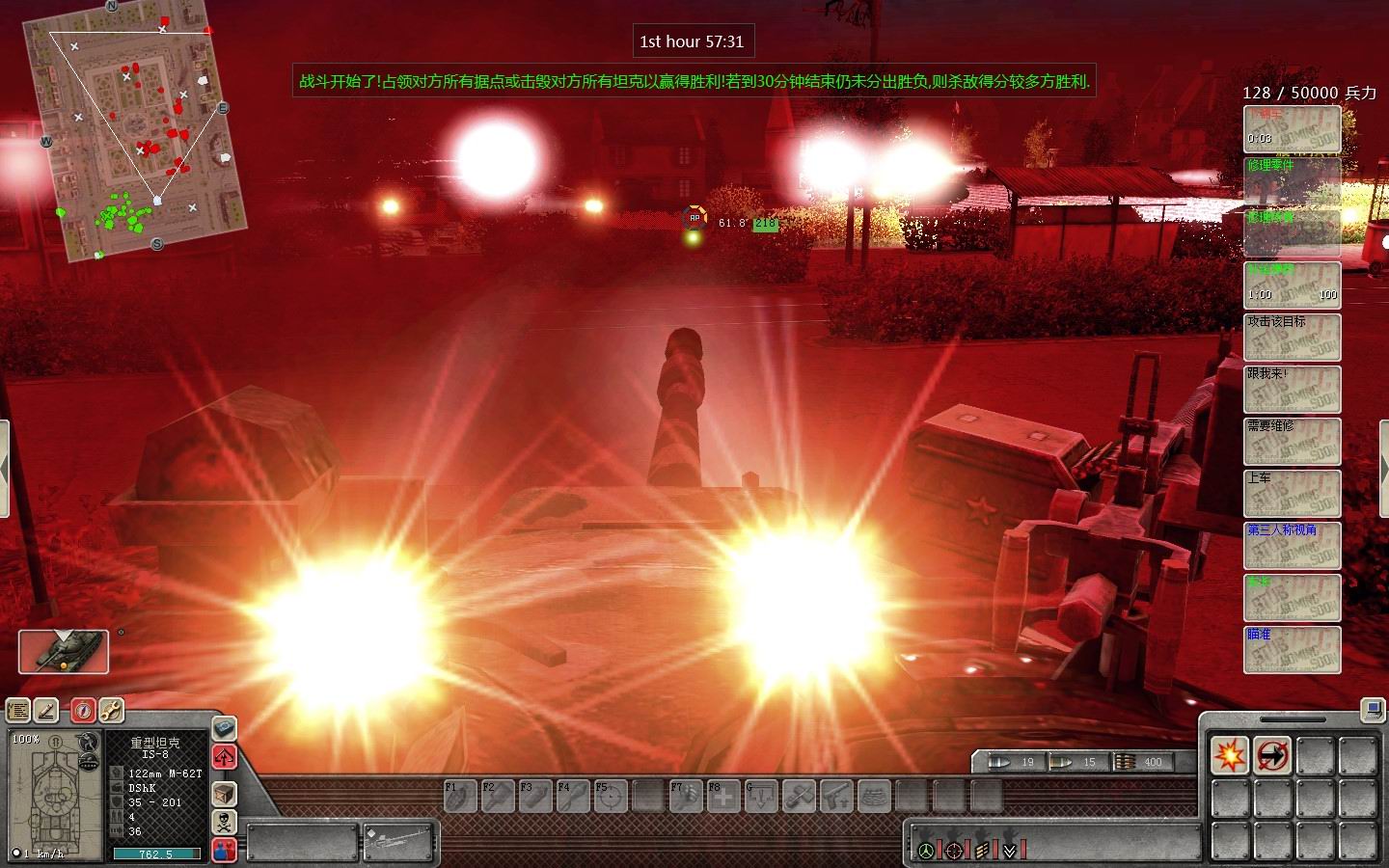 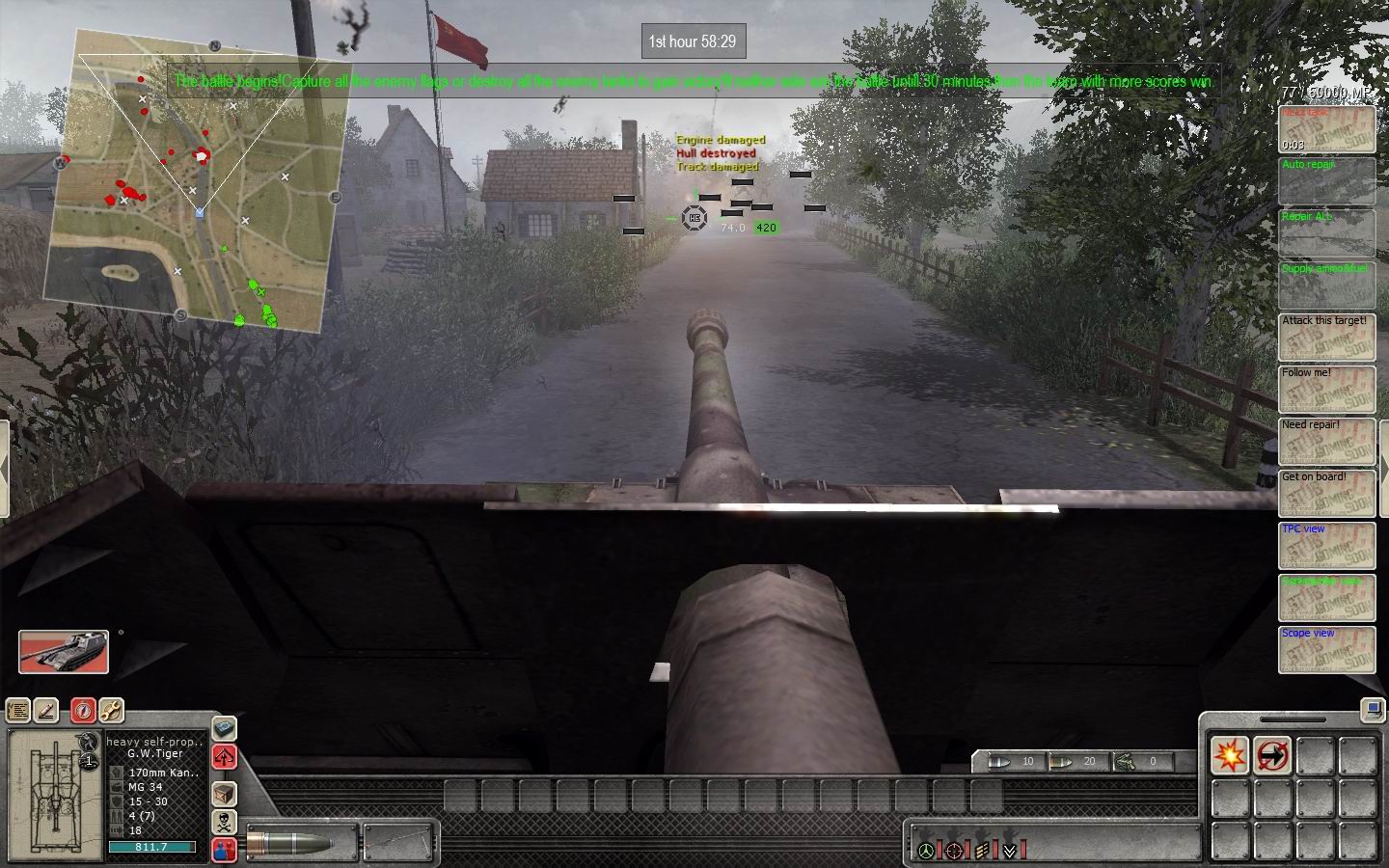 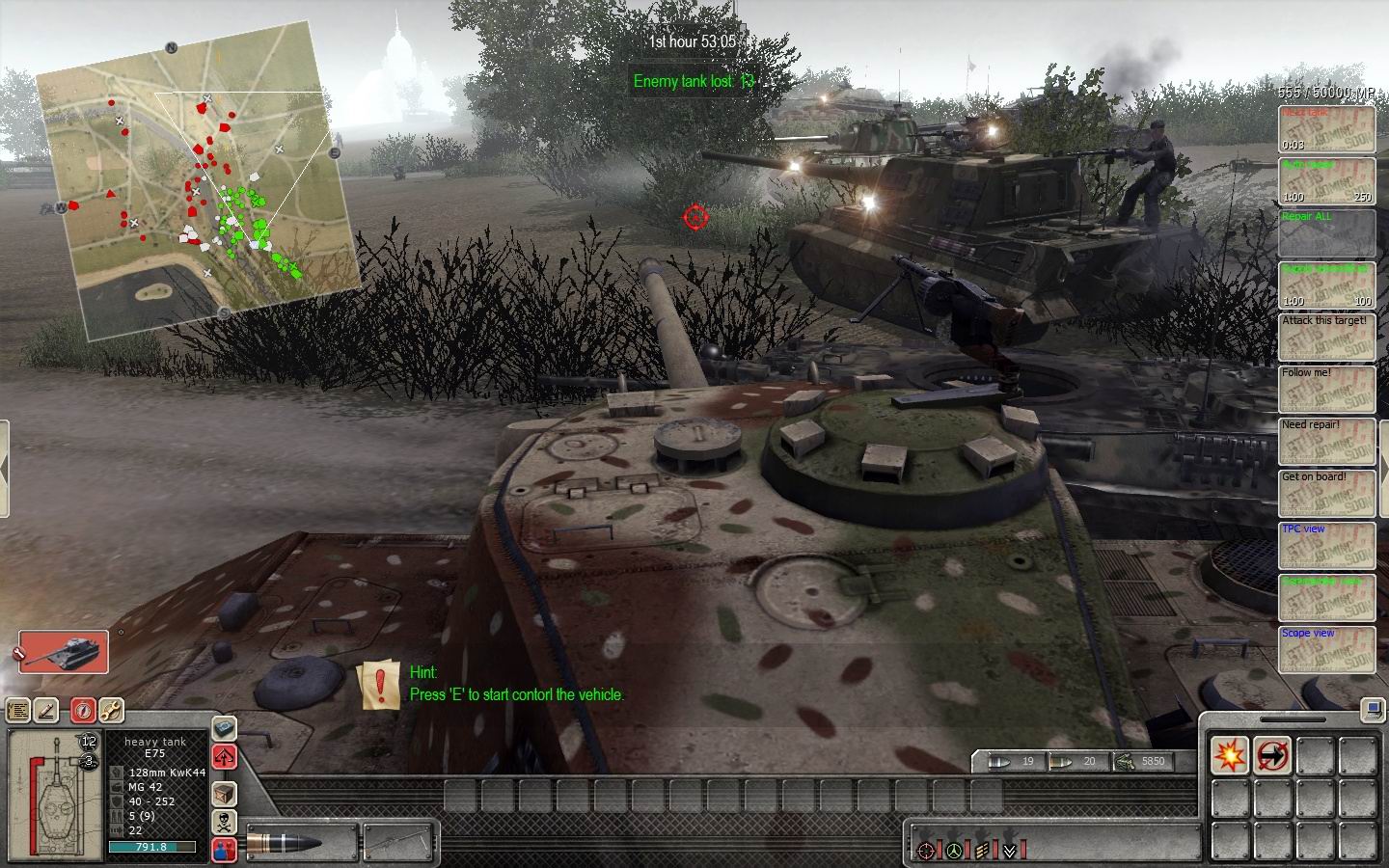 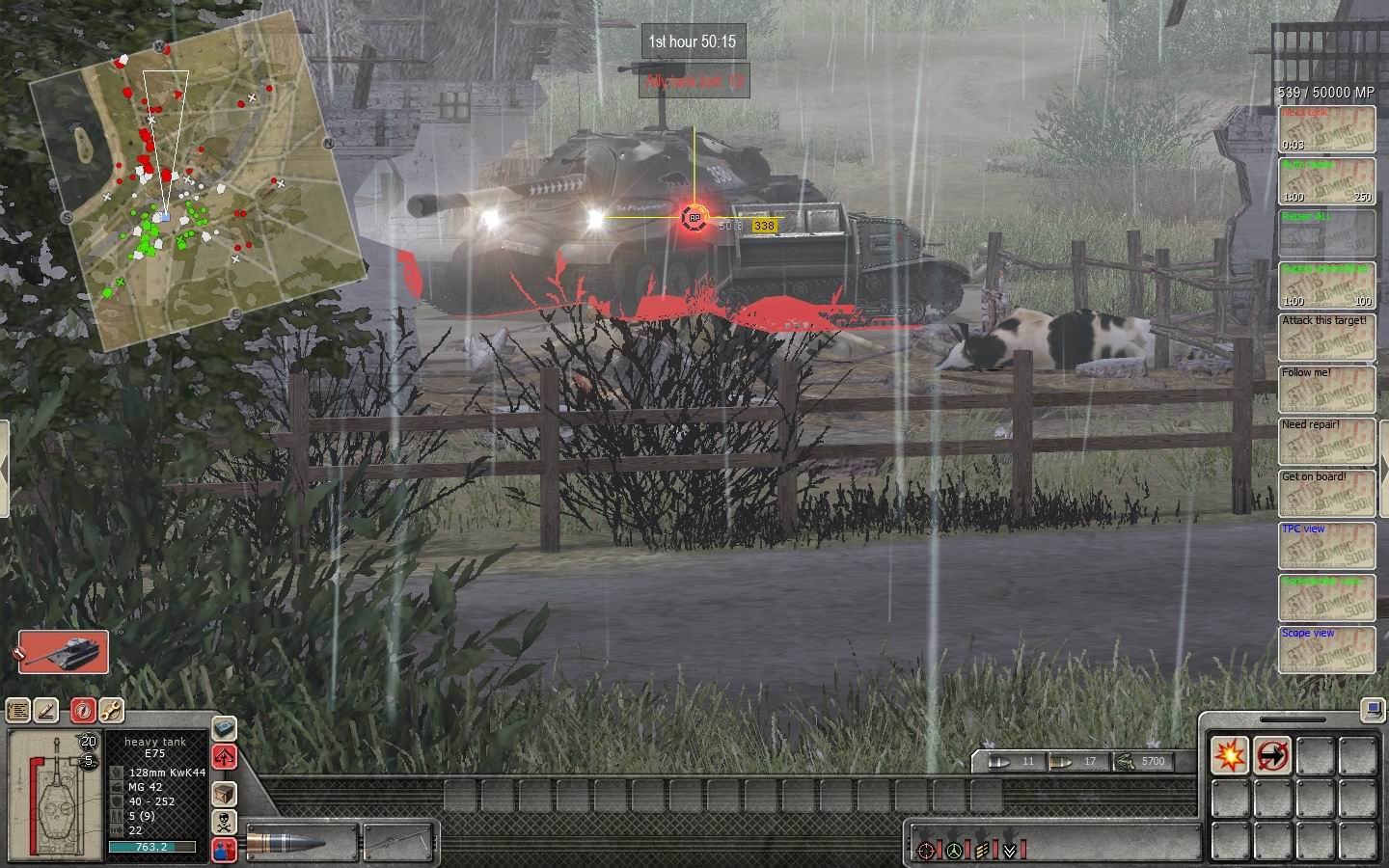 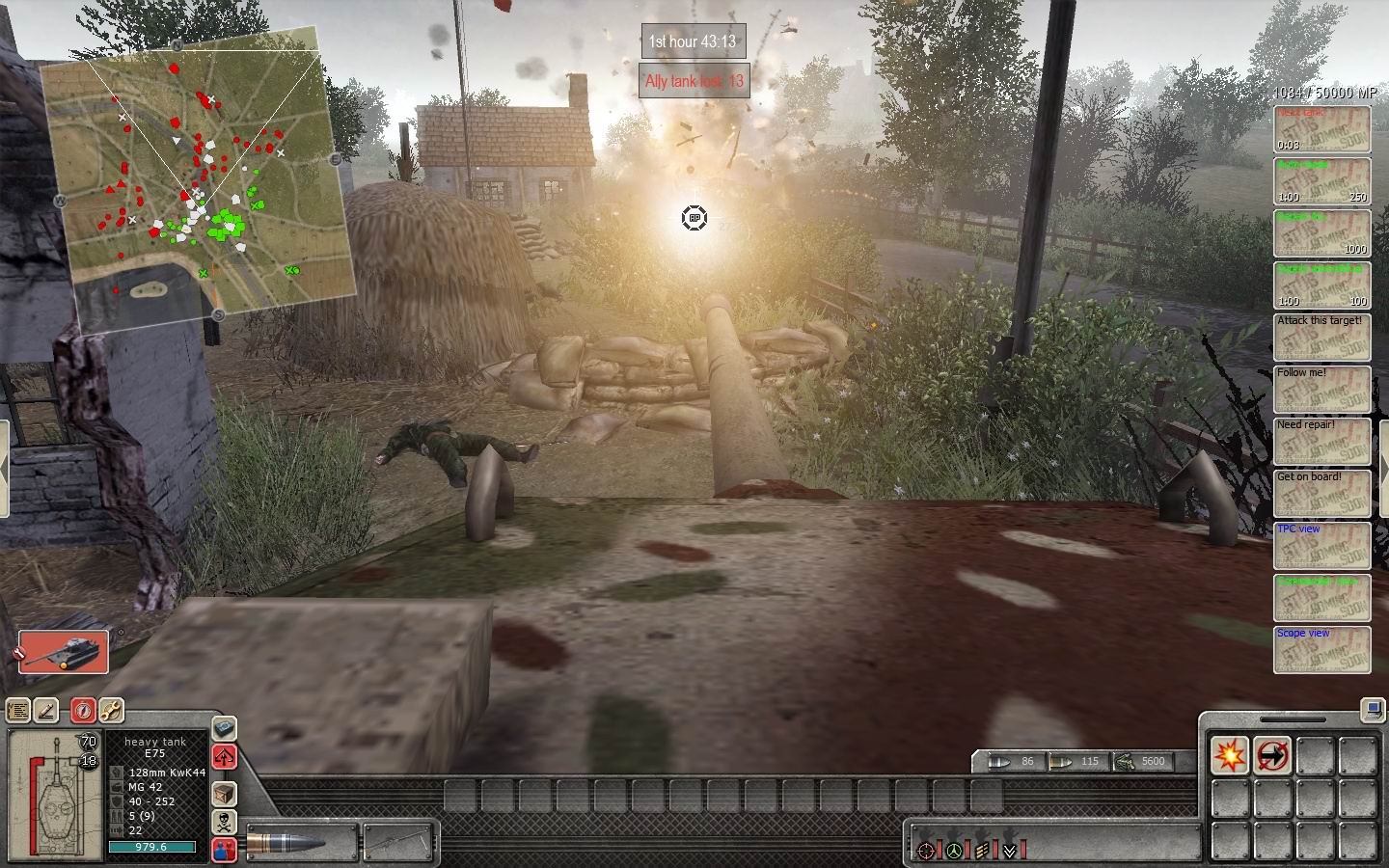 1,make it work for 3.114 (if there won't be a 3.115 soon......),improve the mod systems which we already have,add some new tanks (Object268,Conqueror GC,etc).
2, further parts:it's called terminator for a reason.in fact,this mod is improved from my AS1 Terminator mod which never released except just a few of my friends.And I call it Terminator because it's not just a normal skirmish mod,but with a AI which designed to defeat human players in a fair menpower things,or you can say:my AI and you now both have a tiger tank,and my AI would be very likely to defeat your one with better handle.Of course,my AI is not perfect at every part,so it indeed defeat a lot of my friends,but not alwasys with the ones who learnd fast and soon found out my AI's weakness.
I will input the AI to this AS2 Terminator mod one day,that's when "Terminator is back".

Sth I frogot to say in readme!!!

Very important information I frogot to say in readme.

Can I just ask where I can find those French skins, which are on the images?

-To avoid memory problems, do not have too many items on units inventory, esp supply truck. Best is drop everything after resupplying a unit.
-You can also delete damaged vehicles on the map to reduce load by using "Delete this vehicle".
-Also this game seem to use pagefile after memory reach 3.5gigs, so if you have that disabled in windows, you need to enable it.

Why i cant open game after installing the mod it said
Program will be terminated main loop define not found
(esdlreader.cpp,110) please help me my game version is
3.262.0 someone pls help me fix it i downloaded mowas2 in
Moddb

how can i change the mods version for mowas2?

Why dont you just download the latest version from Steam Workshop instead of playing some old one?

i kindly bought the mowas2 in the version of 3.031.0 beta at the past years

does it work in men of war Assault squad 2 With the version of 3.031.0 beta? Because i've been finding more tank mods in singleplayer compatible with this version, i cant download the v.3112 or higher just because i just forgot my steam account and luckily my mowas2 was still working for my new account and i cant buy mowas2 again cuz im on a hard time saving for that old account to buy mowas2.

This is the way this game should have been from the start. I can't believe someone can make a much better experience with this game then the original company. It has infinite combinations possible. You can play this mod for a few years and never have to play it twice the same way. This mod elevated this game to a whole new level! You can change the weather, the factions you play, the year to start and the year to finish the game (it's important because that determines what kind of weapons and vehicles…