This mod is a team nightmare production.

This mod focuses on making challenging and exiting battles for the player to enjoy, there will also be special Commando mission maps where the player must get through the map and kill a boss at the end, such as a Sith or Jedi, without dying. At the moment the mod is set in the era of the clone wars, and when that is done we will include battles in the era of the galactic civil war. The mod is inspired by Star Wars Battlefront 2 and Star Wars Republic Commando.

Also, sorry this mod has no official site yet just a steam group but we'll try to get one soon!

As this mod is now more heavily based on the famous star wars battles, we felt it is important to make sure we have the key components of star wars, one of them being the epic star wars vehicles such as the spider walker and the clones AT-TE. 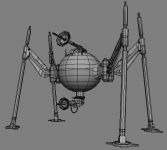 The vehicles in the mod are all going to have interesting sequences and random deaths where they could be rip t in half by a rocket or just shut down and collapse on to helpless troops below. Another element to their deaths are that if the vehicle is heavily damaged you are going to want to get the hell away from it, as you don't know what could happen

Im going to try and get some simulations made within the next 3 weeks so keep your eyes pealed.

When DAK1LL3r5009 first said about have a droideka in the mode the task seemed a bit daunting but some how iv managed to get it this far.

This mod has merged with matts mod team, Team Nightmare, this is really good news!!

This is the first news here for this mod, and just to tell you guys about some of the ideas me and matt have thought of, and to tell you what you guys...

Death is not an option, come on this is star wars! Put the mod in a bacta tank and everything will be all right.

But seriously, an update would be great, this mod has far too much potential to die.

Some one get a defibrillator, this mod needs a revive!

Come on. LET THIS MOD LIVE.

Really hoping that there's an update coming soon. Don't want this mod to die it looks too great

Nice work! I love u