Find out about the upcoming Interregnum Beta release, including the last playable faction, the New Republic.

After many years of hard work, hundreds of hours of testing, and more than a few Sins updates, I am incredibly excited to tell you that we have a date for releasing the first Beta version of Star Wars: Interregnum, complete with the eagerly awaited New Republic faction. For our patient fans, we could not think of a better Star Wars day present for you than to release this update on May 4th! Read on to find out about how this exciting new faction will play. 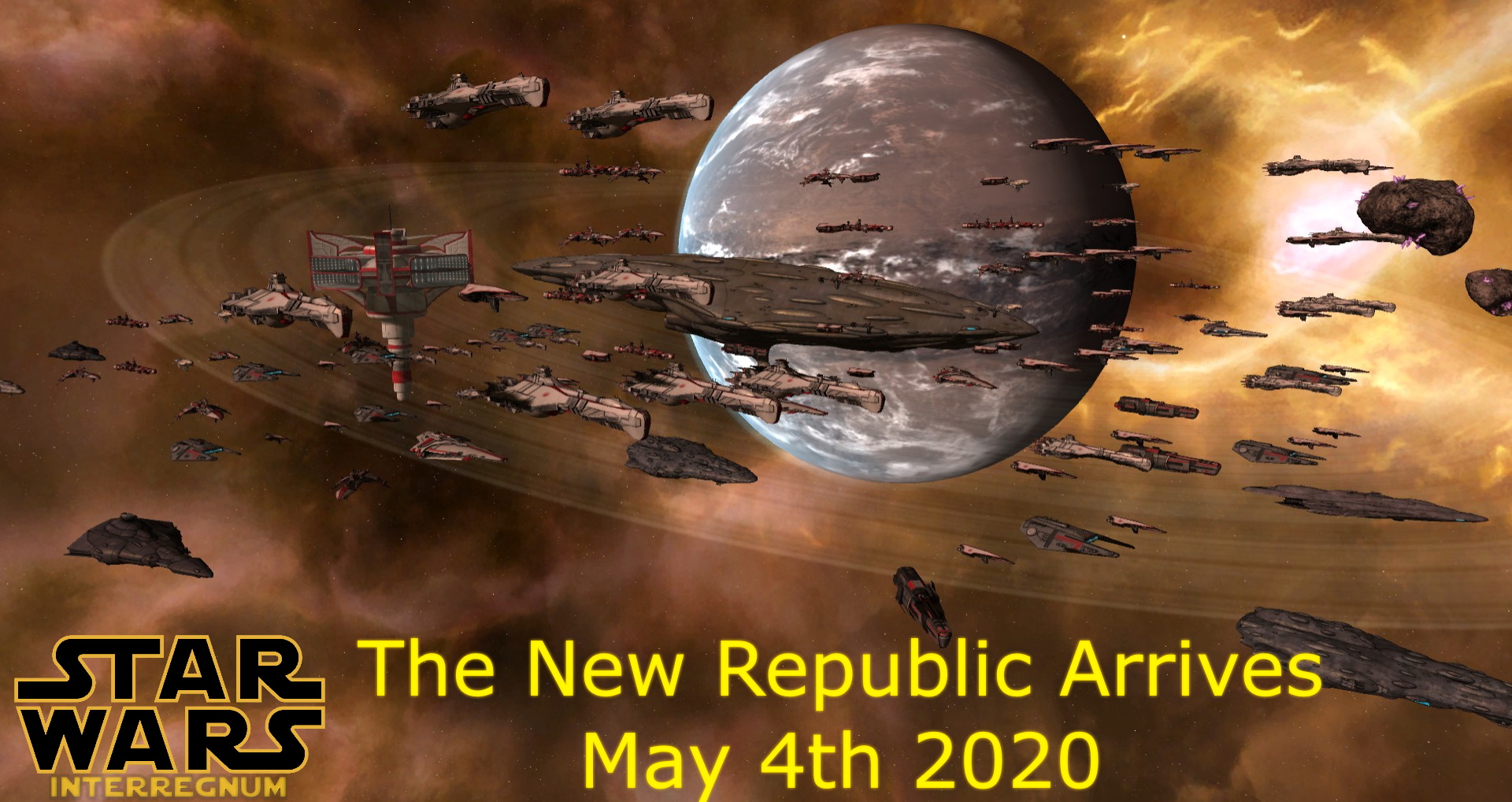 But first, you may be wondering why are we calling this upcoming release a Beta now? In a nutshell, it is because the New Republic is the last of the original core feature to be completed. 8 years ago, I day dreamed and wrote down my ideas for what would become this mod between college classes. That design called for two new races, the Alliance and Empire, each with two subfactions. One would represent these races as we saw them in the Star Wars trilogy, and this gave us the Galactic Empire and Rebel Alliance.The other would represent what these races would become after the Battle of Endor in the Expanded Universe (now known as Legends). With the Warlords and now the New Republic, all of these factions have been completed. In software development, the beta phase of development begins when all the core features are completed, and I am pleased to say we have finally arrived at this point.

While this mod began as my passion project, the New Republic was always going to be the greatest challenge, due to the obscurity and poor sources of their ships compared to the other factions. More than any, this update was only made possible due to the talent, hard work, and dedication of others.

So what exactly can you expect from the New Republic as a faction?

The New Republic is a brand new government made up of worlds who have overthrown the Empire, and seek to bring Freedom and Democracy back to the galaxy. To achieve this goal, the New Republic must establish brand new institutions for both the civilian government and a professional military. To do either is a difficult task - to do both while war consumes the entire galaxy might be almost impossible. Yet the raw potential is there. The skills of the many species of the New Republic, such as the Mon Calamari, Bothans, and Sullustans, gives the New Republic the unique ability to create a new, diverse and powerful fleet quickly. After decades of Imperial rule, many in the galaxy would welcome the return of the Republic, giving them popular support. And by enshrining the rule of law, business in the New Republic is thriving, perhaps to the point of becoming an economic powerhouse.

In game, you the player must help the New Republic develop these institutions. At first, it will be painful. The New Republic does not initially have many ships available, and worse, due to the inexperience of its new military, it suffers significant penalties when operating outside of friendly territory. Yet if they persevere, these shortcomings will be eliminated, and you will have access to a powerful, technologically advanced military backed by competent government, strong culture, and an impressive economy. This makes the New Republic great for players who like to tech up to the end phase of the game, and then create an unstoppable fleet to secure the win.

The development of these institutions is represented in game by two key research lines - the New Class program and the Reorganization line. 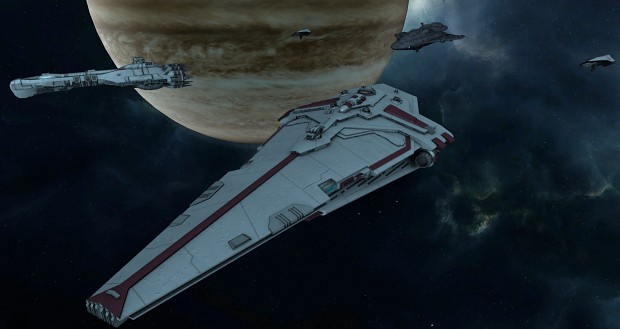 While the Rebellion was forced to make due with whatever ships or weapons they could find, the New Republic quickly realized that this hodgepodge of tech and equipment would be a nightmare to maintain in a professional navy. Instead the New Republic created the New Class program, which sought to create a fleet that would be standardized and efficient. The technology and standards developed for the program would be freely shared with member worlds, allowing the many different shipyards of the New Republic to make vessels and equipment that could easily be maintained, repaired, and supplied.

In game, the vast majority of New Republic ships are unlocked by the New Class program research. There are six technologies representing the different phases of the program, and they alternate between unlocking ships, from the humble Hajen Fleet Tender to the mighty Nebula Star Destroyer, and providing new abilities or upgrades to existing ships. As these techs unlock more than one ability or ship at a time, they are quite expensive, but are key in providing the New Republic a diverse and effective fleet.

While developing the military hardware to defend democracy is important, having it available does not mean it will be used competently. Rather than overhaul the existing Rebel Fleet with new tech, which was already well equipped and experienced in raids and assaults, the New Republic decided to build a new professional navy from scratch. One whose first responsibility was to defend member worlds instead of defeating the Empire. While these new recruits can be expected to perform well at defending their homes, without a developed system of training, logistics, and administration, the new navy will struggle to take the fight to the enemy.

In game, the inexperience of the New Republic’s military is represented by large penalties to damage, armor, and experience points while operating outside of friendly territory. There is no disadvantage whatsoever while fighting at your own planets, but fighting the enemy without the home field advantage is a very risky engagement. This is annoying when expanding against militia, but it is easy to compensate with overwhelming force. Against other players though, it makes any sort of early rush or battle to control key planets extremely difficult to win.

The Reorganization research line allows the New Republic to eliminate this disadvantage. By investing in the institutions needed to field a professional military, this offensive penalty can be reduced and eventually eliminated (unlike the disadvantages of the other Star Wars factions). 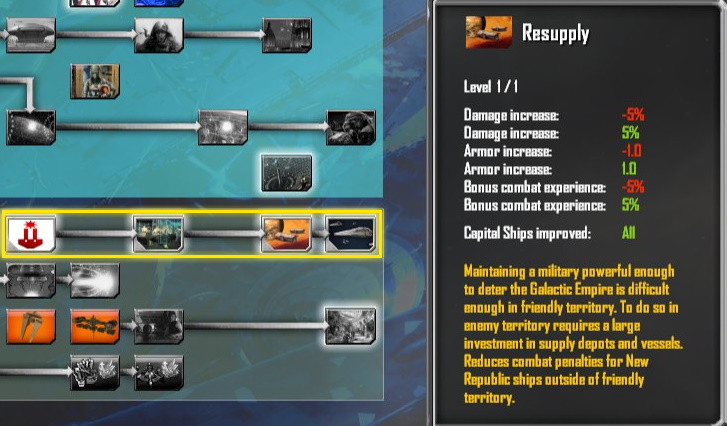 While it will take almost entirely maxed out research facilities, if a New Republic player is able to complete both the New Class and Reorganization research lines, they will certainly be among the most powerful factions in the game.

While the New Republic is less than a month away, keep an eye on this space for more articles about the New Republic and other improvements, including new Minor Factions (DLC Required) and enhancements to the Rebel Alliance.

You know, I'd always hoped that one day there would be a chance to control a New Republic fleet as fleshed out as this, and now that it's nearly here it almost doesn't feel real, but it is!

I can't wait to see what else the New Republic has to offer, they sound like a blast to play, and I can finally have massive battles with Imperial II's and Nebulas going at it, same with the Viscount and Executor.

But above all else, I just want the mod team to know much I truly appreciate their hard work. This project has come along way since the beginning, from the Empire(along with various iconic Imperial warlords) and Sins races at each other's throats to the addition of the Rebel Alliance and even Mandalorians getting a slice of the action. Even in terms of lore the integration of the various factions is pretty much seamless, it's to the point anymore that when I read the lore or see various things in my games my mind doesn't question the Sins races being in the SW galaxy, instead I think "Oh boy, the Triple Alliance and Empire are at it AGAIN...both want this sector so badly!"

Seriously, thank you for all the work you've done, this mod is one of the top Star Wars mods period for me, top five easily. Not only that but it outright enhances the core Sins experience and it makes one of my favorite games ever even better. May the Force be with you all!

Awesome work Goa! So good to hear in the middle of quarantine :3 It's great to see your mod come so far, slowly and steadily. Can't wait for the New Republic!

This is fantastic news.

I've enjoyed this mod since I first found and played it. Well done, all.

great work man, nice to see your dreams come true, thanks for sharing it with all of us :)

More excited over this than the next Star Wars Movie. =)

This playstyle sounds EXACTLY up my alley. Looking forward to it.

Fantastic, cant wait. Will the be a galaxy forge on release or will it be a few weeks later?

It can be out quickly, just bug me to put it out if it doesn't release within a few days of the main release. :)

The older version should work fine unless you need to make maps with extra New Republic ship spawns.

Will the Empire/Warlords be getting any new ships in this release, like the Mandator III, Secutor, Sovereign or the Pellaeon? Although I realise the Pellaeon-class was later.

Short answer: Not this release, just a few new models for existing ships. And for those 4 in particular, definitely or almost certainly not.

In general we're sticking to ships built before the start of the Yuuzhan Vong war. So Pellaeon is right out.

To be honest, I downright despise the Secutor's design, and have no desire to add it.

We're adding the Eclipse in another update, so the Sovereign wouldn't really bring much new to the table.

I don't believe there's any official artwork of the Mandator 3, so I'm not sure what you're exactly asking for here, but its supposed to be quite similar to the Bellator.

Ah it must have been a fan design I saw for the Mandator III, I assumed it was official. Whoopie.

bhahaha regarding the secutor, I can't deny that it is funky as hell but in terms of functionality it is a "solid" design ship wise for a carrier class capital ship. Also, amazing job with the mod and all the work you all have done.

And I hope with this new update the Rebels are more balanced, they are so underpowered, or the Empire is too overpowered...

The Rebels are very strong late game, and they will probably always always have a higher skill ceiling. However, we made a lot of changes to the Rebel's early game that will also be in this update. Hopefully I have time to put an article out about that specifically this weekend.

Will there be Lusankya for New Republic？

No, Lusankya is still in use by Ysanne Isard in this mod. :) However, any faction, including the New Republic, can build Executors if you manage to conquer the Kuat special planet.