The last refugees of the Sins of a Solar Empire Universe, the original Vasari, make a dramatic enterance into the Star Wars universe by annexing one of the last independent powers.

Overlord Jarthulak, a core member of the Vasari Central Command, rose slightly in his chair in the conference room on his personal Vorastra titan as the results of the vote were counted. It had been a year since the wormhole P-38c, the gateway that had brought his people to this new galaxy, had collapsed. From the moment Jarthulak had traveled through the wormhole, he could somehow feel within every fiber of his exoskeleton that they had finally escaped the unknown terror that had pursued his people for over 10,000 years. But the other members of the Central Command were not as convinced; they still had the subtle paranoia that a species inevitably developed after being hunted for millennia. He hoped the trait would not be too much of a liability now that the rules of their existence had changed.

The phantom terror had never been late about destroying Vasari probes, scouts or even fleets before. By all accounts whatever THEY were would have reached the location of P-38c in their old galaxy by now. Yet the numerous probes and a handful of scouts the they had left on this side of the wormhole were all still reporting in. Even the most passionate of skeptics among the Vasari were now beginning to accept that for the first time in known memory, they were safe. “Such an odd feeling for a species to experience together for the first time”, Jarthulak thought.

But this was no time for reflection or savoring the moment. The Vasari exodus had waited for nearly two years on the edge of wild space, making a meek existence out beyond the outer rim while their traitorous kin in the Triple Alliance and their other rivals waged war in the new galaxy. Jarthulak had wanted to join them, but the rest of the Central Command refused to agree until they knew for sure the flight through P-38c had worked. Finally that day had come.

“Fight!” - the vote of the last commander made Jarthulak give a subconscious, sinister grin. He stood up from his chair.

“The motion passes nine to six. Send word to your forces - the time of the Vasari being nomads are over. It is time for our people to return to being warriors and conquerors above all else!”

Right as some of the more impatient central command members were about to get up, Jarthulak raised a finger. “There is one last item on the agenda”, he asserted. “I have arranged a briefing from a senior member of our diplomatic forces. It seems our presence here has come to the attention of one of the minor powers of this new galaxy. They call themselves the... Hutts”.

The name left a slimy aftertaste on Jarthulak's tongue. “It seems the more cowardly among you who kept us here this long may have accidentally given us an advantage. The fighting among our former and future enemies have rather unnerved these Hutts, and they have offered to give us some worlds in their territory in exchange for “protection. These planets of course are near worthless, but I believe the other worlds in their enclave will provide an excellent and easily occupied start for our invasion.” 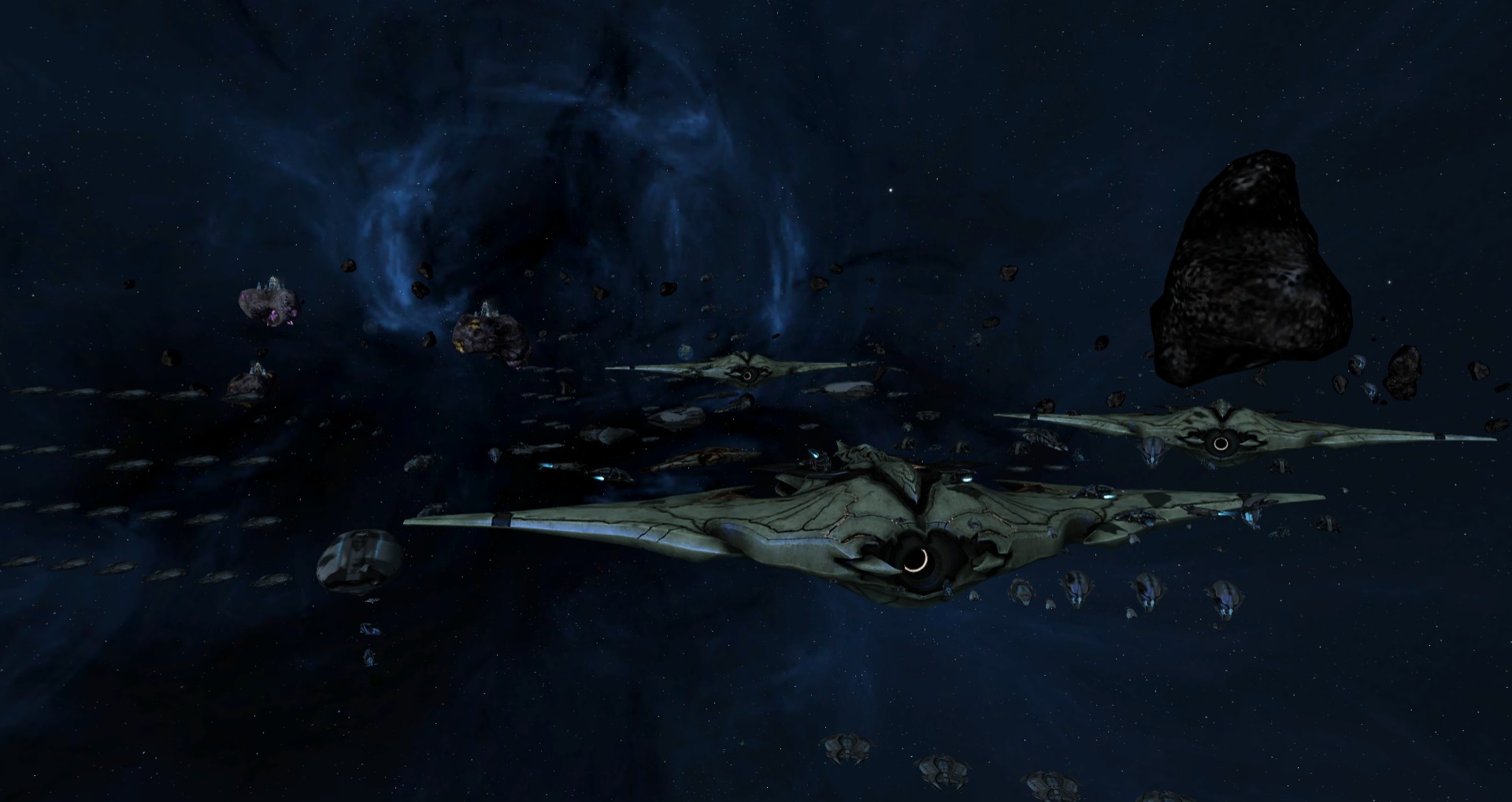 It was an exceptionally rare thing for anyone in the galaxy to feel a sense of pity for the Hutts. By that standard it is quite impressive that many came close when the Vasari occupied Hutt Space in a matter of weeks. Increasingly unnerved by the heavy fighting between the Empire and New Republic on one side of their territory and collapsing forces of Warlord Zsinj and the advancing Advent on the other, the Hutts began to feel boxed in. Some began to wonder which of the many powers around them might invade them first, if only to ensure their enemies didn't beat them to it.

That's when by chance a stray Hutt smuggling ship trying to evade a New Republic patrol stumbled on part of the massing Vasari forces on the edge of the galaxy. Hutt intelligence on the new arrivals was spotty at best, but what was known was that there were six groups at war in the outsiders galaxy. They also knew that the Vasari had been running for thousands of years, and if Hutts know anything, it is how to exploit a desperate refugee population. Nar Shaddaa was a planetary testament to that.

Unfortunately for the Hutts, they vastly underestimated how strong the Vasari military was. The Star Wars galaxy had never seen a nomadic society survive almost entirely without planets, and especially to the Hutts it was incomprehensible that a civilization without a traditional economic base could have real power. Thus the Hutts thought they could hire the outsiders hiding in wild space for cheap protection, and exploit them once they settled like the Evocii and the numerous other victims of Hutt schemes over the years.

But what the Hutts least anticipated was that the Vasari were just as cunning and ruthless as the themselves. Claiming they were accepting the Hutt offer, the Vasari simply flew into Hutt space, then turned around and overwhelmed the Hutt military forces and demanded the Hutts surrender or be obliterated from orbit. With the exception of Nar Shaddaa, every planet in Hutt Space, including Nal Hutta, was locked down as the Vasari began to rule the first worlds of a new Empire, in the proud tradition of their ancestors thousands of years ago. 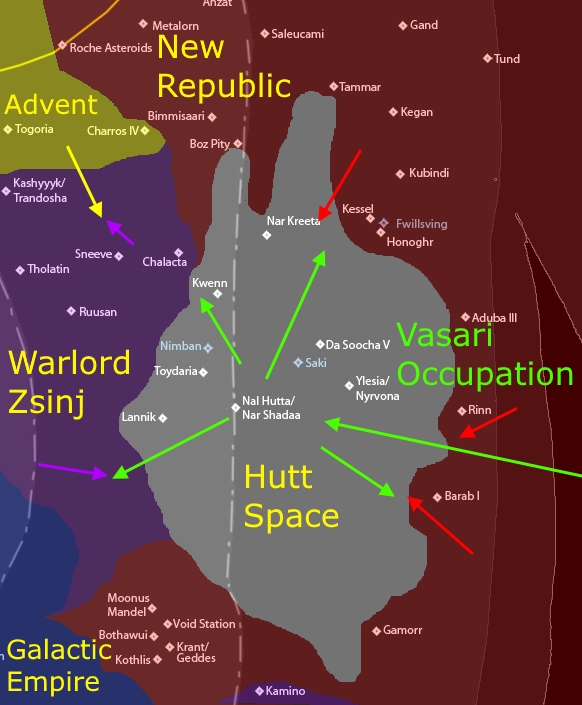 “I will not tolerate a delay in the arrival of our share of new clones”, Boba Fett asserted to a typically smug hologram of Yasanne Isard.

“Be reasonable Manda'lore. You'll get your fair share. Just a little later than expected. After all, you wanted your clones to protect your world from Zsinj. That now seems rather unnecessary, while the latest invaders to our galaxy are on my doorstep” Isard countered.

Fett was unmoved. “You exaggerate. I don't intend to accept any delays caused by your attempts to strengthen your position. If you want Mandalorian trained clones, you will delivery precisely what you agreed.”

Isard didn't even move an eyelash. “Don't forget I control Kamino Manda'lore. We both lose if I am unable to hold my territory. And I believe you still need several shipments of anti-aging formula from me for your fellow Clone War veterans who are training your army. I don't really think you are in a position to bargain.”

“If you'd like to find someone else to train your army, be my guest. I certainly wouldn't trust your stormtroopers though. And if there's anyone in the galaxy as good as the trainers I've lent you, I'd bet they're dead or dying right now” Fett retorted.

Isard gave a slight smile. “I suppose I shouldn't be surprised that you know how to bargain the skills of the best Fett. Perhaps the people of Mandalore did need a Bounty Hunter to lead them. Still, at the end of the day I have what you need and you only have what I want.”

Fett paused a moment, then asked “What if I added a little something extra? I know you're really supplying us so we can help keep your rivals busy. The more the galaxy disintegrates and fights itself, the less attention people are going to give Yasanne Isard.”

“Spies do their best to avoid the center of attention... until they're ready to make a statement anyways.” Isard responded cryptically.

“What if I gave Vader yet another security concern to worry about? Perhaps even another front?” Fett continued.

Isard perked up “That's ambitious even for you Manda'lore. Are you sure your forces are ready for the task? It would have to be a rather big distraction to be worth what your asking for.”

Underneath his helmet, Fett smiled. “It's so big, in fact, I'm going to charge you extra. I'll fill you in next time I'm in the area.”

As he terminated the transmission before Isard could reply, one of Fett's personal guardsmen spoke up. “You know she's trying to play us sir. Why are we working with her?”

Fett turned around and walked past the soldier. “Isard doesn't know how to do anything but play people. We're also playing her. Unlike her however, we also know how to fight. Now get the minister of war in here. We need to send all available repair and scavenging teams to the Raxus expedition. And tell all regiments that they are to only practice boarding exercises until ordered otherwise...” 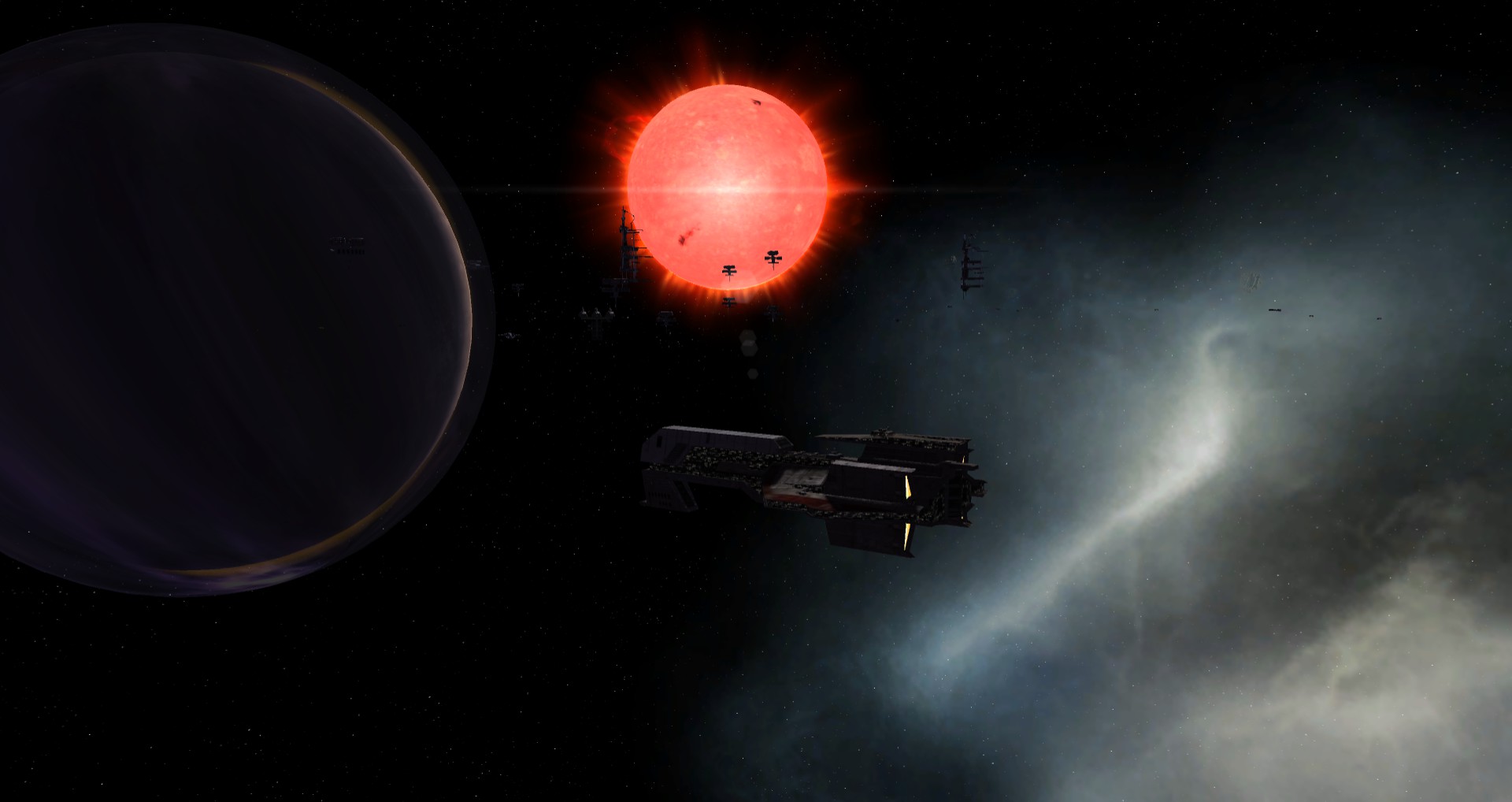 Good read. It's always a pleasant surprise to find one of these in the update box.

excellent, can't wait for the next upgrade hahahahahahaha :D

Finally someone puts the Hutts in their place!

These are the greatest

Boba Fett is working with Yasanne Isard, now that IS a scary combination. It also makes me wonder if there will be some new benefits to allying with Isard in the future... some similar benefits to the HTS perhaps.

Maybe a minor bonus to bounty or something, but probably not the ability to build their ships. :p There'll be other ways for anyone to do that. :-D

These are always awesome, thanks for keeping doing them.

Havent seen any updates in a long time. Getting a bit worried.....

Curious about the lore will there be more? I would like to see more